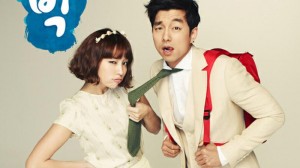 Big: Not as charming as one would assume from this promotional image

ANNA: For this episode of Bringing the Drama, we are going to talk about Big, which is notable because it is the new show from fan favorite creators the Hong sisters and it also features the return to television of Gong Yoo, who was previously so excellent in Coffee Prince. The series is available on Dramafever and Hulu. Big‘s title and plot is a reference to the classic Tom Hanks movie of the 1980s but in execution the show might provoke more flashbacks to Freaky Friday. Gil Da Ran is studying to be a teacher, and her life seems to be going fairly well because she is engaged to be married to a doctor, Seo Yoon Jae. Yoon Jae doesn’t always seem to be able to find the time to spend with Da Ran, and a shady female colleague wants to break the couple up. Da Ran has an encounter with an overly precocious and slightly obnoxious teenager named Kang Kyung Joon. Kyung Joon and Yoon Jae get into a car accident with each other, and when Kyung Joon wakes up, he’s in the older doctor Yoon Jae’s body! Kyung Joon’s teenage body is stuck at the hospital in a lingering coma. What is Da Ran going to do, with a teenage boy in the body of her attractive and reserved fiance?

What were your reactions to the first few episodes?

EVA: I’m getting more and more used to Korean comedies starting off in tragic ways. Unrequited love! Orphaned children! Accidental drowning! What fun. But this one actually is. I completely bought Gong Yoo as both the doctor and the teenager (in fact, it took me until about halfway through episode three before I gasped and shouted at the computer, “It’s that guy from Coffee Prince!”) and Lee Min Jung’s reactions to both versions of Gong Yoo’s character is convincing. I’m impressed at how well the two actors are pulling this off.

EMILY: The first thing I noticed about Big is that it has a different feel than the other Hong sisters dramas I’ve seen. They usually go for the screwball comedy right from the get-go (just look at the beginning of You’re Beautiful) but this time they went with a more serious first episode. There were hints of humor, but in general, episode 1 plays things straight and sets up the premise of the story. Things start to get funnier in episode 2, but even then, it feels a bit toned down.

I like Gong Yoo in pretty much everything I’ve seen him in. Really, he could just sit there and read the phone book, and I’d probably tune in. In this drama, he faces the challenge of playing two characters- the adult doctor, Yoon Jae, and the teenager-trapped-in-an-adult-body, Kyung Joon. We don’t really get to see him in his role of Yoon Jae for very long, so it’s difficult to get a handle on the character. When he starts acting as Kyung Joon, he really lights up. I think he does fall into that trap, at first, of acting TOO childish, when trying to act like a teen, but he gets over it quickly and settles into the role.

I’m somewhat disappointed in the heroine, Gil Da Ran. She seems like such a cliched naive Kdrama heroine. I like how she acts around her younger brother- feisty and in charge- but everywhere else, she seems to have some doormat tendencies. While she isn’t quite as blindingly naive as Minam was in You’re Beautiful, she still scores high on the unbelievably-innocent scale. I have no problem with the actress playing her; it’s the character that feels a bit weak.

I love Da Ran’s family. They have a wonderful dynamic, one that almost mirrors the situation Da Ran will eventually face. Da Ran’s father is about 12 years older at least than her mom. In fact, they were teacher-student. Yet in spite of the age difference, and lots of parental drama they hint at, they have a successful and loving marriage. Something for Da Ran to keep in mind, perhaps, as she will no doubt become confused by the presence of Kyung Joon’s soul in her fiance’s body.

Thank you, Hong sisters, for all those bare-chested-post-army-body-fanservice scenes of Gong Yoo :) 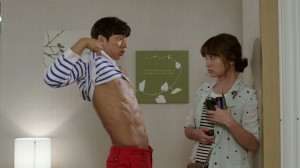 One of the better things about Big: Gong Yoo and his abs

NANCY: I’m about eight episodes into the drama now, and I still don’t know what to make of it. It is not “Big,” for those who care about those kind of things. I would call it…a half-assed Secret Garden. Harsh, but…true.

I agree with Emily that Gong Yoo acts too childish for a 17-year-old (18 in Korea), and to top it off, his acting in no way resembles how Shin Won-Ho (the “real” Kyung Joon) interpreted the character. Kyung Joon is treated as such a child by Gil Da Ran that it’s impossible to view him as a romantic interest for her. So then is Yoon Jae her romantic interest? But he’s never around, so we have no idea what he’s like. It’s great that the viewer is unsure about Yoon Jae’s true feelings just as Gil Da Ran is—that is what makes the plot interesting—but it doesn’t work beyond that.

This is a romantic comedy without the romantic comedy. There is no couple to root for. I have no idea where this drama is going, and I feel like the drama itself doesn’t know where it’s going either.

EVA: See, here’s where it shows that I’m the noob here: I have no idea what Secret Garden is. But, yeah, this is nothing like Big and kinda-sorta like Freaky Friday.

It’s also clear that I’m (at least with this show) willing to cut the actors more slack than Emily and Nancy are. Yeah, Gong Yoo isn’t portraying the Kyung Joon character the same way Shin Won Ho did. But I was having so much fun with the character the way he decided to play it that I didn’t care. Heh.

ANNA: Actually having no idea where the show will go is mainly what appeals to me for this drama. Being unsure of which couple to root for actually seems somewhat refreshing. I’m sure that there will be a happy ending, but right now I’m not sure what to expect. I honestly am not sure if Gil Da Ran would be better off with Kyung Joon in in Yoon Jae’s body or the real Yoon Jae. She seems to have built much more of a solid friendship and companionship with Kyung Joon, even though she does treat him like a little kid. She really didn’t know Yoon Jae very well, despite being engaged to him. I agree that Gong Yoo’s frenetic little kid act settles down a bit a few episodes in. I’m afraid I’m too much of a fangirl to be all that critical of Gong Yoo’s performance or interpretation of the character, because he’s just so appealing as a lead character.

I feel like I have to give a shout out to Jang Ma-Ri, Kyung Joon’s ex-girlfriend who shows up and quickly suspects that something is wrong. She’s basically like The Terminator with ridiculous hair fashion accessories, and she injects a comedic element into the series that is definitely needed. 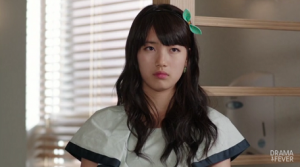 NANCY: I agree that Suzy as Ma-Ri is a great addition to the series! At first her interpretation of what is basically a sasaeng (crazy stalkers of kpop idols) scared the hell out of me. But once she stops acting like a freak, we see a loyal person who is trying to right a past wrong. She’s charming, and I also feel for Da-Ran’s brother.

Basically I’d like this series a lot more if Yoon Jae would just wake up to fix the plodding pace of this drama. :p

EVA: Ma-Ri is awesome. Once we got past the crazy stalker stage she became, fittingly, the most American of the characters — no noble idiot here. If she wants something she goes for it and damn the consequences. She may be incredibly annoying to the rest of the characters, but to me she’s a breath of fresh air.

I’m still only seven episodes in, so hearing that the show turns plodding is not good news. Emily, is there hope for a turn-around?

EMILY: I finished the series this week, and was extremely disappointed with it. I still love Gong Yoo, and think he did a fantastic job with what he was given, but the writers really dropped the ball here. They just went in circles for so many episodes. There were so many pointless scenes. Heck, all of episode 15 is a waste of time. Even Ma-ri becaume a useless plot contrivance in the last episode- I can’t believe she got away with what she did, good grief. I also can’t believe this is a Hong Sisters Drama. I really enjoyed so many of their other shows (You’re Beautiful, Greatest Love, My Girlfriend is a Gumiho, etc) that I can’t understand what they were thinking when they came up with this series. I am usually very easy to please, but in this case, I was just left scratching my head and wondering what the hell I just watched. *sigh*

Still, this has been a good year for dramas over all. I LOVED Queen In-Hyun’s Man, I’m still enjoying A Gentleman’s Dignity (in spite of 1 episode of stupidity, the rest of it has been pretty solid), and there are a bunch of new shows coming that look like they will be fun. That’s the nice thing about the Korean and Japanese TV systems- if you don’t like a show, just wait 3 months, and a whole new crop of shows will start :D

ANNA: Oh, I was hoping it would get better by the end! I was stalled out at episode 10, but I was thinking that the Hong Sisters would somehow be able to pull off the show. My tastes in drama generally tend to synch up with yours, do you think the show is worth finishing, or should I switch over to A Gentleman’s Dignity for more satisfying drama watching?

EMILY: Personally, I would switch. Apparently, the Big ending was a let down to a LOT of people, judging from the flurry of blog posts I am seeing today. Granted, it’s not the worst ending I have ever seen in a drama (that honor goes to the K-drama “Let’s Go To School, Sang-Doo” and the J-drama “Cheap Love”) but it is extremely weak and leaves lots of questions. And important events happen off screen. So annoying.

ANNA: How quickly my excitement over a new Hong Sisters’ drama has turned into crushing despair! If we aren’t going to recommend that people watch this one, what should people watch instead? Coffee Prince, to experience the glory of Gong Yoo in a series with much better writing? Secret Garden, if people are looking for a series about body switching that is less maddening? 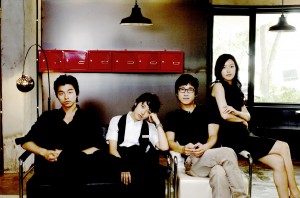 At least we can all cherish our memories of Coffee Prince!