If anyone hasn’t already noticed that One Piece is my favorite manga series of all time, then my upcoming Alabasta Arc special will put any doubts to rest. For now, allow me to focus on discussing the treatment of fighting scenes in One Piece in general, before I get into details later on.

One Piece‘s strength lies in a large variety of different powers. While early on in the series it had to rely on characters with different fighting styles, once the story entered the Grand Line the Devil Fruit powers were expanded upon. The basic idea behind this power is that anyone who eats one of the devil fruits will gain a power tied to the fruit, but lose the ability to swim.

Examples of powers include a body made of rubber, a body that can split apart, the ability to turn into animals, and the ability to turn into any of the classic (and some not classic) elements, such as fire, ice, smoke, etc. Each of these powers bring very different fighting styles to the table, while the powers all originate from the same place, taking care of the problem of having too many different magic systems, or not enough variety to make the fights interesting. It’s a tough line to walk, but One Piece manages to pull it off beautifully. 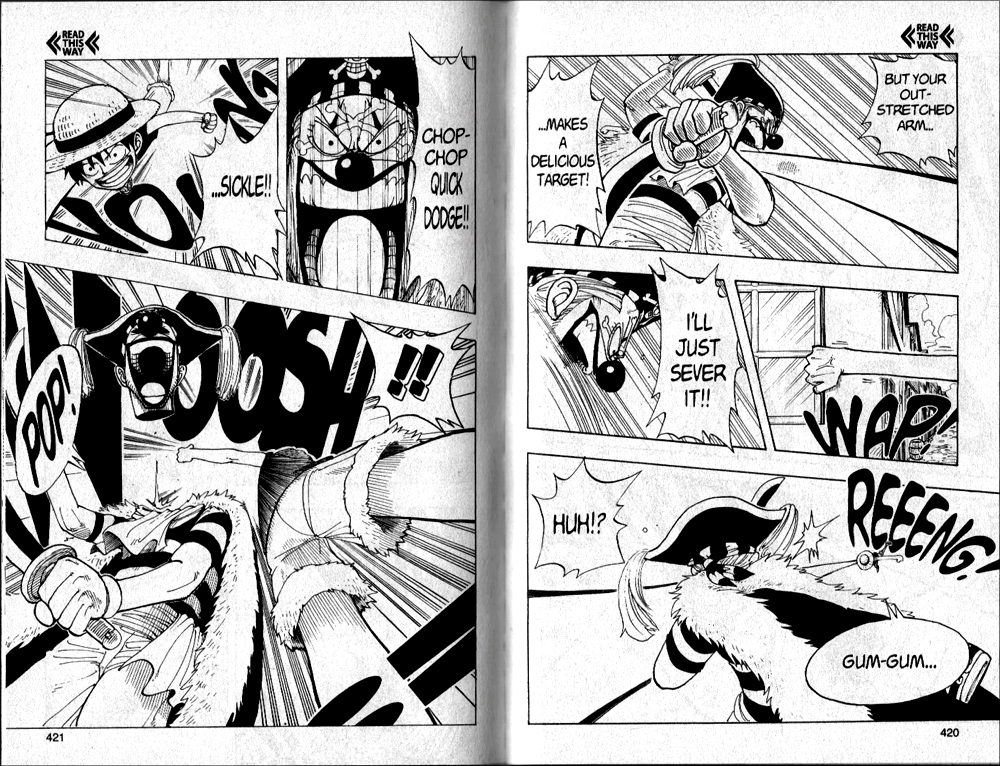 Accompanying the devil fruit powers are several different fighting styles as well, but they all fit inside the same world. The introduction of Haki is a bit of a concession to the tropes of shonen fighter manga, but it fits into the world Oda created as a whole.

Thanks to these varied powers the fights are not only creative, they can be tense or humorous when necessary. The writing is just top notch, some of the best in the genre. Some series suffer from boring uninteresting fights, One Piece does not have that problem. The fights themselves are what make the manga good, along with other things.

Best of all, the entire cast gets their time to shine. While there is a bit of an emphasis on the men in the main cast, this being a comic for boys, as Oda likes to remind people, the women do still get their moments. In fact, as far as representation of women in shonen manga go, One Piece is one of the best at avoiding allocating its female characters into one-note roles.

But even when I love something so much I will tolerate no ill word spoken about it, I cannot deny that nothing is perfect. Especially in recent arcs One Piece hasn’t had any really strong fights. Or at least it hasn’t had any fights that match the grandeur of past arcs. Most of the fights have been cut somewhat short, and while that works for the story, it does show that Oda has not been as creative with his fights as he was in the past. Nami and Robin have gotten the shaft as well, while before they played big parts in the climactic fights, this time around they stood off to the side and did not get their own opponents to fight. While this is the first arc after the crew got back together, it is still a little disappointing to see after such a strong track record.

The only other main complaint I have about the fights in One Piece is that powerups come out of nowhere. While we do have a two year timeskip to explain where the characters gained their new powers, in the past they’ve pulled new abilities out of nowhere without proper explanation. The biggest examples of this is during the Enies Lobby arc, where Luffy, Zoro, and Sanji each have new final attacks, without any sign that they’d been training or practicing to use these moves. I hate to make the comparison, but I’m reminded of the Uchiha characters in Naruto, each pulling out brand new powers without any indication that they’d been training to unlock these abilities.

But while I will continue to complain about Kishimoto, Oda gets a pass, because every single one of those moments in Enies Lobby was pure awesome. When a manga has so much substance, it can be forgiven for a few moments where style rules supreme. Especially when the rule of cool is applied so hard that it takes several years before you start thinking, “Hey wait a minute…”

In the end, even my complaints don’t add up to much. One Piece is just one of those series that is fun on all levels, but most importantly the fights are just amazing. And while Oda has not yet wowed me with his most recent fights, I have every bit of faith that it’s just a matter of time before I get to see something amazing.