You know what the most disappointing thing is about Naruto?

It’s not the story that’s stagnated to the point of resembling a soap opera that’s passed its prime. Neither is it the considerably large female cast that gets absolutely no focus. Nor is it the fact that Kishimoto insists on focusing on the one character more mind-numbingly awful than the actual protagonist.

No, it’s that Naruto used to be good.

That isn’t to say that Naruto can’t be enjoyed by a very particular breed of person, but when considering the first three volumes of the manga I can’t help but wonder: What the heck happened?

As far as shounen fighters go, Naruto was something of a godsend in its early days. Rather than focus on two muscley men punching each other to death, Naruto had the audacity to focus on preteen children punching each other to death. With magic! And as anyone who has spent an extended amount of time around children can attest, this is an incredibly cathartic experience.

Rather than the admittedly much simpler, “Guy A punches Guy B very hard” repeated ad nauseum, Naruto instead had fights that were more about strategy and trickery. This led to a variety of intelligent ways in which Guy A could halt Guy B’s vital functions. Even with the addition of magic powers (Kishimoto can call it “chakra” and “chi” or whatever he wants, one’s inner energy does not give one the ability to shoot fireballs with one’s eyes!) Naruto remained intelligent and fast moving—a battle manga for the intellectual. Sort of. 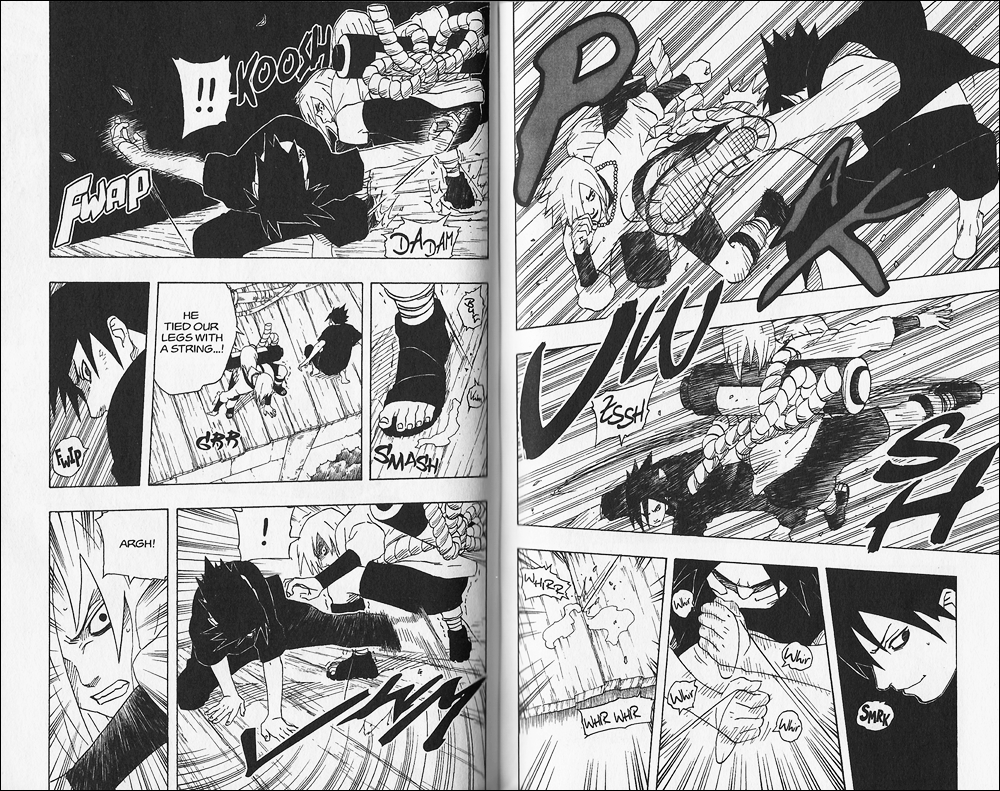 But somewhere along the line Naruto lost its way. Focus was placed on the magic, rather than the clever ninja fighting techniques. Fights became longer and more repetitive. The biggest problem was the grave misuse of the sharingan powers. Rather than be satisfied with just two powers, Kishimoto decided at some point the sharingan needed to be so powerful that it made every other technique obsolete.

It’s a problem of escalation really. Dragon Ball experienced the same problem. After you introduce a villain that can destroy a planet, where do you go from there? By introducing a villain that can destroy planets—only he does it harder! The problem is found in most battle manga, and is a curse of the way in which manga is published. If a manga is clever and engaging then the readers will connect with it. And when they connect with it they want more. And when the readers want more the publishers squeeze the creator for everything he or she has, even if the creator’s best ideas dried out a long time ago.

It would be easy to dismiss Naruto as one of those comics that outstayed its welcome. The problem is that not only has Kishimoto never shown any signs of being close to done, but he’s single handedly responsibly for the downgrade in quality. Just like he decided Sasuke was the most engaging character anyone would want to read about, so he decided that magic eyeballs were the way of the future. 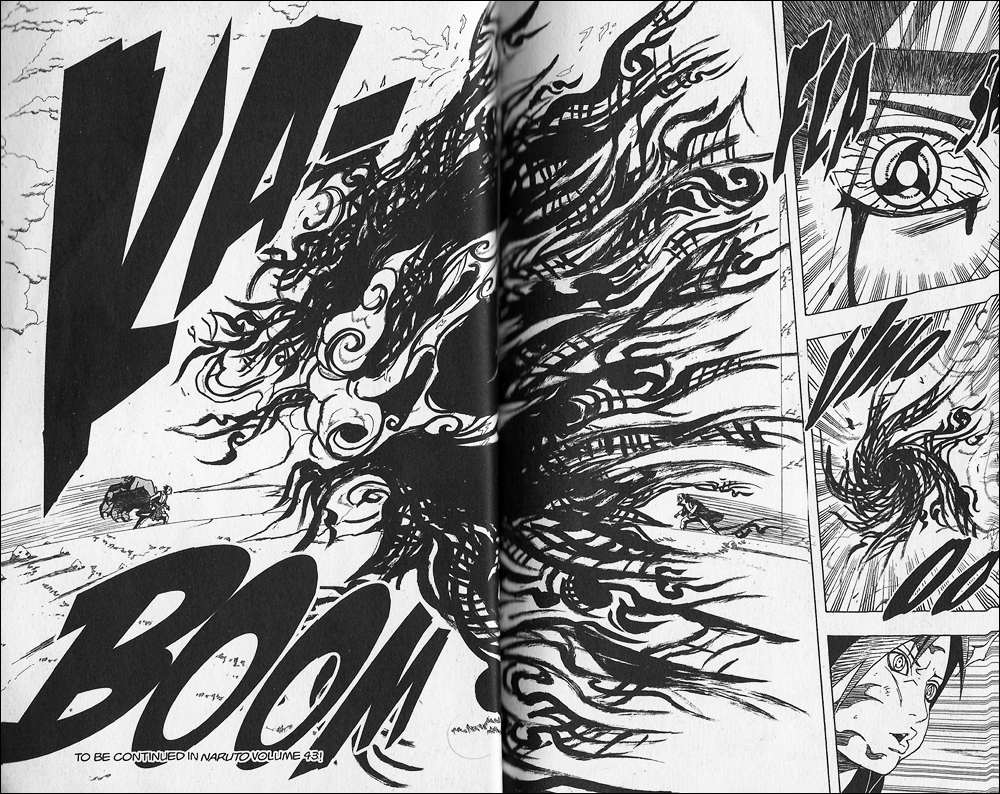 One of Kishimoto’s signature stylistic choices was having diagrams describing what happened in the action scene, as a kind of recap or to explain new techniques. I was never a fan of this, as it broke the flow of the story in favor of presenting information with more tedium than my entire undergrad program. For a while Kishimoto abandoned this—one of the only good decisions he’s made in the past few years I’d say. But as those who have been reading Weekly Shonen Jump Alpha know, Kishimoto recently brought that particular feature back—to describe yet another inane sharingan power. It’s as if Kishimoto realizes he doesn’t have that spark anymore, and so he’s reaching back to the early days of his manga. A note to the wise, perhaps try bringing back the engaging parts of your manga, not the one lousy thing that should have stayed buried. 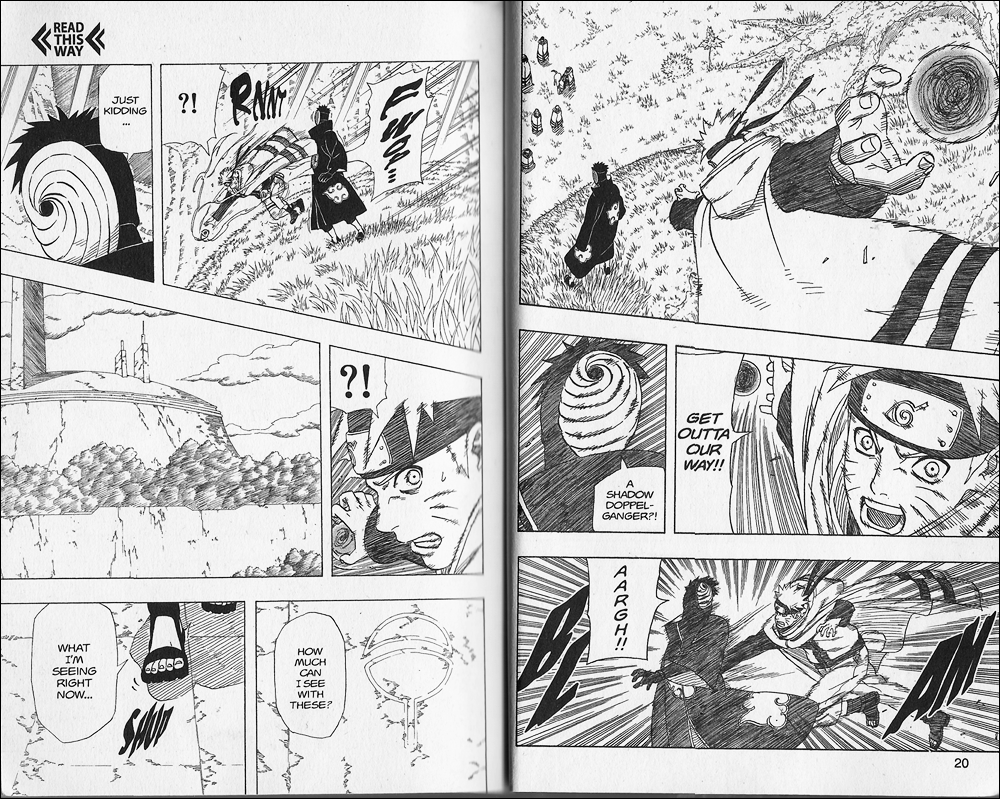 As easy as it is to complain but not provide a solution to the problem, I’m afraid it’s too late for Naruto. The escalation has gone too far. Characters are capable of leveling mountains now—going back to throwing shuriken just won’t work. Which begs the question, why do they still bother carrying the things?

While I’m sure there are still those who read and enjoy the series, I for one have long since abandoned it to that depressing part of my mind where good manga go to stagnate. It seems that’s been happening far too often with current ongoing shounen manga. Bakuman had the right idea and got out while the getting was good.

My current negative opinion of the series isn’t going to stop me from reviewing later fights in, for some, excruciating detail. Please stay tuned, unless you like Naruto—might be a good idea to avoid those future reviews.