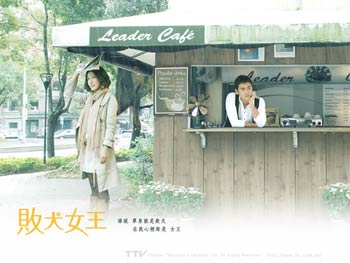 My Queen is a 2009 idol drama. For an explanation of the meaning of the Mandarin title Bài Quǎn Nǚwáng check out Jade’s post at Wai-Taiwan.

So, Shan Wushuang is a hard-working journalist who, at the age of 33, is … single. Actually, “Shan” can also be read as “dan,” which means single, and “wushuang” means “not in a couple,” so her name pretty much means “SINGLE!!!!!!” in Mandarin. At work, she overhears her co-wokers make snide remarks about how men don’t want her because she is so career-oriented. Meanwhile, there is a handsome man, Lucas, who works odd jobs. Through a series of ridiculous events related to her job, Shan causes Lucas to lose the pay for one of his gigs, which means that Lucas can’t pay his rent. Understandably, Lucas is pissed off at Shan.

Shan feels bad about causing Lucas to lose the money he needs to pay rent, so she lets him stay at her place. She sees having a handsome man in her apartment as an opportunity, so she puts on her sexiest dress and tells him that she won’t let him refuse her. He does not, in fact, refuse her, but being a responsible person, he wants to fetch a condom before things go too far. While he’s searching for his condom, Shan sees the birthdate on his ID card … and realizes that he is 8 years younger than she is! That’s it for her—she does not want to get in bed with a man 8 years younger than she—which is pretty frustrating to Lucas.

Oh, and then Lucas get a new job … at Shan’s company.

This is of course just the beginning of the story (and I didn’t even talk about Shan’s big scoop), but it should be pretty clear that this is a romance between Shan and Lucas, and that the major obstacles are a) Shan’s reluctance to date a younger man and b) Lucas’ propensity to get irritated by Shan (often due to misunderstandings).

The idol drama and Taiwanese tourism industries are aware of their symbiotic relationship. Idol dramas are mostly shot in Taiwan*mdash;filming abroad is rather expensive—but since idol dramas are mostly escapist, they try to find locations which allow viewers to get their minds off of their everyday lives. Sometimes they even try to sell a drama based on the location. For example, there is an idol drama called Love in Alishan (Alishan is one of the most visited tourist spots in Taiwan). Likewise, tourism companies try to use idol dramas for their own benefit. A tour operator I talked to said that they try to get the places where they offer tours shown on TV so that “everybody knows how beautiful Taiwan is” (and of course to get more business). Taiwanese tourism bureaus offer brochures based on idol dramas, and I have seen one travel book dedicated entirely to locations shown in idol dramas.

There are also some scenes shot in what I think is Miyuewan (Honeymoon Bay) in Yilan County, though I have not confirmed this. Miyuewan is one of the most popular spots for surfing in Taiwan. One of my guidebooks claims that Miyuewan has a nickname among the locals, “Killer Bay.” This is supposedly because some fatal accidents happened there. In the story of My Queen, somebody does die there.

What I Liked and Disliked

These are the parts of the story I liked the most 1) whenever Shan used sneaky tricks for the sake of her job 2) whenever Shan and Lucas engaged in silly activities or witty banter with each other. In short, I liked My Queen when it acted like a romantic comedy.

As a romantic comedy, it works quite well—Shan and Lucas are very good foils for each other. Shan is overall a very serious person, but she lengths she goes to in order to fulfill her journalistic duties are quite funny. Her boss’ attitude—that she is the jewel of the company who must be protected so she can keep on getting the best scoops—is also amusing. Lucas, on the other hand, has a sense of humor, and while Shan’s attention is often very focused, Lucas is more broad-minded. This turns out to be pretty fertile ground for friction and sparks between the two. At the same time, it’s clear that they are good for each other. Lucas helps Shan chill out and make work just one part of her life instead of the overwhelming totality her life, whereas Shan helps Lucas focus on getting his own life together.

What did I dislike? Mainly, I disliked most of the parts where it did not act like a romantic comedy.

For example, one of my least favorite scenes is (trigger warning) the attempted rape scene. This was not because it was an attempted rape scene per se. For example, The Outsiders has a rape scene. But The Outsiders is a dark drama which, among other things, has women who are kidnapped, pushed into sexual slavery, and forced to take strong recreational drugs so they are dependent on their captors for their next fix. A rape scene fits thematically in The Outsiders. A rape scene—even just an attempted rape scene—does not fit thematically in My Queen. What’s worse, shortly after the scene happens, the victim recovers very quickly and it does not seem to affect her very much. The scene was so brutal that it should have had some tangible effect on her for the duration of the drama. But really, the scene just should not have been there in the first place.

I also generally disliked the subplot around Shan’s fiancé. I recognize that the drama needed to let Shan show some vulnerability, that the story needs some gravitas, and that, this being an idol drama, she needs to have a romantic alternative to Lucas. But for some reason, this subplot rubbed me the wrong way. I’m not sure why. Maybe I just did not like the fiancé.

That said, I did not always dislike it when My Queen played it straight. After all, the best comedies have some seriousness. However, I liked the serious parts best when they were well-connected to Shan and Lucas’ relationship and foibles. For example, I liked the arc where Lucas is accused of a committing murder and Shan has to use her journalistic prowess to clear his name.

One of the reasons I was interested in this drama is that it supposedly discusses feminism. In the first draft of this post, I talked about how the show failed to meet my expectations on this matter. But I was disappointed because I had forgotten this is an idol drama.

This is escapist entertainment shown late at night on TV when people are tired. This is not where cultural attitudes get challenged. This is where you see how the culture has already changed.

Even though the age gap felt more like a gimmick to me than a launching point for serious examination of Taiwanese notions of age, gender, and romance … the fact that an idol show would have the main couple be a woman and a man 8 years her junior shows that Taiwanese culture is changing. And Shan’s mother gets to pursue romance herself—it’s played for laughs, but it is still very unusual to see a woman her age to find new romance in an idol drama. And while Lucas does turn out to be the son of a man with a lot of power and influence, at least Shan is not economically dependent on his family and she does not play his Cinderella.

My feelings about this drama are mixed. Some parts are very entertaining … and some parts fell flat for me. I think I would have had a better attitude about this drama if I had entered it with lower expectations. However, people in North and South America can try this drama for free. If that is you, I recommend trying this drama to see if it hits your spot.

Next week: Special Tuesday-Friday Double Feature about a Really Popular Wuxia Novel That Was Not Written by Jin Yong

Sara K. has a love-hate relationship with idol dramas. On the one hand, they have jaded her by recycling the same plot over and over again. On the other hand, they still make her laugh, and, when she’s caught off guard, make her cry. She keeps on telling herself that she’ll quit idol dramas after she has finished drama X, or at least take a long hiatus … and then she picks up another one at the DVD rental shop.