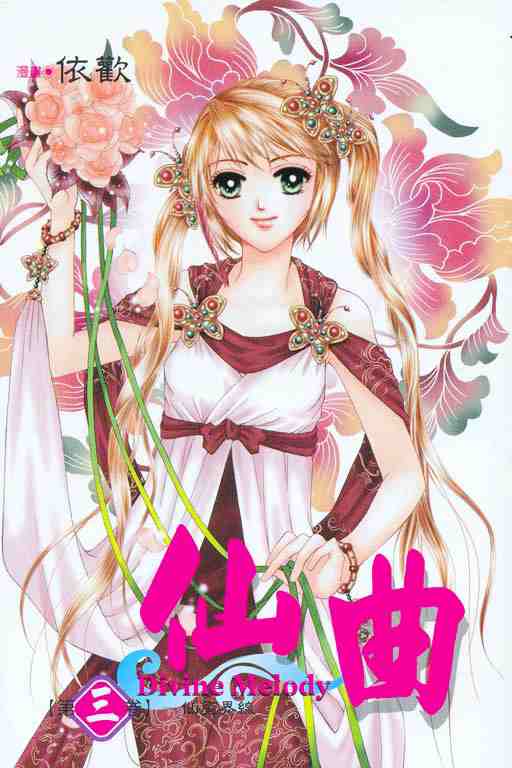 This is going to seem weird and complicated, but take my word for it, this all makes sense when you read the manhua itself.

The story starts with a tribe of húli jīng, which means “fox spirits.” These fox spirits were born as ordinary foxes, but by magic they had been transformed into yāoguài. If that seems similar to the word ‘yōkai’, it’s because the Japanese borrowed the word from Chinese. The fox spirits now have the shape of beautiful human maidens and a lifespan of 500 years. But after 500 years, they will disappear. For this reason, they want to have children so that their tribe will last forever. Yet … they are all female, which makes reproduction a little tricky. If they use human males as studs, their children will only have a human lifespan. However, they have a special child in their care—Qin Caisheng, a fox spirit with xiān blood (xiān, is usually translated into English as “fairy” or “celestial,” but since this manhua is based on Chinese, not European, mythology, I am going to stick with the word “xiān“). Qin Caisheng is currently a girl, but in 200 years will have the ability to change between female and male forms (from this point forward, I am going to refer to Qin Caisheng with the pronouns “ze” and “hir”). The fox spirits looks forward to having Caisheng’s babies so that their tribe can last into perpetuity.

Caisheng, however, at the beginning of the story is just a young child. Caisheng feels that the only fox spirit who actually loves hir and does not see hir as just a future stud is Huiniang, who practically raises Caisheng. Huiniang is one of the tribe leader’s favorites, along with Yuniang. Yuniang is determined to be the one to bear Caisheng’s babies. Caisheng sees and talks to some of the human boys Yuniang captured, and decides to leave the fox spirits’ mountain to see the places the boys talked about. While in the human village, Caisheng meets a human boy and girl and plays with them. When a wolf attacks, the boy and girl bravely defend Caisheng’s life. When Huiniang comes to rescue Caisheng, she recognizes their service and puts a mark on the boy and girl so that they can later repay the kindness. Yuniang, meanwhile, is expelled from the tribe.

Two hundred years later, Caisheng finally has the ability to turn into a male, yet ze is hiding the truth from all but Huiniang. Caisheng only wants to have children with hir one true love, and ze is not in love with the fox spirits. Huiniang, meanwhile, fell in love with a human, and left the tribe to marry him and have his children. Caisheng figures that Huiniang is the person ze loves the most, so Caisheng wants to have hir children with Huiniang once Huiniang’s husband has died. Huiniang, on the other hand, wants to become human so that she can grow old with her husband.

On a trip to visit Huiniang in the human village, Caisheng meets the reincarnations of the boy and girl who saved hir from the world two hundred years ago. One of them, Han Yunshi, is an apprentice to a Daoist priest who tracks down and kills yāoguài (hmmm, is there some potential conflict there?). The other, Su Pinger, is a girl from a noble family who is afflicted by some kind of yāoguài. Caisheng expels the yāoguài and discovers it is a cat spirit called Gu Mao.

A xiān called Wei Ziqiu comes looking for Caisheng. His task is to bring hir back to the place where the xiān live to make hir a full xiān. Wei Ziqiu was originally human, but transformed into an immortal after suffering great tragedy. If Caisheng has children with the fox spirits or with a human, ze would be unable to ever become a xiān.

It also turns out that Gu Mao is in the service of none other than Yuniang, the outcast fox spirit who has since turned into a yāomó (which is like a yāoguài but more evil).

This is only the beginning of the story, but it is actually not that hard to keep track of what it going on.

This is a 9-volume work by Yi Huan, one of Taiwan’s most delightful manhua artists. It ran in Star Girls, Taiwan’s girls’ manhua anthology, from 2003 to 2009.

Star Girls is a manhua anthology which is heavily, heavily influenced by shoujo manga. Even though I generally have little trouble distinguishing from Korean sunjeong from Japanese shoujo, I cannot distinguish between Star Girls manhua and Japanese shoujo until I recognize a specific artist’s style (for example, Yi Huan’s style is very distinct). Taiwan’s local manhua tradition was pretty much killed by censorship (by “censorship,” I mean “people did not dare create/publish manhua because they were afraid of going to prison”). After the democratization of Taiwan, Taiwanese manhua experienced a revival, but the new generation’s role models are from Japan, not from the golden age of Taiwanese manhua. Some artists are trying to piece together a new distinctly Taiwanese tradition of manhua, but those artists are not the artists who get published in Star Girls. 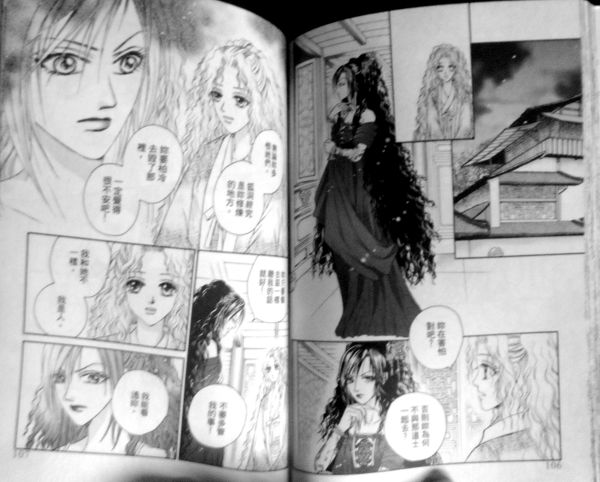 I’ll start with the obvious—THIS MANHUA IS PRETTY!!! 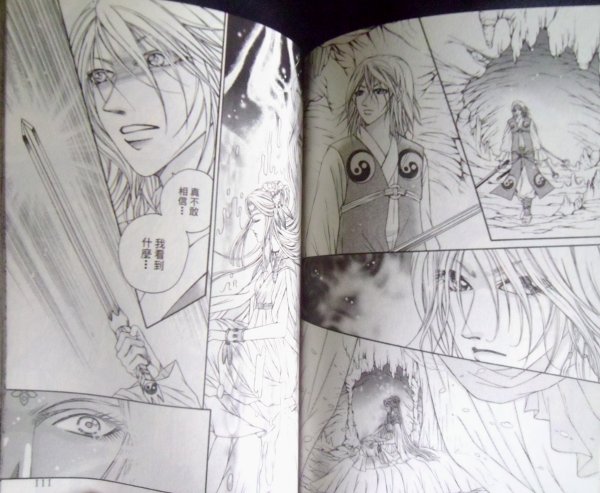 The style is defined by long, vertical, slightly curved, lithe lines. Long flowing dresses, long flowing hair, long flowing flourishes, and so forth. The artwork consists of fine lines without much screentone—which means it is really hard to take good pictures of it with my cheap camera, but on paper it looks really nice. I dig it. I can even forgive it for having jewel-eyes (note: I am not a fan of jewel-eyes). 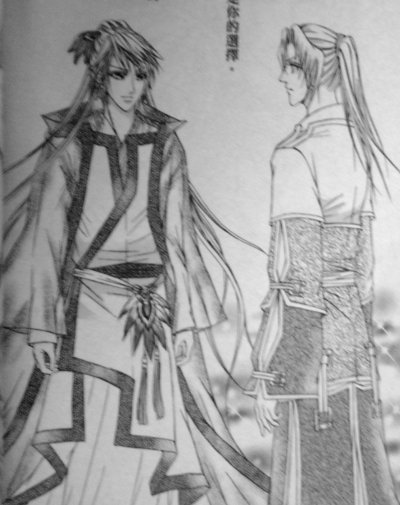 The costumes are one of the most detailed parts of the artwork. Yi Huan clearly has fun with the clothing. Of course, just as clothing is a way humans express themselves, costumes done right ought to express the characters. Yi Huan does costumes right. 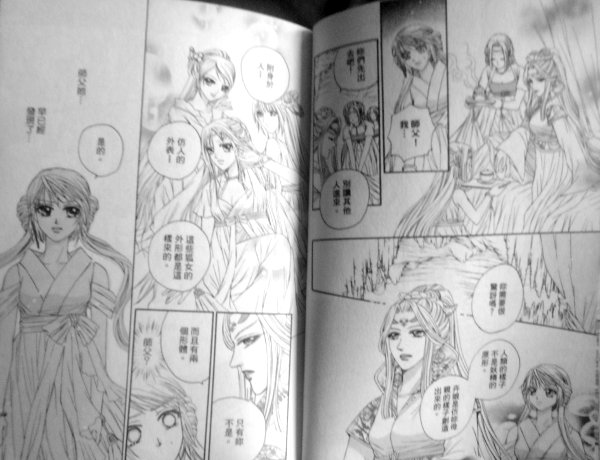 Look at the dresses of the fox spirits. Notice how the waistlines are so high. When a woman wears clothing with a high waistline, it makes her look a bit pregnant. Considering that the fox spirits are obsessed with making babies, it is appropriate that their attire would have such a high waistline (it’s also appropriate that Caisheng has such attire, since throughout much of the story ze is wondering who to make babies with). Of course there is more that could be said about this, but this is comic book criticism, not a discussion of costume theory. 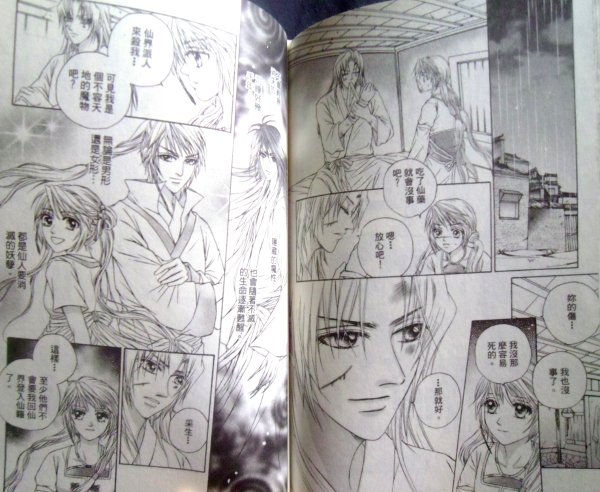 I actually did not realize that the later volumes were so crowded with talking heads and reaction shots until I actually started thinking about the artwork from a critical point of view. But the later part of the story is pretty much an angstfest, and angstfests tend to look pretty busy, artwork-wise. 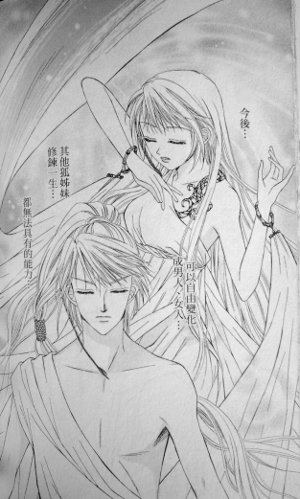 The manhua is punctuated with pages like this which show off the characters’ graceful figures. 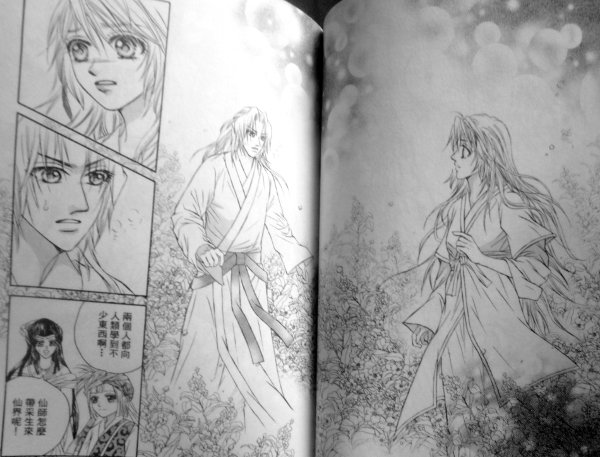 These pages are meant to make the reader sigh. And it works. I am trying to come up with more insightful observations about the artwork, but as I’m flipping through the pages, all I am thinking is “pretty … pretty.”

More On the Story

The story sets up a world based on Chinese mythology. I bought into the alternative logic. Indeed, I got caught up in the love polygons and the drama and all that angst.

This story is ultimately about choosing between love and longevity. If Caisheng gets the fox spirits pregnant, the tribe will live on forever. But Caisheng does not love the fox spirits. Huiniang does not want to live without her beloved husband, so she seeks to become human so they will die together. Wei Ziqiu has become immortal, yet he is losing the passionate feelings he had as human, and trying to hold onto them might cost him his immortality. Caisheng wants both love and longevity, but having both is impossible—either the lovers will change so much that they will no longer be the people they fell in love with, or they will stay the same forever, and that would merely be death of a different kind.

When I put it that way, it makes the story seem really deep. So I am wondering why I didn’t have a deeper experience.

I think it’s because the second half of the manhua is too rushed. I sometimes do not understand why characters make certain choices because their motivations have not been sufficiently illustrated for me. And I think that’s it—the second half of the story needs more supporting plots to illustrate its points. While the point of Huiniang’s subplot in the early part of the manhua is quite clear, the point of the subplot around Huiniang’s clone is not. So while I understood the plot … understanding the plot is not the same as being moved by the plot. The last part of the manhua is less moving than the first part.

That said, the story overall is still good. My main complaint is that, even though it could have been a masterpiece, it is not.

The first 5 volumes were published in English by Dr Master. While it is a pity they did not publish the full run, at least the volumes they did publish are the better volumes.

They can be obtained for low prices at many websites. At the Cubic Mall Manga Outlet, they can be obtained at 2 USD per volume. At that price, it’s worth buying just for the artwork alone. Buyers can also pick up some volumes of The Legendary Couple at the same time, which was previously reviewed here.

Good artwork and good story. What more can one ask for?

Okay, I ask for great stories and great artwork. On the other hand, I’ve read Divine Melody twice, and enjoyed it both times. It held up well on the second reading, something which cannot be said of many comics.

The most important thing is Yi Huan’s distinctive style, both the drawing and the storytelling. I have not read any other comics quite like hers. That is why you should read Divine Melody.

Next Time: My Queen (idol drama)

Sara K. is listening to birds right now. Yes, even in the heart of a industrialized Taiwanese city, there are songbirds, though it is remarkable that she can hear them more clearly than the scooters. Sara K. is impressed with how few pigeons there are in Taiwan – possibly because Taiwan has a zillion birds, so there is not much room for pigeons. Some people come to Taiwan just for bird-watching. Taiwan also has the world’s prettiest butterflies (well, at least the prettiest butterflies Sara K. has ever seen).