I don’t often fall in love with fictional characters…okay, that’s a lie, I do it all the time. Despite what I imagine most people would think, this does not usually happen because the character is drawn with very few clothes, or has over-developed sexuality. No, my feelings are more pure and entirely based on personality (with a small heaping of looks thrown in there).

The thing is, I tend to fall for very specific type of fictional woman—the type that would utterly terrify me in real life. Olivier Armstrong is one of those women. I can’t really explain why this happens, but what I can explain is why she’s a badass, and if she were real I’d willingly be her servant for life.

PS: I was thinking this would make a perfect Valentine’s Special…but…well, it’s a little late for that. So pretend this got published back in February.

What Happened?
As the rebel forces begin their assault on central, Major General Olivier Armstrong makes her move, capturing one of the inner circle generals. The Central forces target her as a high priority target and attempt to take her down. But they are impeded by the arrival of the Homunculus Sloth. 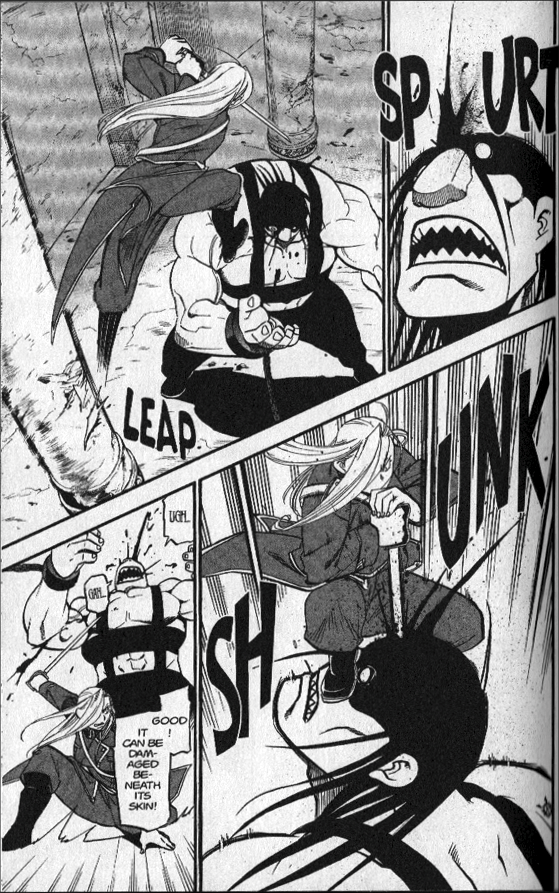 What Happens?
Olivier’s sword does little to no damage to the behemoth, and it isn’t until the arrival of Major Alex Armstrong that they are able to do some damage to Sloth. Just after the sibling pair deal the first serious blow, Sloth reveals his true ability, supernatural speed.

Sloth’s speed turns his body into basically an obscenely heavy bullet, as he is unable to control his trajectory after launching himself. Major Armstrong is able to use this to his advantage, by placing a stone spike right in Sloth’s path. This severely injures Sloth, but not enough to finish him. 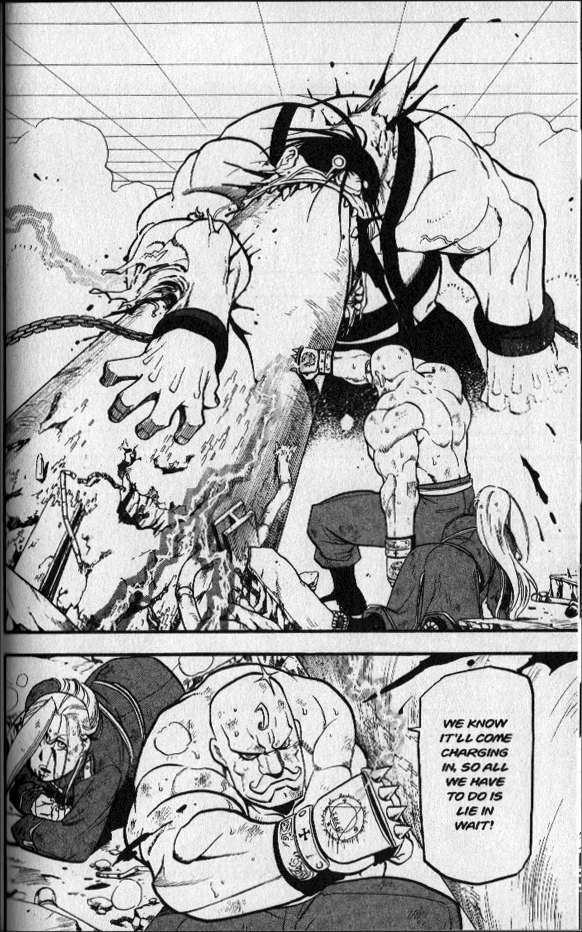 The Armstrong siblings are surrounded by Central soldiers, who try to arrest them, but are attacked by the artificial humans. As Sloth breaks free from the spike, more Central soldiers arrive, and Olivier takes command of them. She organizes them to take on the artificial humans, while Alex focuses on Sloth. With his dislocated shoulder, Alex is unable to properly fight. The soldiers urge Olivier to go help him, but she refuses, knowing Alex is tougher than the soldiers give him credit for. He uses one of Sloth’s attacks to pop his shoulder back into place, and is able to start fighting Sloth back.

Sloth still won’t go down, and he continues to target Alex and Olivier. The soldiers try to hold him back and give the Armstrongs a chance to escape, but Alex refuses. It is at this point that Izumi and her husband show up. They, along with a reinvigorated Alex, give Sloth a thrashing to the point that he finally dies. 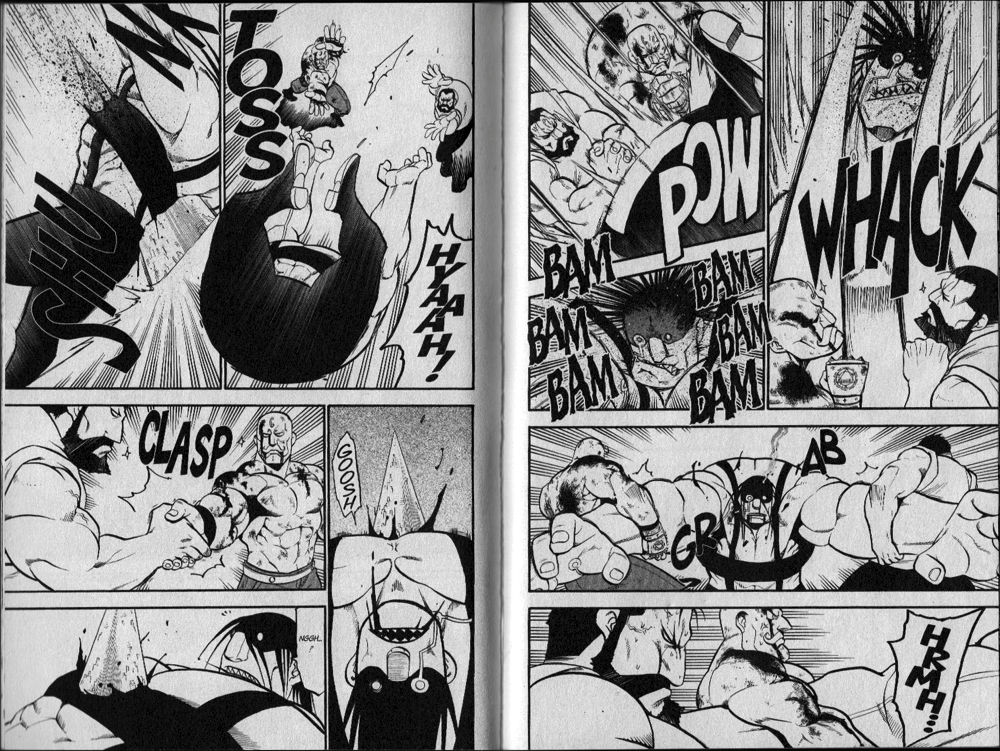 What Does it Mean?
What makes Fullmetal Alchemist stand out is that Arakawa isn’t afraid to break shounen tropes here and there. Usually fights in shounen manga focus more on one on one battles. Team battles like this one tend to be more the rare side. The fight also serves as more than just a way to eliminate one of the enemies. It serves as closure for the relationship arc between the two Armstrong siblings.

While Olivier’s opinion of Alex had been low the entire series, during this fight we see how she works. She may say Alex is worthless, but when it comes down to it she trusts him enough to remain focused on her own job. An effective fight scene needs to accomplish multiple things. At the most basic it needs to be cool to look at, but it also needs to provide this kind of character growth.

In team fights like this it may be tempting to say that one member of the team did more than the other. The bulk of the fighting is done by Alex, which could be construed as downplaying Olivier’s ability as a fighter. But there is no need to pull out the sexist manga card on this one, as the Alex and Olivier both fulfill specific roles that were previously developed parts of their characters.

Alex may not be able to beat Olivier in a one-on-one fight, but he is more suited for fighting with brute strength. And while Olivier has been portrayed as an exceptional fighter, that part of her is not emphasized as much as her ability as a leader. There is no need to give her character arc closure with a one-on-one fight, because her character is much more focused on leadership. And just as Alex gets his good fight, Olivier gets to show off her chops as a leader by taking command of two platoons of soldiers sent to capture her and fully gaining their loyalty. 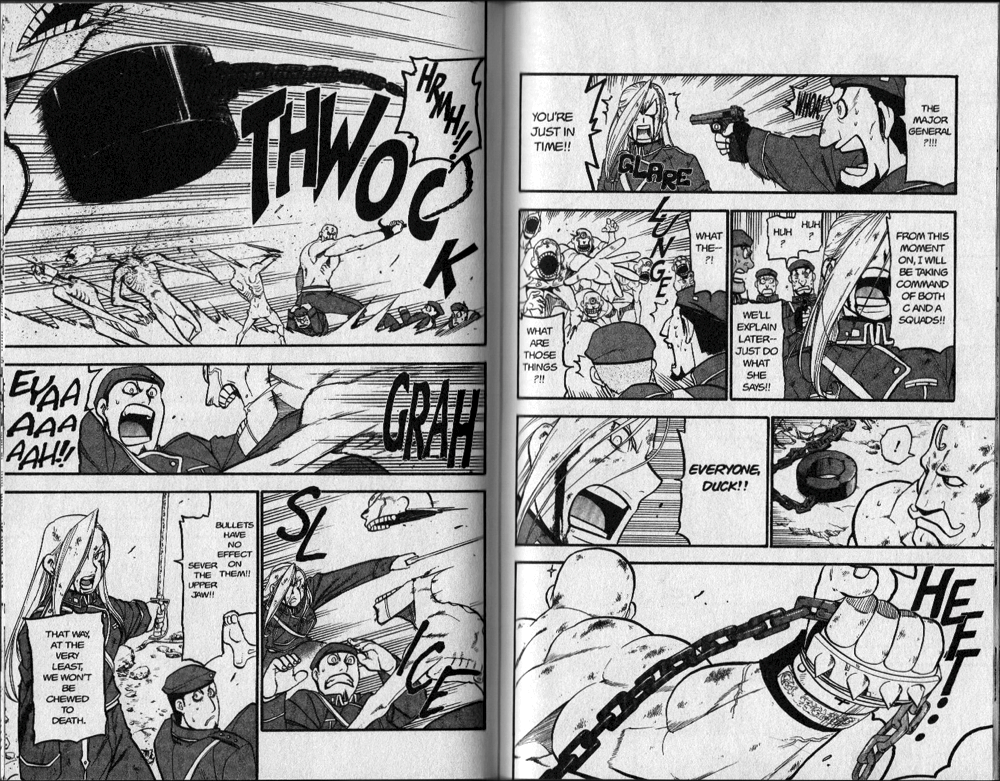 The end of the fight is a bit disappointing, because the two are unable to win without being saved by the Curtises. A better ending would have been to go the more archetypal route of having Alex and Olivier pull through to the very end and finish Sloth off. To have two outside forces aid them this far into the battle does unfortunately diminish their success. Fortunately this is a minor complaint, as the moment is executed with plenty of style and comedic callbacks with Alex and Mr. Curtis.

Ultimately the final fight against Sloth works because the bond between the two siblings is more important than their ability to defeat their enemy. They had prior victories, and in the end it did not take a final victory to cement their character arcs. The important development occurred during the fight, so the weak ending can be forgiven.