It occured to me that in the event that I ever run out of fights to cover (HA!), I needed to think of variations on my basic theme. And then I thought, instead of focusing on individual fights, it would be worth it to look at the basic fighting style(s) of entire mangas. If the overall fighting style of the manga isn’t interesting, then no amount of individual fights can salvage it. So in the spirit of imposing my opinion on which fighting manga are worth your time, I will start this brand new variation on my old theme.

Bleach has been called Dragonball Z, with swords. And I personally have absolutely no idea where anyone ever got that idea. I mean it’s not like Bleach spends insane amounts of time on fights, has characters of world shattering power, constant powerups, and always one more enemy to overcome … okay so maybe I can see where people might get that idea. But this is not a piece comparing DBZ and Bleach, rather it’s about the fighting in Bleach as a whole. 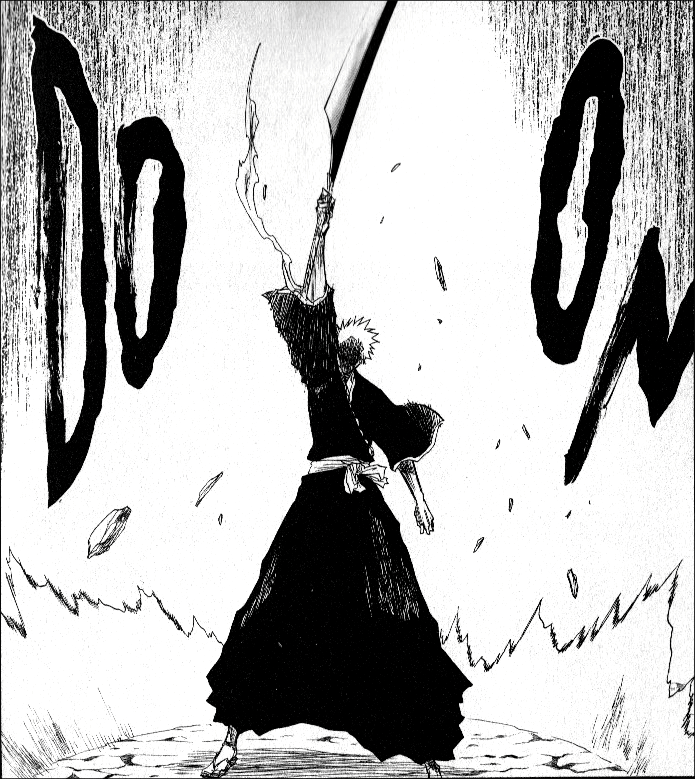 While Bleach does fall under the category of a “sword” manga, the swords are never really focused on that much, at least not later on in the series. There is no actual swordplay that goes into the series, rather it’s about who has the higher spirit power. Essentially the swords could be removed from the equation, and absolutely nothing would change.

Where a series like Rurouni Kenshin focuses a great deal on the philosophy of swords, different sword techniques, etc, Bleach takes a different approach. Rather than taking a swordsman philosophy stance, Bleach instead takes a “warrior” stance. The characters are not seen as swordsmen, but rather as warriors. This is emphasized by the fact that several of the characters have releases that remove all semblance of swordsmanship from their fighting style.

While there are several fighting styles presented in the manga, the most basic form of combat is using Zanpakuto, which are essentially the only weapons capable of damaging spirits. Each Zanpakuto has three forms it can take. The basic form is that of a Katana, which rarely gets used during fights as the series progresses; the next form is the Shikai, which changes the form of the Zanpakuto and gives it extra powers—very few of the Zanpakuto still look like swords after this initial release; the final release is the Bankai, which enhances the basic powers given by the Shikai, and enhances the spirit powers of the wielder. 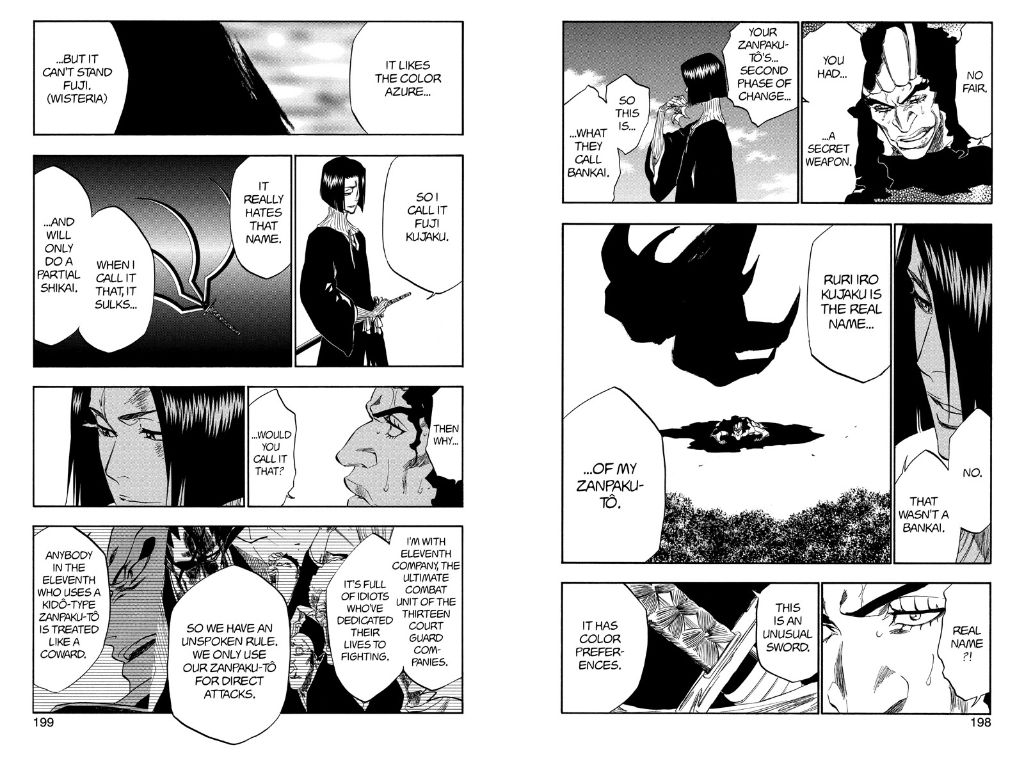 Initially the basic enemies, Hollows (fallen spirits that devour other souls), have a variety of powers, but as the series progresses they are replaced by the Arrancar, a new form of Hollow that have removed their masks to gain Soul Reaper powers. They seal their Hollow powers into Zanpakuto that they can release to unseal those powers.

Throughout the later volumes of the series, a lot of focus is put on why Ichigo fights, with a fair bit of philosophizing going on about what it means to be a warrior. The fights, early on at least, are well developed, and take advantage of the unique powers to make every conflict interesting. In a way, despite the initial focus being swords, moving away from swords is a good idea, as it provides an infinite number of possible powers. But as the series progresses, more focus is put on nothing but the fights. And without the investment required to care about the conflict, I for one was left uninterested in any of the fights, especially since many of them devolved into just sword fights, something the series had moved away from.

Overall, Bleach took full advantage of a large variety of powers, and made fights that were a delight to read. Unfortunately, the fights lost their luster later on, resulting in a series that focuses entirely on fights, but fails to instill them with any kind of gravitas. Considering that for a while it was one of the only series where the outcome of the fights could really get me emotionally invested (see Ichigo vs Ulquiorra), it’s a real shame to have lost that.

I hope you enjoyed this new format. I’ll still focus on individual fights, but I think it might be interesting to look at the fighting styles of a series overall. I can’t promise anything just yet, but eventually I plan to broaden my gaze even further, and compare fighting styles of different series, to really show how they compare to each other, in an attempt to really understand what makes for a good fight scene.

Feel free to check out Derek’s blog over at Burning Lizard Studios, for manga and anime, as well as general graphic novel and cartoon reviews.