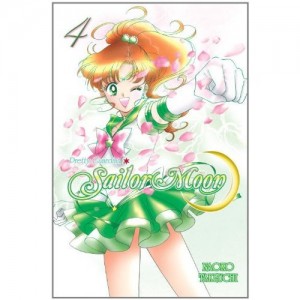 After my aggravation over volume 3, in this volume, things start taking on a more serious angle with the remains of the team trying to make sense of new villains (Black Moon), and the kidnappings of Sailors Mars and Mercury. Chibiusa’s backstory begins to be fleshed out and Usagi starts to buckle under the stress of having all her friends snatched away from her. I was really frustrated by the previous story’s lack of tension despite all the danger they were in, but Takeuchi re-applies the pressure by bringing more people in on the fact that the Sailor Senshi are missing. So now things are moving faster, and this is better for the narrative in my humble opinion.

I find that despite Usagi discovering her royal lineage, she proves she’s still a teenager with her jealousy over Chibiusa hanging out with Mamoru so much. But as we learn more about Chibiusa, we discover that Usagi and she are more alike than they realize. Turns out Chibiusa and Usagi are related to each other and Chibiusa is from the thirtieth century. Using the two girls as a sounding board, I often wonder what would happen if I met my future descendants. Would I have anything in common with them? Or more importantly, if they were in trouble, would I fight for them? It’s interesting to speculate, especially since I had previously derided Usagi’s somewhat childish behaviour towards Chibiusa. Does this completely absolve Usagi? No, she can still go over her boundaries into somewhat irrational territory but I’ll give her a pass from now on, within reason.

A little window gets opened in relation to Sailor Jupiter. Since she was introduced, I haven’t seen sight nor hair of the poor girl, except when she’s needed to defeat evil, blah, blah, blah. But I get an teeny tiny window into her thoughts and how important the others have become to her, and she then perfectly articulates why the rest of the girls and Mamoru don’t look (on the surface at least) to be all that concerned about their missing comrades. Also, we see her and Motoki have a tender, quiet moment only to have it snatched away without Motoki knowing it’s happened. Is this a comment on the attrition of war and its effect on its soldiers? It would be interesting if I could confirm this. The manga runs its usual wire-thin line between tragedy and comedy, so all bets are off in this volume as to where Takeuchi takes this.

In my quest to understand what theories you could derive from Sailor Moon, I’m looking at the concept of Black Moon as villains. For the most part, the individuals fall into the Dark Kingdom’s mold of villainy for villainy’s sake. But the overarching idea behind them (and I’m trying to stay out of spoiler zones here) is they are rebelling against the established order. They don’t want to simply accept that this is how society has gone and they won’t agree with it. The problem for them is, like all rebellions, there’s nothing inherently wrong with not wanting to go with the rest of society, just that once you get out of talking and protesting about your ideals, you reach an impasse. You can either accept that change will take time and get into the trudge of eventually changing things, or you decide more drastic measures are required. Black Moon falls into the latter category. So they murdered and maimed their way to the top of Chibiusa’s world and now want to do the same to the present. So in this way, I would surmise, the lesson here is you can get what you want, the only thing you’ve got to do is not mind stepping on people to do it. It would be fantastic to think Takeuchi was trying to say something about the manga industry but I fear I’m grasping at straws here.

Another thing that pops up is the idea of pre-destiny. For those who do not know, predestiny is the idea that all the major events in your life were pre-ordained before you ever existed and continue after you’re gone. Two people suffer this problem: Chibiusa and Mamoru. Mamoru is in a brief (and I’m stumbling for the next word) spiritual conference with his dead lieutenants—the ones who were Queen Beryl’s resurrected minions but who later came to see the folly of their ways. He wonders why he was even reincarnated if he can’t protect Usagi. Was he fated to fail? No, say his lieutenants, because you’re here means that Usagi will be Queen and you King. While Mamoru begins to understand from that point on, it’s not decided or explained by the author whether Mamoru’s men know this truth about him because it is a truth or because they have advanced knowledge. Is it predestiny if it’s imparted by a person outside the need for a personal destiny? On Chibiusa’s side, was she always fated to find Usagi and the Sailor Senshi? Is the fact that she’s related to Usagi a deciding factor in her arrival in our present? Again, no answers, just concepts.

I have to say this volume has me thinking, rethinking and over-thinking the plot and concepts it brings with it. We haven’t even talked about the amount of pressure Usagi—that she alone finds herself under by the end of the volume. Things get very grim for our heroes—decidedly so. While I’m sure there’s an inner light or a new spell to call upon, I find myself hammering away at the cogs of the machine rather than the machine itself.

Hey, I’ve a homework assignment for all of you, if you’re interested. Can you tell me what part of Sailor Moon got you thinking beyond the page? What ideas or theories did it throw up? If not Sailor Moon, you can use any shoujo manga you like. I’ll print whatever you send me in next month’s Sailor Moon post. If your comment has spoilers for SM, then I’ll ask Melinda to post them for me so I don’t read them ^-^!

After my blood pressure problems with dealing with volume 3, I should be equally angry with this volume, but that one conversation with Sailor Jupiter took the wind right out of my sails. So is the series getting better for me? Certainly, and my initial hangups about the series (it’s too girly, the villains are wishy-washy) have largely evaporated due to Takeuchi’s layering of plot on plot, dialogue over dialogue as we start to see the whole thing start to coalesce into something close to a concept in motion. This series, despite the occasional landmine, continues to shine and hold my attention.