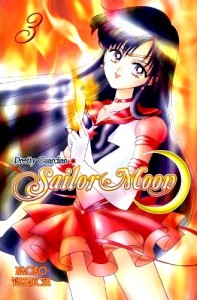 Escalation and dissipation could be the by-words of this volume of Sailor Moon and oh, Lordy, is it interesting! To illustrate my point, I use science, specifically stellar physics. In some stars, after a star has used up its fuel, which it burns through Hydrogen to produce a nuclear fusion reaction, it will start to bloat as the star fuses helium to carbon and oxygen. The pressure within this star has been building since fusion stopped and now it’s reached its breaking point. Solar layer upon layer will violently blow itself off until all that is left is a white dwarf, a smaller, brighter version of the original, full of its own mysteries.

It is this analogy that works for me in my attempt to explain the events of this volume. We have the conclusion of the fight with the Dark Kingdom. Queen Metalia and Queen Beryl (how many queens can you have?) are in the ascendant. The team is desperately trying to save Usagi from a brainwashed Mamoru, who has grabbed her in an attempt to get the Legendary Crystal. Their attempts cause the team to travel to the frozen wastes of the Arctic circle.

For her part, Usagi is trapped inside the Legendary Crystal. After sacrificing herself to free Mamoru, Usagi finds herself in possession of a newfound energy with which to defeat the rulers of the Dark Kingdom. I have to say I like how it’s resolved—not in a rush nor ponderous fashion, just somewhere in between. Takeuchi ties up most of the elements from this arc, sets them into motion for the next arc, all while allowing fans who’ve wanted a resolution to get it without going “OK, show’s over folks! Goodnight!”

Now, I have problems with the next arc’s beginning. We are introduced to the new villains, Black Moon, who’s plan is to… I don’t have a clue. (Really, the villains in this series sometimes give the appearance of “Bwa-ha-ha-ha! Champions of Justice, fear me, for I am…!” being villainous just for the sake of being villainous) During a battle with the Senshi, they kidnap Sailor Mars. And then don’t do anything remotely villainous with her. Or attack the team again. Wait, what? I don’t mind the idea of dissipation, it’s just that the team lose all momentum. Even with Mars missing, they don’t seem that pushed, at least in my mind. They even deflect questions in school as to where Mars is. Doesn’t this girl have friends or family outside of the Sailor Senshi? Has anyone filed an APB or what? Am I being too critical? Am I only one who feels that this kind of dissipation after such an epic fight is kind of a letdown? I understand that we have a change of pace after the Dark Kingdom’s “Bwa-ha-ha-ha!” methodology but there’s no reason to suspect or even hint that the bad guys are mistreating Mars for their own purposes. At least, Beryl brainwashes Mamoru.

But the most glaring problem I have got is with Chibi-Usagi (or Chibiusa as she’s later to be know as). She’s a smaller version of Usagi who appears out of, literally, thin air, holding a gun (!) to Usagi’s head and demanding the Legendary Crystal from her. To top things off, she’s clingy towards Mamoru, brainwashes Usagi’s parents into letting her stay with them, has a magical key to something that nobody knows anything about. Luna says she’ll investigate but that she doesn’t suspect that Chibiusa is dangerous. Wait, what? Luna was intensely distrustful of Mamoru when he first appeared as Tuxedo Mask, and tried to stop Usagi from seeing him. But Chibiusa is just fine, no trouble. Oh, my brain hurts so badly. If Takeuchi’s plan was to confuse and annoy me, she’s been successful. Is this confusing to anyone else? What is the point of introducing a new adversary, knocking out a member of the team and then introducing a (frankly) baffling new character, inside half a tankoban? How does this help anyone? I am prepared to suspend judgement until I read the next volume but something has to give. I am starting to fray at the edges and I can only give so much leeway.

On a more positive note, the deranged second half also allows me to get some perspective on the overall view of the series. We’re nearly a quarter into the book’s run and we’re still no closer to even a hint at where the series is headed. I like this insofar as I can understand if Takeuchi wants to take time out to set up the next chess battle. Where I think the series’ strength lies is in the backstory. We now know that the Senshi and Mamoru are reincarnations of the People of the Moon and the Prince of Earth (Prince Endymion) respectively. But even after learning all that, we still don’t know their origins as Moon citizens (I never thought I would write that outside of a Gerry Anderson review). But the nicest part of the whole Moon Kingdom is when Usagi chooses to send all of them back to Earth instead of living on the now rebuilt Royal Castle grounds. They’ve got family who love them, back on Earth, so Usagi doesn’t want then to give that up. So it’s back to the only life they’ve known. It’s a nice touch, I like it.

It’s frustrating to read such excellent character development in one part and be baffled by another. I know Takeuchi isn’t doing it deliberately but I’m left asking why she makes her cast take on near insurmountable obstacles then act like total dopes the minute things hit easy street. And by the bye, things haven’t hit easy street because Sailor Mars is still missing!

Artwise, I still am impressed by Takeuchi and her ability to mix the sublime with the ordinary. Even if I don’t like Chibiusa, she’s an interesting character from a design point of view. She looks like a younger version of Usagi, naturally. But unlike more modern young characters in anime/manga, she’s not done from a fetish view. Maybe I’m just seeing what I want to see, but it’s nice to see someone have a higher sense of decorum (God, when did I start sounding like my parents?). Also, I’m happy to report that I finally am starting to be able to tell the difference between the Senshi! Maybe it’s me becoming accustomed to Takeuchi’s art style or maybe it was the handy inside pages at the beginning of the manga telling us who everyone is. I think Sailor Venus and Sailor Jupiter gave me the most trouble as they have similar hairstyles. But it’s becoming clearer—I’m starting to learn the importance of sticking with a series and its inherent value of having names to the faces.

Sailor Moon is great but this volume was trying for me, more specifically the second half with its stop-start-stop plotting. But that’s the nature of the beast, it seems. I’m learning pacing structure within a multi-volume series (something I could never be bothered to do before) and also that for every step you take forward as a reader you must be prepared to take a few steps back, occasionally, (or a lot, if you’re a person who has ever read Stephanie Meyer) at the behest of the author. With a few gripes, minor ones given my overall enjoyment of the series, I will recommend to you, Sailor Moon Volume 3.

In some respects, a white dwarf’s life is more interesting then its previous one. As a normal star it’s only concern is keeping itself going. But as a white dwarf, it faces an eternity as it burns brightly. It will fade one day as all things do. But until it does it will be a shining beacon in space, drawing in people as they gaze at it in wonder.