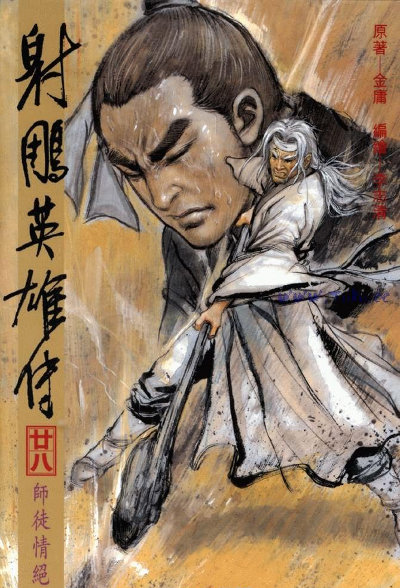 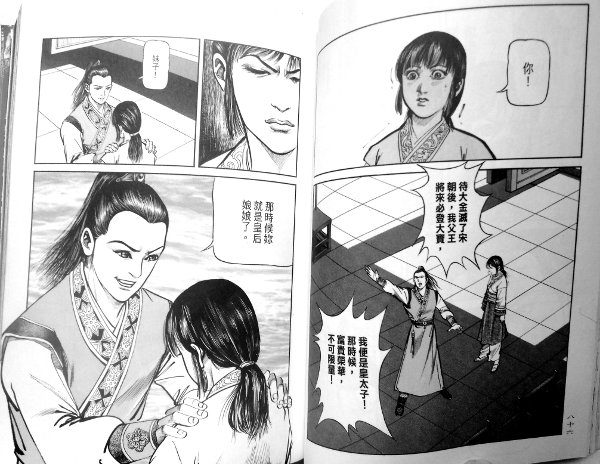 Here, Yang Kang tells Mu Nianci what he plans to do. 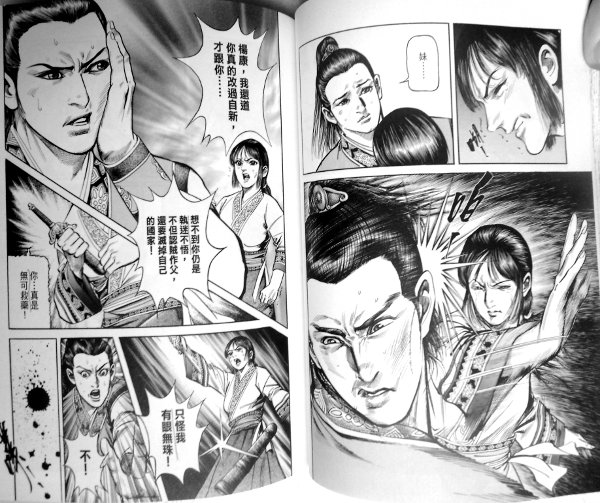 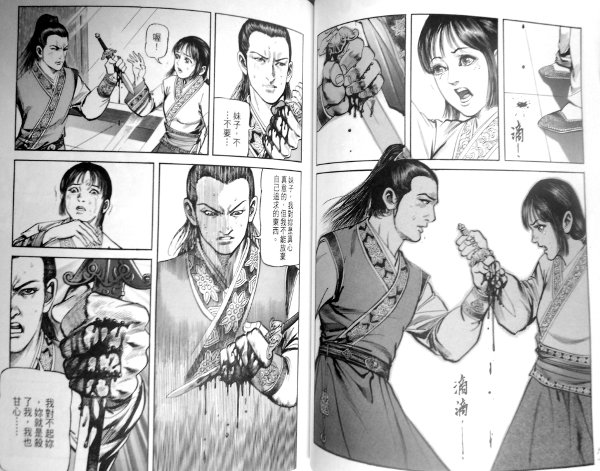 That knife is a great metaphor for their destructive relationship. These two hurt each other a lot … and yet they hold on. Furthermore, it is Yang Kang, not Mu Nianci, who is bleeding. Ultimately, Yang Kang pays the heavier price for this romance. I am not sure whether or not that is their father’s knife (note: this is not incest; she’s adopted, he’s biological, and they didn’t even know about each other’s existence until they were teenagers) but if it is, then that makes the metaphor perfect. 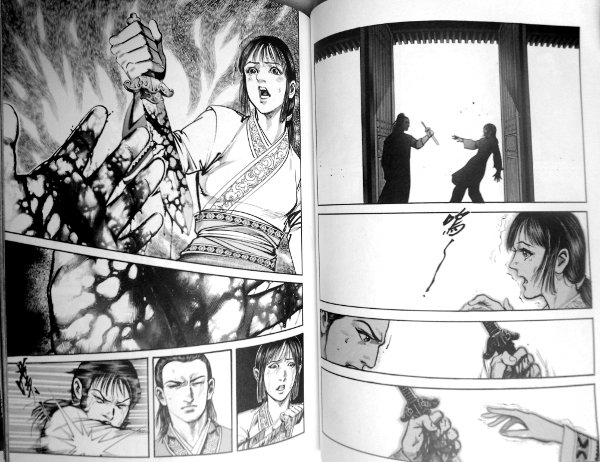 Look at that gloriously bloody hand! 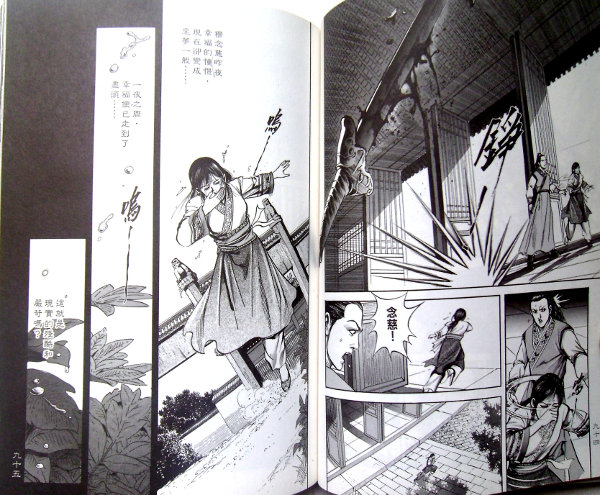 Mu Nianci runs away. But it’s too late. 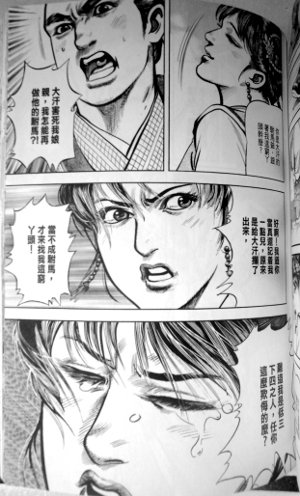 Even though this is also in black and white, the style is in many ways the opposite of Wee Tian Beng’s. Wee Tian Beng’s style is to use sophisticated layouts to present simple drawings. Lee Chi-Ching most of the time uses simple layouts. Panels are generally a collections of rectangular boxes, and each panel generally contains one image. Yet each image is rendered with detailed linework. This artwork is very focused on the content of the panels, not the delivery of the panels. 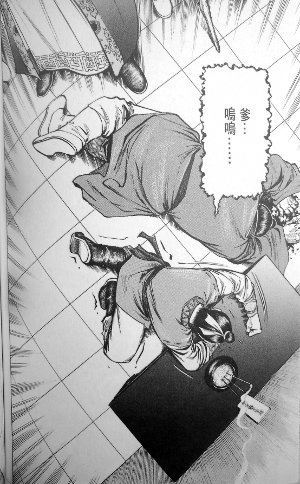 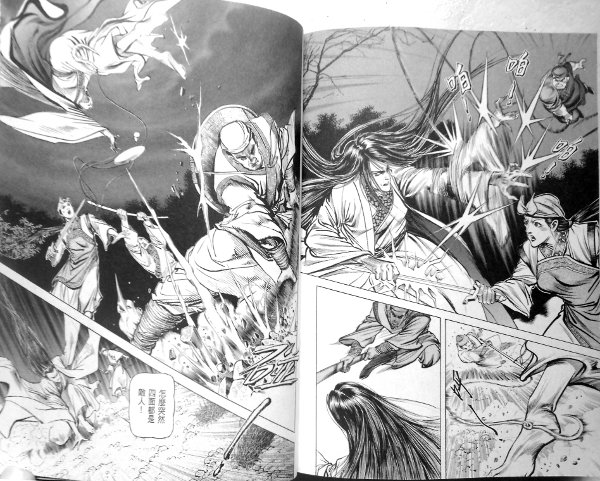 Even though the fights are not as full of “goodies” as the fights in the other manhua adaptations, Lee Chi-Ching knows how to find stillness in the movement of the human body—which is beautiful. 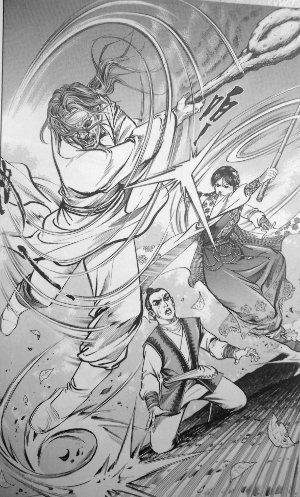 Or some lovely shape is formed by the series of blows—but the loveliness seems incidently to the fight itself. 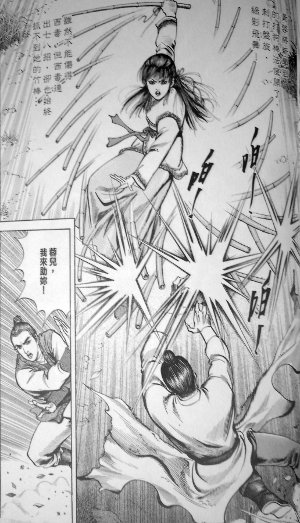 And when the strikes connect, they look like they hurt. It does not look like a show. 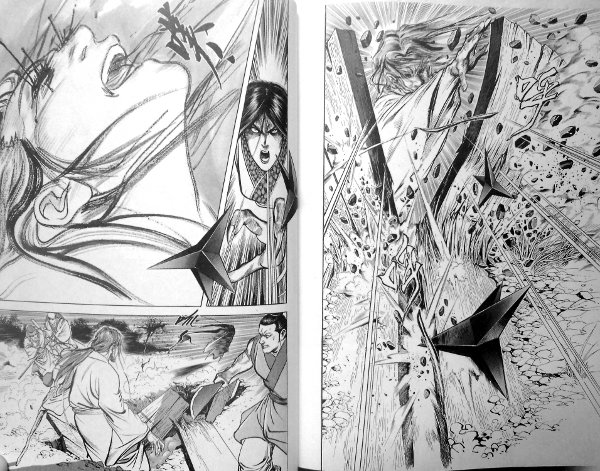 One reason the fights look more painful is that, more than in any other manhua adapted from the Condor Trilogy, Lee Chi-Ching’s drawings focus on the characters. The simplicity of compositions make the characters stand out that much more. When they hurt, the reader knows. 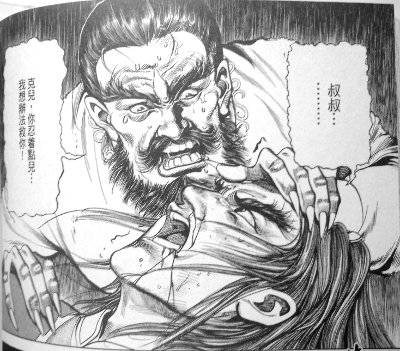 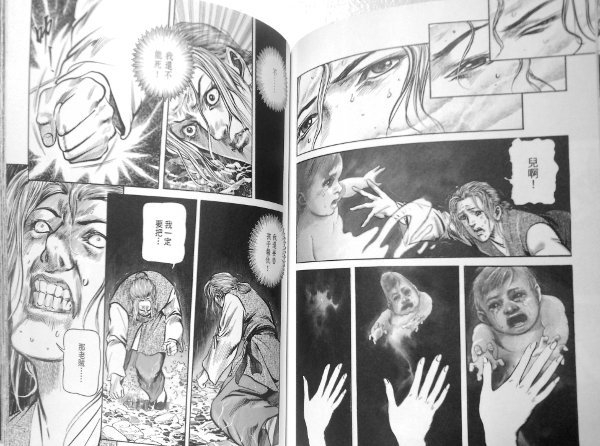 Outside of the fights, there are many panels in which the characters strike a pose that sticks in my mind. For example, this one: 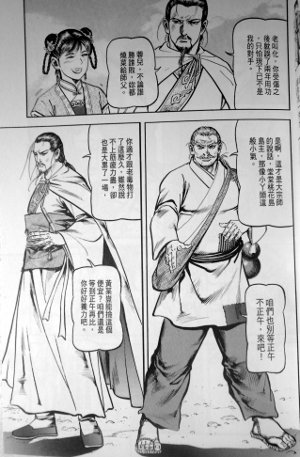 I like how Hong Qigong’s body is open and facing the reader, with his feet spread apart to show power, and how Huang Yaoshi is facing the side, his eyes away from the reader, with his feet in turnout showing that he too can stand his ground—it really fits both of their personalities. Both of their stances convey that they both are experts at using their own bodies—not to mention the clothes. The way Huang Yaoshi’s cape is draped looks quite nice. The the strap of Hong Qigong’s gunnysack matches the diagonal lines formed by the fold in his coat, and the belt adds a good horizontal line to tie it together. 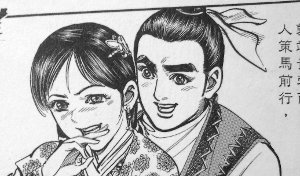 Speaking of clothes, I really like Guo Jing’s hair-tie, especially how it swishes about throughout the manhua. Generally, I think this manhua adapation has the most fashion sense.

And the tears. Lots of tears. 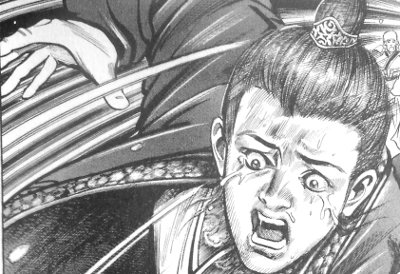 The artwork does not seem to force the drama. It simply lets the tears flow when the characters feel the need to cry. 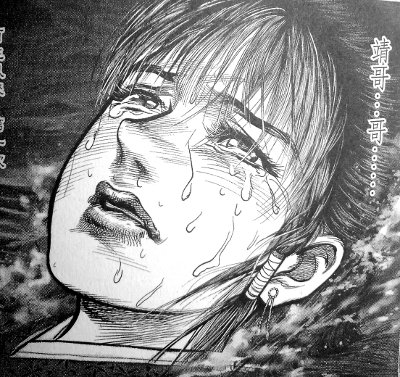 Of course, in this story, practically every other page has a character who feels like crying. 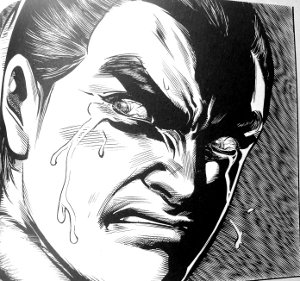 While the compositions are generally simple, they can be quite powerful, such as in this page: 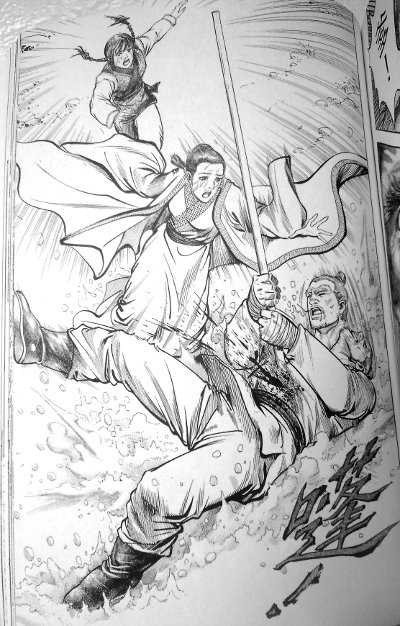 This is a really focused picture. The woman’s arms form a nice parallel with the horizontal line of the man’s body. The vertical lines of the girl and the spear also form a nice parallel and, in turn, point (along with the diagonal lines of the man’s legs) at the main focus of the drawing—the man’s belly. Notice that this picture follows the rule of thirds—the man’s belly is about a third of the way up from the bottom-right of the drawing. The lines formed by the girl and woman’s tears point at their eyes, and the gaze of the eyes are, of course, also pointed at the man’s belly. And of course, inside the man’s belly is a spear-head.

After going through that scene again, I’m the one who now feels like crying…

And there’s this spread: 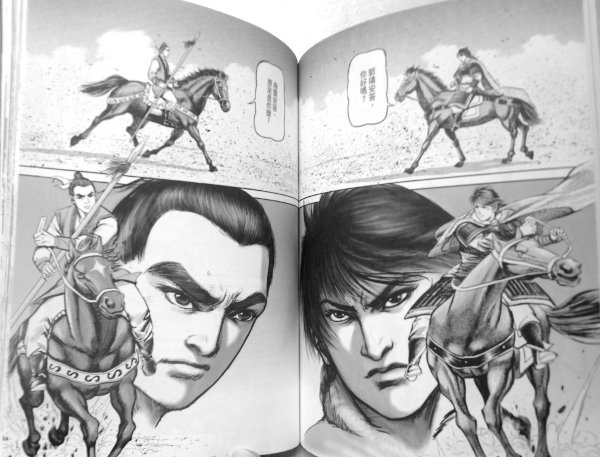 Tolui: Guo Jing-anda, how are you?
Guo Jing: Tolui-anda, so it’s you?

Anda means “sworn-brother” in Mongolian—and in traditional Mongolian culture, sworn-brothers were considered closer to each other than biological brothers. I think Lee Chi-Ching’s drawings show how these two anda feel compelled to do what they think is right, even though that means fighting each other. 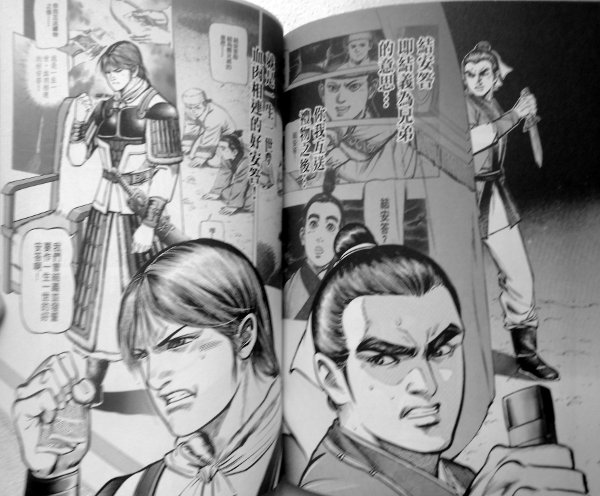 Lee Chi-Ching mirrors these two anda again, this time in a V shape with their childhood memories inside the V while their hostile intentions forms the shape of the V itself. Lee Chi-Ching rarely uses a composition this complex, but he certainly chooses the right moment for it.

And Lee Chi-Ching mirrors the two anda yet again. 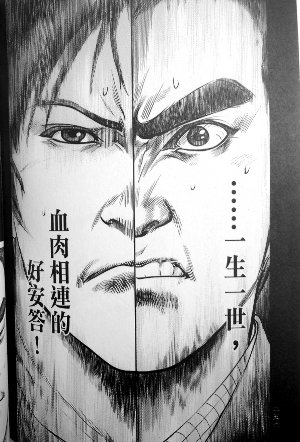 In short, out of all of the manhua adaptations of the Condor Trilogy, the artwork in Lee Chi-Ching’s The Eagle Shooting Heroes does the best job of illustrating the humanity of the story.

This is the least abridged manhua adaptation of the Condor Trilogy. Yes, some details get left out. Yes, there are some changes too—some of which annoy me. On the other hand, the scene I used to open this review is not in the original novel, yet it is so wonderful (are there any other comics where somebody holds a knife by the blade in order to prove a point?) that, for me, it compensates for the changes to the story that I do not like.

There are scenes which, while decently rendered in this adaptation, fail to capture the magic of the novel. For example, while the scene where Huang Rong meets Guo Jing by the lake is one of my favourites in the novel, in this adaptation it feels like nothing special.

And there are scenes where seeing it instead of reading it, in my opinion, makes the impact more visceral. For example, the flock of crows shock me more in this adaptation than in the novel.

This manhua is by far the longest of any adapted from the Condor Trilogy, but each page only covers a little plot. The low plot-to-page ratio means that the pages go by very quickly. It grants Lee Chi-Ching plenty of room to show, not tell, the story. I wish Ma Wing-Shing had done this in his The Heaven Sword and Dragon Sabre.

Lee Chi-Ching’s The Eagle Shooting Heroes is very much about the characters. This adaptation puts the least emphasis in fights of all the manhua adaptations—they generally seem to be there to connect the story together rather than being ends in their own right. Thus, they are relatively short. On the other hand, many pages get spent on the key dramatic moments so the reader can really sink into them. This manhua sets up the roller-coaster of the characters excitement, glee, anger, sorrow, pain, and joy—and it is a hell of a ride.

Much more than any other manhua adaptation of the trilogy, this one gripped me by the heartstrings. Going through it again while preparing this review just reminds me why I love it so much. Each time I go through it, I find many wonderful little bits I had not noticed before.

This manhua is totally unavailable in English. Much as I want this situation to change, considering the financial realities, I am not holding my breath. It has been published in Japanese, though I do not know how to get a hold of a Japanese-language copy.

I have been reading comics since I was four years old. While there were years when I was sticking to re-reads and not trying any new comics, it still adds up to having read quite a few comics in my lifetime. If I were to make a list right now of my favourite comics—in any language, from any country—Lee Chi-Ching’s The Eagle Shooting Heroes would find a place in the top 10. 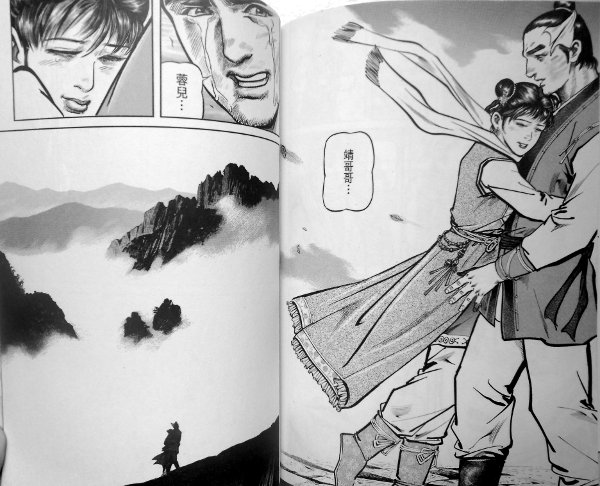 Discussion Question:
What did you think of this series of blog posts? What did I do well? What could be improved? Would you be interested in reading more posts about wuxia, manhua, or Chinese-language pop culture in general?