Welcome back to Not By Manga Alone! This month Megan reviews the all-woman Womanthology, Sean looks at another Kilban collection, Tiny Footprints And Other Drawings, and Michelle visits with the young Beatles in Baby’s in Black.

Womanthology | By Renae de Liz, others | IDW Press – Womanthology was a Kickstarter sensation; the most successful comics project in the crowdfunding site’s history. The over $100,000 it raised has since been surpassed by Order of the Stick’s record breaking million dollar Kickstarter. Womanthology though, remains a singular project. It’s not the first all woman US comics anthology (far from it), but it continues to be high profile, generating both excitement and controversy. Maybe the project just came at the right time, when tensions over gender in the North American comics industry and community were hot, but the project’s continued high profile has meant valuable exposure for over a hundred creators, many of them up and comers. 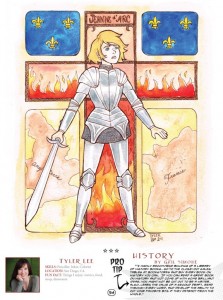 Womanthology is an anthology with a social mission. It sought to build community among women creators, raise money for various Global Giving projects, and be a kickass comic book. It needs, therefore, to be judged by those, as well as artistic criteria. Does the book fulfil the projects threefold mission statement? Yes, yes and no. The results are mixed. Certainly Womanthology’s fundraising was impressive, and the excitement with which comics fans and creators greeted the project, suggest its gone a long way to its mission of building community. Womanthology was a nonprofit book, so it’s difficult to judge its sales figures against say, AvX, but it was recently announced that the anthology has been picked up as an ongoing series by its publisher IDW, so I think we can safely term it a commercial success.

Artistically it’s a mixed bag. The editors chose to pair up established and new and upcoming creators, which is a wonderful community building measure, but the art and writing is consequently varying degrees of polished. Some stories suffer under the shortness necessary for being part of an anthology. Endings are rushed, climaxes misplaced or absent. But one, two and four page stories are hard. It’s not surprising that the stories scripted and/or drawn by experienced cartoonists tend to be strongest. Stories that leaned on fairytale or newspaper/web comic strip tropes also tended to immune to the problem the page constraints. The one-two punch of a comic strip gag is perfectly suited to a tight frame; a superhero origin story might take a bit more breathing room.

Aside from length, some stories suffer from a layout that isn’t intuitive, and doesn’t always clearly delineate where stories begin and end. Titles and credits are too often weirdly placed, tiny, or bleeding into the background. The pages of the book are divided into two parts: up top are comics and pinups, footnoted below is an ongoing comic strip that’s interspersed with creator blurbs and quotes. It’s separated from the bulk of the page by a divider of three small stars rather than a straight line, and while this may sound like a minor issue, it took me a few seconds to figure out what part of the page needed my attention first. Confusing page design can be comic book death, so it’s a good thing the content of the book drew me in quickly. The creator quotes, all of them advice on how to make or break into comics, are the book’s standout design element. Besides being good advice, they contribute to a sense of continuity, which is so important in an anthology.

For me, the big draw of Womanthology is the sheer variety of styles and voices in the book. The art runs the gamut from the traditionally superheroic, to high fantasy, to picture book and even glamor pinups. Ming Doyle’s pulpy superheroine story is a predictable standout, but there is a lot of great work in this book, and not just from the big name creators. Janet Lee’s Ladybird is lovely, unusual and textured. Nado Pena’s colours in A Stuffed Bunny in Doll-Land are stunning; a nice bit of storytelling that perfectly compliments her pencils. Everwell, script by Jody Hauser, with art by Fiona Staples and Adriana Blake is another standout, an original fairytale with two different but equally dreamy art styles. The Culper Spy, script by Amanda Deibert and art by Amy Donohoe is a particularly fun story, introducing Agent 355 of the Revolutionary War’s Culper Ring, a savvy shoutout to Brian K. Vaughn’s Y: the Last Man. But while there’s lots of fresh and impressive talent in Womanthology, many stories could have used another go-through. Several otherwise outstanding stories suffer from misplaced word bubbles that utterly disorder conversations. Some of the book’s prettiest art is at times frustratingly opaque with action scenes that make little sense, and are hard to read.

But these are minor complaints, when the book as a whole is such a satisfying read. The sheer volume of content is impressive–this is isn’t a book you’ll get through in one sitting–and kind of wonderful. The undeniable hugeness of the book, along with the thoughtful creator interviews that wrap up the book, might help you through your sticker shock. Fifty dollars US! But worth a read. – Megan Purdy 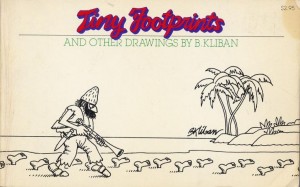 Tiny Footprints And Other Drawings | By B. Kliban | Workman Publishing – I had said in my review of Kliban’s last collection, Whack Your Porcupine, that his use of art and wordplay was at its zenith. In Tiny Footprints, we see him going in the opposite direction. Except for one brief section dealing with rhyming sentences, these cartoons are almost entirely wordless, requiring you to focus on the art to get the humor. Perhaps as a result, the humor is much stranger here, and his cynicism that has popped up through the prior books seems stronger than before. I note that between his last book and this one, he had published a cat calendar and cat portfolio, so perhaps this collection is a contrast to the growing celebrity his cat drawings were getting in the public eye. This is the other Kliban, who could be crude and nasty towards humanity but also judged them with one of the best artist’s eyes in the business.

Some other things I noticed in this collection: there’s a lot of transposition of humans and animals in here, with Kliban never quite allowing us to forget our roots – or indeed how thin the veneer of ‘sophistication’ we have is. This goes both ways, of course – one cartoon has a delivery man being barked at by a naked man patrolling his fenced-in yard, while another sees an unimpressed princess holding a frog sticking out its enormous tongue, clearly ready for much more than a mere peck on the lips. There’s also some analysis of the ‘professional’ and the degrees you can get for it – we see a street corner with a prostitute who apparently has a Ph. D. in her field, and another street corner noting a beggar with the same. But as always, my favorite cartoons tend to be those that make me stare and say, “…what?”, such as the bus shaped like a duck walking down Main Street. Taken as a whole, these cartoons once again make you admire both the visual eye and the twisted mind of this artist. — Sean Gaffney

Baby’s in Black | By Arne Bellstorf | First Second – First off, let me state up-front that I am a huge fan of The Beatles. Not only that, but I am the kind of Beatles fan who has read multiple books about them and their early days and who would certainly be capable of finding fault with a graphic novel purporting to be about them. I clarify all this so that when I tell you that I enjoyed Baby’s in Black immensely you will realize how tough I will have been to please. 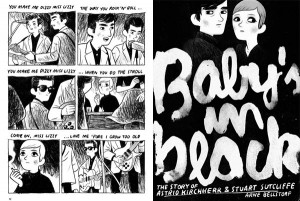 It’s a familiar story for me: The Beatles are playing in a club in a seedy area of Hamburg, Germany. One day, a young German named Klaus Voormann happens to catch a performance, and is so awestruck he insists that his quasi-girlfriend Astrid Kirchherr hear them for herself. Astrid, a photographer, is instantly intrigued by the group’s enigmatic bassist, Stu Sutcliffe, and while she befriends the band as a whole, she and Stu soon fall in love. He’s only in The Beatles to please his best friend, John, but with Astrid’s encouragement enrolls in a local art school and begins to attract notice as a painter. Alas, just as things are starting to go well, he begins getting these awful headaches.

Sometimes, a phrase can be really important. In this case, the phrase in question appears on the back flap and reads, “Written with extensive input from Astrid Kirchherr herself…” If this phrase hadn’t been present, my reaction to scenes of Stu and Astrid alone together might’ve been dubious. But because of her involvement, it felt like I was getting to see little moments between them that had never been considered significant enough to make it into any other chronicle. I wish the book could’ve been longer, or had a happier ending, but it wasn’t meant to be.

I do think Bellstorf handled Stu’s death in a tasteful yet striking way, and I was particularly fond of a few pages afterwards where Astrid’s gaze alights upon various spots in her home where Stu can no longer be found. Too, Bellstorf’s artwork, complete with scribbles that occasionally exceed panel borders, nicely captures the exuberance of The Beatles’ music as well as Stu’s painting sprees. If I had any gripe, it’s that the boys in the band are sometimes distinguishable only by their eyebrows and that I occasionally got Klaus and Stu confused, especially after Astrid gave the latter the haircut that the other lads would eventually ask for themselves.

If you’re new to early Beatles history, this would be an accessible place to start. And if you’re a seasoned fan, you still might learn something new. – Michelle Smith