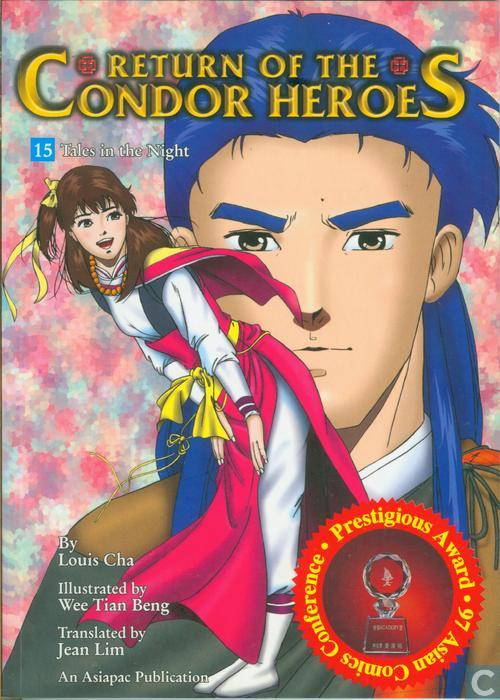 Let’s leave Hong Kong for a post to visit Singapore. A peek at this manhua was already presented in an earlier post: The Condor Trilogy in Manhua: Fighting.

Singapore’s most commercially successful manhua artist by far is Wee Tian Beng. He was the first Sigaporean manhua artist to achieve success in the Hong Kong and Taiwan markets. Wee Tian Beng is best known for The Celestial Zone and its sequels, but before Wee Tian Beng made The Celestial Zone, he adapted Shēn Diāo Xiá Lǚ, using ‘Return of the Condor Heroes’ as the official English title. In 1997 this adaptation won the “Asian Manga Prestigious Award” at the Asian Manga Summit held in Seoul, South Korea. 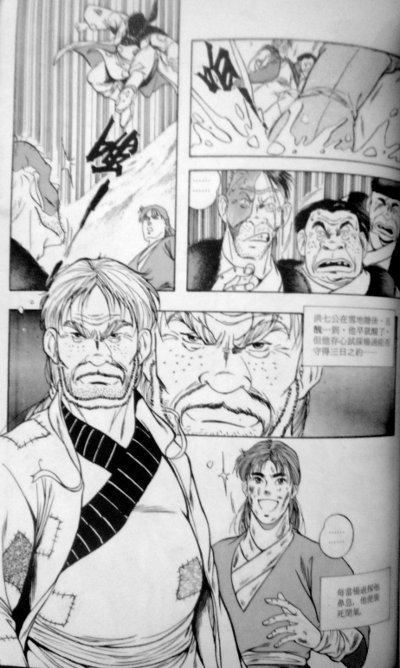 Compared to Hong Kong manhua, Wee Tian Beng’s drawings look simple and cartoonish. I admit that at first that turned me off. However, as I read more and more, it dawned on me that the artwork is quite rich. Sure, the artwork does not have the intricate line-work characteristic of Hong Kong wuxia manhua … but there is such variety in the way Wee Tian Beng draws the story. 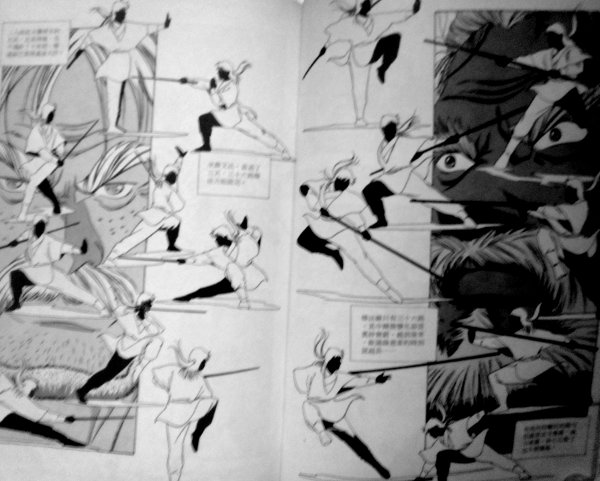 For example, there are many sequences showing a series of graceful motions by the characters. Indeed, I think Return of the Condor Heroes has the most graceful movement of all of the Condor Trilogy manhua – Hong Kong manhua tends to have characters move in a more BLAM! manner. 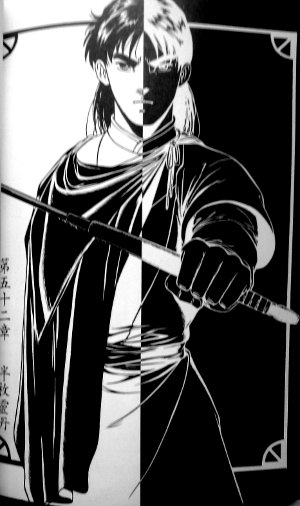 There are many panels which play with light and shadow, particularly shadow. 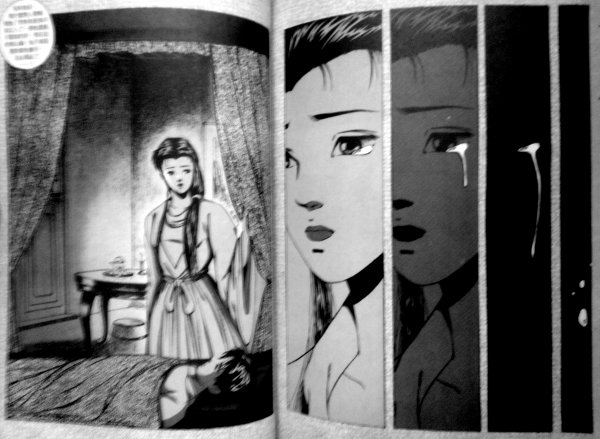 It's because of moments like this that I think that Shēn Diāo Xiá Lǚ is the most shojo-like novel in the Condor Trilogy. When he wakes up, even though his face is still wet from her tears, there is already no trace of her current wheareabouts.

And of all of the Condor Trilogy manhua, Return of the Condor Heroes is the most cinematic. Often there will be a series of panels, or even pages, without dialogue or fancy composition—just simple still shots. 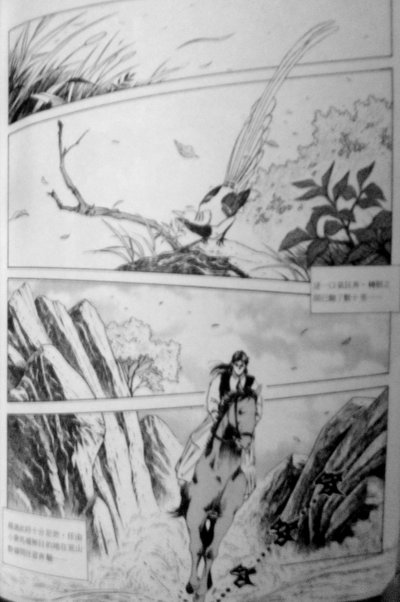 Speaking of cinema, Return of the Condor Heroes is the manhua which puts the most emphasis on natural scenery. Like westerns in the United States, wuxia movies and TV shows sometimes put a lot of emphasis on beautiful scenery. Something about human nature must make people enjoy watching fighters beat the living daylights out of each other in gorgeous settings. Heck, I first became interested in wuxia because it features people beating the living daylights out of each other while wearing beautiful clothes—I only came to appreciate other aspects (the story, for example) later. 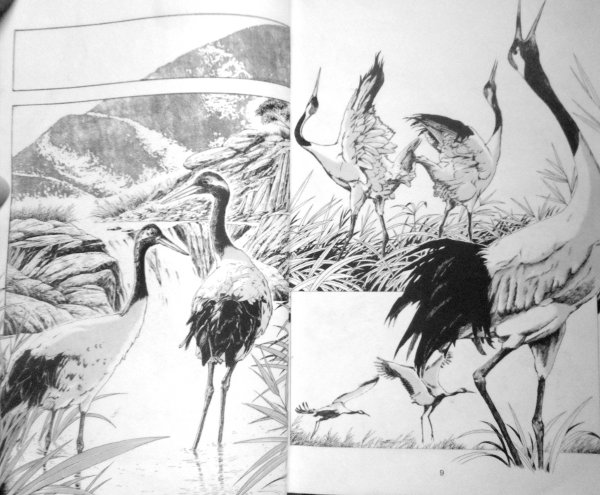 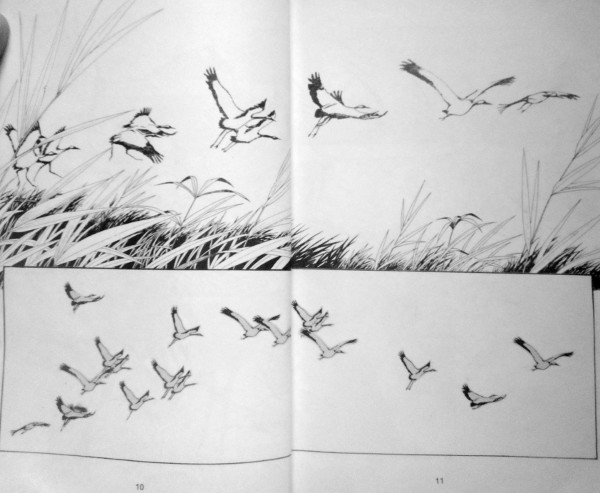 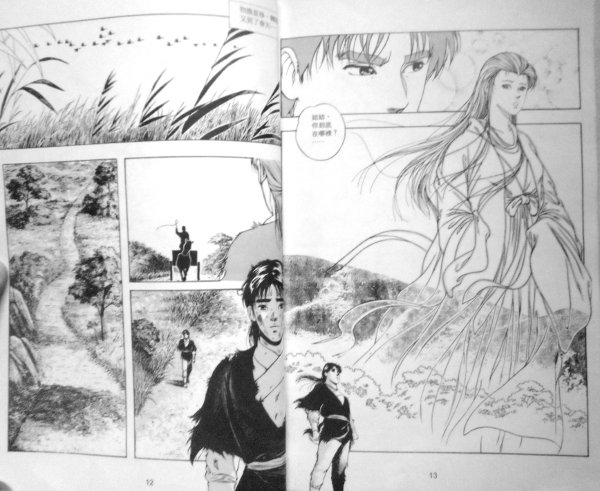 All of the Condor Trilogy manhua show some of the naturally beautiful settings. Even The Heaven Sword and Dragon Sabre occasionally has a nice page or two showing the lovely scenery. But Wee Tian Beng’s Return of the Condor Heroes not only has many panels of lofty mountains, verdant forests, and scenic rivers, it also shows quite a bit of the wildlife too. While Tony Wong’s The Eagle Shooting Heroes is the adaptation to look to if you want luxurious palaces, Wee Tian Beng’s Return of the Condor Heroes is definitely the scenic route.

Wee Tian Beng’s drawings also renders the characters in a more subtle manner than Tony Wong and Ma Wing-shing. For example, I really like the way that Wee Tian Beng draws Guo Xiang. 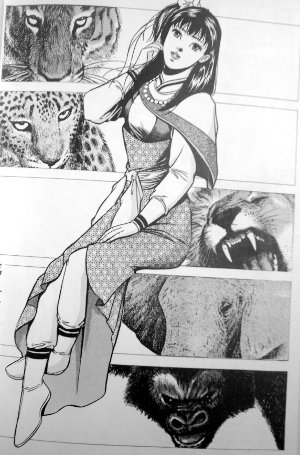 His drawings capture how she is curious, clever, mischievous, and naïve at the same time—in other words, how she is just like many other teenage girls.

While at first I did not care for the way he draws Xiaolongnü, his depiction of her grew on me. 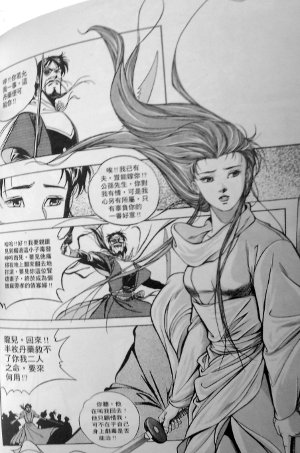 Wee Tian Beng conveys how cold Xiaolongnü is while offering glimpses of the feelings she has deep down. That’s hard to pull off, and something that I do not think Tony Wong really succeeded at. While I haven’t seen any of the TV/film adaptations of the Condor Trilogy, I think that Xiaolongnü would be the most challenging role for an actor to play in the entire trilogy.

So, in spite of a bad first impression, the art definitely won me over. 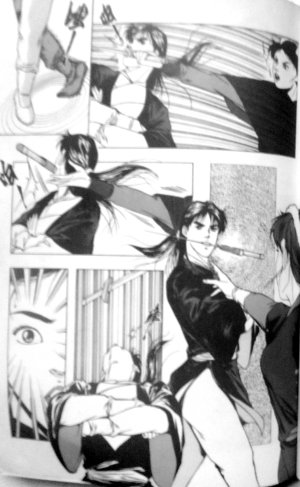 Did Yang Guo just yank away that knife with his mouth? THAT IS SO COOL!

Wee Tian Beng botched the depiction of Yang Guo’s childhood. He shows Yang Guo as a mischievous young boy—fair enough, Yang Guo is a mischievous boy. Yang Guo’s childish exploits are shown in a humorous light—fair enough, some of them are humorous. Wee Tian Beng also shows some of the bullying … but … but the bullying is also shown in a humorous light, which is definitely not how it reads in the original novel. Wee Tian Beng also fails to show the true extent of the bullying. And no where in the manhua is it shown, or even said, that Yang Guo was wandering around China, homeless, without any relatives or friends, surviving by any means necessary … when he was just eleven years old. Plotwise, is that detail important? No, not really. Is that detail important for Yang Guo’s character development. Oh hell yes it is.

The reader needs to feel Yang Guo’s pain to have the fullest experience of the story. As Todd Brown succinctly put it in his review of the 1983 TV series, Yang Guo “has been repeatedly abandoned and abused by the adults in his life, leaving him both desperate for approval and deeply distrustful.” While I do not enjoy reading about Yang Guo being bullied, abused, and neglected, it is a necessary foundation for everything that is done with Yang Guo’s character later. I love reading about teenage Yang Guo kicking everybody’s ass because I know how much he suffered as a boy. Without that suffering …. I care a lot less about Yang Guo.

Furthermore, Wee Tian Beng also messed up the scene which made me fall in love with Shēn Diāo Xiá Lǚ. Specifically, the first fight with Li Mochou in the Tomb of Living Death. I cannot get into details without spoilers, so let’s just say that I love the scene because it feels like it was ripped straight from a fairy tale, spiked with the kind of melodrama found in classic shoujo manga. First of all, Wee Tian Beng completely takes out the buildup to the fight. That is not horrible, but it does make things seem rather sudden. But—and this is what really bothers me—he also took the most dramatic, fairy-talish moment out. That just killed the scene for me.

So, between the way Yang Guo’s childhood was (not) shown and what it did to one of my favourite scenes, I was set to hate this adaptation.

Then, about a third of the way through, this manhua started being a lot more faithful to the novel. It started to include many of the things which The Legendary Couple left out, including some of the subtle little details. Of course, the subtler details matches the subtler art. And I found myself sucked back into the story again. I relived the experience of the novel, but I think even if I had not read the novel, this manhua would have still sucked me in.

For example, I think that this adaptation did another one of my favourite scenes—the trip Guo Jing and Yang Guo make to the Mongol camp—better than The Legendary Couple. Generally, I felt that The Legendary Couple gave the relationship between Guo Jing and Yang Guo short shrift, but because it glosses over it rather than actively butchers it, it did not bother me as much as what Wee Tian Beng’s Return of the Condor Heroes did to the first fight in the Tomb of Living Death. Yet … this is one of those scenes where Yang Guo’s childhood suffering is very relevant. I love this scene because, in the novel, the suspense and the intensity made my heart leap into my throat. However, cutting back on Yang Guo’s childhood cuts the suspense and intensity of this scene, so while I appreciate Wee Tian Beng giving this scene a fuller treatment that Tony Wong, I cannot say “well done.”

Overall, this manhua is quite good at capturing the quiet melancholy of the story, as well has having the richest versions of the characters of any of the manhua reviewed thus far. And the melancholy is quite beautiful.

While the story certainly has plenty of subtlety and quiet melancholy, some parts have all of the subtlely of a sword pierced through the chest (wrong novel, I know). While The Legendary Couple was not subtle, it could pierce. I don’t think Wee Tian Beng’s Return of the Condor Heroes ever manages to be sufficiently sharp during those moments. Three examples:

Example 1: There is a scene where a father threatens to cut off his daughter’s arm. In The Legendary Couple, there is a full-page panel dedicated to this moment, highlighting the father’s intent and the daughter’s terror. In Wee Tian Being’s Return of the Condor Heroes, this moment is not shown as being particularly special. I actually like the way he draws the father’s calm resolve, however the daughter does not seem to be really terrified.

Example 2: (WARNING: if discussion of sexual assault triggers you, skip to Example 3) There is a rape scene. Here is what I was thinking when I read the rape scene in Wee Tian Beng’s Return of the Condor Heroes:

“She looks so lovely and vulnerable … that’s a nice use of shadow … what a beautiful night, with the stars and the trees.”

This is what I was thinking when I read the rape scene in The Legendary Couple:

I will let you draw your own conclusions about which manhua evoked a more appropriate response to the rape scene.

Example 3: At one point in the story, a character’s hair turns white in the course of a single night. 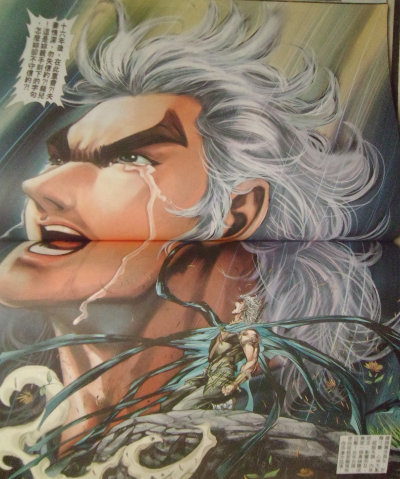 This is the same moment in Wee Tian Beng’s Return of the Condor Heroes. 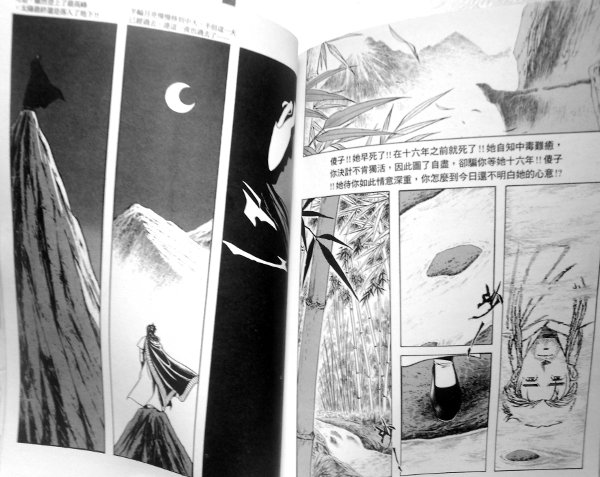 Some people might prefer Wee Tian Beng’s quieter interpretation, but I think that if somebody has experienced something so horrible that his hair turns white in one night, exclamation points are called for. Generally, I feel that The Legendary Couple was much better at punching out the exclamation points.

Wee Tian Beng’s Return of the Condor Heroes is the only manhua adaptation of the Condor Trilogy which has been completely published in English. The publisher claims to still have the English-language edition for sale, but I have not personally confirmed this.

Because of the problems with the first part of this manhua, I do not recommend making this one’s first contact with Shēn Diāo Xiá Lǚ.

What I highly recommend for lovers of Asian comics is reading the seven ComicsOne volumes of The Legendary Couple first, and then proceed to read this. That is a nearly ideal manhua experience—ComicsOne edition cuts off right around the point Wee Tian Beng’s Return of the Condor Heroes starts being better than The Legendary Couple, and readers can experience both interpretations of the story.

Of course, if you can, you really should read the novel. While both of the manhua adaptations are fine, neither can match the experience of the original.

Which do you think you would prefer, The Legendary Couple or Return of the Condor Heroes?

Sara K. loves dancing. She has taken ballet, swing, modern, jazz, Afro-Haitian, and noh dance classes. However, the dance of her dreams is tap dance. Of course, she thinks Swan is fantastic, and she also appreciates the way the characters in Wee Tian Beng’s Return of the Condor Heroes look like they are dancing.