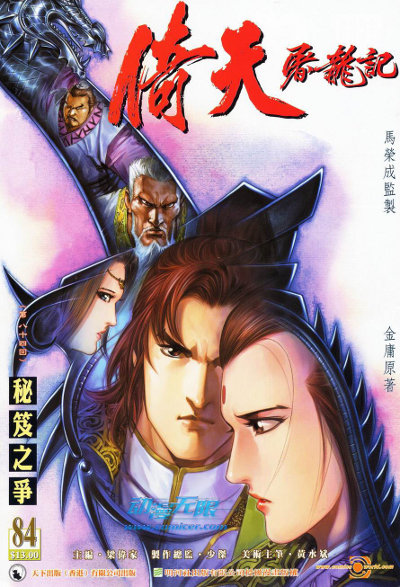 This is part four in a series of posts about the Condor Trilogy in Manhua. The previous posts are Introduction, Fighting, Tony Wong’s The Eagle-Shooting Heroes, and The Legendary Couple.

This manhua is by Ma Wing-shing, who is Hong Kong’s next most significant wuxia manhua artist after Tony Wong.

Whereas the other novels in the trilogy have been adapted multiple times into manhua, this is the only manhua adaptation of Yǐ Tiān Tú Lóng Jì. Poor Zhang Wuji, nobody loves him. Well, maybe my friend loves him. She kept on asking me what I thought about him as I read the novel (“Isn’t he wonderful?” “Ummm, he’s still twelve years old” “Just wait until he becomes a man!”)

Speaking of Zhang Wuji and female attention, let’s check out his wedding. 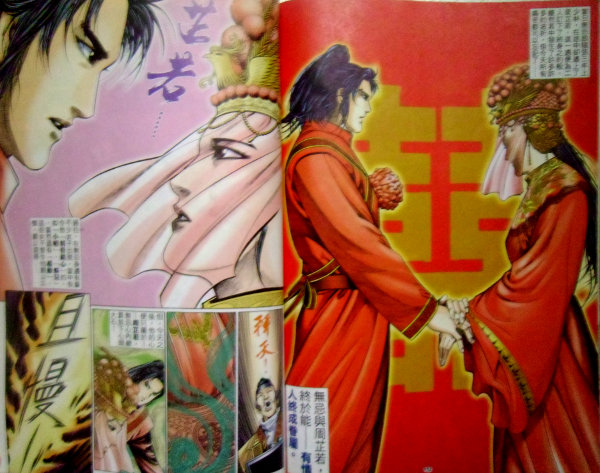 The young couple is getting married. And they love each other. They really do. This must be a happy scene where nothing goes wrong… 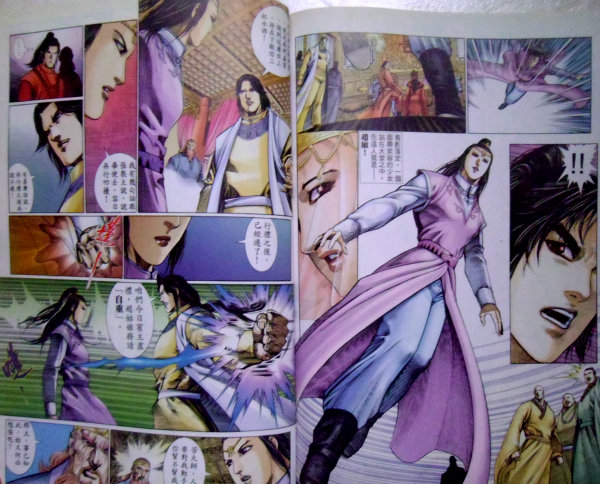 … aside from a Mongolian princess barging in. 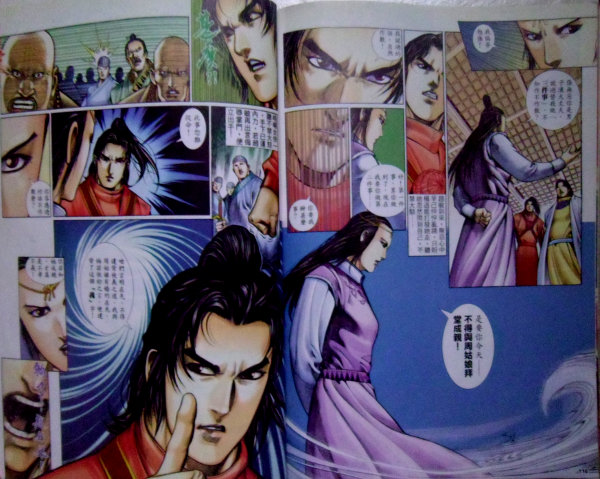 The Mongolian princess asks the groom to jilt the bride. The groom says that if he did that, he would be a jerk. 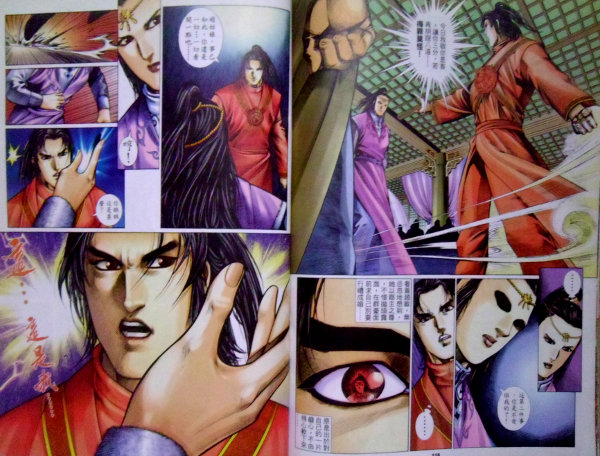 The Mongolian princess seems to have something in her hand. Whatever it is, it makes the Chinese groom change his tune. 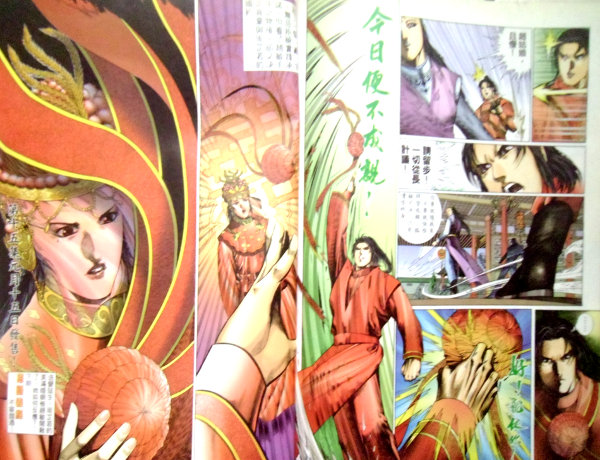 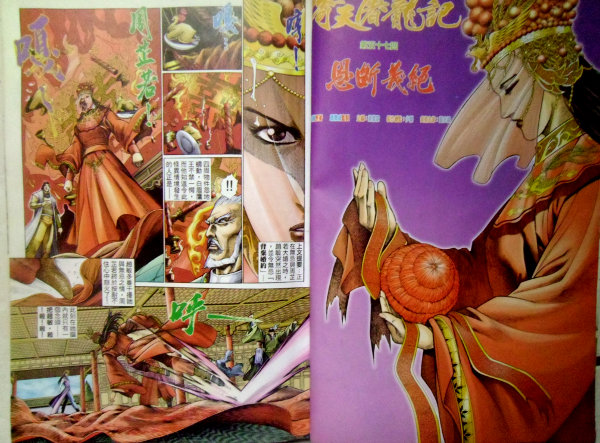 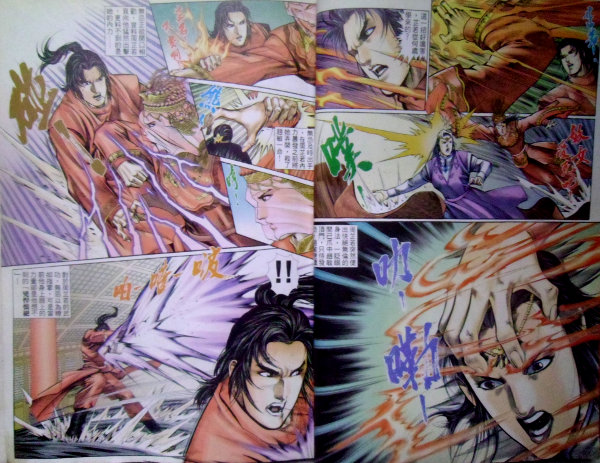 *sigh* Bride, you’re not going to score any points if you beat up a helpless princess who … poisoned and kidnapped a bunch of the world’s most powerful martial artists … is the best schemer in the story … can get Zhang Wuji to crack a joke (before the Mongol princess showed up, I was under the impression that Zhang Wuji didn’t have a sense a humor) … okay, bride, if you take down the princess, you score ALL the points. 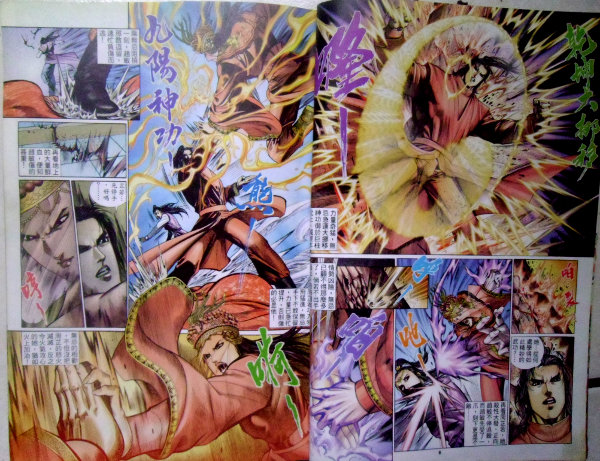 Given a choice between a Mongol princess who is trying to ruin his wedding and previously tried to kill him and his companions, and a woman that he loves and wants to marry, the groom is of course siding with the Mongol princess. 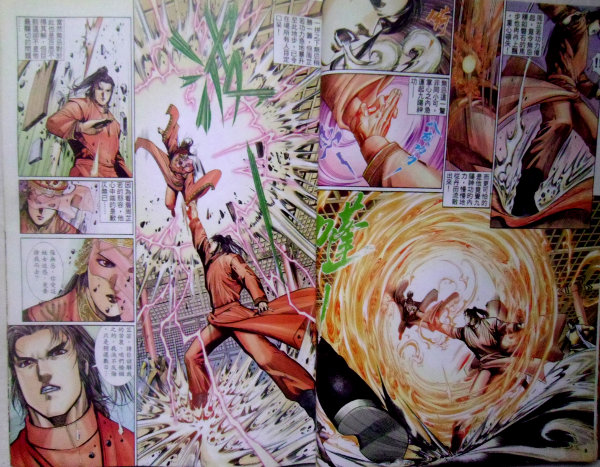 You know, I think most weddings would be improved if the bride and groom decided to break out into a kung-fu match in the midst of the ceremony. Too bad that this couple seems to be fighting for real. 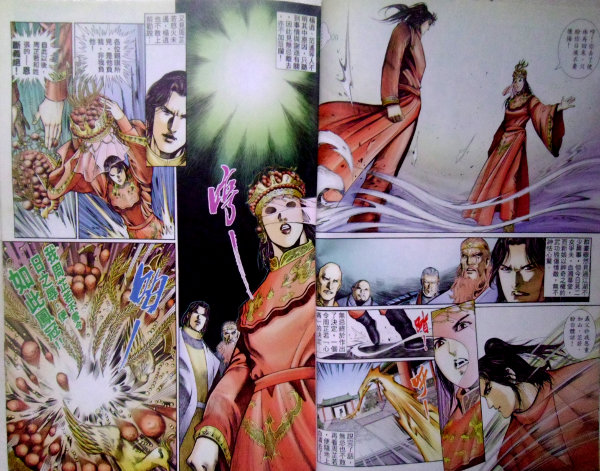 Apparently the wedding is now messed up beyond all repair. 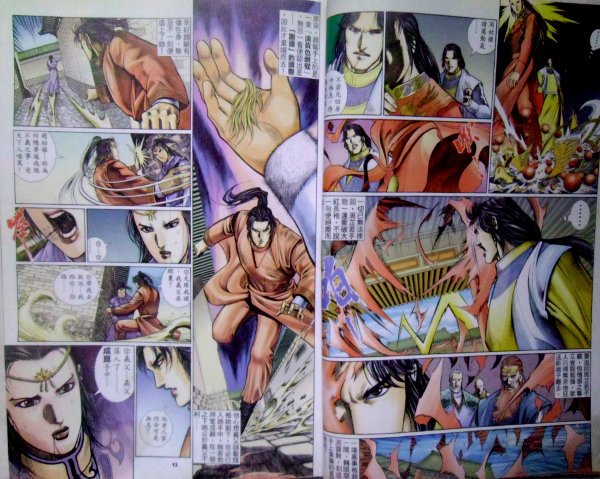 The manhua is paced very differently from the novel. Even though this manhua is 25 volumes long (Taiwan edition), the first 75% of the novel gets covered in the first 5 volumes, though some of the early scenes in the novel appear later in the manhua as flashbacks. Considering that the first half of the novel is about as brisk as rush hour traffic, this is not exactly a bad thing. Even so, the sheer speed did make me a little dizzy. The last three chapters of the novel, however, are covered in about 6 volumes, which allows much more room for nuance. While I will not say that the last three chapters are the best three chapters, the last fourth of the novel is certainly the best part, so I cannot exactly argue with this either.

However, while the pacing of the manhua is completely different from the novel, the plot is pretty much the same. Like every other adaptation of the Condor Trilogy, some details are left out. Yes, some of the moments which are missing are my personal favorites, but that’s always going to happen and I can always re-read the novels if I so wish.

Yǐ Tiān Tú Lóng Jì has less humor than the other parts of the trilogy, but whatever humor the story has, this manhua manages to kill it. For example, the socks scene is utterly serious—and I don’t mean that it is done deadpan style. It simply is not funny in the manhua. The only humor in this manhua is unintentional—such as the wedding scene described above (to be fair, I thought the wedding scene was quite funny in the original novel too, and I do not think that was Jin Yong’s intent).

Generally, out of all of the Condor Trilogy manhua, this was the hardest one for me to get involved in the story. There were points when I got involved, but it felt like I was recalling how a given scene made me feel in the original novel rather than re-experiencing the scene anew. I think this is mainly an art issue, because aside from the pacing, timing, and some simplifications, the dialogue and the plot of the manhua are not that different from the novel. 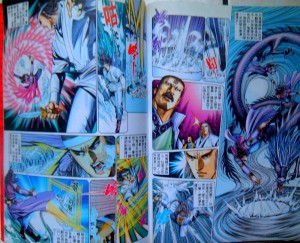 Ma has a more gritty-realistic style than Tony Wong. Though he can use an abundance of flourishes when he wishes, they do not have the eye-candy feel of Tony Wong’s visual flourishes. While the characters in Tony Wong’s manhua often seem to have a light spring to their steps, Ma’s characters move in a more grounded manner. Overall, where Tony Wong’s art expresses exuberance, Ma’s art expresses restraint—a restraint which sometimes bursts into an explosion of glory. And to be honest, I have trouble imagining a Tong Wong adaptation of Yǐ Tiān Tú Lóng Jì. While Tony Wong expresses excitement—whether of joy or angst—quite well, he is not so adept at expressing solemn, heavy feelings. Thus, I feel that the right artists were chosen for the right adaptations. 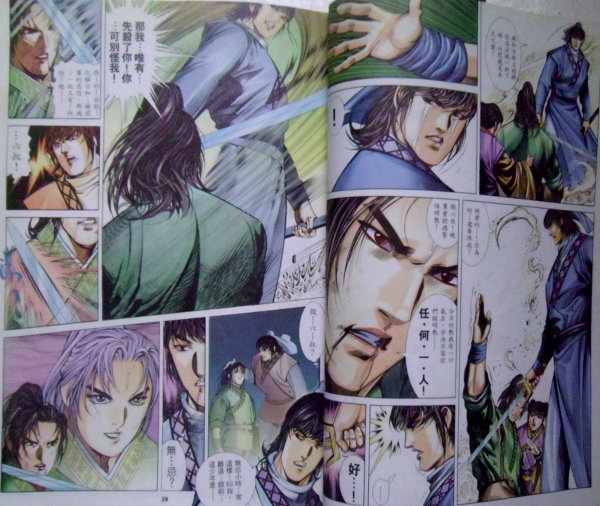 Because the manhua tries to cover the first three-fourths of the novel so quickly, the art is in rapid plot-exposition mode—which means there are a lot of talking heads. In the hands of an artist who is great at drawing talking heads, that would be sweet. Ma Wing-shing is not that kind of artist. Not only do the characters constantly seem to be wearing the same stoic expression, but they often look just like each other. I think that depicting the characters as constantly having a stoic expression is an interesting way to interpret Yǐ Tiān Tú Lóng Jì—but when you’re mostly seeing talking heads, it looks really monotonous. 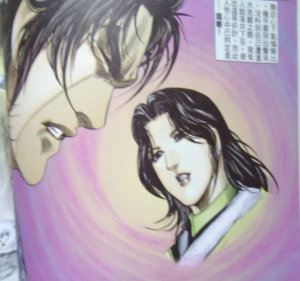 This moment is supposed to be full of feeling, but because the faces look just the same as they do in pretty much every other moment, I find it hard to feel the feeling.

However, while Ma is not good at expressing character through face or body, he can express the character’s inner life through composition, color, and motion. 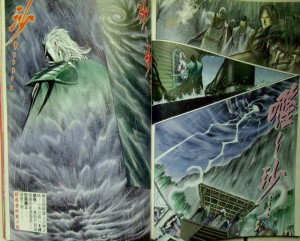 For example, you can tell by the blues, the rain, the way the figure’s back is turned as his body fades into the storm, that this a sad, solemn moment. 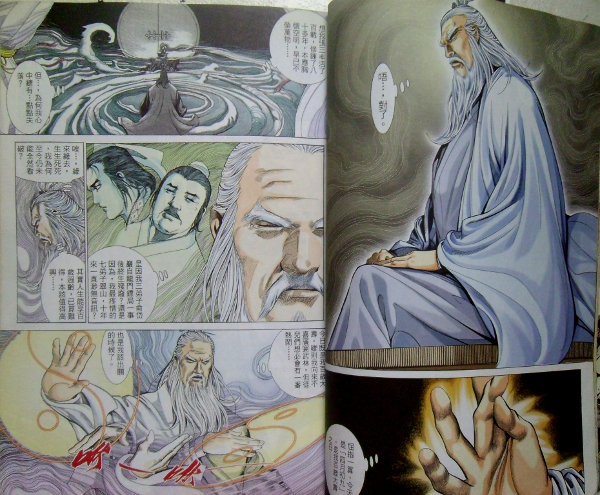 But to express things through composition and color, one needs a high-page-to-plot ratio. Such a ratio does not exist in the first half in the manhua. There were flashes of Ma’s visual genius, even in the first half, but they were quickly buried in a sea of talking heads. 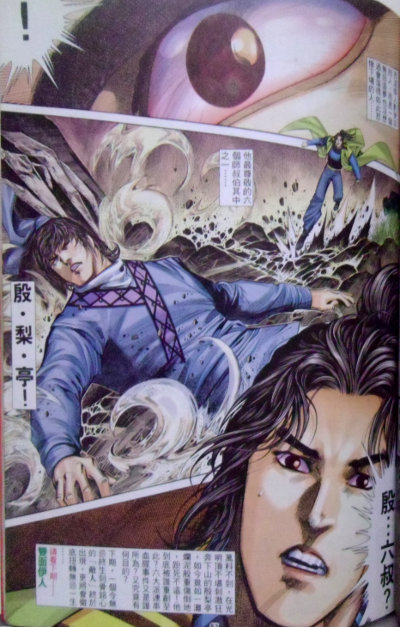 But when the page-to-plot ratio goes up? Ma demonstrates why he is one of Hong Kong’s most celebrated manhua artists. The last 8 or so volumes are GORGEOUS. When I say they are gorgeous, I mean they are full of pages like this (click to see them in larger size): 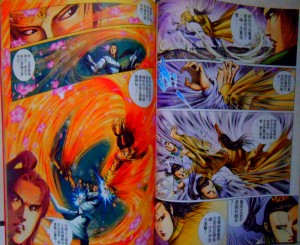 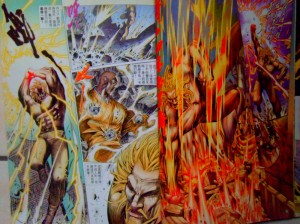 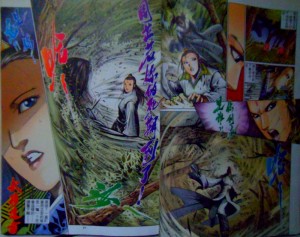 I am tempted to say that if Ma had expanded this story over more pages, the entire manhua could have been visually amazing. But I suspect Ma needed to be inspired to show his true capabilities, and that the first part of the story did not inspire him.

Please forgive my poor digital camera – it does not do the artwork justice.

More Thoughts on the Adaptation

This is my least favourite of the manhua adaptations of the Condor Trilogy.

The last fourth of the original novel kept my jaw fixed in a state of drop until it was over. When the manhua adaptation made my jaw drop, it was always because the art was stunning, not because the story swept me up again.

Perhaps the art and the story failed to connect because there was no focus. I would have been happy to read a manhua adaptation of Yǐ Tiān Tú Lóng Jì which threw the story to hell and focused on fantastic fight scenes—and I think Ma could have delivered such a version. I might also enjoy a manhua adaptation which focuses on the romance—as one can probably tell by my commentary on the wedding scene, I would have a lot of fun with that version.

The manhua adaptation I would really like to see is one which delved into the commentary on society and politics. Hong Kong wuxia manhua uses plenty of visual metaphors and flourishes to flesh out the battles. Why not use those visual metaphors and flourishes to flesh out the socio-political allegory? Yǐ Tiān Tú Lóng Jì would be the perfect story for this treatment. The title literally means “Relying on Heaven to Kill the Dragon Tale” and is usually interpreted to mean that when the emperor (dragon) is bad, the people who support justice (heaven) will remove him. And there are two blades—the Heaven Sword and the Dragon Sabre—which carry this metaphor throughout the story. Why not build on that? I think sequential art is the perfect medium for examining this side of the story. Alas, this manhua does not try to go there and mostly takes the story at face value.

And I think that might be the thing. This adaptation sticks too close to the surface. It is reasonably faithful to the letter of the story—more so than the Tony Wong adaptations. But it does not try to dig into any aspect of the story—not the battles, not the romance, not the camaraderie, not the social commentary, not the tragedy, and so forth. I already know the story, so I am not terribly interested in a shallow overview.

11 volumes of this manhua were published in English by ComicOne. They are out of print, and seem a little harder/more expensive to get than The Legendary Couple, but are apparently not too difficult to acquire. I do not know how the ComicOne volumes correspond to the Taiwan edition. Having only read the Taiwan edition, I also cannot comment on the translation.

I think the only people who should read the ComicOne edition are people who really want to experience the story of Yǐ Tiān Tú Lóng Jì in a printed medium and cannot read the novel. It is actually not a terrible adaptation, and can give one a sense of the story, even though it cannot replace the experience of reading the novel.

Everyone else—Yǐ Tiān Tú Lóng Jì fans, Ma Wing-shing fans, and so forth, should go straight to one of the Chinese-language editions, regardless of one’s Chinese reading ability or lack thereof. If one wishes to invest money in this manhua, there is no reason to deny oneself the splendor of the late volumes.

Speaking of gorgeous art, the question is:

Whose art style do you prefer, Tony Wong’s or Ma Wing-shing’s?

Sara K. has tried martial arts herself. She has taken kickboxing and Tai Chi (Chen style) classes, and has gone up to green belt in Tae Kwon Do. She is slow and her arms are weak. She is flexible, has a good sense of balance, and has powerful legs. If she found herself in hand-to-hand combat, she would use her arms mostly for defense and use her legs mostly for offense. Her bones have an unusual structure, which means that certain arm twists which work on most people do not work on her (and would offer her an excellent opportunity to send her opponent a surprise elbow jab), however her unusual bone structure also makes her more prone to injuries in general. If she were to study a new martial art, she would choose archery.