To see an example scene, please refer to the second post in this series, The Condor Trilogy in Manhua: Fighting. 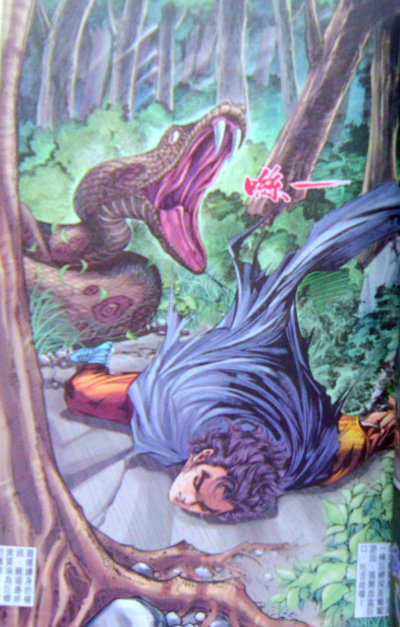 The style of The Legendary Couple, unsurprisingly, has a lot in common with Tony Wong’s Eagle-Shooting Heroes, but is less spectacular than the latter. The fights in The Legendary Couple are simpler and shorter—yet they are more confusing. There is less contrast to help readers quickly distinguish the various elements. That’s a pity, because I generally find the fights in Shēn Diāo Xiá Lǚ to be more engaging than the fights in Shè Diāo Yīngxióng Zhuàn. 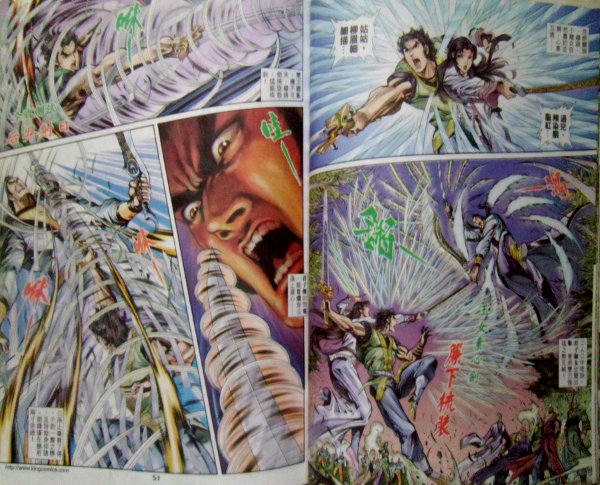 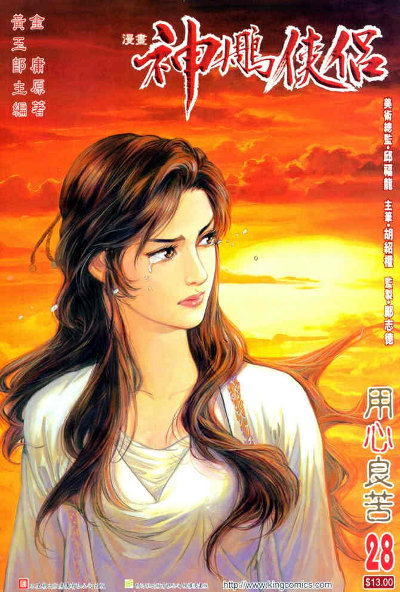 Almost everything in this manhua seems to happen at sunset or in the early evening. That’s rather appropriate. More than the other two parts of the trilogy, the second part is about things falling apart. Song China is collapsing under the weight of Mongol invasion. The main characters’ personal lives are constantly tottering on the brink of collapse, more so than in the other parts of the trilogy. The sunset and evening colors do help pull out the angst and melancholy. 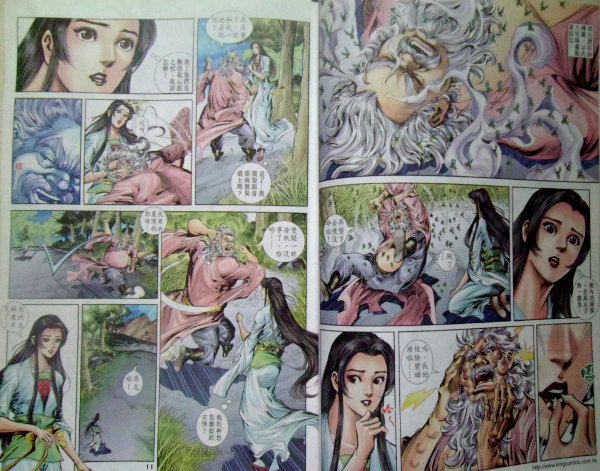 Something that really comes through in this adaptation is how well Tony Wong can express characters through art. Comparing this with The Eagle-Shooting Heroes, I don’t think the characters are actually drawn better in The Legendary Couple … but because the other elements of the art draw less attention, there is much more focus on the characters. Their movements are lively, but most importantly, the drawings clearly expose the characters’ feelings. 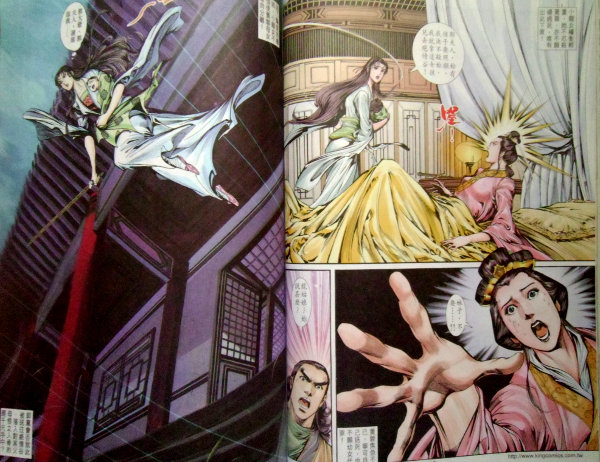 As soon as Huang Rong has finished giving birth, Xiaolongnü prompty kidnaps her newborn daughter. If that's not melodrama, I do not know what is.

What Tony Wong really does better in The Legendary Couple than in The Eagle-Shooting Heroes is hitting the high notes of the drama through art. 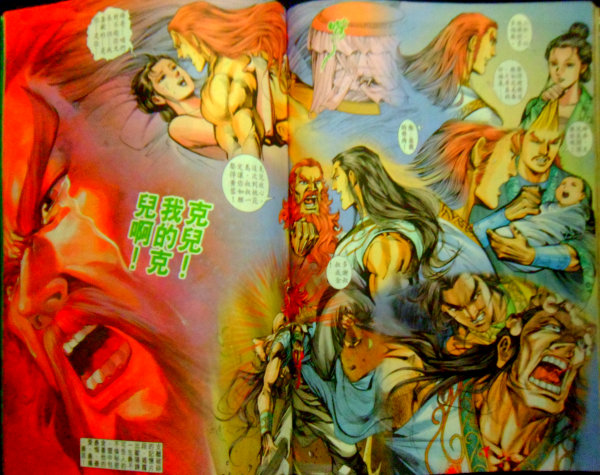 I particularly like the collages Tony Wong draws when characters are remembering earlier events. 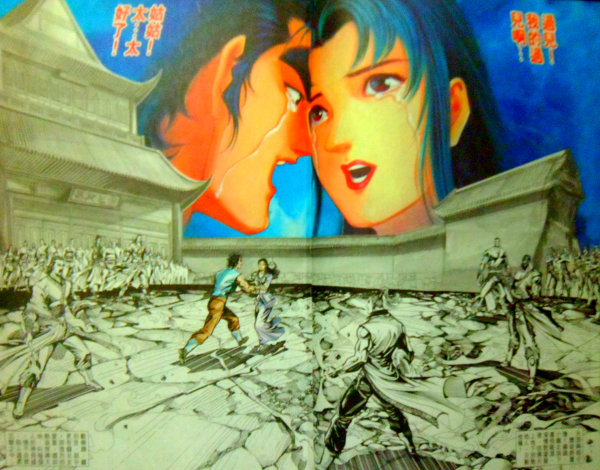 And there are various visual gems throughout the manhua—for example, this use of color vs. black and white to show how these two characters only see each other and are unaware of their surroundings. 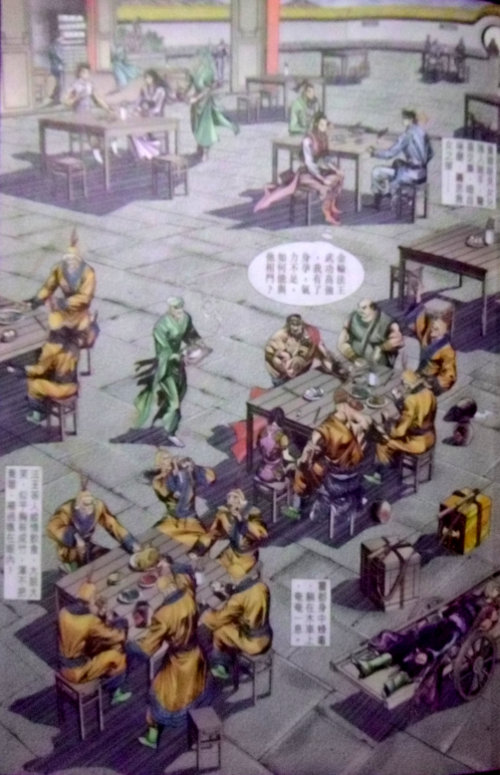 And this is one of my favourite pages in the entire manhua because it really lets the reader put the scene together—but first, this page needs some labels. 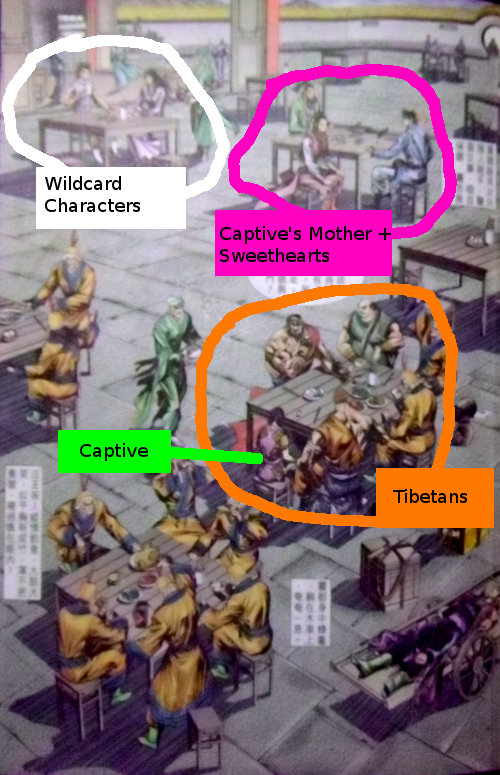 This page so perfectly captures the tension of this moment. The captive’s mother and sweethearts want to rescue her … but they also do not want her to get hurt, which is why they are staring at the Tibetans instead of attacking them. The Tibetans know that they are being stared at, but are confident that they have the upper hand. Everybody is too preoccupied to notice the people in the top-left corner of the page … but the wildcard characters are watching everything, unsure of what they want. Suffice to say, when the tension reaches a breaking point and the weapons come out, it’s the wildcard characters who decide the outcome.

While I prefer the art of Tony Wong’s The Eagle-Shooting Heroes for its sheer majestic sweep, I have to admit that the art in The Legendary Couple does a better job of supporting the story itself.

Whereas I was not able to quite lose myself to the story again in Tony Wong’s Eagle-Shooting Heroes, I did get involved in the story of Legendary Couple. It’s still a streamlined version, with some parts of the story changed and many bits removed. Some of the changes bother me (I cannot describe them without spoiling), but most of my quibbles are minor. Overall The Legendary Couple is a more complete version of second novel than Tony Wong’s The Eagle-Shooting Heroes is of the first novel. And I think that makes the difference.

It’s still not nearly as rich an experience as reading the original novel. The details left out in The Legendary Couple often come at the cost of the pathos and the depth of the characters. This adaptation is generally quite good at conveying the melodrama itself, but it is often not so good at conveying the other aspects of the story. The soft moments do not feel so soft, the quiet sad moments do not seem so quiet and sad, and in the joyful moments the joy feels a little muted. To be fair, the silly moments—at least the silly moments which were not cut out—are still quite silly in this adaptation. I think it is not the lack of drama which makes this adaptation feel a little thin—it’s the lack of the things which nuance the drama. Nonetheless, Shēn Diāo Xiá Lǚ is such a passionate novel that even a watered-down version of it can still hold its own against, say, 70s shoujo manga.

ComicsOne published 7 volumes of The Legendary Couple in English. They are now out of print, but apparently not hard to acquire. I do not know how the ComicsOne edition corresponds to the Hong Kong or Taiwan editions, so I am not sure how far into the manhua it goes. Based on the covers, the ComicsOne edition seems to cut off somewhere in the Hong Qigong/Ouyang Feng arc. There is another manhua adapted from Shēn Diāo Xiá Lǚ which has been fully published in English—not to mention that the 1983 live-action drama, the 2006 live-action drama, and the anime are all available with English subtitles—so it is certainly possible to continue the story in English after the ComicsOne edition cuts off.

Which would you rather read, Tony Wong’s The Eagle-Shooting Heroes or The Legendary Couple?

Sara K. has been travelling for the past few days (these blog posts are canned), so she has not been terribly responsive. She is now back in Taoyuan county, and should finally be replying to whatever comments people left. Currently, she is reading Demi-Gods and Semi-Devils (the novel, not the manhua, which also happened to be drawn by Tony Wong).