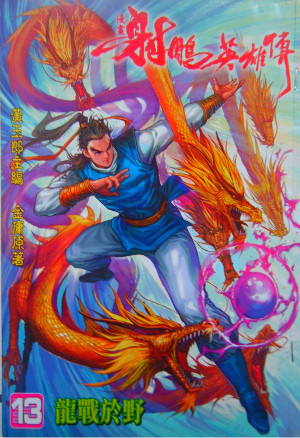 This is part three in a seven part series about the Condor Trilogy and its manhua adaptations.

Example Scene (be sure to click on the pictures for a bigger size!) 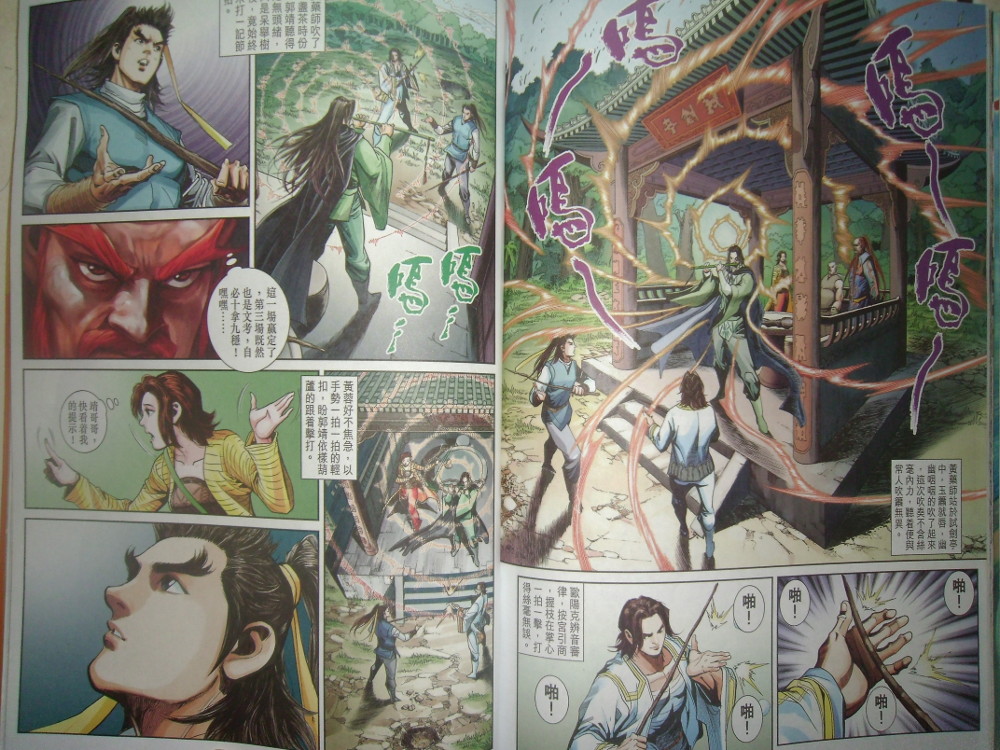 I really like the presence of swirling things in this manhua. The music coming from Huang Yaoshi’s flute is no exception. 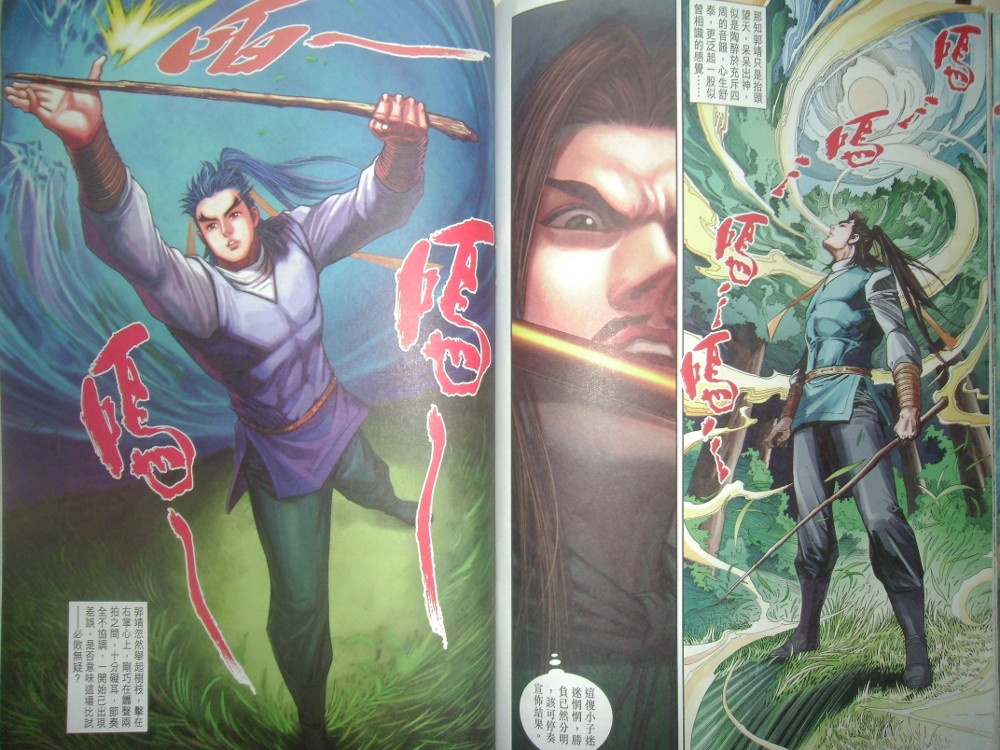 This manhua is occasionally punctuated with a page which is meant to pop. The “pop” pages usually are done in pastel, and consist of a single panel. However, even though the left page is the “pop” page, my favorite panel here Guo Jing on the right, as he stops worrying about the fact that he knows squat about music and just listens. It helps that there is yellow fog/music/something swirling around him in that panel. 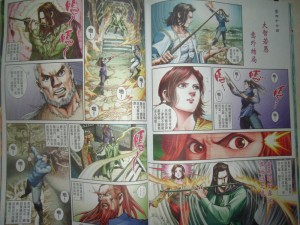 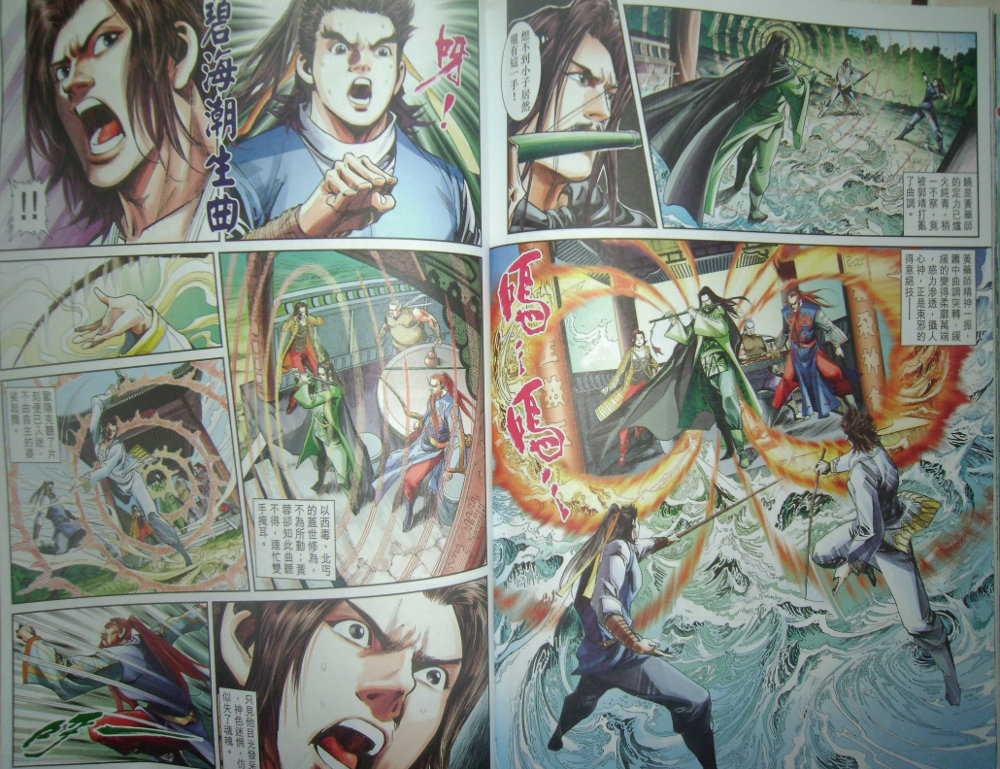 Yes! I love the copious use of visual metaphors to represent the action! Here, the sea represents the music. And notice how the orange sound waves contrast with the blue sea waves. The blue-orange color theme continues for the rest of the scene. 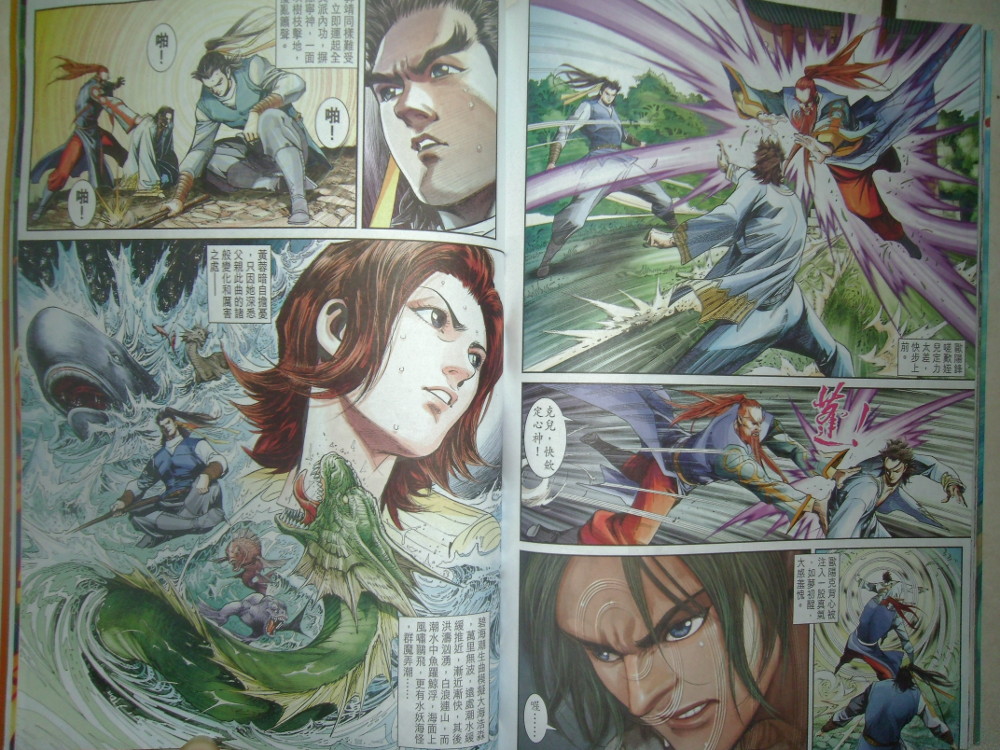 Look at the bottom-left panel. Not only has the sea metaphor been expanded to include a whale, fish, and dragons, but the way Huang Rong’s face pops in close up and at an angle makes this panel perfect. Her face connects the turbulence of the sea and Guo Jing’s tranquility. 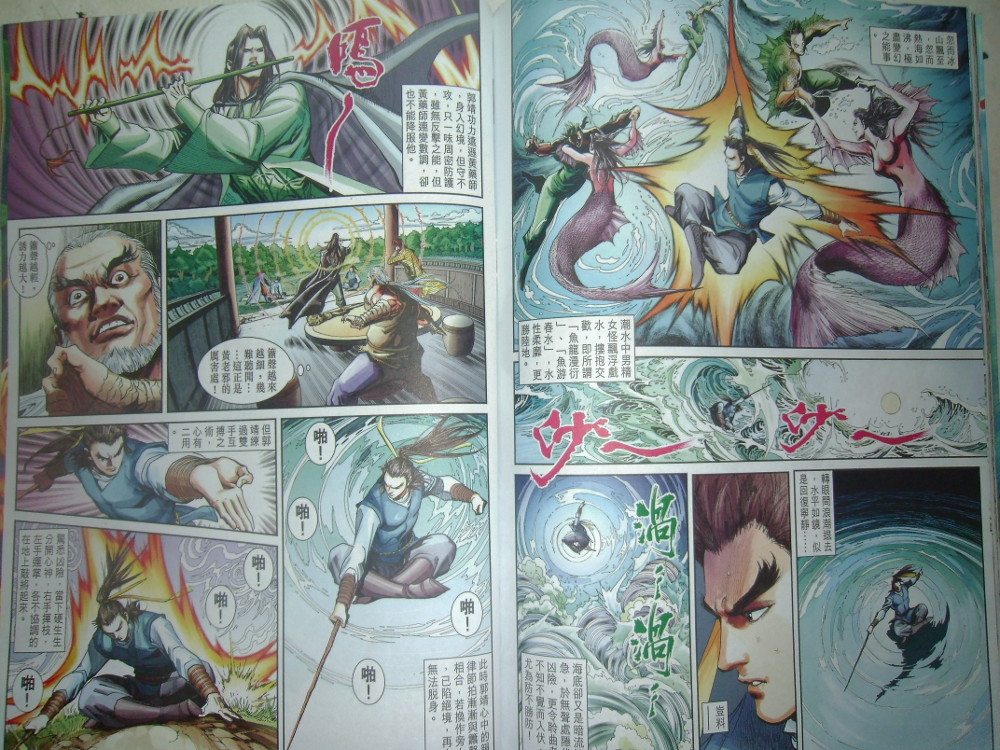 Notice how in the top-right panel, the sharp-pointed, orange, concave diamond Guo Jing is inside contrasts with the blue sea swirling around it. Guo Jing’s extended arms reinforce the pointy nature of the diamond, while the mer-people’s curved tails reinforce the wavy nature of the sea. It’s the multiple layers of visual contrast which makes that panel so dynamic—of course, it’s also pretty. 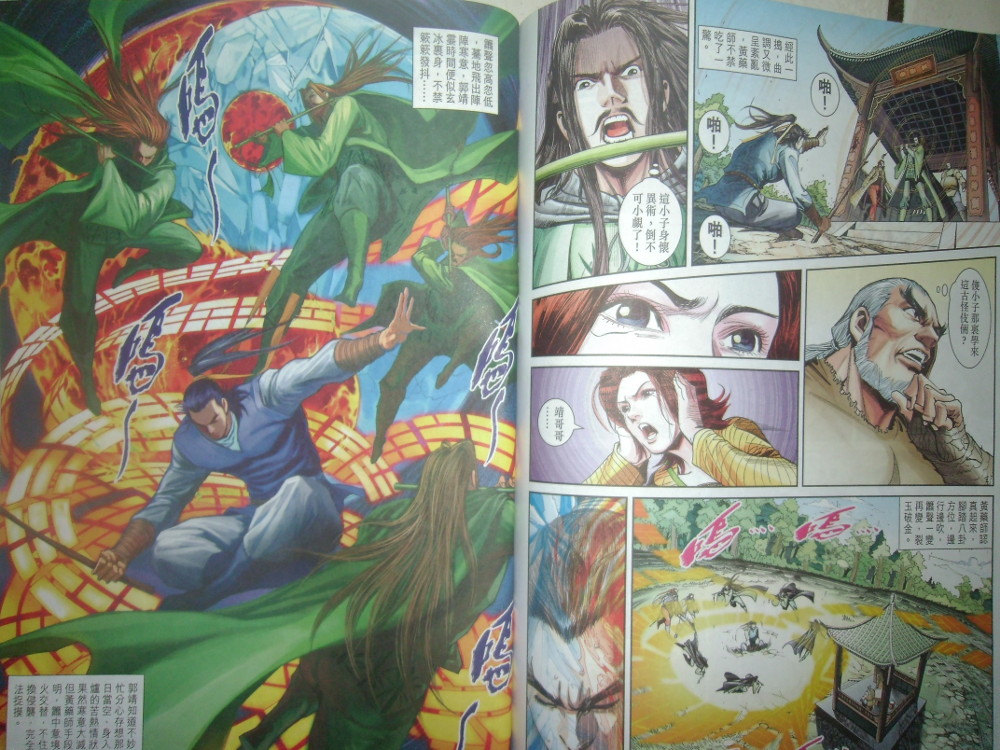 There are many things I can say of the page where Huang Yaoshi is dancing and playing the flute around the seated Guo Jing, but I’ll stick to the colors. Notice that Guo Jing is blue, which is the opposite color of the orange swirls around him—maximum contrast. Huang Yaoshi, of course, is green, which does not constrast quite so much with either blue or orange, so, colorwise, he forms a soft border. And to reinforce the theme of the blue/orange contrast, in the background there is a blue/orange yin-yang. 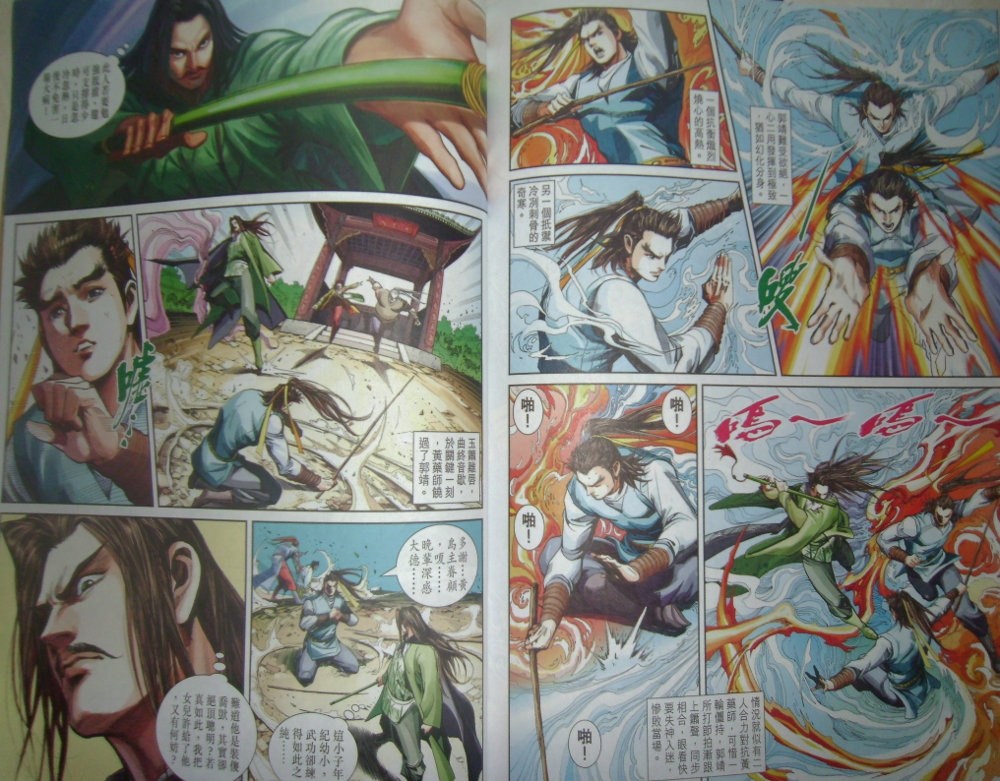 By now, you should appreciate how wonderful the swirls, color contrasts, and visual metaphors are. And yes, Guo Jing wins this round.

Tony Wong is called “the godfather of Hong Kong comics.” He has been publishing manhua since the age of 13, and has since become an institution of Hong Kong culture. More Jin Yong novels have been adapted by him than any other manhua artist.

This manhua, first published in 2007, is a relatively recent Tony Wong work, and he definitely had an army of assistants help him make this. That doesn’t matter. What matters is how good is it to read.

Once in the while, I have the pleasure of reading a comic where the art is so good that, after finishing a volume, I am compelled to immediately go back through the pages so that my eyes can rest some more upon the pictures. This manhua is one of those pleasures. 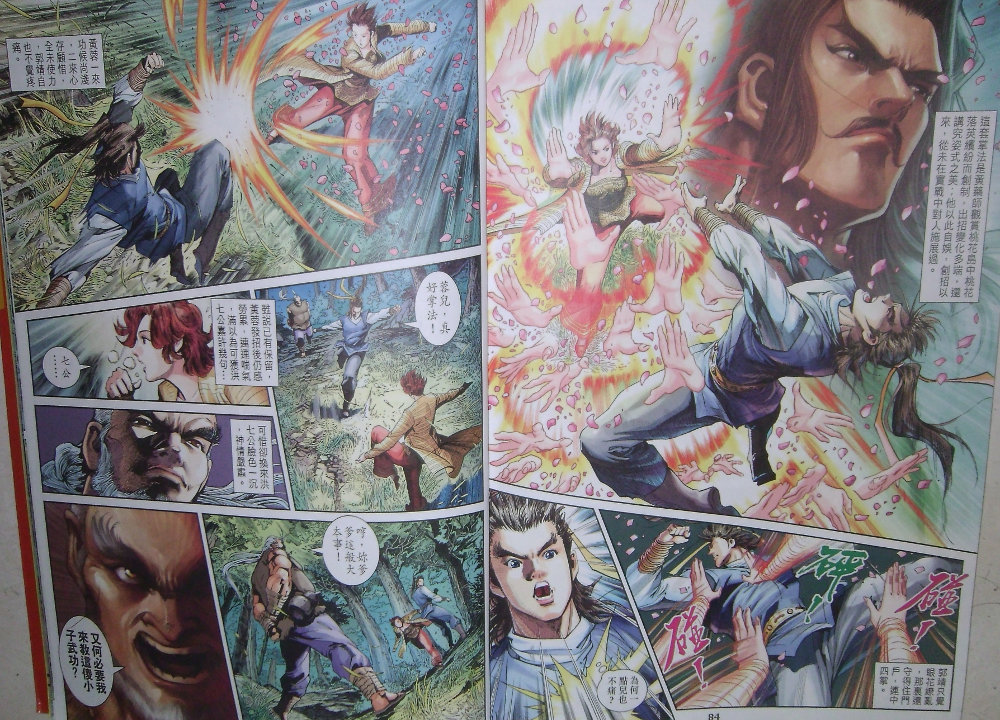 I am impressed by the way that the art manages to be detailed and complex without looking too busy. I am not completely sure how Tony Wong pulls it off, but I do have some ideas. First of all, this comic is in color. Tony Wong uses colors to increase the contrast between different things, which increases the level of detail each panel can sustain without losing the reader. Look at this page (and click on the picture to see it in full size!). 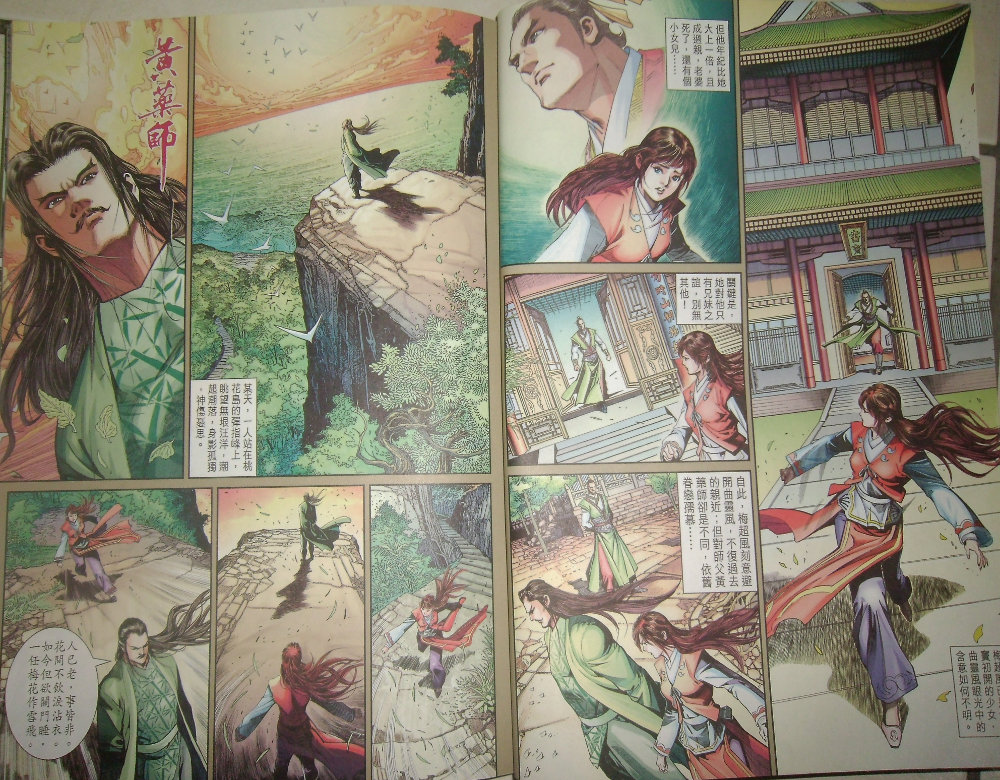 In this page, the main color theme is green against red-orange, two colors with a high contrast. This helps my eyes figure out quickly where one object begins and another one ends. While I didn’t notice it while casually reading the comic, looking through the pages again, I see than most scenes have 2-3 key colors which form a theme, which not only helps distinguish things inside a given scene, but also helps set that scene apart from the scenes with different color themes. 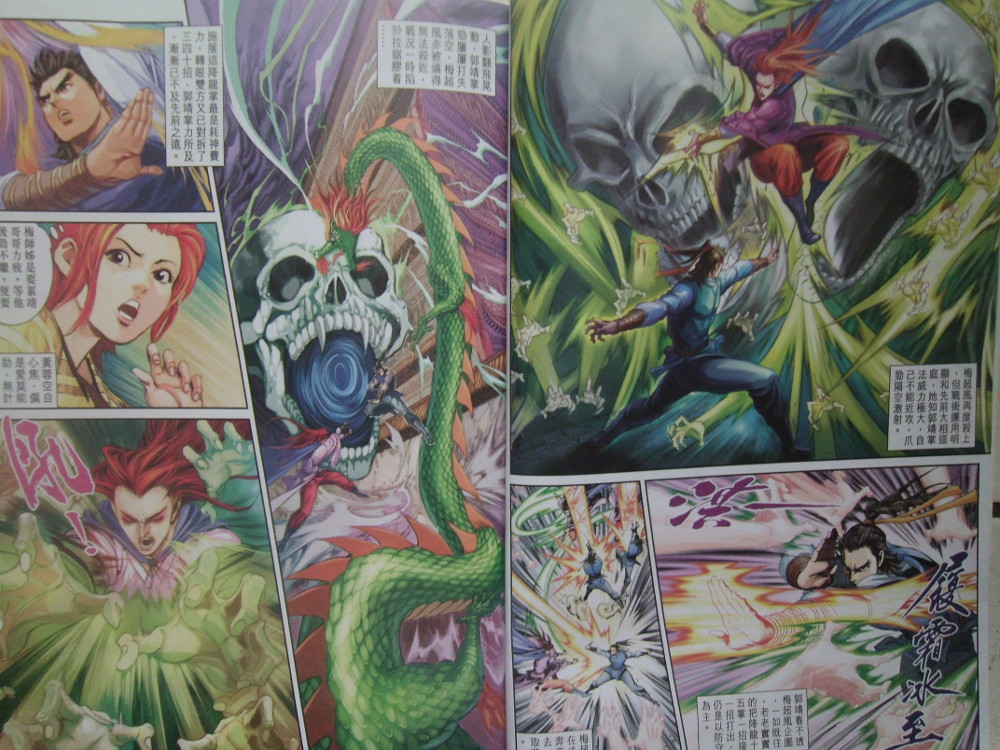 Especially impressive are the fight scenes, which in spite of being long and complicated, are lively, varied, and easy to follow. Looking at the extras sections, it becomes apparent that a lot of planning had to go into the battle scenes to get this result – there are illustrations of all Guo Jing performing all 18 of the “Eighteen Dragon Subduing Palms,” as well as Huang Rong performing all of “Dog Staff Technique” moves. Taking the time to distinguish every individual move helps a lot to keep the fights interesting and readable.

In addtion, the high level of detail supports many wonderful flourishes in the linework. Swirls and circles are in abundance, like frosting on the cake.

I also love the constant use of visual metaphor. There are little visual metaphors throughout the comic, like pretty little flower petals casually left in the wake of a pacing young lover saying “He loves me… he loves me not…” For example, this: 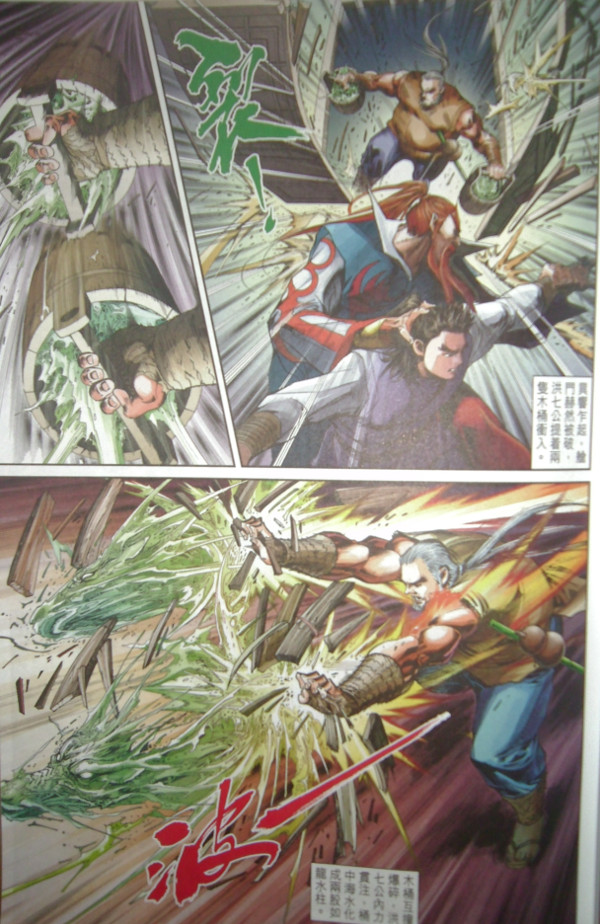 I love that Hong Qigong can turn buckets of water into dragons!

Of course, the big, bold visual metaphors come out when it’s time to fight! It helps the reader keep track of what’s going on, and even better, it’s exciting.

The artwork alternates between regular coloring and pastel work. At first, this jolted me a little, but I got used to it quickly. The pastels generally come out to emphasize the expression of a certain character or to highlight a key moment in a battle. Usually there is only one pastel panel every few pages or so, or a full single or double page spread done in pastel. When the pastels are used differently, it feels even more special. 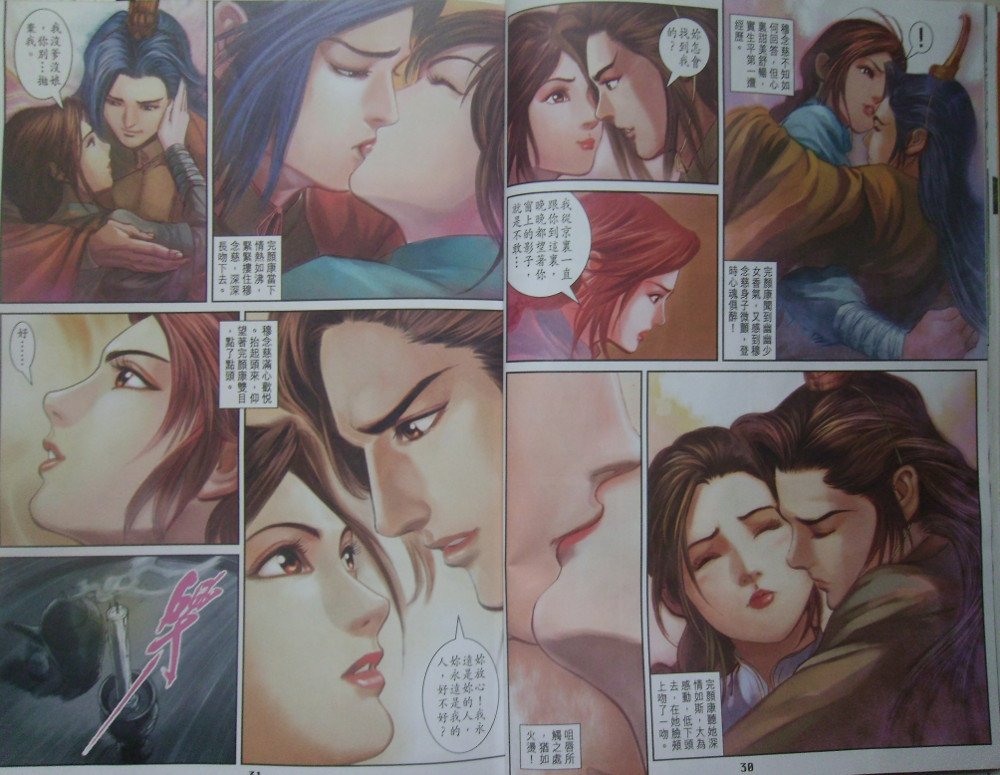 Seeing so many panels in pastel together really drives home that this is as special scene. And pastels are also warm, soft, and fluffy, like the characters’ feelings for each other. 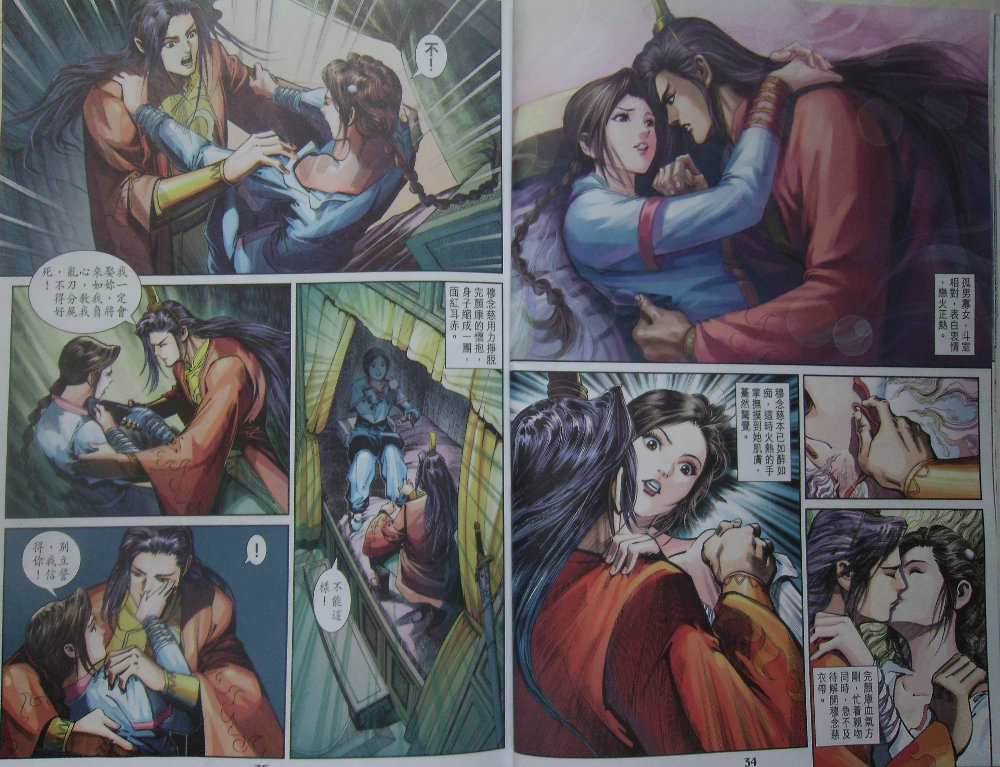 Wait a minute, the pastels are stopping. Uh oh… 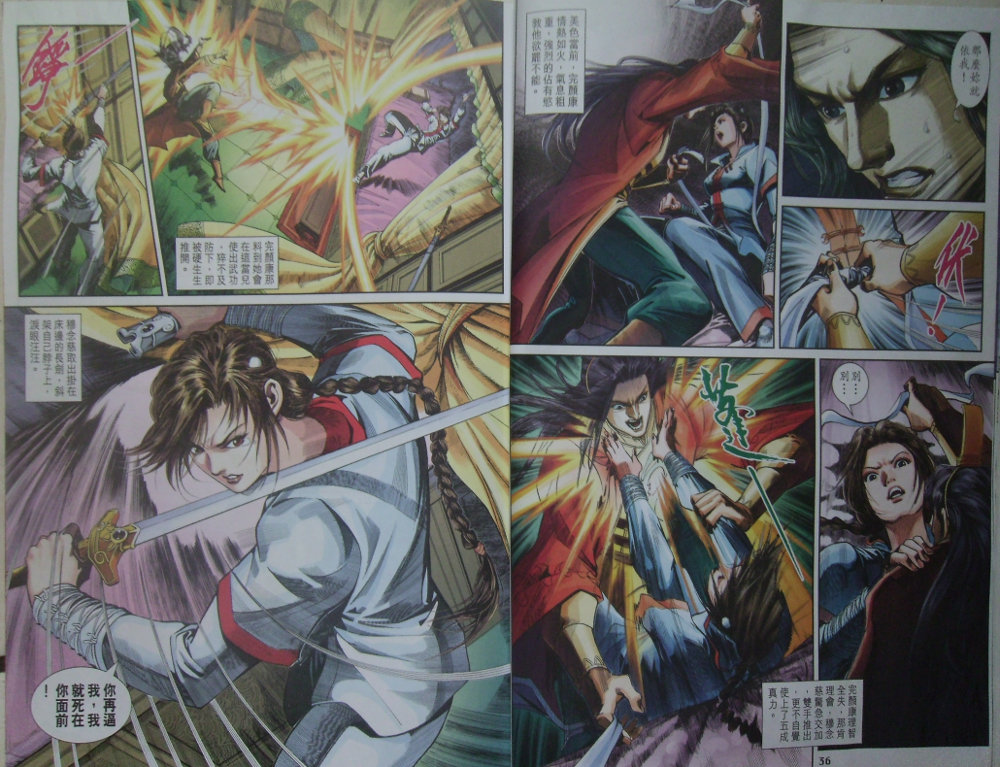 Yep, something is definitely wrong – in the story, I mean. There is nothing aesthetically wrong with the way Mu Nianci has poised a sword at her own throat.

While Tony Wong is not a master of showing subtle feelings or complex personalities through drawings, the characters all feel quite lively with a little spring in their step, keeping the energy level high.

And overall, the art evokes a greater-than-life grandeur. The frequent use of slanted angles makes the artwork more exciting, the costumes are often lovingly rendered, and palaces, islands, cliffs, and all sorts of grand sights make the world seem bigger than life.

This is the whirlwind edition of Shè Diāo Yīngxióng Zhuàn. The story has been greatly streamlined. Many details, and even some story arcs, have been removed, pretty much leaving just the essence of the plot intact. This allows the story to move—and move it does. Sometimes things happened so quickly that I felt like I got whiplash. However, the fast pace keeps the energy high, and makes the comic all the more sweeping.

There is also a strong emphasis on the battles. Many battles run 20+ pages. This allows Tony Wong room to fully flesh out the battles with sophisticated yet easy to understand moves. The battles are a lot of fun to read.

However, because the story has been so stripped down and the battles are given so much room, the characters and the pathos are greatly dimished. While the characters do not ring false, with so many details removed, they feel much less rich than in the original novel. And while the characters are given many pages to punch each other, the scenes which are meant to punch the readers in the heart often only run 4-10 pages. This is not really enough pages to let the impact sink in, especially when the reader is quickly swept to the next event. I do not think this adaptation of Shè Diāo Yīngxióng Zhuàn will make anybody weep.

One exception is the backstory of Yi Deng, Yin Gu, and Wan Botong. This manhua actually goes into their history in greater detail than the original novel, and gives sufficient room for the reader to feel the tragedy. That said, this manhua still did not make my eyes wet with this story arc, whereas the original novel did.

In short, this adaptation fails to bring out the melancholy, tragedy, and passion of the original story … and succeeds at bringing out the fun and excitement with flying colors. 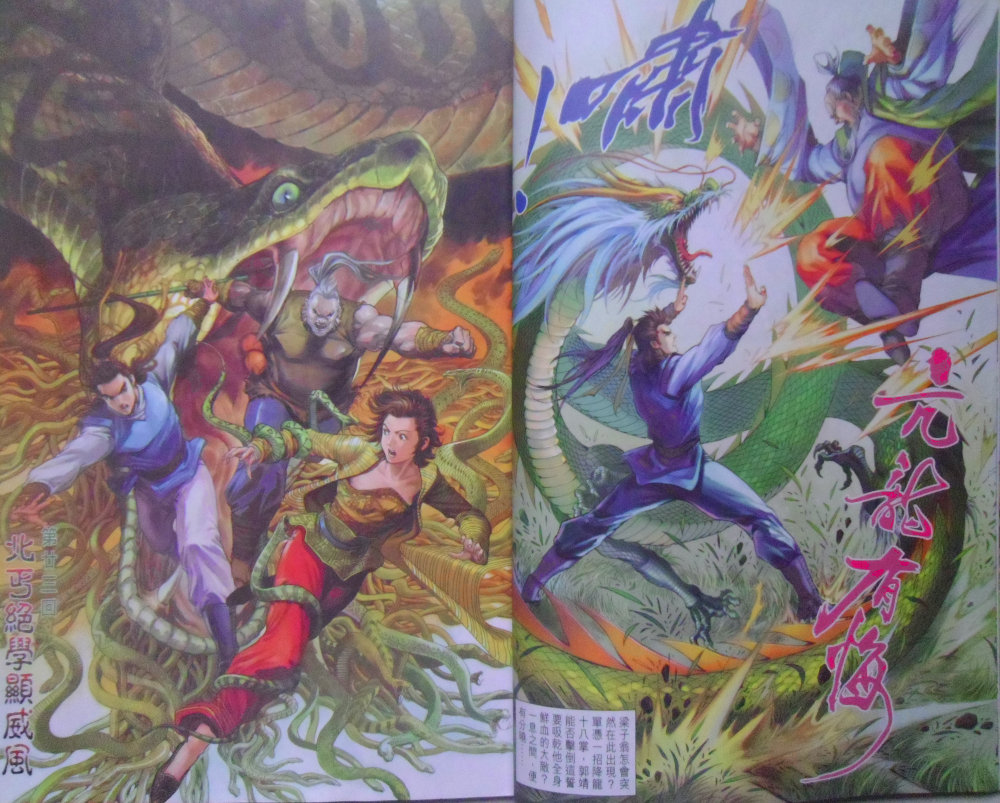 This manhua, to the best of my knowledge, is totally unavailable in English, or any language other than Chinese. That is not a big deal. If one already knows the story of Shè Diāo Yīngxióng Zhuàn, understanding the dialogue is unnecessary.

I only recommend this manhua for fans of Shè Diāo Yīngxióng Zhuàn. Much of the story has been gutted—I think it would be very hard to get involved in characters’ struggles if this was a reader’s first contact with the story.

For me, this manhua truly was a pleasure to read. It made Jianghu look more lovely, spectacular, and wonderful than it ever looked inside my own head. It was like watching a friend coming to the ball looking like the most fabulous person in the world. Thank you, Tony Wong, for expanding my imagination.

Which brings me to the discussion question:

Which adaptations have you seen or read which, while clearly inferior to the original work, expanded your imagination or showed new sides of the story?

Sara K. has previously written for Manga Bookshelf: Why You Should Read Evyione Part 1 & Part 2, Mary Stayed Out All Night, and The Geeky Heart of Taipei. Her personal blog is The Notes Which Do Not Fit, though there is not much about comics or East Asian pop culture over there. She is a vegan, atheist, Linux user, ace, loudmouth, and the person in the back of the classroom who is always clicking her pen.