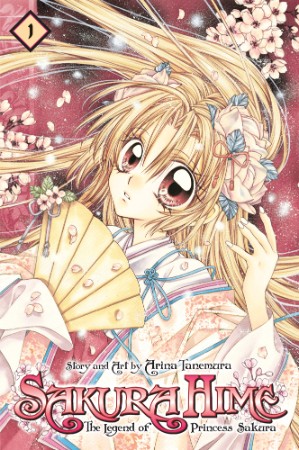 I think I might have just hit my first brick wall in reviewing shoujo. I’ve found a title that I really, really like that I’m confused by at times. The cast is grand, but one or two of them drive me nuts and it doesn’t help that I’m unfamiliar with the time period in which it’s set. The title is Sakura Hime and this is going to be all over the place, okay, so please bear with me. Please?

The story revolves around Sakura, a fourteen year old girl who is betrothed to Aoba, the second in power next to the Togu (person in charge?). Anyway, from what I can gather, the Togu is the Emperor Palpatine and Aoba is Darth Vader. Sakura and Aoba have never met, though they have communicated through letters. Anyway, Sakura is descended from a princess who once came from (and has gone back to) the Moon, is charged with defeating Youko (demons that look like something out of a Zelda game), and must never look at a full moon. She’s not told why, just told not to. No points for guessing where this is going. Anyway shenanigans happen and Sakura comes into possession of a sword that she uses to kill the Youko, but it doesn’t quite behave itself. Then halfway through the volume, Sakura is betrayed and has to go on the run from Aoba and the Royal court.

Okay, first up I have a lot of problems with the whole setup of this story. Why the hell is Sakura on her own? Her parents are dead, okay. Her brother is dead, fine. But why is she living alone with her attendants? She’s the fiancée of the second in line to the throne! The royal court was involved in all aspects of court life, even back in the Heian period according to my research, and they couldn’t or wouldn’t supervise her? Second, when Aoba and the court officials betray Sakura, it’s because they’ve known for a long time that Sakura was their enemy. Why didn’t they kill Sakura before she came into possession of Chizakura (her misbehaving sword)!?! It doesn’t make any sense and the reason why it doesn’t is that these are actions outside of the control of our leading character. Therefore, such actions shouldn’t have any bearing on how the characters are presented. Yes, I know if Aoba and Co. offed Sakura when she was five then we wouldn’t have much of a plot or manga but still that kind of logic should have been anticipated. Another infuriating thing is the manner and reactions of the character Oumi. Is she a member of Sakura’s household? Is she a royal court-appointed lady in waiting? I don’t bloody know, and that makes what happens with Oumi in relation to Sakura’s betrayal just that much harder to swallow.

On the plus side, I love the majority of the characters. They are so different! Sakura seems like a spoiled brat, but she really is a kind, considerate person. Aside from my problems with Oumi, she’s a nice person who does care about the people she protects. Asagiri is, um, well I don’t quite know how to describe Asagiri. She’s not much bigger than a plushy, she turns up in the folds of all of Sakura’s clothing, and nobody seems to mind that she’s there. Go figure. Byakuya is a servant (?) in Sakura’s house, but she goes all mystic warrior monk on Aoba’s rump. I approve of this action. And then we come to Aoba himself. I really want to like him. He’s got a good heart and he does try to be more considerate than his swarmy older brother Fujimarusaki (the Togu). But he’s such a bloody git, pure and simple! If you love someone and know you’ll never become best egg in the bunch because of it, you sure as hell wouldn’t try and put an arrow into her! I can’t speak of Kohaku, the young ninja girl whose family has served Aoba’s family for generations. She doesn’t show up until the end of the book. But she’s such a vibrant girl, who wants to be the best at what she is trained to be.

The moments when, after killing a Youko, Chizakura disobeys Sakura and spins her round like a top genuinely make me smile. Humour isn’t really something that gets played up here a lot. If it did, I wouldn’t consider reading much more of it. I think the volume’s main weakness is the rapid shift in tone after the betrayal happens to Sakura. Wallop! She’s a hunted animal hiding out from the court’s soldiers. There is a half of a page of foreshadowing and then we get the carpet pulled out from under us. If the next volume doesn’t give either a release from the pressure or some kind—any kind—of a bloody explanation as to why this is happening to Sakura other than she’s suspected of being a monster, I am dropping this book like a stone. The most positive thing I can say about Sakura Hime is it’s got this way of wrapping you into a little macrocosm of royal intrigue, betrayal, and the paths of love. The book has a good cast with an intriguing idea and I hope it gets some legs on it and has a chance to run with it.

Normally, I would speak of the artwork in general cursory terms, talking about the cleanness of the art or if the action and rhythm are good. But this is one of most stylized shoujo series I’ve picked up. Look at the cover. Sakura’s eyes are huge. But they are so detailed and precise. Mangaka Arina Tanemura, whose other works I*O*N, Gentlemen’s Alliance, and Full Moon O Sagashite I have not read yet, fills her pages with speed, vim and clarity. She can do really detailed work and she writes in her author notes that this is the first time she’s tackled a Heian era story, so the costumes and background (at least from my perspective) are quite good. I couldn’t tell you what authentic Heian clothing looks like, so I’ll have to venture and say since nobody’s complained about inaccuracies, it’s probably a good try. That said, the author does say how difficult it was to design a battle costume for Sakura, given the restraints of the period. The character designs range from the energetic Aoba and Sakura, the prim and proper Oumi and Asagiri, the regal, disdainful Fujimarusaki, and the ironed-out Byakuya. Given the period they are in, I wonder how their designs would translate into a modern setting?

All in all, I do like most of Sakura Hime: The Legend of Princess Sakura. It has a solid cast, an engaging premise, and highly stylized artwork. Its crippling point is the abrupt third portion of the volume, which threatens to destroy any forward momentum gained. I am trying to branch out and find more “unsafe” fare. Given this review, am I succeeding? Please write in and let me know. In any event, Tanemura has taken the Japanese fable of the Legend of Princess Kaguya (explained at the back of the book) and given it a good spin. I hope it has lots to go before it has to finish.