Warning: Spoilers follow for the more recent chapters of One Piece, published in Weekly Shounen Jump Alpha. Proceed at your own discretion.

Is there a minimum length for a fight? A character getting knocked out in one panel hardly counts, but how many panels are necessary for something to qualify as a real fight? How many pages are needed? Is a quarter of a chapter the minimum? Half a chapter? Maybe an entire chapter is the bare minimum for something to qualify as a fight. Of course this is mostly semantics, and everyone will have his or her own opinion. But opinions are nothing without evidence, so here is a piece of evidence that a fight can, in fact, be just one chapter long.

What Happened?
After leaving Fishman Island, Luffy and crew make their way to the surface of the New World to find the sea around them aflame. Through the flames, they see a burning island. Luffy picks up a distress call from the island, naming it “Punk Hazard.” The person calling for help says they are being attacked by a Samurai, and strangely complains about how cold it is. Luffy, Usopp, Zoro, and Robin draw the short straw and are chosen as the ones to go and find that person. They make their way onto the island, and after a bit of searching (somehow avoiding being set on fire) they find themselves face-to-face with a Dragon. 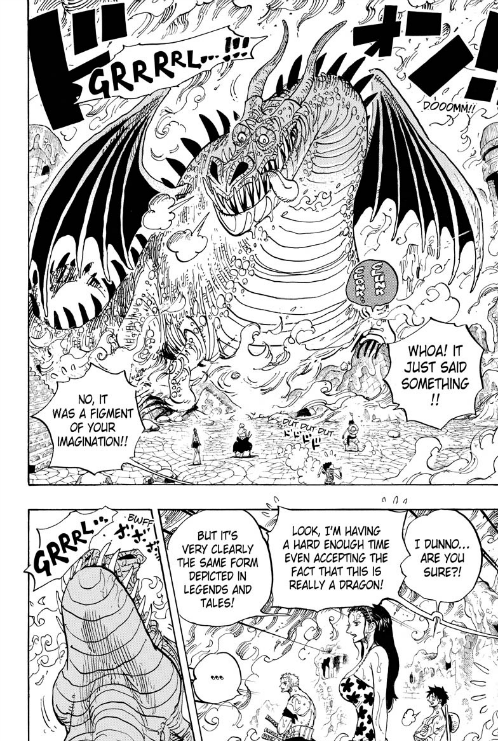 What Happens?
At first, the Dragon is too strong for Luffy and Zoro to fight it. Its scales are too thick to be cut, and too hot to even touch. The dragon’s breath keeps the two fighters at bay, and it seems like the dragon can shrug off any of Luffy’s blows. Even stranger, the dragon seems to be talking!

The dragon takes to the air, and Luffy jumps up to knock it out of the sky so that Zoro can finish it off. While on the dragon, Luffy sees that there are a pair of legs sticking out of the dragon’s back. The dragon tries to bite Luffy, but ends up biting its own wing. As the two fall, Zoro uses one of Usopp’s plants to jump into the air, and finishes off the dragon. 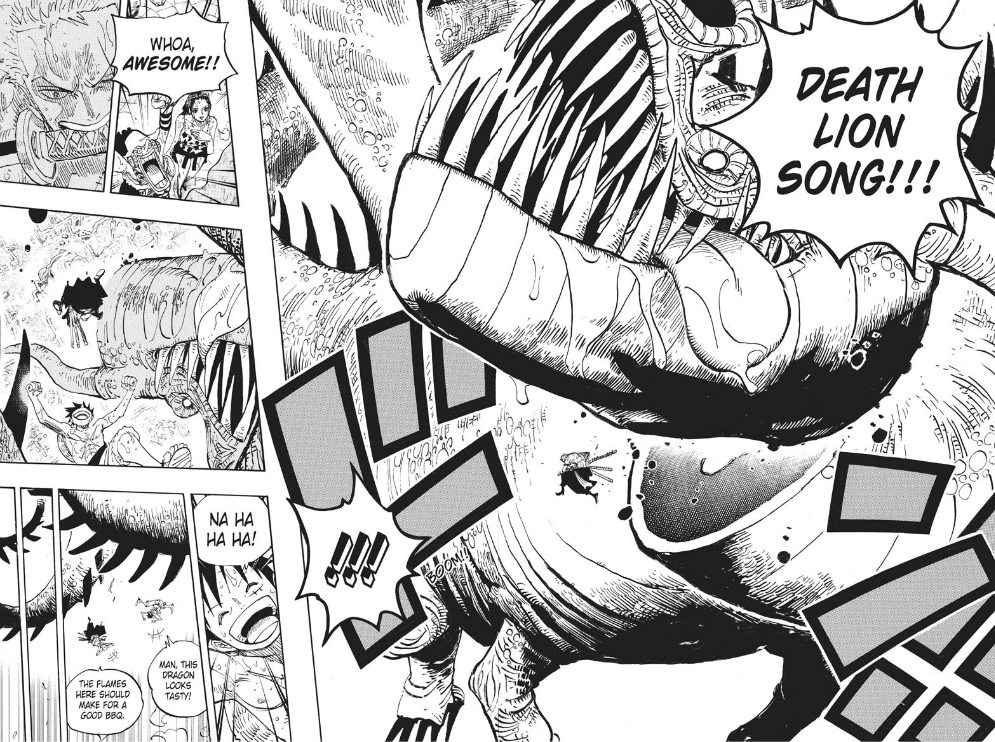 What Does it Mean?
First off, the appearance of an actual dragon in the manga makes the Apis Filler Arc in the anime look absolutely ridiculous now. Those dragons were feathery pussies. This dragon—now this is the real deal. Too bad for it, Luffy and Zoro are beyond overpowered now. 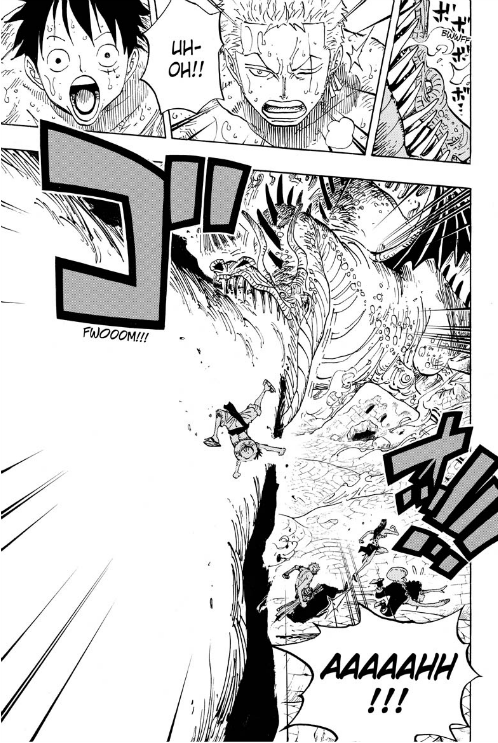 It's still badass, it just had the misfortune of living in a time where Skyrim taught us not to fear dragons.

Out of all the fights in shounen manga, this one stands out for not only its brevity, but for following all the required phases of a shounen fight. Just like Toriko’s battle against the GT robot, the heroes go from being unable to defeat their opponent, to figuring out how to do it and winning—the difference being that rather than changing tactics, it is just a matter of time before one of them lands a solid hit and finishes the dragon off.

The problem is, that though the first half of the fight sets the dragon up as a legitimate threat, the ease with which it is finished off ruins that. Luffy and his crew are in the strange position of essentially getting to experience the beginning of the series all over again. One Piece started off with fights that were no real challenge—that served the purpose of showing off the characters’ strength. As the series progressed, the opponents got harder and harder to beat, and the Strawhats had to struggle more and more to win. But at this point, after the two year training period, there will be fights like this one, where the opponent seems dangerous, but in reality are no match for any of the Strawhats. 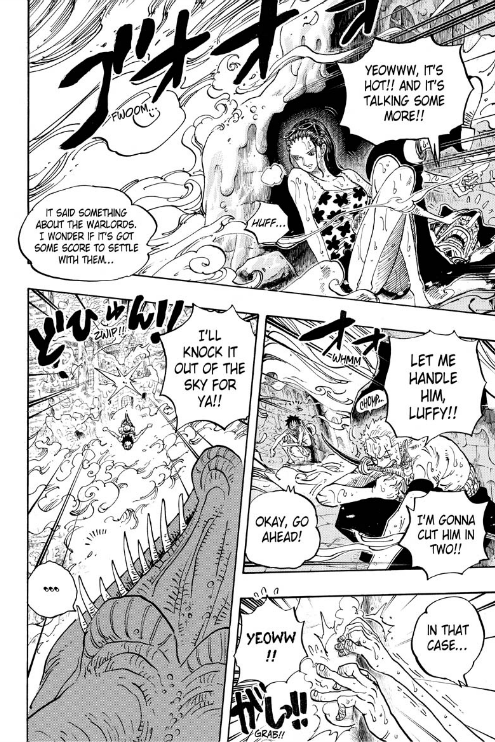 With the exception of the ending being a disappointment, this is still a fun fight to read. Not only is there the novelty of seeing our heroes fight a mythical creature, but it bodes well for the rest of the series. If the creatures found here are so badass, what does that suggest about future villains? 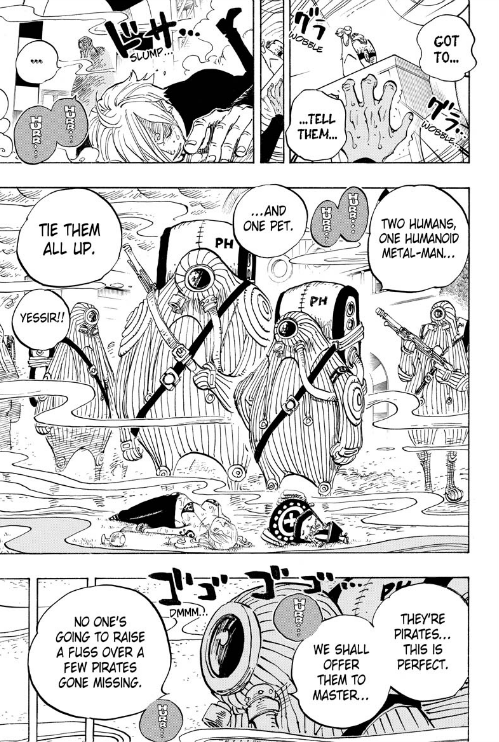 That they're out of shape astronauts?

This fight currently holds the honor of being the shortest fight ever covered in this column. And yet it still works. Oda shows that he knows not only how to be entertaining, but how to fit as much entertainment value as possible into each of his pages. Unlike some creators who waste their pages with white space, Oda fills every panel with as much detail as possible. Though this may come across as cluttered for some, it provides the most content in the least space. And while this is not a column about One Piece in general, it still bears noting that out of all the manga series available weekly, this remains one of the most satisfying reads around.