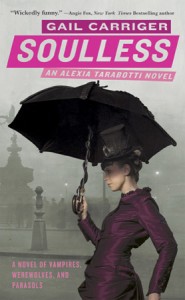 Twenty-five-year-old spinster Alexia Tarabotti has a a few problems. First, she’s a spinster, and being a half-Italian in Victorian England isn’t helping. Second, she’s a preternatural, a human without a soul. And third, a vampire has just died–and it might be her fault! Alexia finds herself in the middle of a mystery involving vampire hives, royalty, and scientists, as rove vampires and lone werewolves are disappearing. In the midst of it all, Lord Maccon, the werewolf pack leader and head of the Bureau of Unnatural Registry, is taking a decided interest in her, and not just because of her preternatural powers. It’s enough to overwhelm any lady–but Alexia is out to prove that she’s much more formidable than that.

Soulless, written by Gail Carriger, is the first novel in the Parasol Protectorate, a paranormal romance/mystery series from Orbit Books. The story takes place in a Victorian England where werewolves, vampires and ghosts are not only real, but are a part of every day society. Last July, Yen Press debuted the manga adaptation of this series in Yen Plus magazine, and has just recently released the first volume in the series, trusting the artist REM (Vampire Kisses) to bring Carrriger’s steam punk supernatural romance to life.

Two pages into the Soulless novel I found myself utterly delighted with the prose. Taking on a distinct Victorian tone, Carriger uses the slight sarcasm you get from a Jane Austen novel to describe a surprise vampire battle. This creates some hilariously fancified lines (“For his part, the vampire seemed to feel that their encounter had improved his ball experience immeasurably.”) and amusing quips (“to put the pudding in the puff”) that plastered a grin on my face from the start. Of course, it pretty quickly feels like Carriger’s laying it on too thick, but luckily she seems to find a happy medium, and the tone evens out.

Soulless is a pretty steamy book, and while like most romances the “amorous activities”, as Alexia calls them, can get out of hand (making out in a jail cell? Really?) the love story never completely overshadows the mystery. The characters themselves are a treat: Alexia is smart and sharp-tongued, and despite the historical and cultural hindrances is a pretty inspiring female character. Lord Maccon is a little more one-dimensional as a gruff werewolf with a soft spot for a certain spinster, but it’s adorable to watch him fumble with human vs. werewolf courting. Members of Alexia’s immediate family fall flat: her sisters are foolish, her step-father is disconnected, and her mother is arrogant (by the end I don’t see why she would stoop to marrying an Italian in the first place). But other side characters liven up the story, with the flamboyant-but-formidable vampire Lord Akeldama, Alexia’s mildly eccentric friend Miss Hisselpenny, and Maccon’s perceptive Beta Professor Lyall, allowing our main pair to vent their thoughts while still showing plenty enough personality to make them interesting on their own. 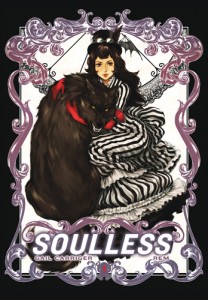 The characters are just as appealing in the manga, with REM’s art style helping to enhance that. Akeldama is still exceptionally flamboyant, with outfits and mannerisms just as fancy and theatrical as I imagined. His exuberant, italicized dialogue is cut down a bit, but his sly smiles and occasional shift to a super-deformed look gives him the energetic feel of a mischievous child. Lord Maccon maintains his roughness in dialogue, though REM gives him a cleaner look than I would have pictured. Still, his care and interest in Miss Tarabotti is both more amusing (an arrow leads his gaze right down Alexia’s cleavage), and more endearing. REM also seems to know enough not to let text boxes overwhelm the art. Because of this, the occasional heavy-handedness of Carriger’s Victorian prose is eliminated, leaving us only with the delightful bits (“I say!” says Alexia as a vampire tries to kill her. “We have not been introduced!”).

The pacing of the comic is generally very even, with a good balance between the supernatural mystery and the romantic plot. On a couple of occasions REM chose to cut scenes out. Much of the deletion has little affect on either the flow or understanding of the story, like when Alexia’s mother and half-sisters return from a shopping trip: while it’s interesting in that it deepens the reasons for Alexia’s dislike of her own family, all this scene does is emphasize her sisters’ frivolousness and her mother’s condescension, things we’ve picked up on well enough. This scene is not missed, but another, when pudgy scientist Mr. MacDougal takes Alexia on a carriage ride, is a little more noticeable. While the book has him taking her around town as he explains his scientific theories, the comic only shows the end of the ride, when he drops Alexia off, and she merely comments that he had some “interesting theories on the soul.” Readers may be able to guess the conversation based on the dinner from a few pages earlier, but the main problem lies in the abruptness of the scene, giving the distinct feeling of something having been hacked out.

Both versions of Soulless had a couple of missteps in pacing that momentarily jarred me out of the story, and the romance scenes didn’t always have the best timing, considering the other tensions going on. But I easily jumped right back into the flow, and the romance is sexy enough to make up for the occasional poor placement. Soulless could have gone the route of many a paranormal romance novel, making the supernatural plot nothing more than a cheap gimmick, but Carriger manages to create not only an enticing romance but also an engrossing mystery and a fleshed out, believable fantasy world. REM’s art style and sense of panel layout gives us an adaptation that’s just as enjoyable, so in this case I say pick your favorite medium – you can’t go wrong either way.