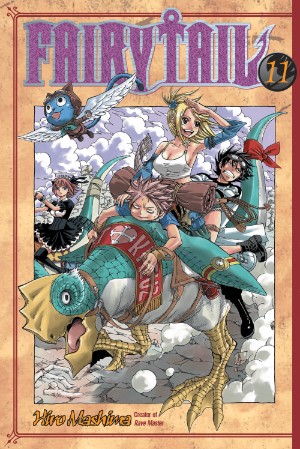 The good thing about writing about fight scenes in shounen manga is that I will never run out of material. The bad thing is that I have too many to chose from. When considering which battle from Fairy Tail to write about, I had to eliminate several possibilities, though chances are they will all see the light of day eventually.

Let’s be honest, women get a raw deal in shounen manga. More often than not, the female lead is one of the least appreciated characters. Her prowess is constantly being compared to that of her male counterpart. And with almost no exceptions, she is found lacking by an incredibly picky fanbase.

I could go into detail about how it’s ridiculous to judge a character’s value based on her combat ability, but that seems a little counter–productive for a column focusing on nothing but fights. Instead, let us talk about a series that puts the women on the same playing field as the men, and gives them a fair shot at being just as formidable as the boys.

Erza Scarlet is one of the rare female characters who is consistently stronger than the male lead. But she is not the female lead—that falls on Lucy Heartphilia instead. At first glance, Lucy comes across as the basic female lead in a shounen manga. More often than not, she needs saving, and she’s consistently weaker than Natsu, the male lead. The difference between her and far too many other female shounen leads is that she consistently gets at least one fight per arc in the latter parts of the manga.

Compared to characters like Naruto‘s Sakura (who’s gotten exactly one fight over the course of years of publication), Lucy may not be the most powerful character, and her fighting style isn’t as direct as shounen audiences like. But at least she gets fights, and she usually wins them. On the other hand, she also tends to lose her clothes during the fight. You win some, you lose some. 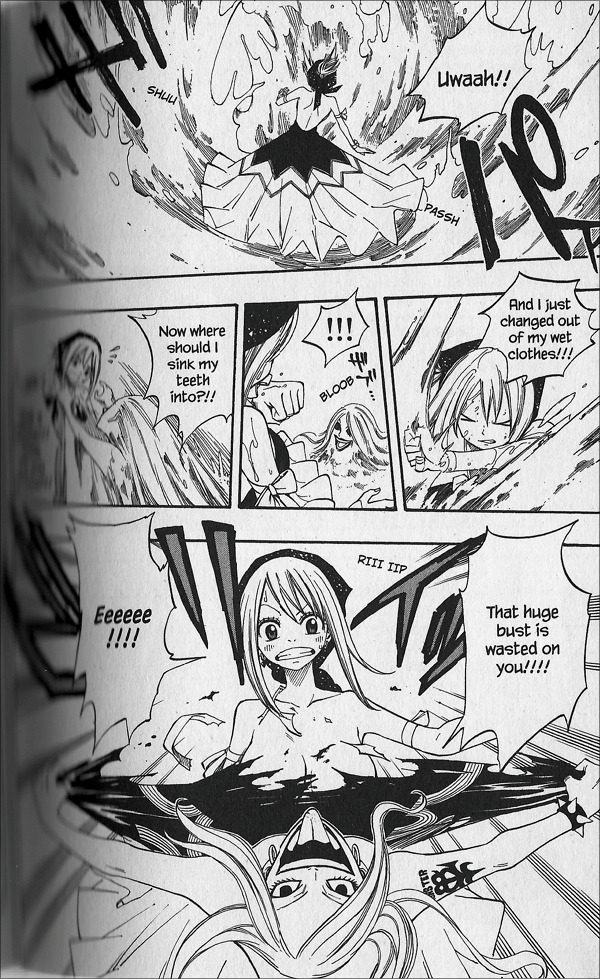 What Happened?
Erza, in a rare case of damsel in distress, is kidnapped by former friends of hers. They take her to the Tower of Heaven, where she and they had been child slaves years ago. There, Erza discovers that an old friend of hers, Jellal, has almost finished the Tower of Heaven, and intends to use the R-System within it to resurrect the dark wizard Zeref. 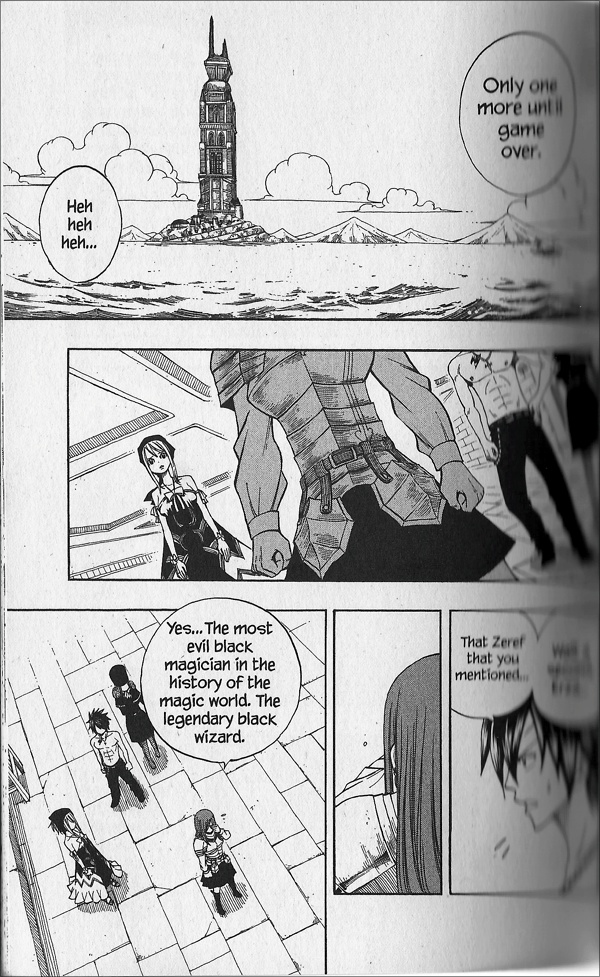 Natsu, Gray, Lucy, and Juvia make their way to the tower and infiltrate it to save Erza. After meeting up with Erza, who had escaped captivity on her own—damsel in distress did not agree with her—they all split up to take down Jellal. Lucy and Juvia go together, and are confronted by Vidaldus Taka, a punk rocker with the ability to control his hair and make women his slaves. 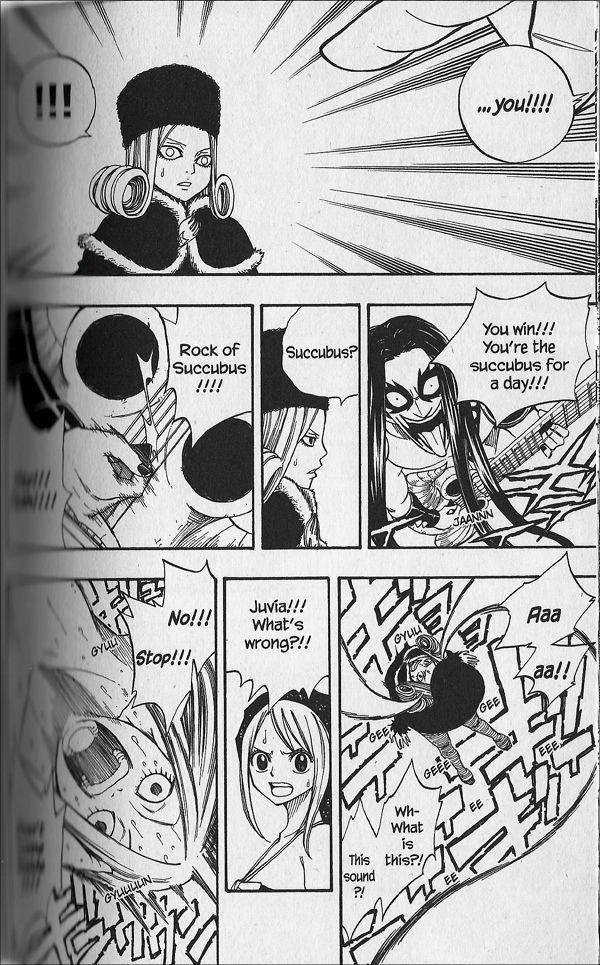 What Happens?
Vidaldus takes control of Juvia, and turns her against Lucy. Juvia beats on Lucy, but her real feelings manage to make their way through. Lucy then realizes she can use the water that makes up Juvia’s body to summon her strongest Celestial Spirit, Aquarius. Aquarius floods the room with water, and Lucy and Juvia combine their magic power into a unison raid to overpower Vidaldus. 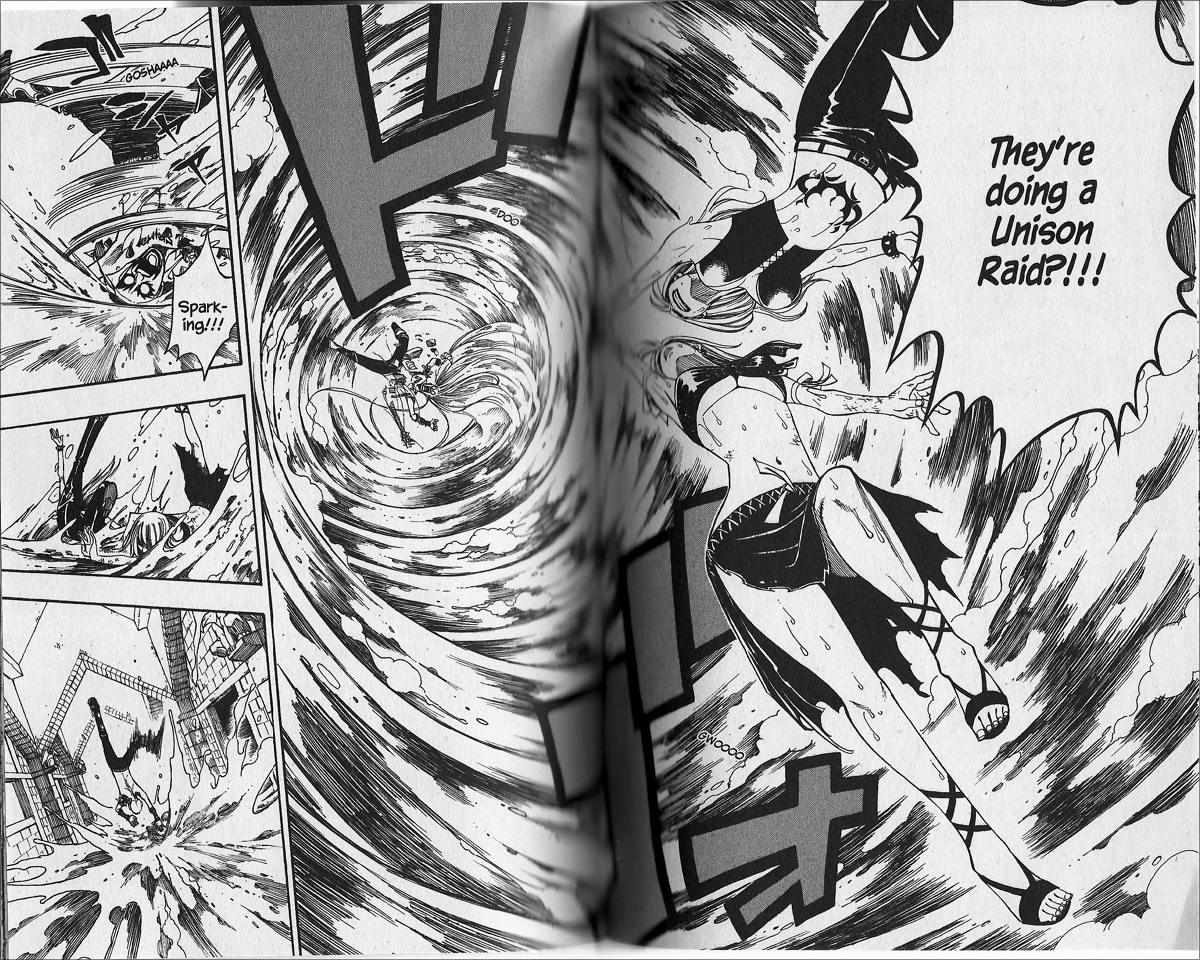 What Does it Mean?
Last week’s column brought up the issue of using established abilities vs sudden power-ups in the middle of battle. This is an example of the latter. Lucy and Juvia somehow manage to combine their magic powers, an ability that is never foreshadowed, nor is it ever explained or brought up again. 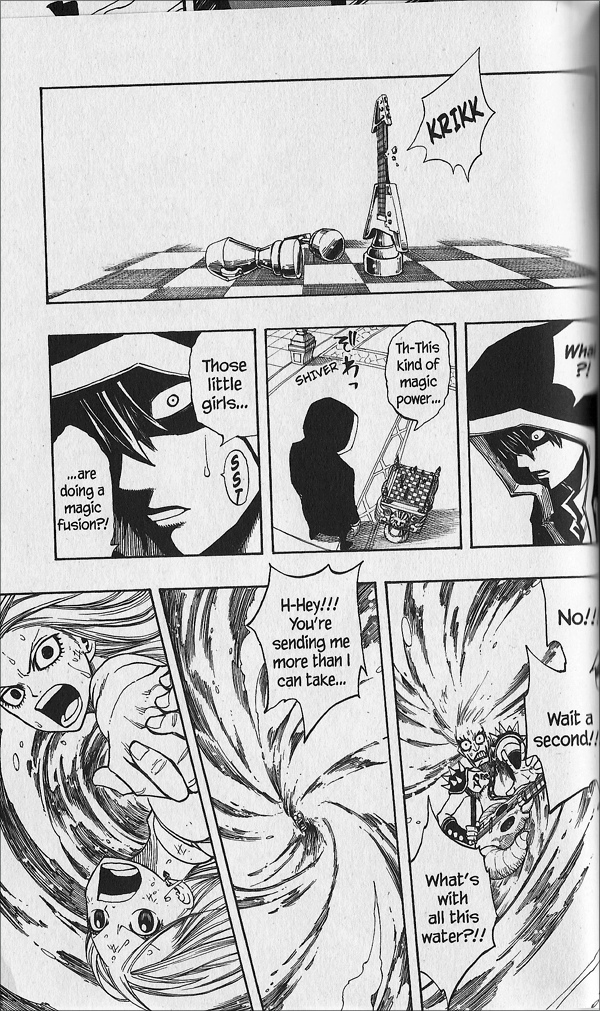 Clearly, you are meant to know exactly what this prior unexplained phenomenon is!

For all of his ability to create entertaining manga, Mashima is bad at ending things. Whether it be fights, or an entire story. The reliance on a deus ex machina (sort of) power-up is lazy writing, especially when the proper groundwork hasn’t been laid. The difference between a satisfying climax and a deus ex machina is always in the preparation that has been done prior to the climax. 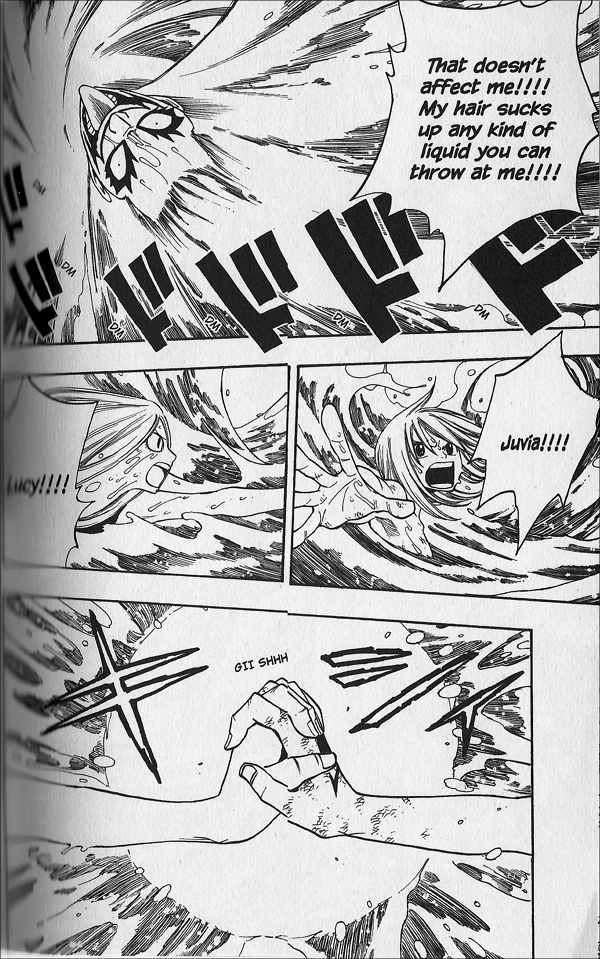 That being said, considering this is the eleventh volume of the series, it’s actually only Lucy’s second proper fight. Fairy Tail does an interesting thing with her character. She starts off as being the damsel in distress more than once, but as the series progresses she becomes more involved in fights and even starts to win them on her own. More or less. She never really fights on her own, much the way a pokemon trainer never really fights his own battles. 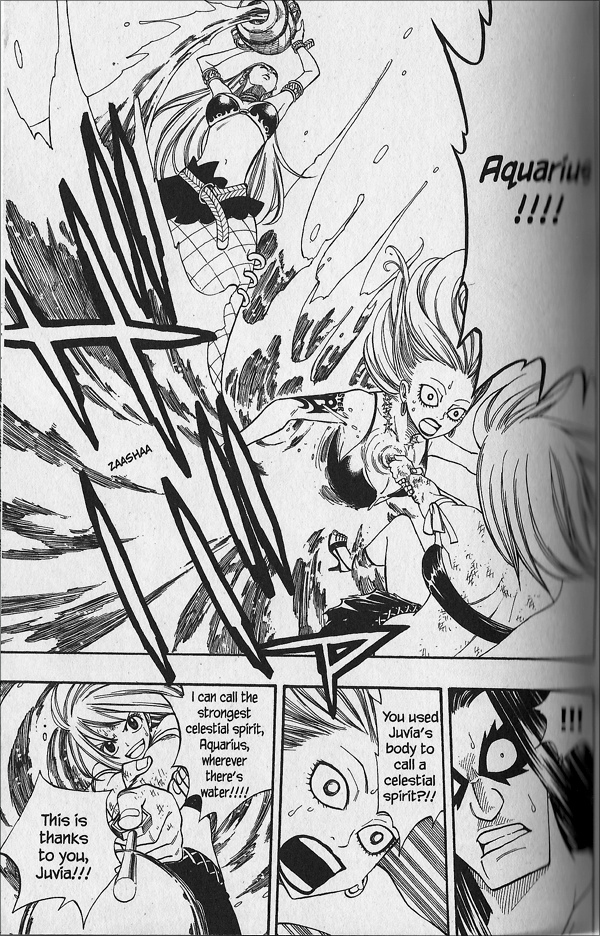 If Natsu, Gray, and Erza get the big cool moments, with epic powers clashing against mighty foes, Lucy gets the small cool moments—such as the moment she realizes she can summon Aquarius using Juvia’s unique body structure&mdashwhich makes the random power up at the end of this fight all the more a shame. Lucy is one of the characters who fights differently from the average shounen fighter. She has to use more strategy and take advantage of her surroundings and the unique abilities her Celestial Spirits give her. Generally, her fights are more interesting than most of the other characters,’ which isn’t too shabby at all for a member of a demographic too often neglected in shounen manga. 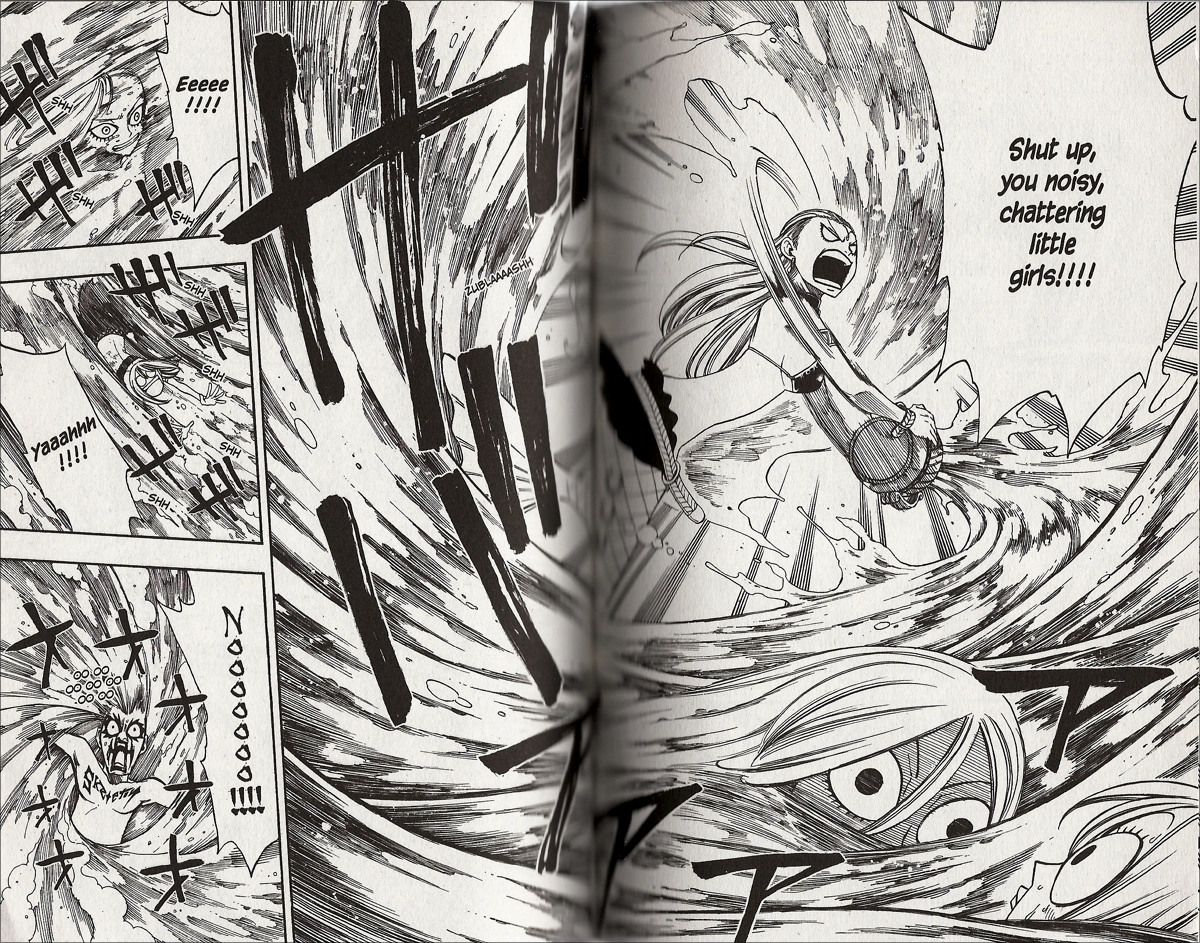 How about you? Is this shoddy writing at its worst, or an interesting start to a well-rounded character development? Best comment wins cake. Also, if you have any requests for future entries to this column, feel free to submit them here. If I’ve already read the manga, then the chances of it getting covered are much higher. Also, be sure to check out my blog at Burning Lizard Studios.