If you are a geek, and find yourself in Taipei, know this: you must visit the Huashan-Bade-Guanghua geek complex. They can supply any geek, whether food geek (there is a farmer’s market), korean drama geek (lots of korean drama DVDs) and even the jade geek (yep, there’s a jade market too). 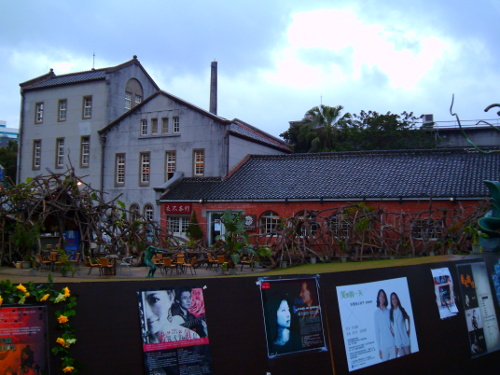 Once upon a time, Huashan was a factory. As Taipei de-industrialises, authorities try to repurpose the leftover structures, and Huashan is one of their more successful efforts. It has galleries, trendy cafes/eateries, a yoga center, and hosts various artsy/indy events. Futhermore, it’s a popular location for wedding photos. When I talk to young people about what places in Taipei they recommend visiting, Huashan is one of the places they mention the most often. However, there is not much in the way of comic books around Huashan. 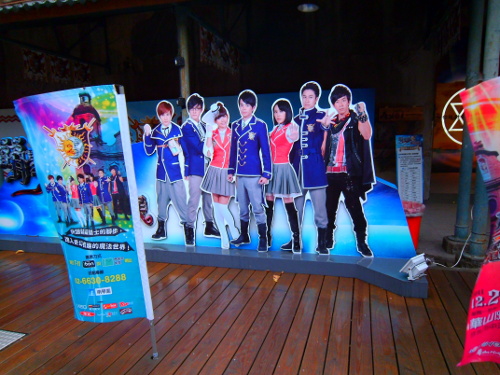 Here is a temporary exhibit at Huashan dedicated to The M Riders, a Taiwanese fantasy TV series. I don’t know much about it, though based on what little I’ve seen, it looks like it has been heavily influenced by Harry Potter. 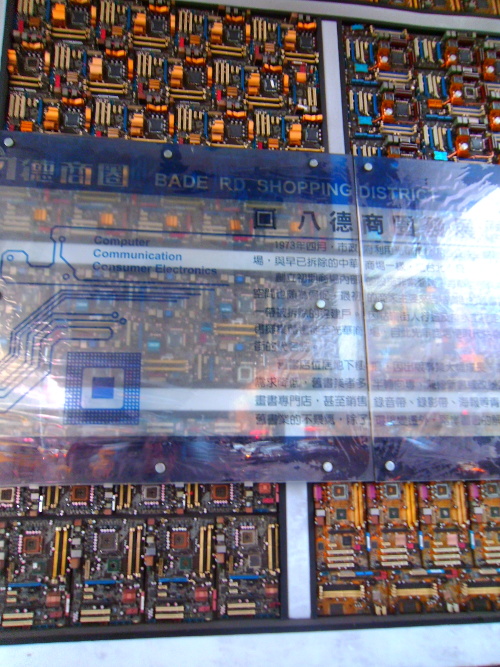 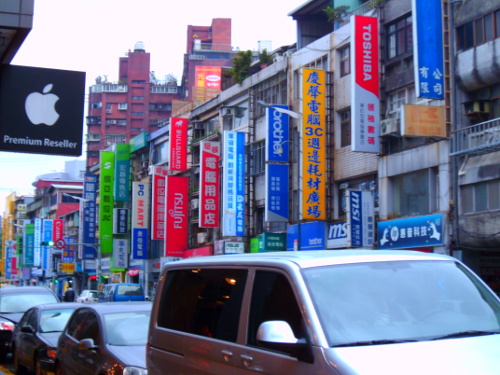 As you can see by the street signs, this section of Bade Rd. is full of technology stores. 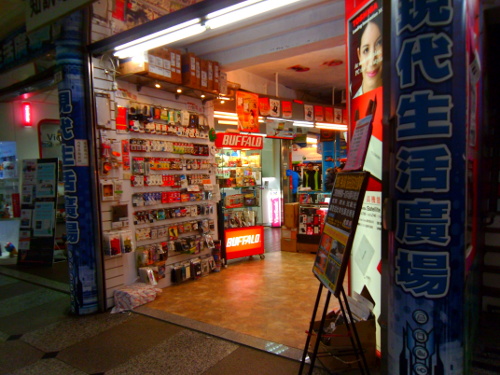 This is a typical store-front. 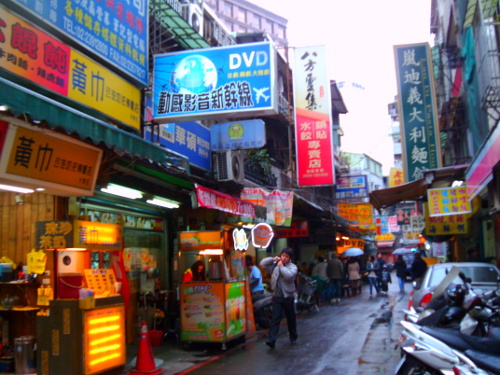 Here, in the alleys, tech stores mix with vendors of standard Taiwanese street fare, in case you get hungry while browsing through wares (and it’s the wrong day of the week for the farmer’s market). 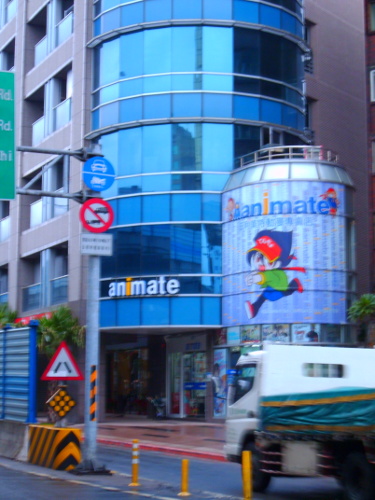 Of course, all of the geeks converging on Bade Rd. to get their gadgets also need something to read. Animate, one of Taiwan’s largest comic book stores, is right here to serve them. 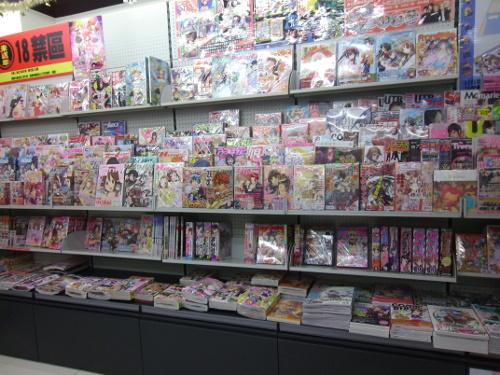 Here is the magazine section. 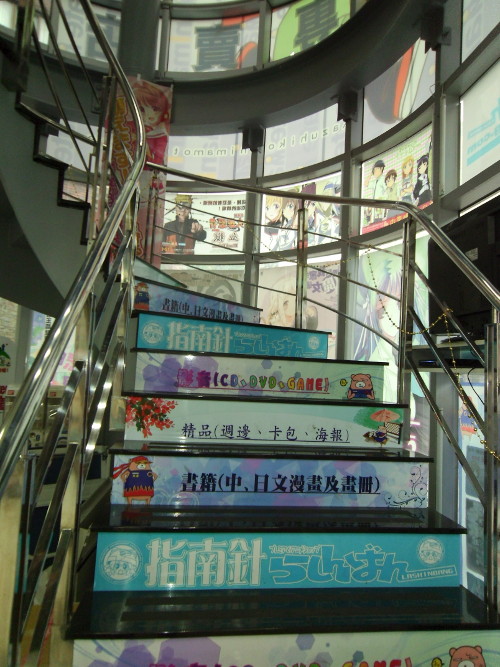 Here is the staircase.

Unfortunately, they did not want me to take pictures of the second floor (where most of the store is). However, they have a huge selection of (new) manga of all kinds, as well as lots of light novels, and manhwa, and the type of manhua which is styled after Japanese manga. Alas, I have never seen any of the types of manhua which stray further from the Japanese style at Animate. But that’s just the front part of the store. In the back part of the store, they sell lots of anime/manga themed merchandise. And in the very, very back is the “18 and older” section, naturally. 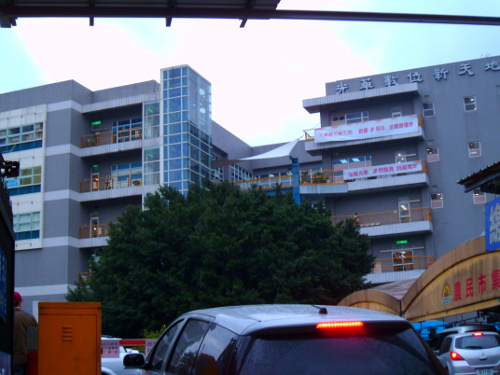 But now it’s time to head to … GUANGHUA DIGITAL PLAZA! 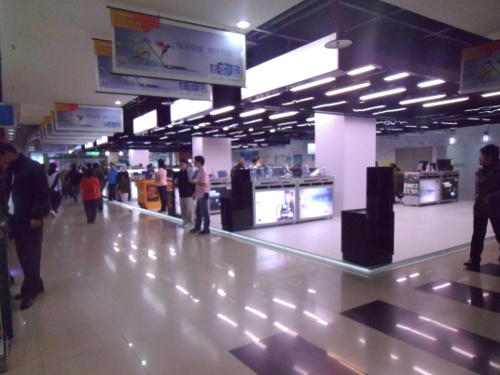 Here’s a picture of the ground floor of Guanghua Digital Plaza. Though the ground floor has some eateries (which I do not care about) … the real business is selling the big gadgets. Like computers. 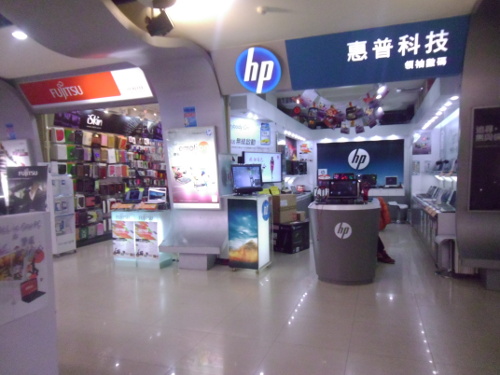 This is the stall where I bought the computer I am using to write this post.

One of the features of shopping at Guanghua Digital Plaza is the haggling. It is easier to haggle at Guanghua Digital Plaza than at the Nova Arcade on Chongqing road (the other major spot in Taipei to buy electronic gadgets). It is often said that you should never accept the list price for anything (at least for the tech items). I am not good at haggling, so I can’t give advice, but you should definitely try to get as good a deal as you can. 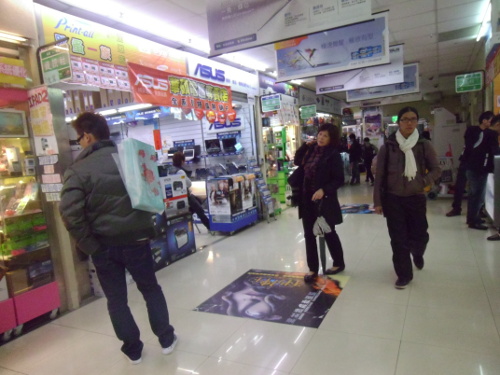 Let’s go up to the second and third floors – where all the comic books are! 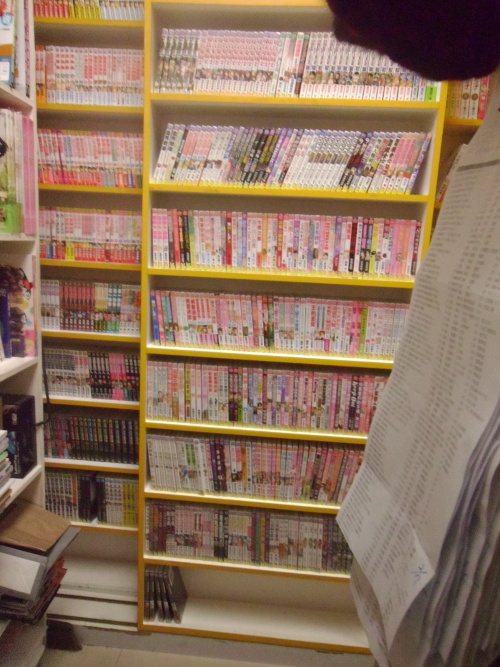 This is a pretty typical set up for comic book stores / rental shops throughout Taiwan – tall, shifting shelves to pack in as many comics as possible. 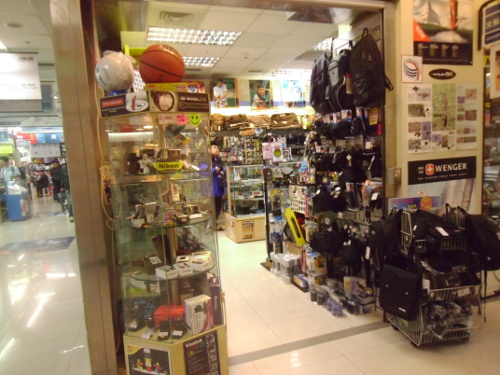 Here’s an outdoor-gear store. I told you this area catered to geeks of all kinds. 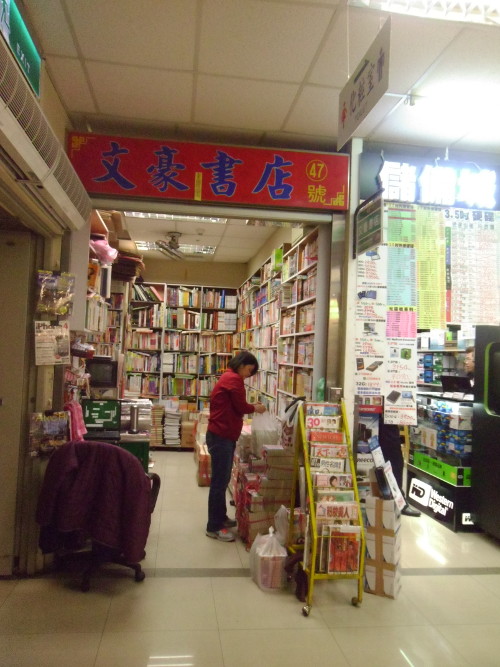 Now here is a little book store that I love. Though it’s small, they have a good selection of comic books: 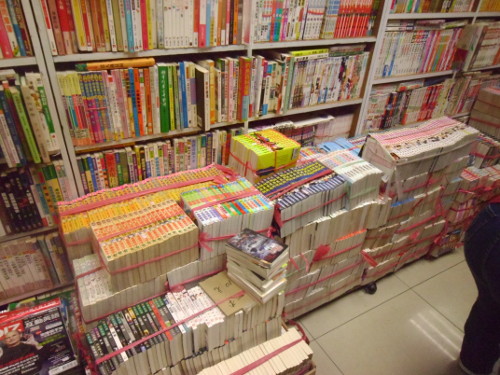 Of course, with all of those comics stacked up on each other, browsing is a bit challenging – how can you know what’s buried under there? That’s why there is a list of all series currently in stock; if you indicate interest in a series, the store keeper will pull it out for you. 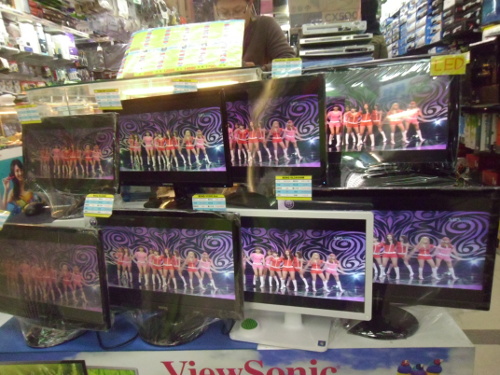 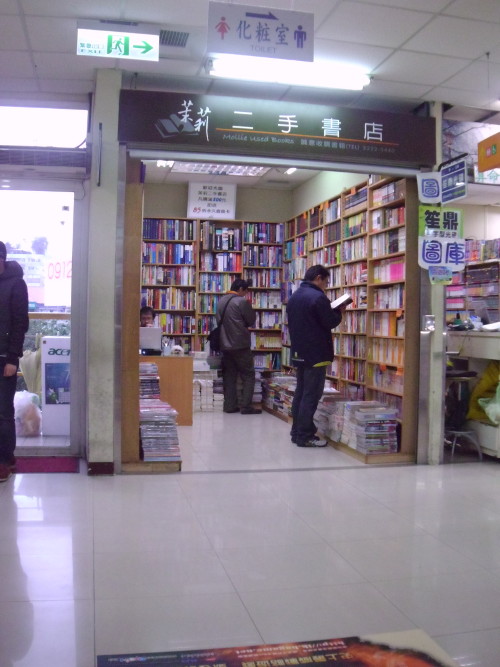 And here’s Mollie’s outpost at Guanghua Digital Plaza. Mollie’s Used Bookstore is one of the local used bookstore chains. While this Mollie’s merely has a small selection of comics, it’s always worth a look. 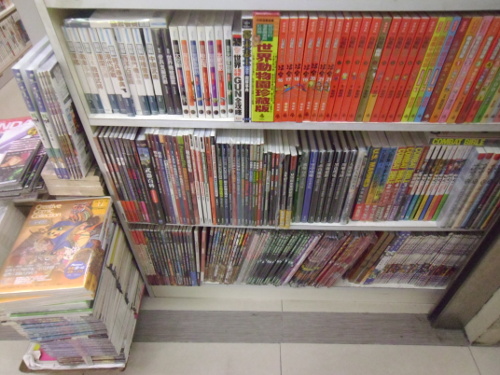 If you were disappointed that Animate does not sell manhua which veers from the Japanese style, this store has a nice selection of such manhua. 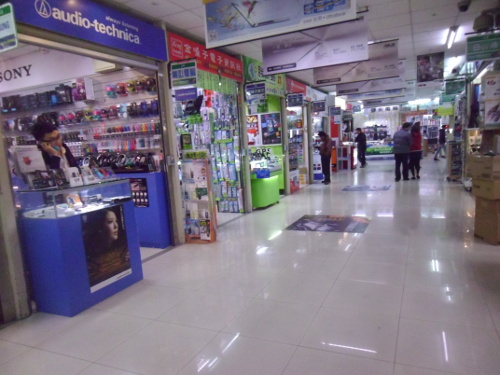 Somewhere on this floor is the store where I bought the camera I’m using to take all these pictures … but I can’t seem to find it. 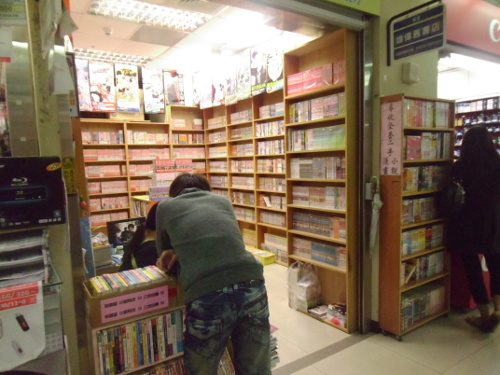 Here’s another great comic books store. This place just sells used comics – specifically, it just sells bundled used comic books. It’s great if you want the full run of a semi-popular-thru-somewhat-obscure series without putting your wallet through too much pain. 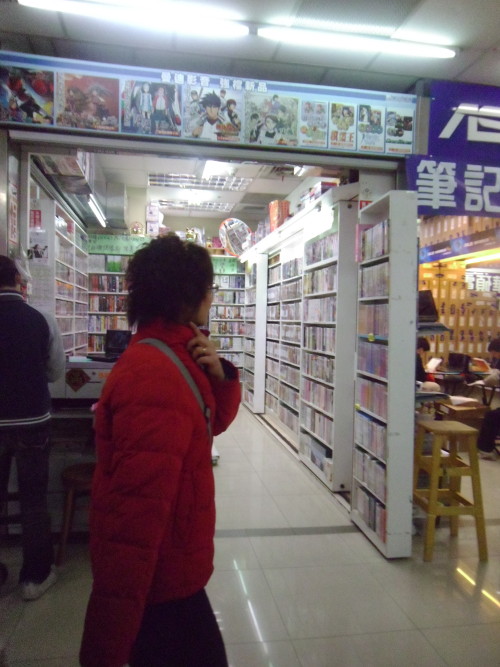 And here’s a video store. There are a number of these throughout the second and third floor. They sell Hollywood fare, Hong Kong fare, Chinese fare, Japanese live-action fare, anime, lots and lots of Korean dramas, and local idol dramas. Notice that there is a sign on top for the Emma anime. 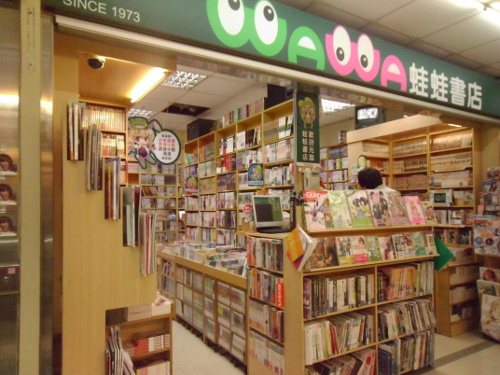 And here’s Wawa, which has by far the best selection of new comic books in all of Guanghua Digital Plaza. They even have some new comics which I have not seen at Animate. 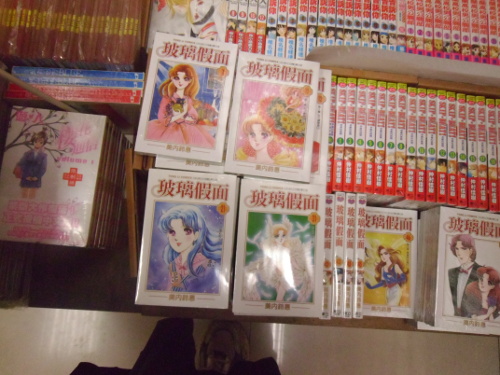 For example, they have Every Single Volume Of Glass Mask. New. It’s not hard to find a used set of Glass Mask, but having new copies of the entire run in stock? That’s impressive. 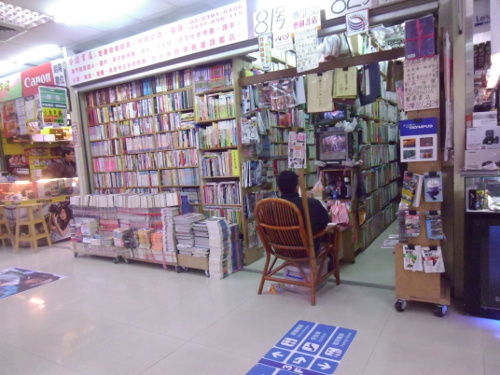 And here’s another little store that I love. 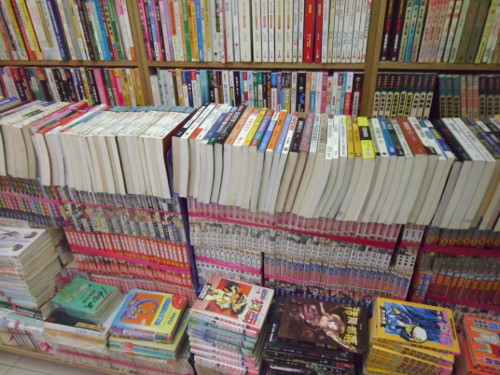 Again, the comics are stacked up right out front, though there are also many comics inside too (I never understood how this store is organized, and that’s okay – it make is more like a treasure hunt). 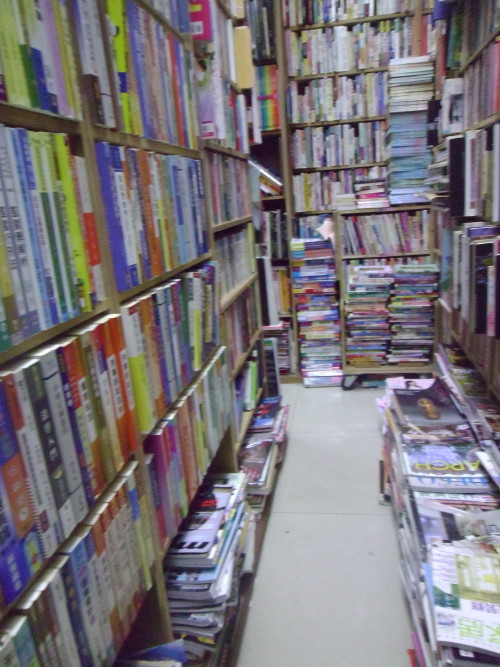 And here’s the interior. Look at how books are spilling out of every book and cranny. While it’s not so good for the books, I love this kind of used bookstore. It feels so much warmer and cozy than bookstores where everything is neatly and coldly laid out.

So that’s Huashan-Bade-Guanghua. I admit that it’s quite commercial (well, Huashan Cultural Park is less so), but buying, selling, and trading what you love is quite exciting. Every time I visit, I think I already know everything that’s there – yet I always manage to discover something new. And if you visit yourself, I’m sure you’ll disover something new yourself.

Sara K. has previously written Why You Should Read Evyione and a review of Mary Stayed Out All Night for Manga Bookshelf. She now has her own blog, The Notes Which Do Not Fit, though you won’t find much about comic books or Asian culture over there. She currently lives in Taoyuan County, Taiwan.