What’s that, you say? What am I doing looking at Bakuman? It’s not even a battle manga. Don’t I know the title of my own column? Well, allow me to explain. I’ve mentioned before that I am interested in looking at non-conventional fight scenes and battles. Not all conflict (or even fights) needs to be physical. Sometimes they can be battles of ideals, or of ideas. They can be mental mindgames, or cleverly constructed traps. One could even say that any form of conflict resolution is a battle.

While I will continue to focus on battles involving actual physical confrontation, every once in a while I plan to slip in a commentary on the more unconventional battles that are found in manga. With this entry at least I hope to show that a manga does not need punching to be shounen. Series like Bakuman are just as shounen, possibly even more so, than series involving a great deal of fighting. 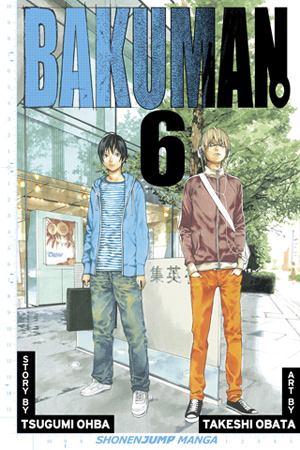 What Happened?
After overworking himself, Mashiro collapses on the floor of his studio. His assistants find him, and he is admitted to the hospital. While Mashiro insists that he can keep working while in the hospital, his friends try to get him to stop until he recovers. But one by one he convinces them all, even Azuki, that he needs to keep drawing, no matter what. Once he finally has everyone on his side, and is finishing up the pages for the next chapter, the Editor in Chief says that their series will be put on hiatus until Mashiro and Takagi graduate from high school. 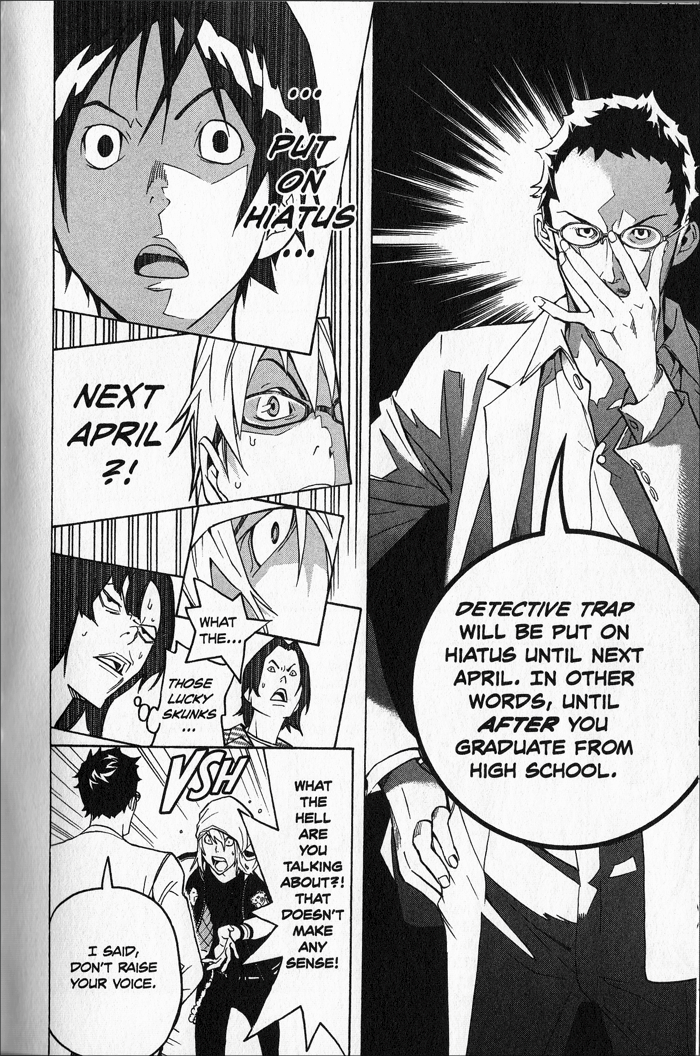 What Happens?
Everyone, including several of the editors, and all of Mashiro and Takagi’s manga artist friends, disagree with the Editor in Chief’s decision to put the series on hold, despite the fact that the decision is made with Mashiro’s well-being mind. Fukuda, and the rest of Team Fukuda, decide that they will protest the Editor in Chief’s decision by boycotting the magazine. They meet with their editors, and tell them that they fully intend to withhold their series from the magazine until the decision to put Muto Ashirogi on hiatus is reversed. 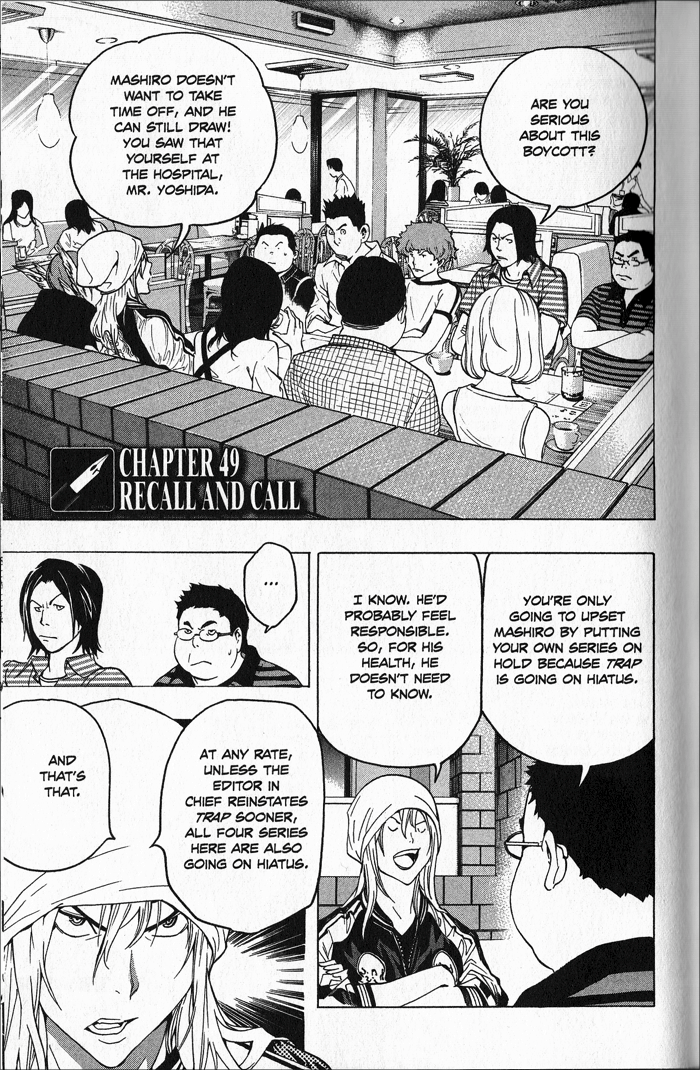 The Editor in Chief remains firm in his decision, and despite the next issue being printed without any of Team Fukuda’s manga, he refuses to change his mind. Miura tries to resolve the issue by getting Mashiro and Takagi to accept a hiatus until Mashiro is discharged from the hospital. He manages to do this, and Mashiro convinces Fukuda and Nizuma to put an end to the boycott. But even after getting the boycott resolved, the Editor in Chief refuses to change his mind. It is not until Mashiro leaves the hospital, and he and Takagi and Miura present the Editor in Chief with all the chapters they created while Mashiro was hospitalized, that the Editor in Chief finally relents and allows Trap to continue serialization in the next issue. 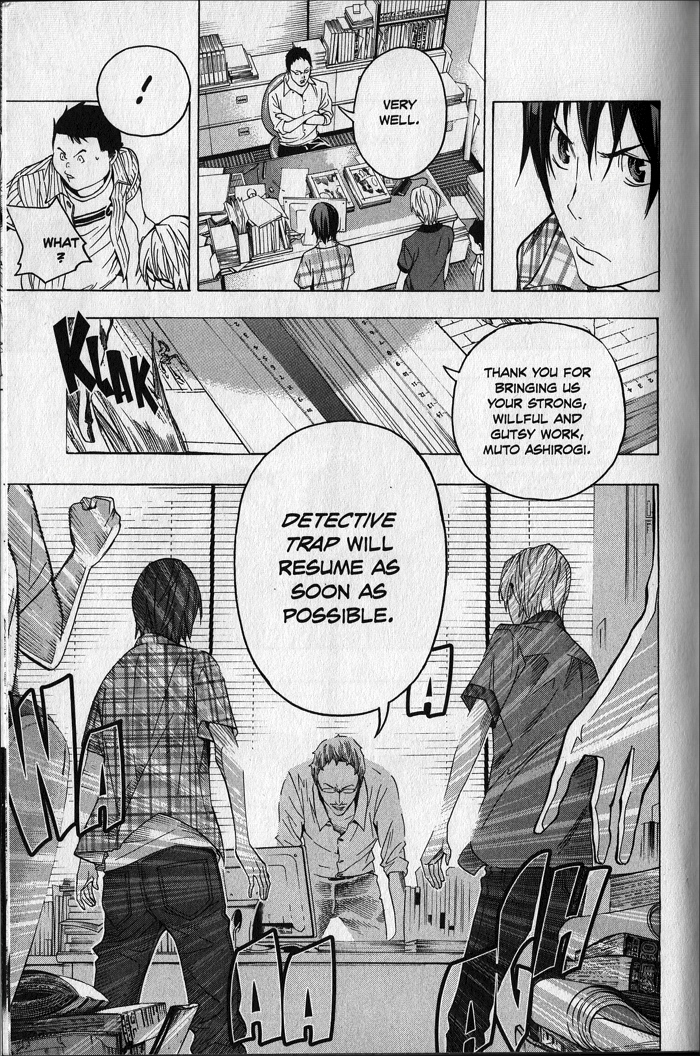 What Does it Mean?
Battles do not have to be physical to be battles. Sometimes they can be a mental game between two opponents, such as are found in Death Note. At their most basic, battles are a clash between opposing ideals. In every good battle, the protagonist and the antagonist’s ideals clash, and the battle does not end until one set of ideals has been proven superior. Generally these confrontations are simplified down to the stronger fighter having the correct ideals. 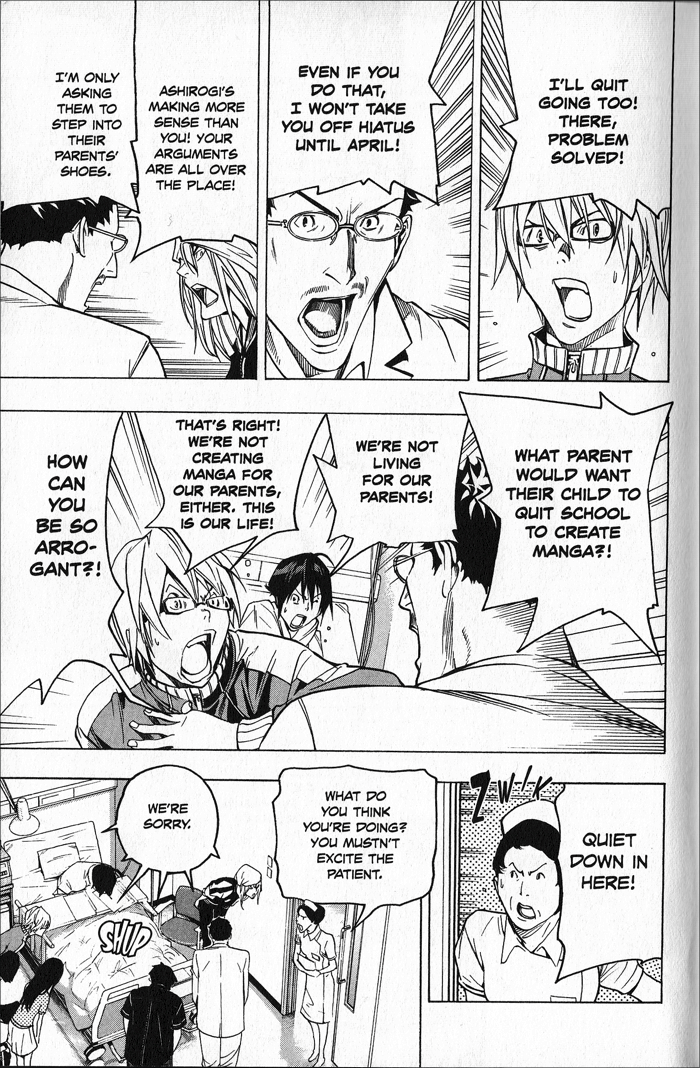 Even better, is when there is no clear right or wrong. Oftentimes the ideals are simplified down to clear black and white, but in the case of Bakuman, a lot of the driving force of the conflict is that both sides have good arguments. In a way, the Editor in Chief’s lone stand against the rest of the cast puts him in quite a heroic role, especially when considering his motivation is to protect Mashiro from sharing his uncle’s fate. 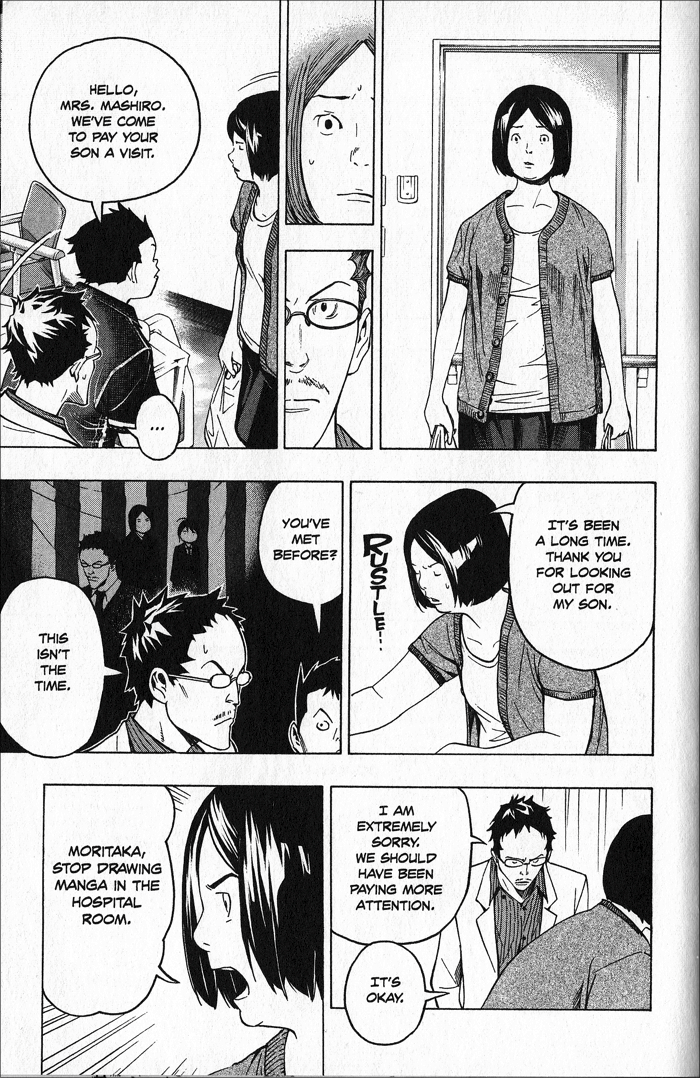 In a series mostly based in the real world, like Bakuman, fantastic physical confrontations are not possible. And while no blows are traded, two ideals are still pitted against each other. The Editor-in-Chief is convinced that if Mashiro keeps working, he will end up like his Uncle, and wants to protect him from this fate. While Mashiro and the rest of the cast believe in the youthful ideals of always working hard, no matter what puts itself in your path. 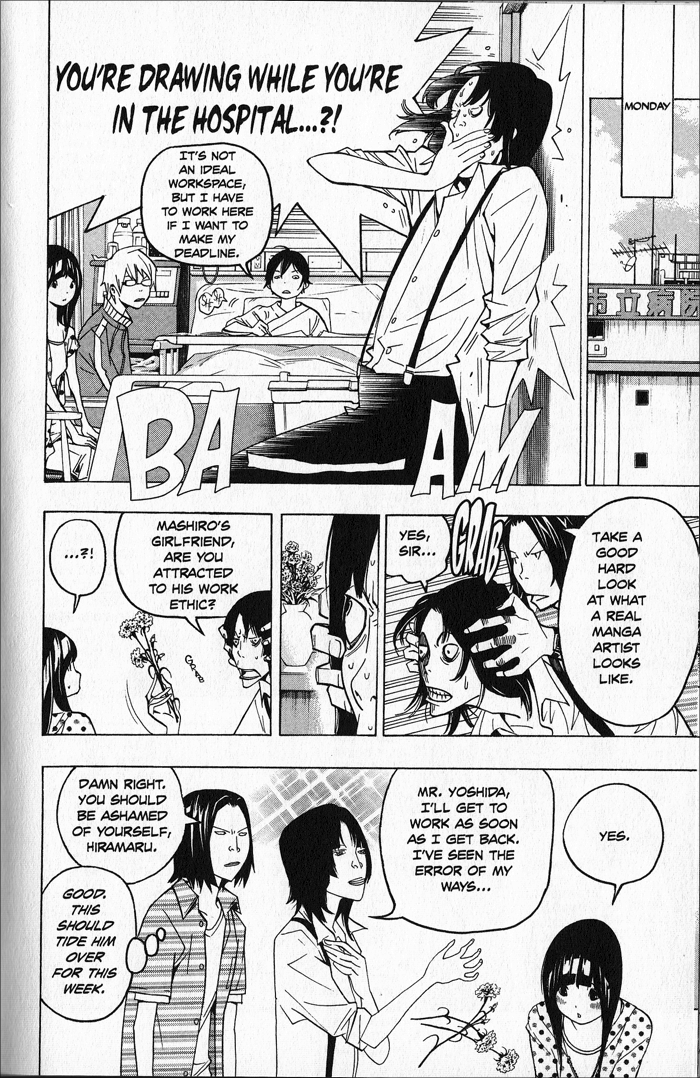 The battle is fought with sheer willpower. The same willpower that brings other shounen heroes back to their feet, is what keeps Mashiro drawing, despite his body rebelling against him. It is the same willpower that allows his friends to risk their careers to fight what they perceive as an unjust decision. And in the end, it is that exact same willpower that convinces the Editor-in-Chief to reinstate the series before he had intended to. 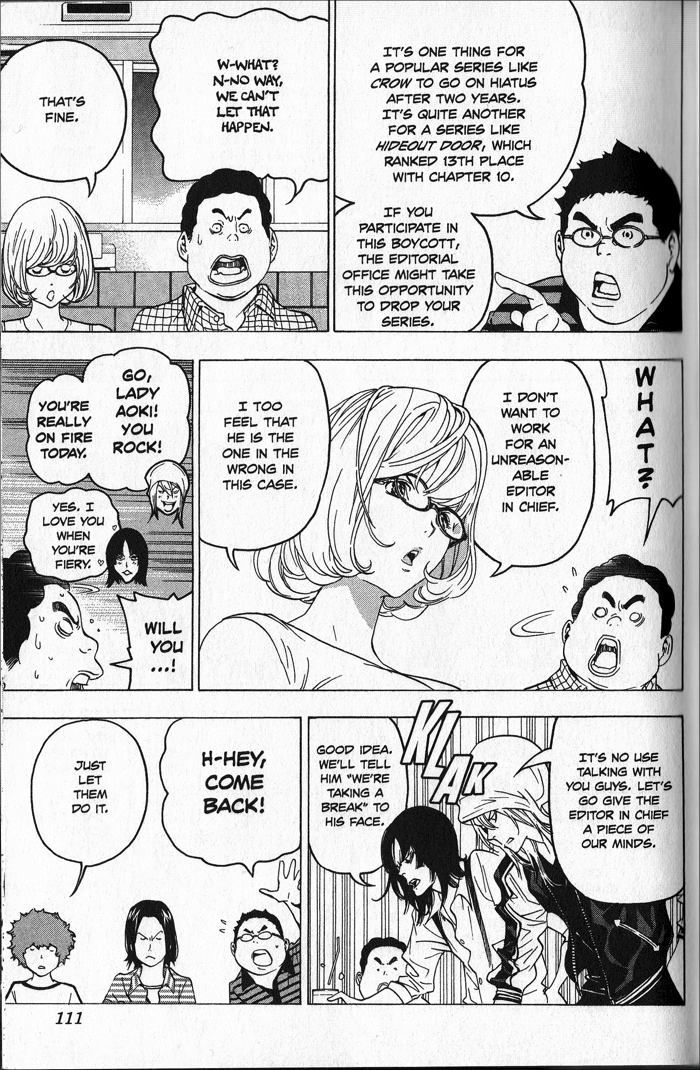 By digging deep, and finding examples of battles in even a series like Bakuman we find that battles are the core of every good narrative. Whether actual battles are fought or not, a story relies on the clash of ideals that happens when two opposing sides face each other. And it is the resolution of this conflict that gives every story worth reading its bite. 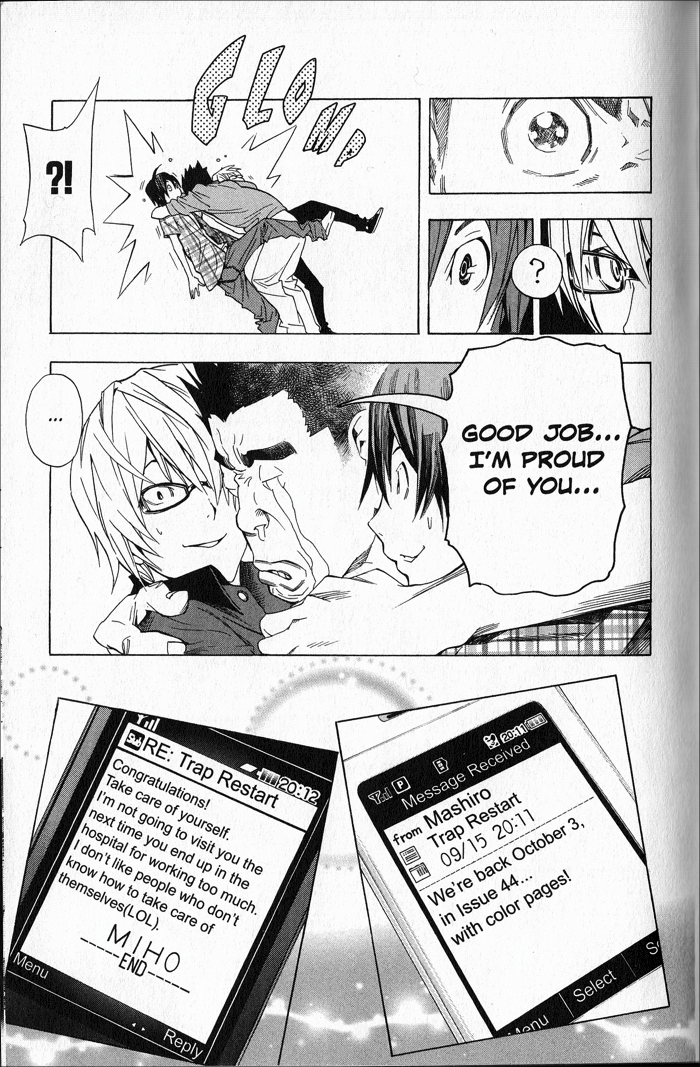 In a way, the series itself manages to focus not only on how manga is created, but it also uses its story as a way to show how to create good manga. Mashiro’s battle against the Editor-in-Chief has all the hallmarks of a good battle scene, and everything else about the manga sets up the ideas used to create good shounen manga. From Mashiro and Takagi’s incredible drive, to their rivalry against Nizuma (which only really started because they decided to make him their rival) which drives them on to become Number One. Not only are meta-battles used in all forms of storytelling, but Bakuman is a rare case in that the entire point of the series is to portray shounen manga in a different setting than normal.