Seinen battle manga can be a glorious thing. Once the restrictions of a younger audience are removed, seinen artists can show the brutal reality of battle. Limbs go flying, and blood splatters cover entire pages. That is not to say that shounen manga is sparkly clean. Despite being aimed at younger readers, shounen battle manga can get fairly graphic. However, the truly graphic scenes are saved for moments where they will have the most impact. With seinen manga there is a risk of over-exposure. Once the reader has gotten used to the limbs flying all over the place, the moment it’s meant to matter doesn’t make have the desired impact. 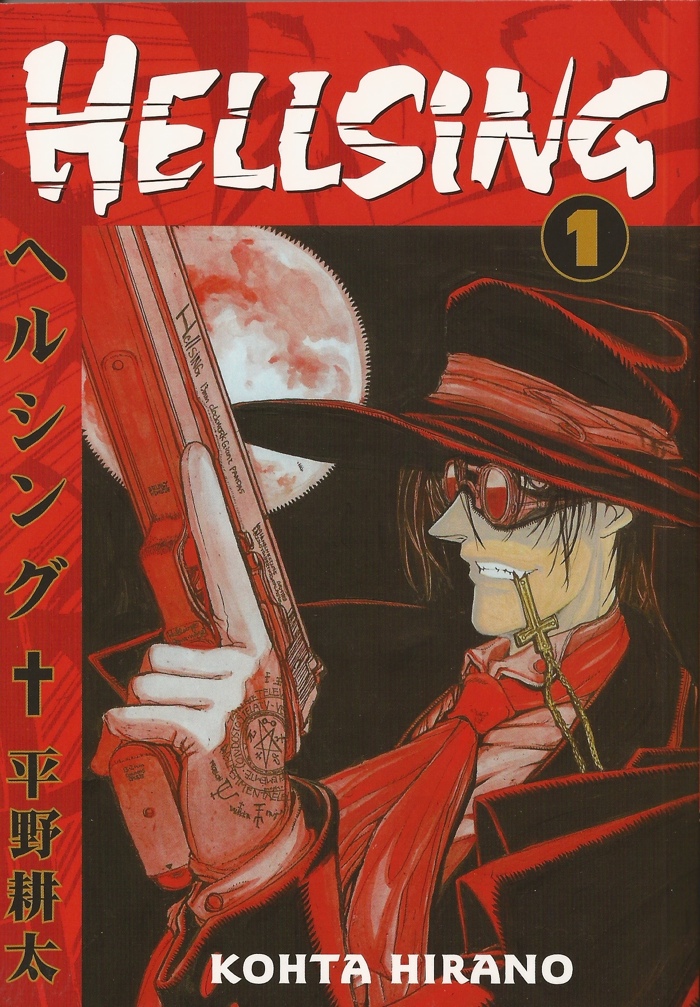 Consider, would Shanks losing his arm in the first chapter of One Piece have the same effect if it had been preceded by twenty pages worth of limb removal? However, where seinen excels is in trading in gravitas with pure, unfettered gore-mageddon. Sometimes you just want to see limbs removed and pages splashed with blood. But only if it’s in black and white—one wouldn’t want to aggravate one’s sensitive temperament.

What Happened?
While the Catholic Church is content to leave Hellsing to deal with the unusual numbers of vampires in England, an incident in Ireland prompts them to send their premier vampire hunter, Father Alexander Anderson. He confronts Alucard and Seras, who have been wiping out a ghoul infestation. He attacks Seras, and while Integra postulates about Anderson’s monster hunting chops, Alucard and the good Father face off, trading quips while they wait for the first strike. 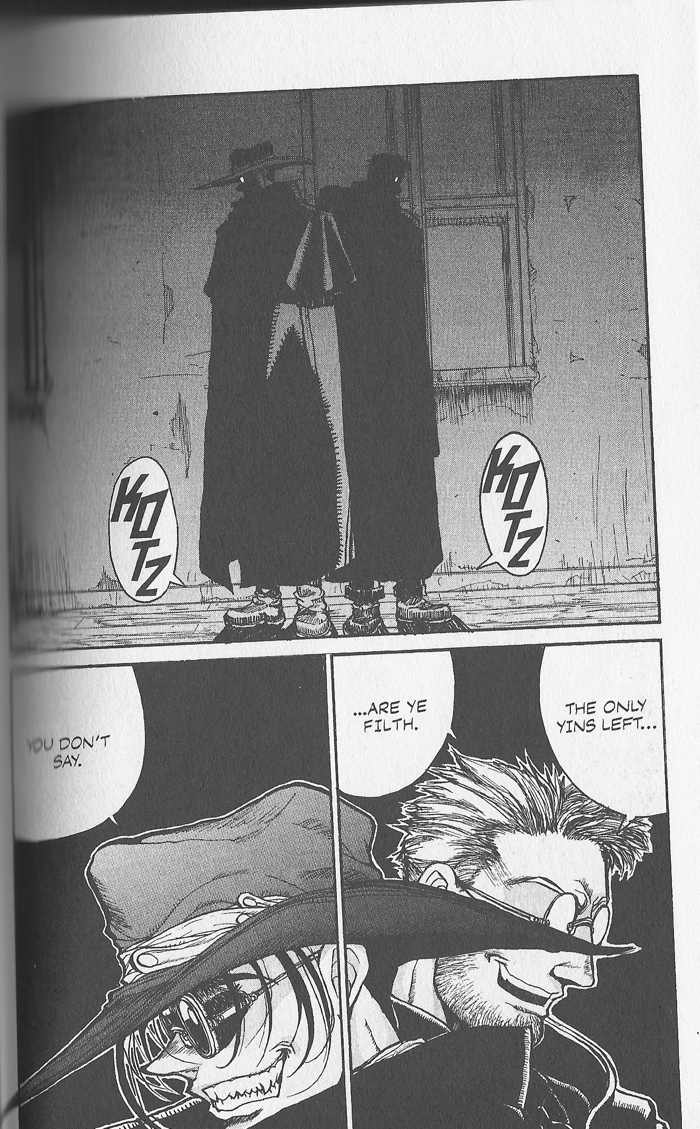 What Happens?
Anderson plants two bayonets in Alucard’s throat, but is blown away by a bullet to the head. The fight, however, is not over, as Alucard assumes. Anderson stands right back up and continues to fight, not going down no matter how many bullets Alucard puts into him. He impales Alucard against the wall, as the vampire realizes Anderson is a Regenerator. Anderson runs Alucard through with several more bayonets (where does he keep those?), and cuts off his head. 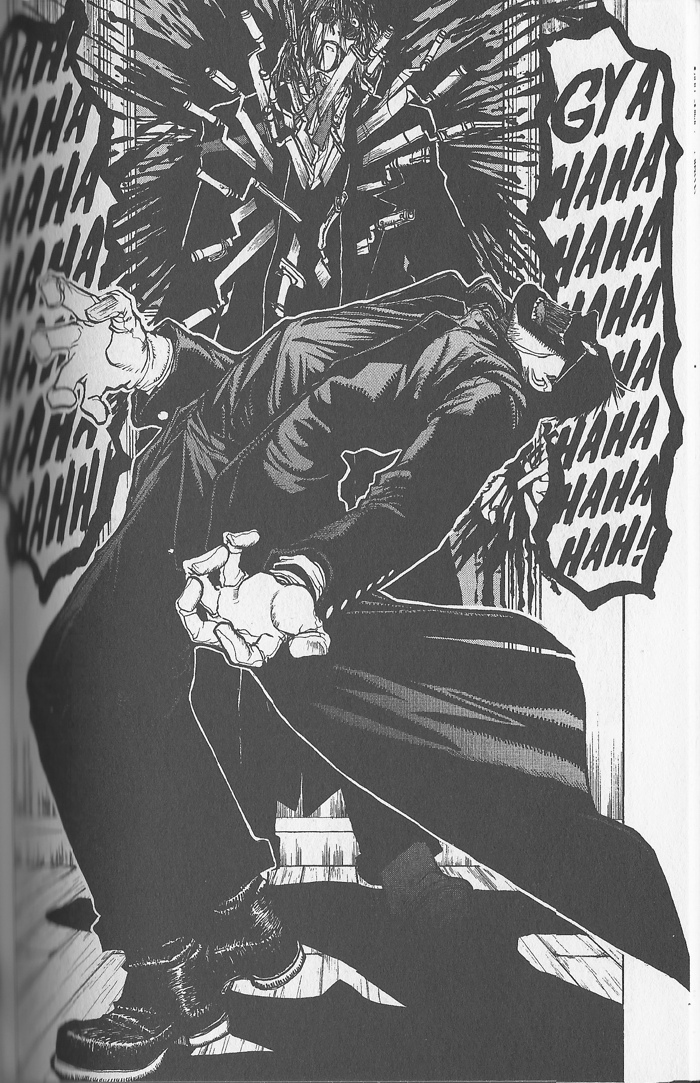 Seras tries to run, but finds herself surrounded by a barrier erected by Father Anderson. Alucard telepathically tells Seras to drink his blood to become a true vampire. Integra arrives at the scene, and tells Anderson to leave, telling him that the area is under their jurisdiction. Anderson kills her guards, and attacks Integra herself, but his boasts that he killed Alucard are met with derision. Integra says that Alucard cannot be killed as easily as a normal vampire, that he is the ultimate vampire, perfected over one hundred years by the Hellsing family. Realizing that his current gear will not be sufficient to finish Alucard off, Anderson leaves the premises via…magic teleporting bible pages? 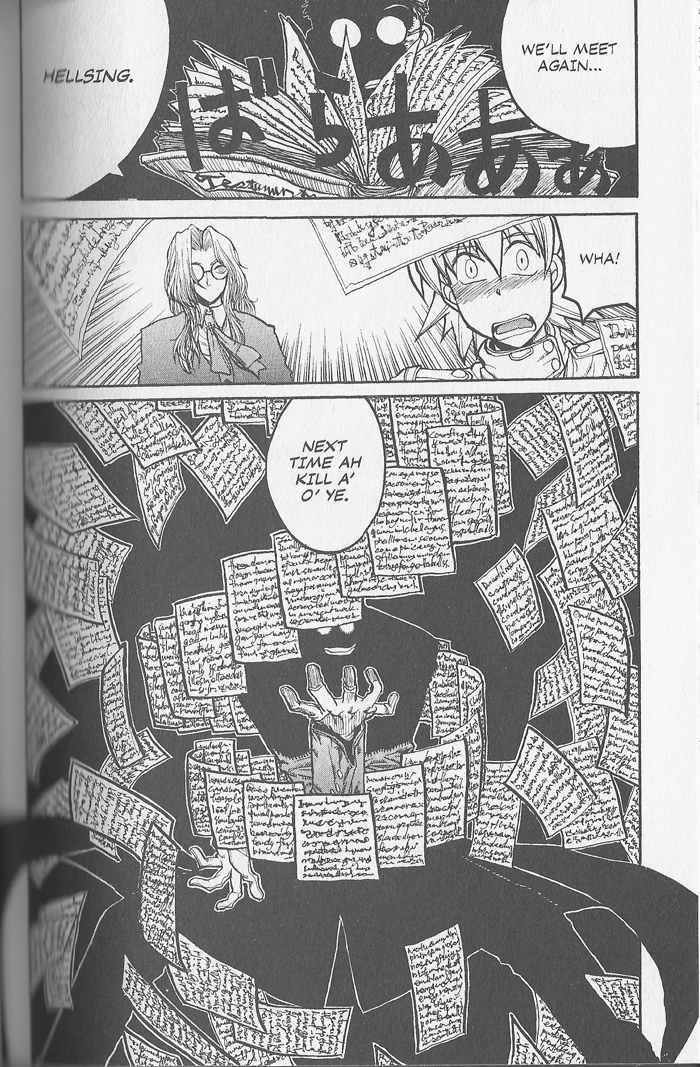 I have no idea what is going on here, but it looks cool.

What Does it Mean?
Every battle series has an eternal rival character—someone who can stand toe-to-toe with the protagonist as a respected opponent. And when your protagonist is the ultimate undead, then you need to cheat a little with your rival. Enter Father Alexander Anderson, a Regenerator—the culmination of human anti-monster technology—a man with regeneration powers that render him effectively immortal, and who for some reason fights with an infinite supply of bayonets, because shut-up-it’s-cool. Ladies and gentlemen, to combat our ultimate undead protagonist, we are given Scottish/Irish Catholic Wolverine. 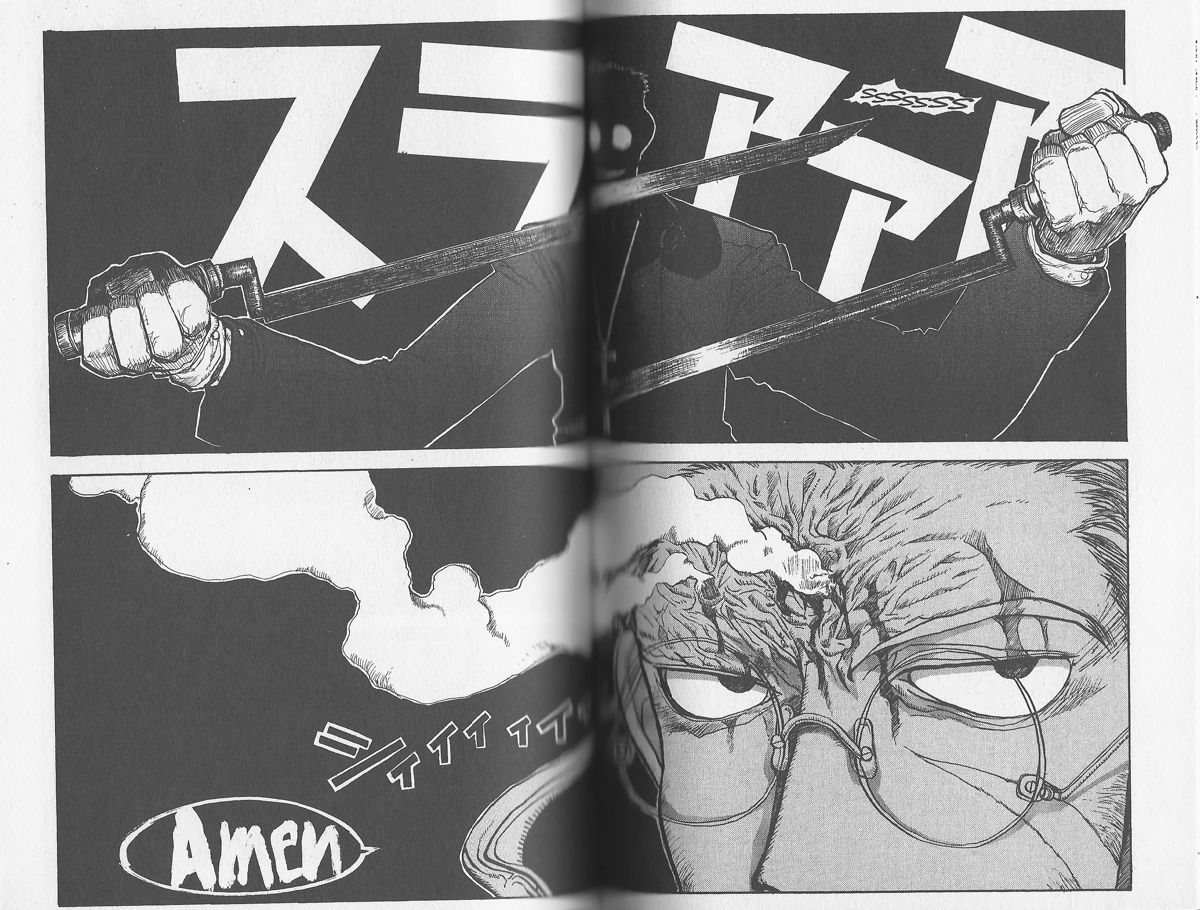 The fight itself is relatively short, with more focus being placed on the build up, presenting Father Anderson as a legitimate threat. And the follow-through is glorious, as Anderson completely overpowers Alucard. The purpose is to present Anderson as a seemingly insurmountable obstacle that Alucard will have to face in the future, so a lot of focus is placed on showing off Anderson’s abilities. His regenerating abilities are quite nifty, but it’s his choice of weapon that really makes him stand out. 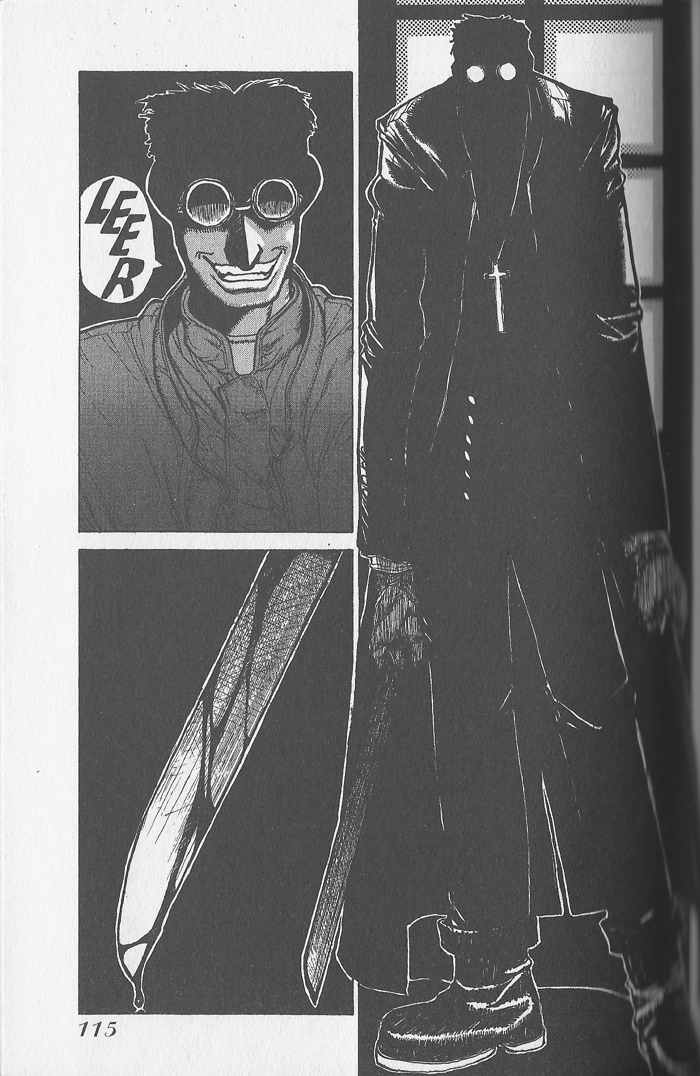 A series like Hellsing relies on characters standing out, and one of the best ways to do this is to give the characters gimmicks—just one thing that makes the character iconic. And Anderson’s use of bayonets is especially effective in this regard. Machetes would be just as effective (probably more so, considering they are more firmly mounted to their handles). But seeing Anderson wield his bayonets makes the reader pause and notice. It draws attention to the fact that Anderson is a badass who uses strange weapons simply because he can. Indeed his entire character, along with the way he holds himself, is designed to showcase the bayonets. 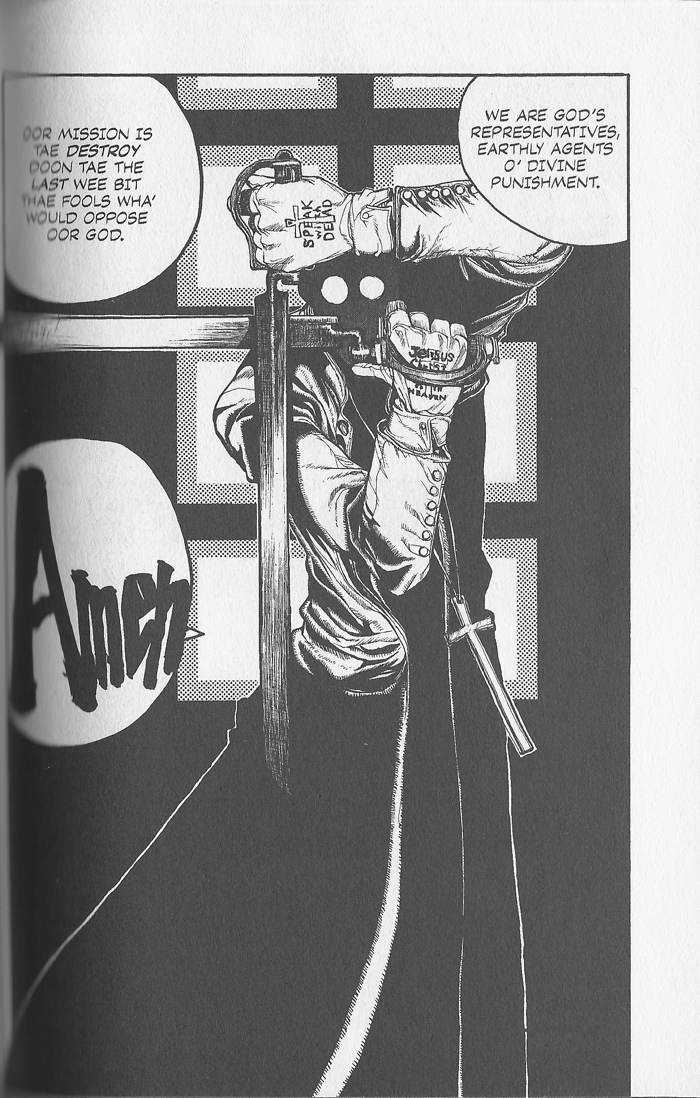 The way he holds himself, with his blades held down at his sides, brings to mind a long-armed ancestor of our kind. He seems primordial, and thereby more dangerous. His form represents a primal fury not found in modern, civilized man. Simply his bearing alone, with his elongated arms extended by his weapons, shows that this man is not to be taken lightly. 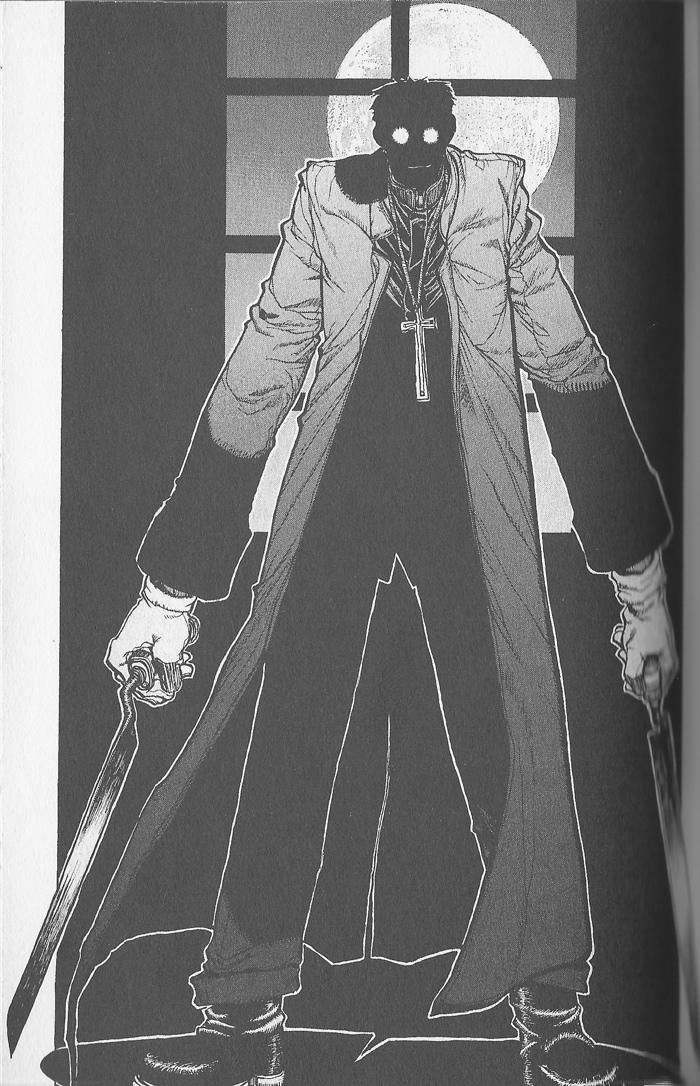 The glasses reinforce that dehumanization of Anderson. They reflect the light, creating perfectly round eyes that hide any possible humanity. Notice how on the following page your eyes are drawn first to the glasses. Then look closer, to really see the expression on his face. There is fear there, but the glasses partially obscure it. Anderson’s design focuses on making him as inhuman as possible, with just a few moments added in to show there is a man underneath the beastly appearance. 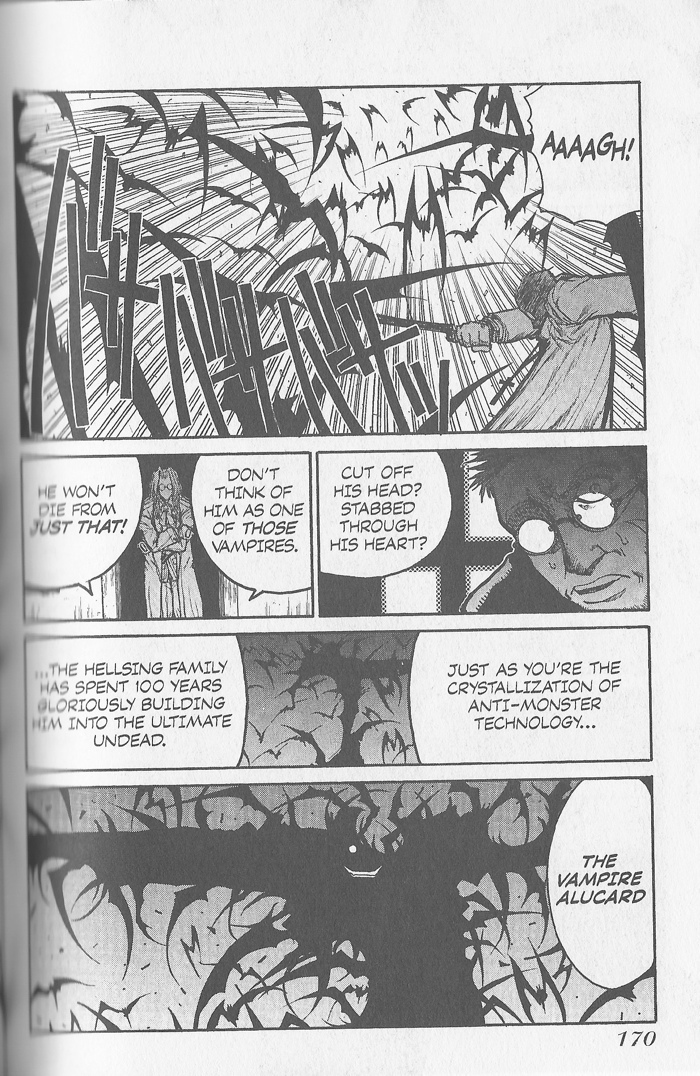 This fight is not quite a full fight, but rather serves as the introduction for the true fight to come later on. Father Anderson is given a chance to show off his abilities by way of introduction to the reader, while Alucard is allowed to present more of his considerable powers. Both have unique abilities that bring a lot to the table. A fight like this is crucial in the first volume. It makes a promise with the reader, that sometime in the future Alucard will face off against the indomitable Anderson. And the battle will be glorious. 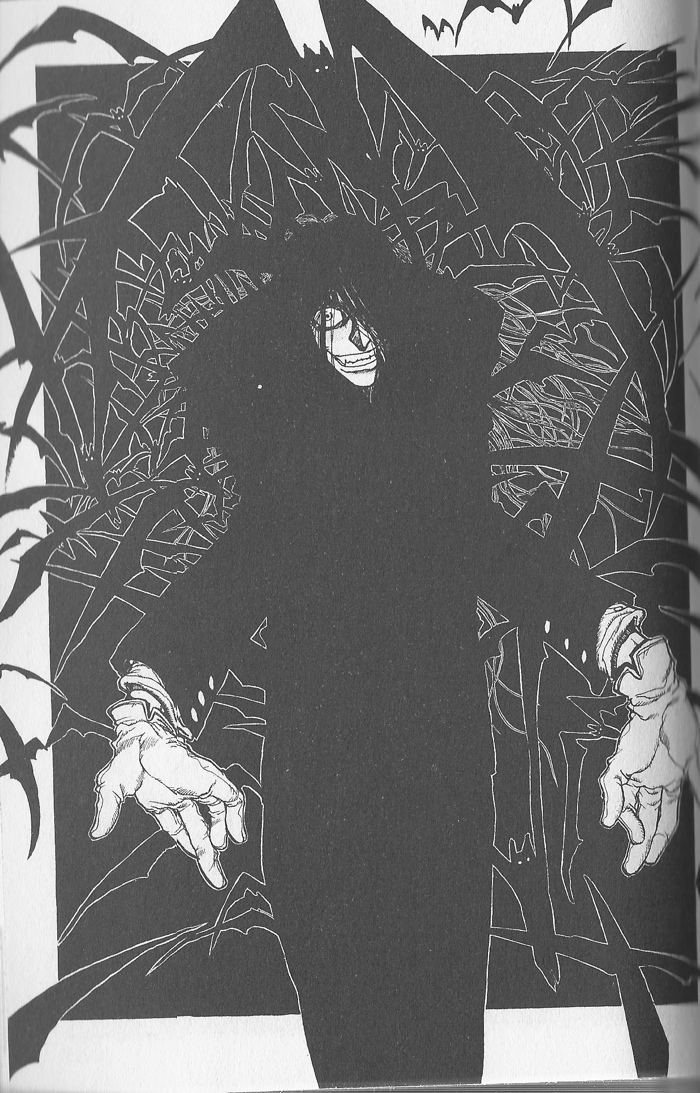