Bleach is similar to Naruto, in that it’s a popular series that has lost a lot of fans in recent years. Like Naruto, there is a tendency for people to dismiss Bleach as another overhyped series that has outstayed its welcome. And this would not be entirely untrue, but again, like Naruto, Bleach would not still exist if it had been a bad series to begin with. So it must have done something right. And as with many shounen manga, the answer lies in one of the most crucial aspects of the genre: its fight scenes. 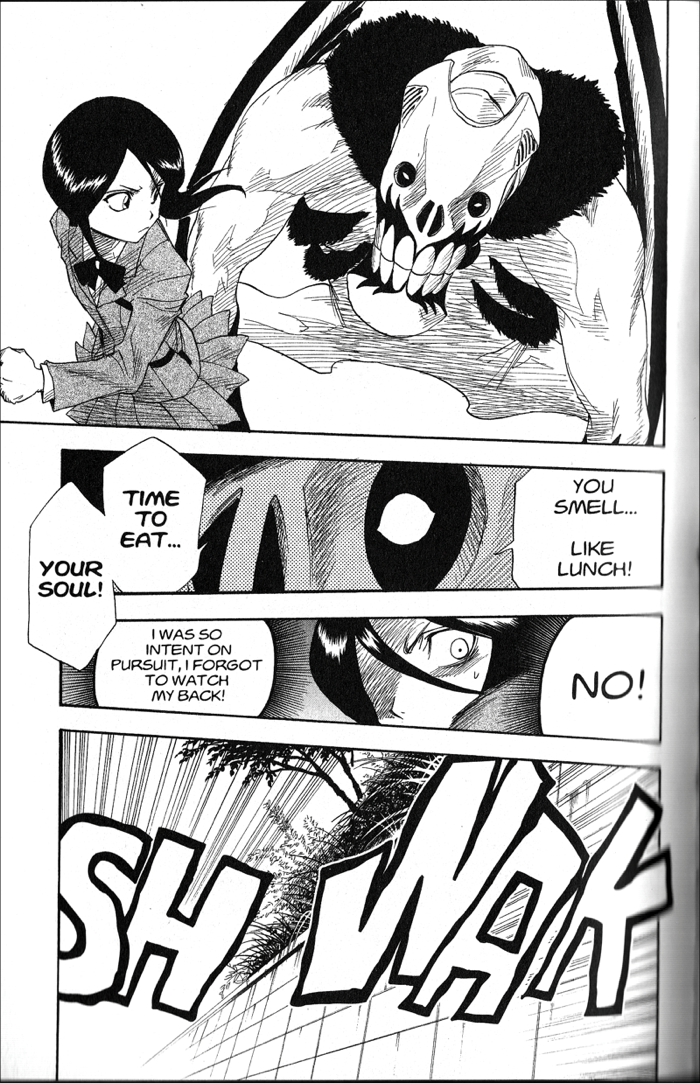 As a monster of the week series, it was essential for Bleach in its early days to capture an audience with interesting villains, and to find ways for those villains to be defeated in a manner that showed off its characters’ strengths and got the reader interested in reading the next chapter. To do this, some writers rely on cliffhangers, or introduce a new element at the end of the story to lead readers on to the next. Bleach, on the other hand, enticed the reader back each week by providing well-contained short stories that stood out on their own. 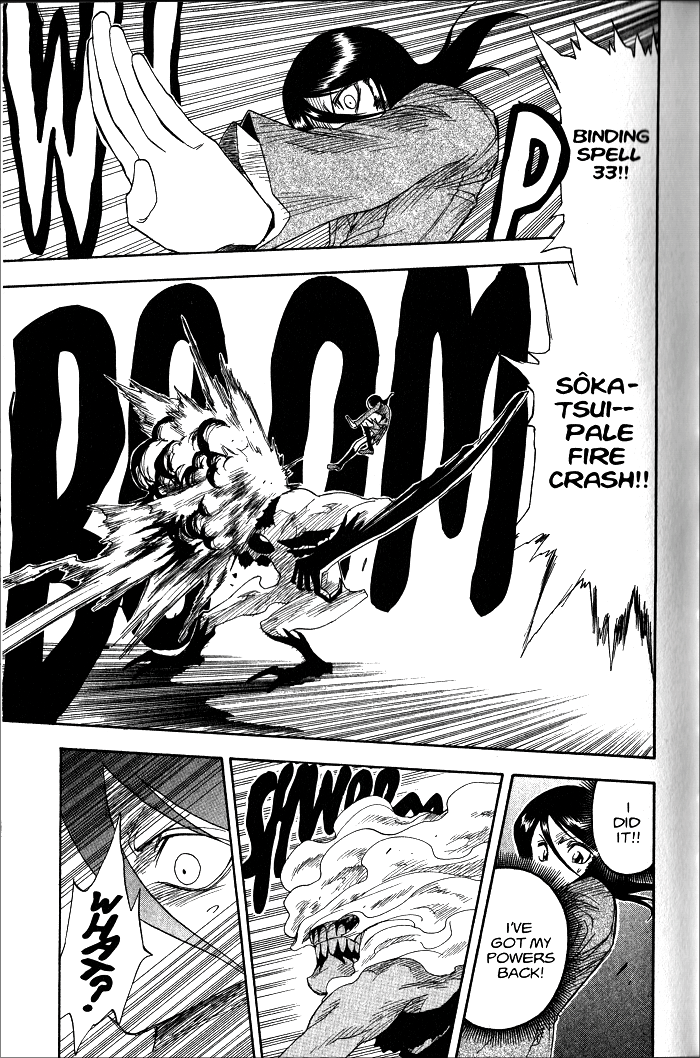 Chapters 9–12 provide the climax to a completely self-contained story. Instead of introducing a new thread at the very end of the story, Kubo instead finishes it and lets it stand on its own. He banks on the story being well-written and well-received enough that the reader will want to read more, not just because he wants to find out what happens next, but because he anticipates the next story being just as good. 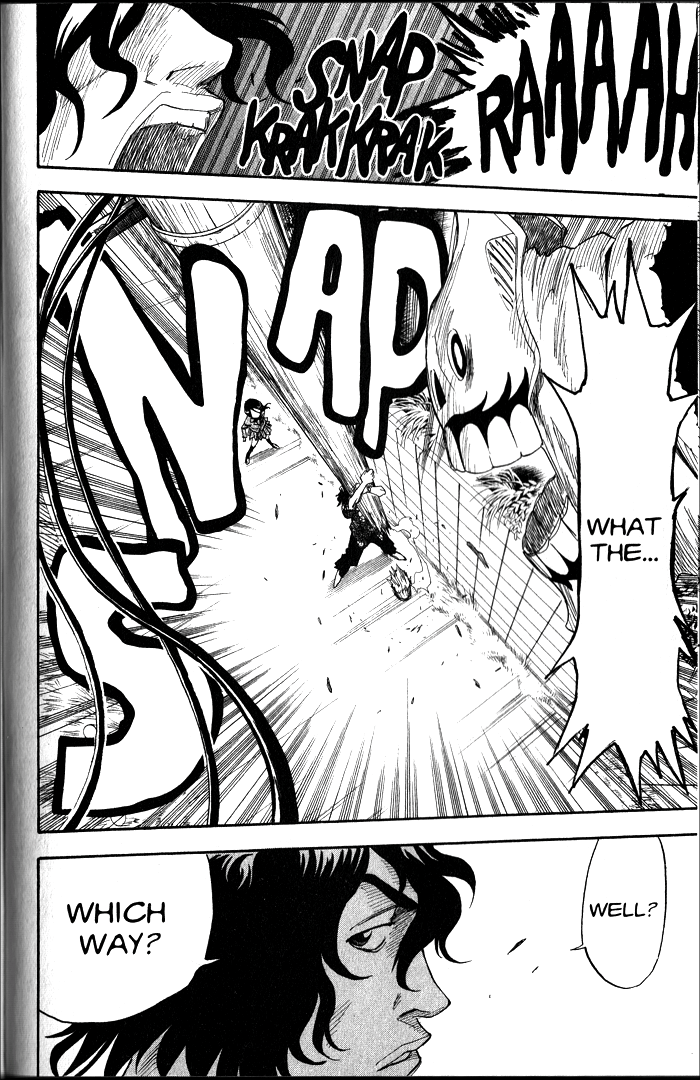 Prior to the final battle, Ichigo’s friend Chad has been running from an unseen enemy. Rukia and Ichigo manage to find him, and engage the enemy (a Hollow) in battle. The scale of the fight is small, but even a more intimate fight can take on real gravitas if the author sets the right stakes. In this case, the stakes are the lives of not only Chad (someone Ichigo has a personal connection to), but also that of a small child. In these chapters, the Hollow reveals that he was a serial killer in real life who died after the child, Yuichi, tripped him off a balcony. As revenge, he’s been tormenting Yuichi with false promises of returning his dead mother. 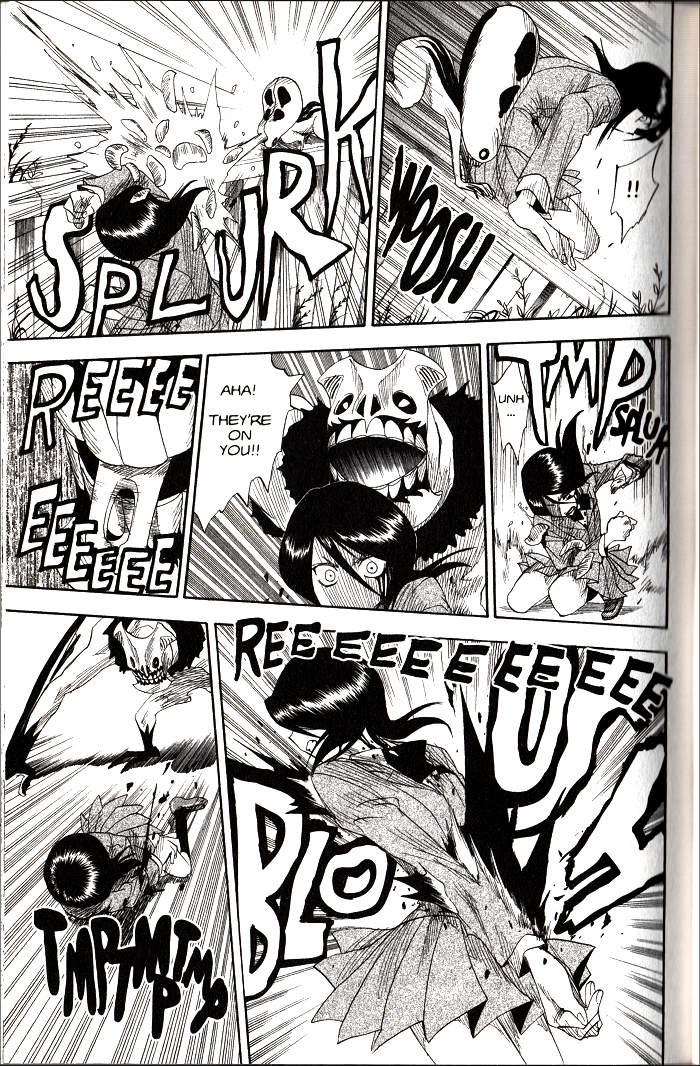 This Hollow is more distinct than the series’ previous enemies. He is not a mindless monster, consuming souls on instinct alone, nor is he fueled by resentment against a loved one. He is the first real monster that Ichigo encounters as a Soul Reaper—one that was evil, even as a human. He is built up by the narrative only to be hated, which makes his eventual defeat all the more cathartic. 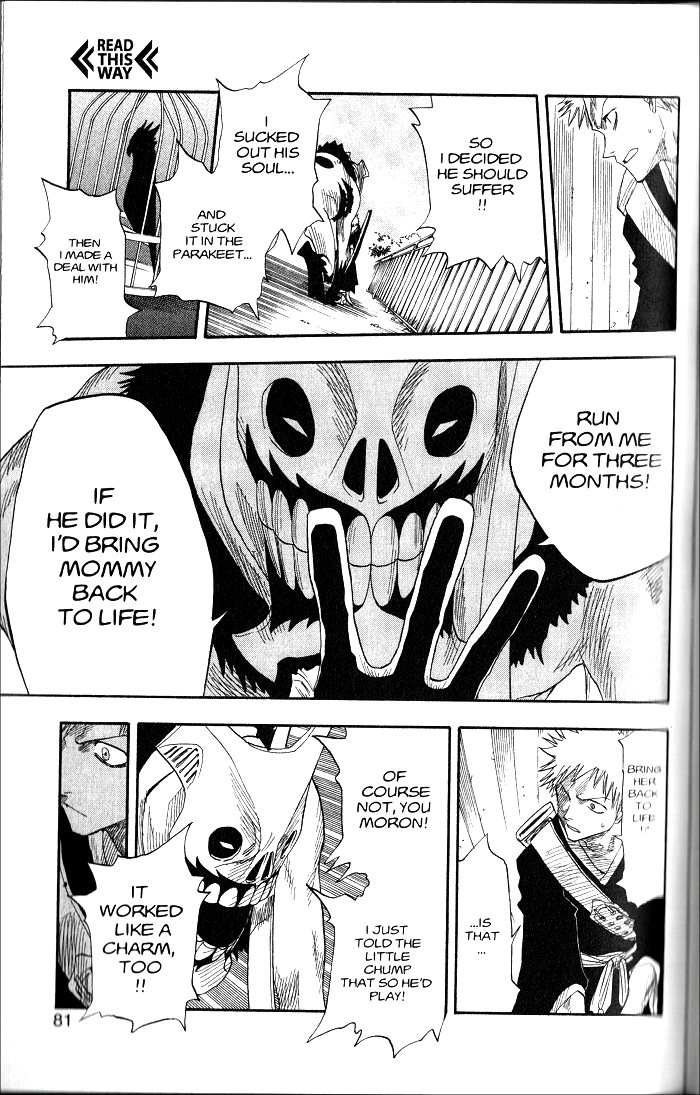 Kubo knows well how to represent motion with his drawings and panel layout. He gives the scene an almost cinematic quality, and unlike in his later work, he wastes no space just for the sake of looking good. Still, he knows when to indulge in a little more space to make particular movements dynamic. Ichigo’s final blow against the Hollow easily ranks among the better final blows in manga. His sword itself is not seen. Instead, the entire focus is on the motion, allowing the reader’s mind’s eye to truly see the motion of the blow. 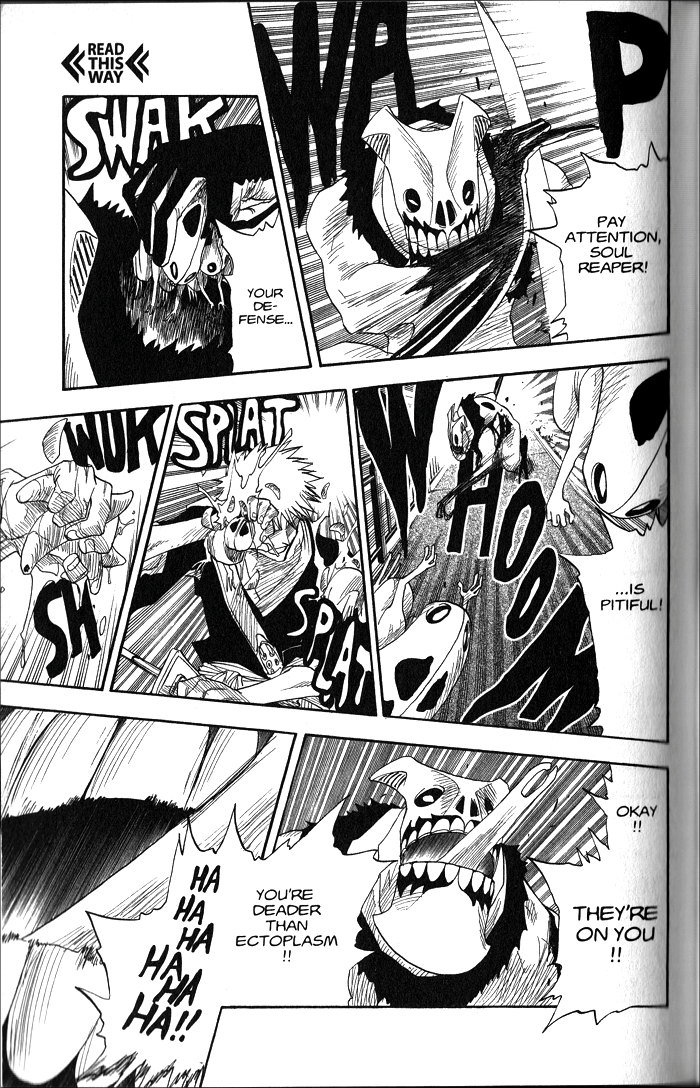 The downside of this fight is that Kubo robs the Hollow’s “leech bomb” attack of some of its threat by allowing Rukia (who has none of her spiritual powers at this time) to survive two blasts, so that later, when Ichigo is covered with these attacks, there is no real sense of danger. He is in so little danger, one can imagine the HP bar hovering above his head. So even though the vision of Ichigo shoving a handful of leeches into the Hollow’s mouth is the epitome of badass, its effect is weakened by our knowledge that he could have just let the blast go off and would have come out of it, at worst, slightly singed. 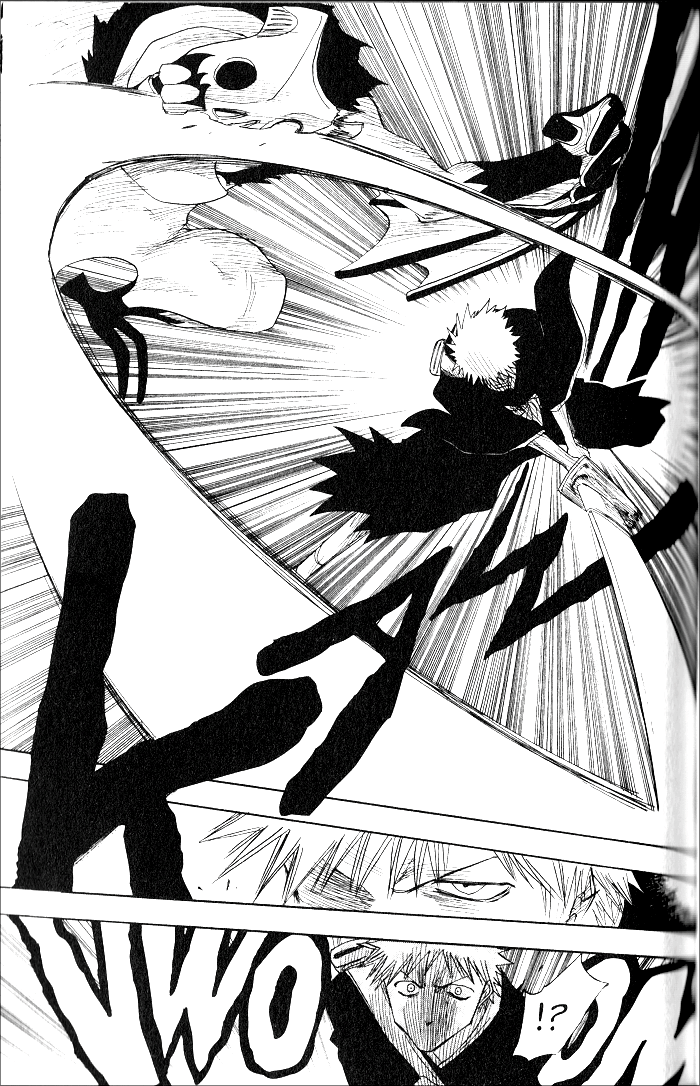 Kubo knew what he was doing, early on, when he chose to focus on individual fights with their own mini arcs. His style complemented this “all battles all the time” approach. And chapters 9–12 are prime examples of what Kubo looked like at his best. He knew how to put the right stakes on the line, and even if it was clear that Ichigo would not lose, there was still enough “cool” to keep that lack of danger from dampening the enjoyment of the chapters’ climax. 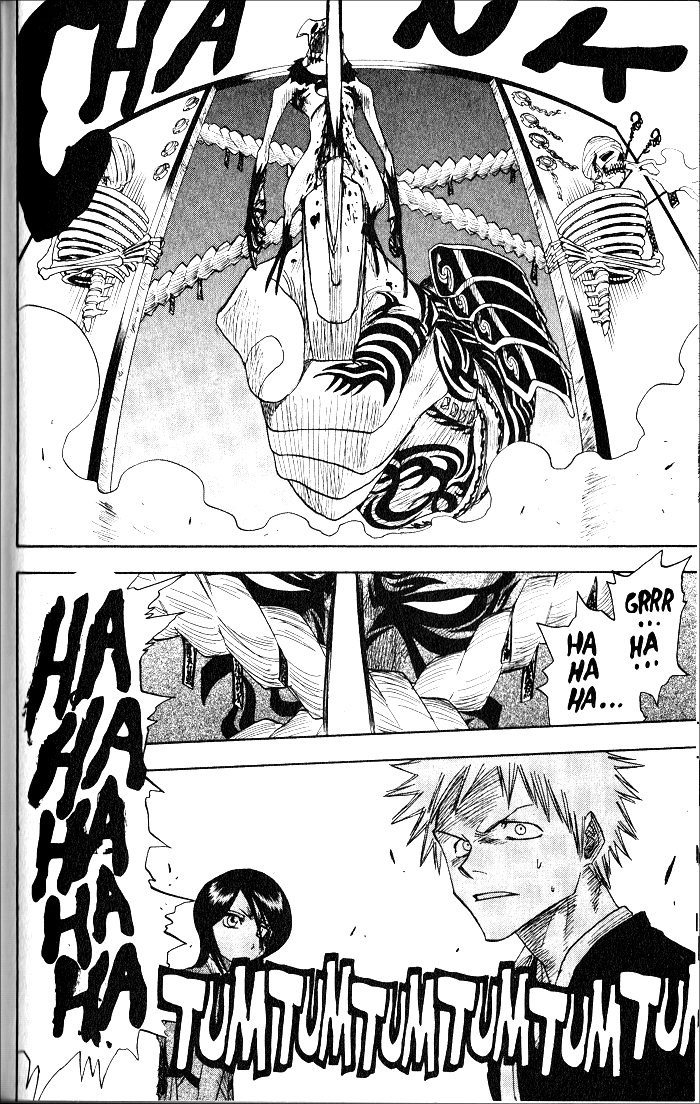 Remember to check out the awesomeness that is Derek’s Blog. Burning Lizard Studios.