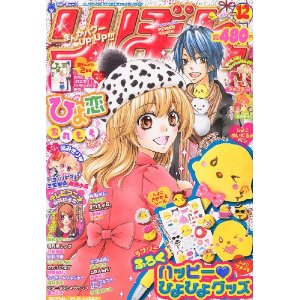 If Nakayoshi is the Queen of Shoujo magazines, Ribon is the Grand Duchess. Begun in 1955, Shueisha’s Ribon magazine is one of the unquestionable leaders in shoujo manga, with Kodansha’s Nakayoshi and Shogakukan’s Ciao magazines. Each issue of Ribon is approximately 550 pages. At 480 yen ($6.24 at time of writing), you’re getting more than a page per yen, plus fabulous presents -called furoku – with each magazine. Furoku are commonly stationery and pens or pencils, hair or phone acessories or bags of many shapes and kinds. (We have piles of Ribon furoku in my house. Sometime we get the magazine just for the goo-gaws.)

If you’ve been involved in the manga scene for any length of time, Ribon series will be very familiar names. Some notable series from Ribon are Marmalade Boy, Hime-chan no Ribon (now resurrected with a news series, Hime-chan no Ribon Colorful), and those series made so popular in the early days of Tokyopop and Viz Shoujo; Kodomo no Omocha (published in English as Kodocha: Sana’s Stage,) Ultra Maniac, Kamikaze Kaitou Jeanne and many of Arina Tanemura’s most popular series, like Full Moon o Sagashite. Currently running in the pages of Ribon is Tanemura’s “Sakura Hime Kaden,” published in English by Viz as Sakura Hime: The Legend of Princess Sakura. I was reading Ribon myself for Eban Fumi’s Yuri series Blue Friend, which was popular enough to get a second “season” and has recently wrapped up.

Of course Ribon has a website: http://ribon.shueisha.co.jp/ The site includes pages for this month’s issue, next month’s issue – a separate page for the furoku included with this month’s issue (I’m not kidding when I say the furoku is a major player here) – manga currently available in collected volumes, Manga how-to tips, information for the in-house manga competition to find new artists, and extras of many kinds, including cover page wallpapers, games, previews of new manga, profiles of readers, aka “Ribon Girls” and more. All of it surrounded by heart-filled, polka-dotted backgrounds and spinning, moving scrolling ads. It’s fantastic, really. You should take a look.

When most westerners think of “shoujo” style art, they tend to think of the Ribon house style; oval faces with slightly pointed chins, eyes not as large as Nakayoshi‘s house style, held up by long necks. Where Nakayoshi tends toward stories that glitter and shine, Ribon stories are more grounded, with real-life situations and pressures playing a major part of the drama. Think Kodomo no Omocha‘s Sana, mixing stories of being one of the beautiful people with real-life family crises.

Ribon is, to my mind, the paragon of current shoujo sensibility. While monthly readership has dropped in 2010 , 243,334 readers a month is something that few American magazines can boast.