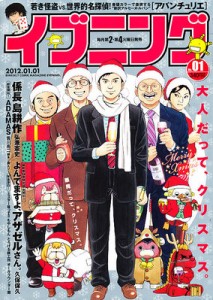 It’s a well-known, unwritten rule of otakudom that one should never write or talk about something that other people know anything about. If one should venture into known territory, there’s a high likelihood that someone will be moved to explain to you how wrong you are.

Many people are familiar with Kodansha’s Morning magazine, and its slightly odd twin brother Morning Two. Likewise, people are relatively familiar with their older sister, Afternoon. But, because it’s out all day at work, and doesn’t get home until late, very few people know about their big brother magazine, Evening.

Evening magazine has a 2010 circulation of 147,980/month. It sells for 330 yen for just slightly over 400 pages an issue. Evening is one of those magazines you see most walking into convenience stores anywhere in Japan.

A few of the Evening series are going to be well-known to western readers. Most well-known are Moyashimon, that comedic series by Masayuki Ishikawa about cute bacteria, which is still ongoing in the magazine, and BLOOD ALONE, Masayuki Takano’s manga that shifted from Dengeki Daioh to Evening. Evening was involved in another another notable shift, when Gunm, Last Order (translated here as Battle Angel Alita, Last Order) was famously picked up and huffed from Ultra Jump to Evening finish its run when the creator, Yukito Kishiro, had issues with management.

Of note to people like myself who like oddball series, is “Yondemasuyo, Azazel-san,” by Yasuhisa Kubo about “funny”  demons in hell (which has recently gotten anime treatment) and “Shoujo Fight!,” a series about women’s volleyball that will never make it over here because, while sports manga in the west sells indifferently, sports manga about girls never even make it here at all. Forget then, ever seeing “O-Gari,” Tachiko Aoki’s action gaming story around women playing Shogi. (Fans of Saki, and Shion no Ou take note of this one.)

On Evening‘s website, one finds the typical features one expects with a manga magazine website – series overviews, interviews with creators, sample comics, features of new series, downloads and, somewhat less usually, a job board and special non-profit collbgoration with Father’s Quarterly (FQ) magazine related to a series “Prochichi,” a story about a stay-at-home father by Mieko Osaka.

Instantly a reader of Evening will realize that they are presumed to be an adult. The focus is on story, character and art, instead of gimmick or service. Where something like “Captain Alice” would, in Ultra Jump be full of T&A, in Evening, it focuses on great reactions shots and a surprisingly detailed  plane interiors. It’s easy to imagine salarymen picking up a copy of Evening on their commute home, and so they do.