Your wish is heard; a rich man you shall be!
Bits & Blips: Manga Bookshelf Edition

Once upon a time there lived a stonecutter, who went every day to a great rock in the side of a big mountain and cut out slabs for gravestones or houses. He understood very well the kinds of stones wanted for the different purposes, and as he was a careful workman he had plenty of customers. For a long time he was quite happy and contented, and asked for nothing better than what he had.

But we all know that kind of thinking won’t make you the 1%.

So says the Japanese folklore story, “The Stonecutter” which was the inspiration for this game.

Sutakku (スタック: stack) is a push-your-luck dice rolling game from Smirk & Dagger for one or more players of all ages. The game plays in five rounds, at the end of which the player with the highest score is the winner. It’s a quick game with very simple rules that anyone can learn.

Sutakku comes with 12 gorgeous 19mm (3/4”) dice, a dice bag, a score pad, a small deck of bonus cards, and a two-piece gameboard which players can use for building their dice stacks. The board also serves as a translator since the dice use Japanese kanji instead of pips which adds to the flavor of the game.

I can’t praise the dice in this game enough. I love both the size and the debossed Japanese numbers. They are quite heavy and hit the table with a satisfying “thunk” when you roll them. For me, this is important stuff for a dice game and Smirk & Dagger doesn’t disappoint here.

The rules also include the complete tale of “The Stonecutter”. 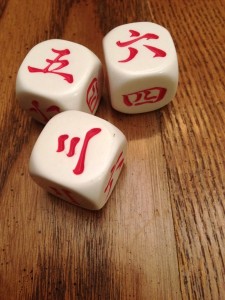 The goal is to make a stack of dice that’s worth as many points as possible without “busting”, which means getting a “0” score for that round. When creating your stack, each die added to the stack must be the same or higher value than the die below it. This is not a dexterity game, so if the stack falls over there is no penalty; simply rebuild it.

On your turn, you’ll roll three dice. Two dice must then be added to the stack (or start a new stack if this is your first roll). If you cannot add two dice, you’ve busted! If you can add two, you do so and then it’s decision time: do you roll again or do you stop? If you stop, you score your dice (see “Scoring”). If you decide to continue, you’ll again roll three dice and will have to add two of them to the top of stack. As the number on the top of the stack gets higher, it becomes less likely that you’ll roll successfully. But the points…! 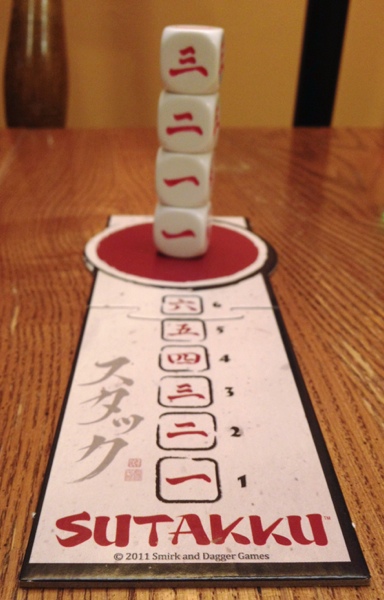 Once per round, a player may take a “mulligan” to attempt to get better results. However, only two dice are rerolled and both of them must be able to be added to the stack.

If a player stops rolling without busting, their score for the round is calculated. The score is equal to the number of dice in the stack multiplied by the number on top of the stack. So a stack of four dice with a 6 showing on top is worth 6 × 4 = 24 points.

There are bonuses available for living dangerously. If you continue rolling when the top die of your stack is a 5 and you succeed, then you get 50 bonus points. If you do this with a 6 at the top of your stack, you get 100 bonus points.

A real challenge is to try and create a tower of all twelve dice. Doing this successfully will net you 200 points in addition to any other bonuses you earned. There are special rules for what to do when you only have one or two dice left to roll which will help. It’s still a fairly unlikely but magnificent feat if pulled off.

At the end of the fifth round, the scores are totaled and the player with the highest score wins. 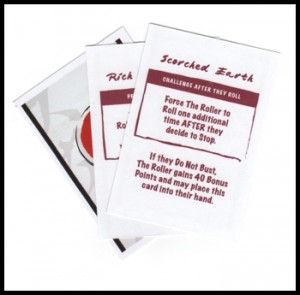 Smirk & Dagger games are generally known for having a “take that” aspect to them. Sutakku didn’t originally have anything like this in the game, and apparently during pre-release plays the fans and reviewers were disappointed in this oversight. Personally, I don’t understand the mentality that a game company should be required to live up to some sort of reputation for a specific mechanic in all of their games, but regardless the call for player screwage was answered and some bonus cards were added to the game.

When playing with the optional cards, the player who wins the right to go first gets one automatically. Subsequently, any player who busts while attempting to build on a stack of only two or three dice will gain a card. The cards are usually meant to be played on another player, but some may be played on yourself if you like. Most of them are pre-roll challenges where the player who gets the card played on her has to meet stricter criteria in order to avoid busting. There are also after-roll challenges and counter action cards. Often there is a risk associated with the cards in the form of a bonus if the roller manages to meet the challenge. Only one card may be played on a player at a time.

My test group played several games both with and without the cards. We found the game enjoyable either way. If you’re playing with any sensitive players in the group, leave the cards out. They are good, but not good enough to warrant making a player feel targeted if that’s not the kind of game they are into.

Sutakku is a good addition to the field of push your luck dice rolling games. If you enjoy Farkle, Cosmic Wimpout, or Can’t Stop then this game will probably fit well in your collection. Plus, the dice alone are worth the price of admission.

If you’re looking for strategy, well, there really isn’t any here short of understanding odds and honestly if you’re putting that much thought into this game then you’re probably over-thinking it. This is a quick filler or a “Hey, I think I’m not too drunk to count and stack dice” kind of game.