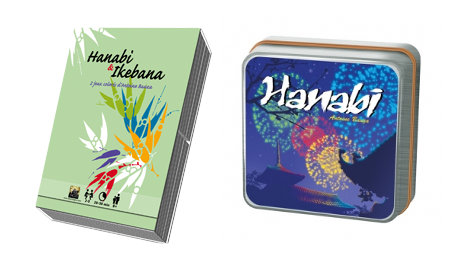 French designer Antoine Bauza made a name for himself with big hits such as Ghost Stories and 7 Wonders, the latter of which netted him the 2011 Kennerspiel des Jahres, the German award presented for the Enthusiast Game of the Year. However, the lesser known but highly praised card game Hanabi originally published by Les XII Singes and later published in a different format by Asmodee and Cocktail Games is every bit as good as its two siblings. The original edition that I’m using for this review also includes a second game called Ikebana playable with the same components, but I will only be covering Hanabi.

Hanabi (花火, flower fire) is the Japanese word for fireworks. In this game, 2 to 5 players will be working together as a team of inattentive pyrotechnics experts who accidentally mixed up the components of a large fireworks display and must help each other try to create a spectacle which will be judged by the International Federation of Pyrotechnics Experts. Succeed and render the crowd speechless. Fail, and you might be booed off of the stage!

Hanabi is a cooperative card game which means everyone will be playing together to try and get the highest score possible for the team. The catch? You can see everyone else’s hands of cards, but you can’t see your own! Players will be holding their cards facing outward and may not look at the cards in their own hands. 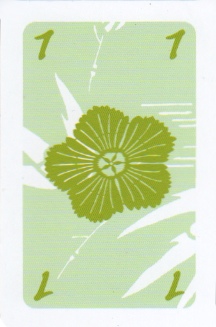 The deck consists of 50 cards in five colors (red, orange, blue, black and green). Each color consists of the following cards: 1,1,1,2,2,3,3,4,4,5. At the beginning of the game, the cards are shuffled together and a hand of either 4 (4 or 5 players) or 5 (2 or 3 players) is dealt to everyone. The cards are picked up by each player with the backs facing them so that they cannot see their own hands but may see everyone else’s. The game also includes colored tokens. 8 blue tokens are placed on the table in the box cover and three red tokens are placed next to the box cover on the table.

The goal of the game is to build five complete fireworks displays. This is accomplished by making five stacks of cards (one in each color) that go from 1 to 5 in sequential order. On your turn, you must take one of only three possible actions:

Giving information to another player costs one blue token which will be removed from the box cover. If there are no blue tokens available, then you cannot give information and must perform one of the other two actions; you may not pass. When giving information, you are allowed to tell one player about the quantity and location of all cards that are the same color, all cards that have the same value, or the absence of a card of one color or value in that player’s hand. For example, you could say “You have two green cards; here and here,” or “You have three 2s; here, here, and here,” or “You have no blue cards.” No one else may say anything and you must give information about all of the cards that match. So if you are telling a player about red cards, you must point out all of the cards which are red. 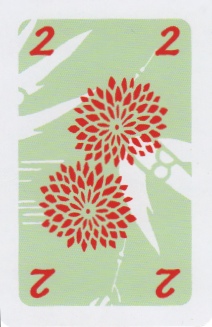 When discarding a card, you will simply declare that you are discarding a card and then place that card in the discard area. This card is out of play permanently, but it will now be visible to everyone including yourself. You then draw a card from the deck so that you have the same number of cards that you started with. But more importantly, you may return one of the blue tokens to the box cover. This is how you “recycle” the blue tokens so that more clues can be given. Remember, you only start with 8 blue tokens and no one knows anything about his own hand!

Finally, you may play a card to the display area. To do this, you need only declare that you are playing a card to the display area. You do not have to state what the card is or on which firework you are playing it. If the card may be legally played as the start of a new firework or on an existing firework, hooray! You place the card in its proper location in the display, draw a replacement and play passes to the next person. If the card was a legally played 5, then as a reward for completing the firework you get to return a blue token to the box cover. But be careful; if the card was not a legal play (e.g. you played a blue 4, but the top card on the blue pile was a 2, or you played a red 1 but there was already a red firework started) then you cause an explosion! You place one of the red tokens in the box cover. If you place the third red token, the game ends immediately. Your display goes up in flames and the team loses the game! 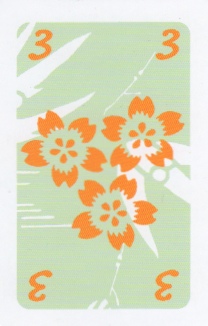 Those are all of the rules. The rules are easy, but the strategy is the fun part.

At the end of the game, the top cards in each stack will be added together. The higher you score, the more impressed the crowd is and the better your rating.

Players have to work together to figure out which cards they are holding. Information is very limited, so frequently players will need to infer additional information from the information they are given. For example, if the blue firework display is currently at 3, and someone tells you “you have a blue card; here,” did she tell you that because it’s a 4 and you should play it? Probably. Other times it will take information from more than one player to narrow down a card. Remember, you’re not allowed to give advice to the other players.

The card distribution is also important to remember. There are three 1s in each color, so losing one of those will probably not be a big deal. But there are only two of the 2 through 4 value cards and only one of each 5. If someone discards a blue 3, the other blue 3 will suddenly be very important because if it gets discarded, the blue firework display will never be able to reach completion.

Giving other players information about what card or cards they can safely discard will also help the team regain valuable blue tokens. For example, if all of the fireworks have been started, then all further 1s will be useless. 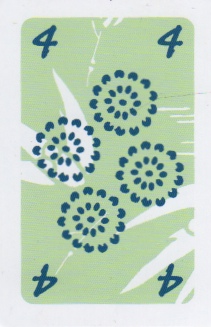 Memory is very important since each player will be getting information about her hand that may or may not be immediately useful. I often find myself thinking things, “Okay, this is a 3, these two cards are blue, and this card is black. Do I know anything about the other cards? Well I guess I know they aren’t 3s, blue, or black, since I haven’t played any of these cards yet” Yes, it’s deliciously tricky!

The biggest drawback to this game is in the cards themselves.

In the original edition the art is simple yet attractive, but the colors are very hard to discern even under the best lighting conditions. The blue and black cards especially are very difficult to distinguish. Colorblind players will have an exceptionally hard time playing the game because the card suits are only differentiated by color.

In the second edition, the problems with the colors were fixed and symbols were introduced on the cards making them colorblind friendly. However, the art is somewhat more garish and the cards were made in a large square format. Since this game requires you to be holding a hand of cards up visible to all players for the entire game, anything that makes the cards more cumbersome, like an awkward shape, is just unnecessarily complicating things.

Finally, it’s a card game. Sometimes you get a bad shuffle. But that’s always the case with card games. 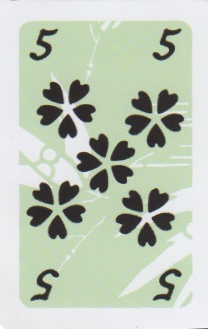 Hanabi is a simple game to play with rules that can be learned in just a few minutes, but that doesn’t mean it’s an easy game by any means. Good strategy and teamwork are required to get high scores. This game has been a big hit with my gaming group as well as non-gamers. A frequent problem with cooperative games is that one person gets bossy and essentially plays the game by himself. That can’t happen in this game by its very nature.

The rules are in French, but translations are available at BoardGameGeek in several languages.

Now for the bad news: this game is pretty hard to find in the US. Your best bets are the Canadian store Le Valet d’Coeur or the French store Ludibay. Shipping from Canada to the US is usually not bad but shipping from France can be quite expensive. It retails for around $15.

If you can find a copy, I highly recommend Hanabi.