Our heroine is an ordinary young woman. She makes the ‘mistake’ of getting involved with a young man who is both handsome and a movie star, a popular singer, rich, a prince, or some other glorious thing. When they first meet, they do not get along. And somehow, another handsome, popular, wealthy, or high-class young man gets involved.

Of course, these young men are not equal. One of them has a higher social status than the other. I will henceforth refer to the higher-status one as ‘overdog’ and the lower-status one as ‘underdog’. 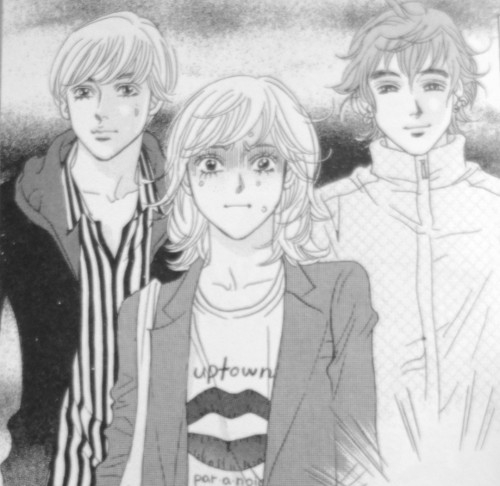 Through a contrived set of circumstances, the heroine has to move in with and/or get married to at least one of these young men. Perhaps it is because she has financial problems, or perhaps because her family made her do it. While many people would love to live with/marry handsome, popular/wealthy/high-class young men, because the heroine was forced into this situation, her plight is sorrowful. 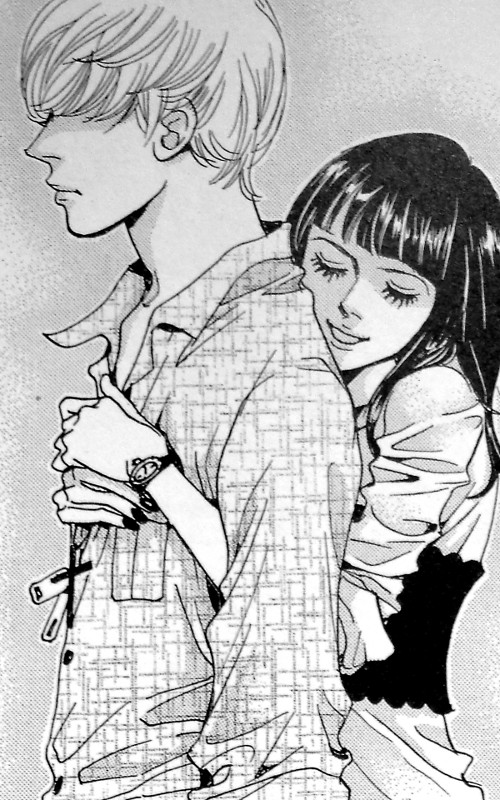 Overdog is not interested in the heroine at first. He even has a girlfriend that he has real feelings for. But he falls in love with our heroine, and covers up the fact that he is in love with her, saying that he only agreed to the arrangement for convenience or some social reason. 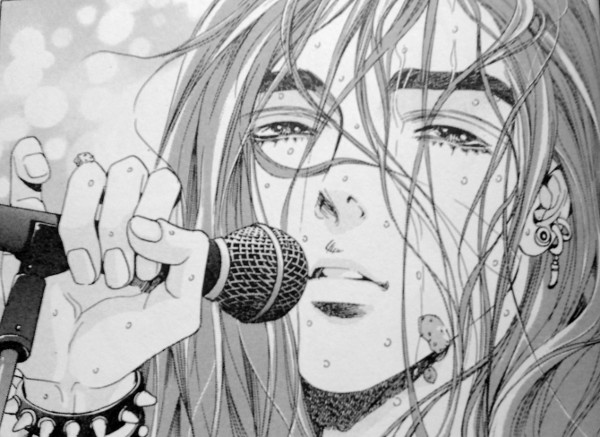 Underdog, on the other hand, is much more open about his feelings for our heroine. Our heroine is his first love. Whereas overdog is about as supportive as a block of ice, underdog is always there to offer our heroine a shoulder to cry on. Of course, even though underdog is not as popular/wealthy/high-class as overdog, he is still sufficiently so to attract the attention of other girls. 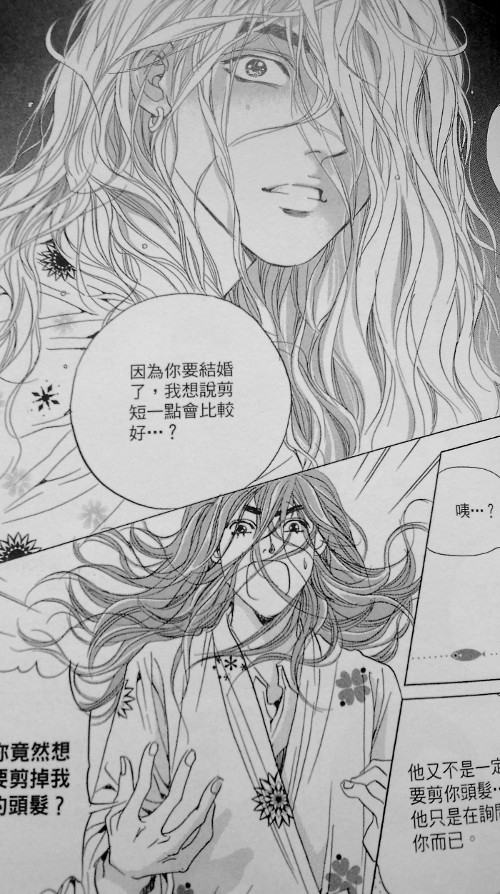 I generally find the characters in Mary Stayed Out All Night uninteresting, with a major exception: Kang Moo-Kyul.

Kang Moo-Kyul is like a patch of grass which, after being stomped upon, straightens right back up. It is hard to put him in a bad mood, and even harder to keep him in a bad mood. Under circumstances which would have the leading males of most shojo/sunjeong comics convulsing with angst, he thinks about the situation, fixes what he can and stays calm. While he might not go back to his usual cheer right away, he recovers faster than most of his sunjeong/shoujo-male-character peers would. Of course, being about as mature as a typical 25-year old, he is more mature than most of those peers.

The word which best summaries Kang Moo-Kyul’s personality is ‘free’. He is not a conformist; he feels no obligation to do things the conventional way. He is also not a rebel; he is perfectly happy to do things the conventional way when it happens to be what he wants to do anyway. According to him, the best way to go to a wedding is to arrive on a kindergarten school bus – with the kindergarten students on board. And this freedom is what attracts other people – both his fans (his band – “Strawberry Corpse” renders death metal music in a cheerful and silly way) – and Mary herself.

This is what I truly love about this manhwa. The Taiwanese edition shows off the artwork very well, with its enlarged page size. In fact, Sooyeon Won fans, even those who cannot read Chinese, should seriously consider buying the Taiwanese edition, or the Korean/Japanese editions if the production values are equally high.

First of all, the artwork is extremely expressive. It is the equivalent of casting top-notch actors to bring the story to life. Look at these examples: 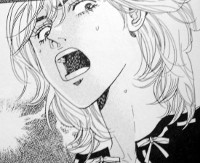 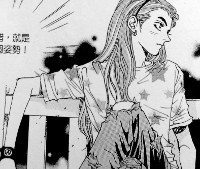 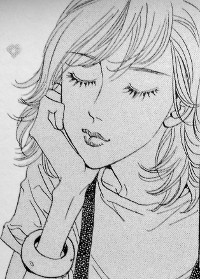 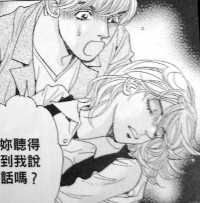 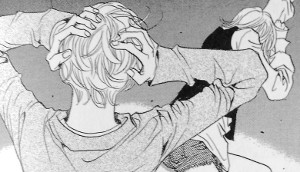 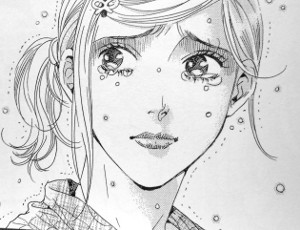 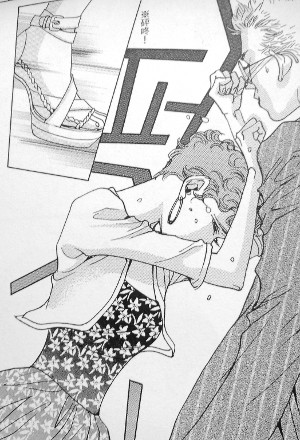 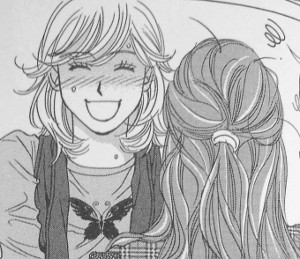 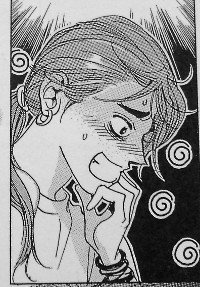 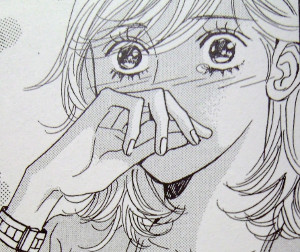 The shading, color, and layout are the equivalent of hiring a top-notch director and top-notch designers to bring the story to life. 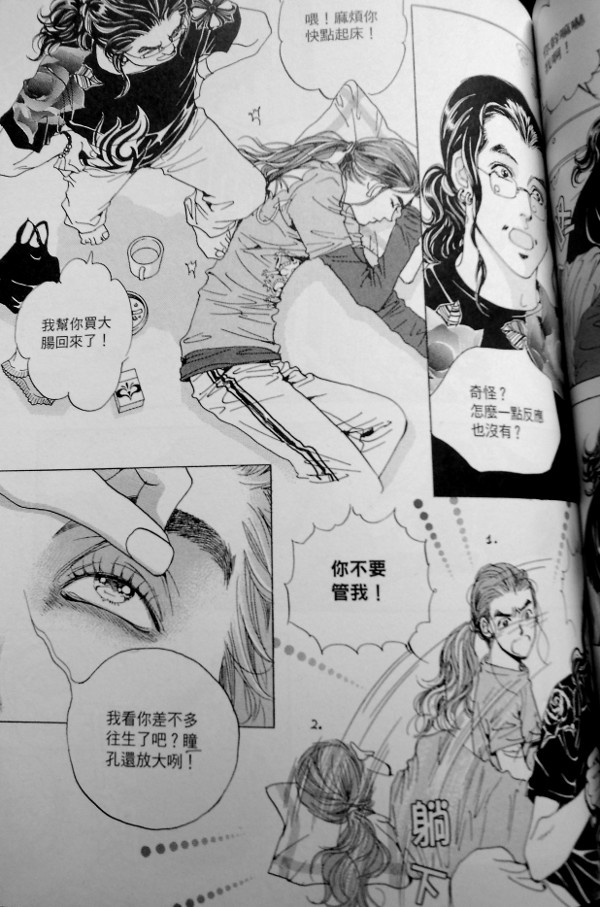 These elements individually provoke visual interest – the perspective of standing versus lying down, the mix of boxed and un-boxed panels, and the movement as Kang Moo-Kyul rises. However, they combine together to lead the readers’ eyes in a diagonal line of sight from the top left to the bottom right – and diagonal lines of sight are almost always more dynamic than horizontal or vertical lines of sight.

There is also sporadic use of color. The rarity makes the moments where color is used special. My favorite use of color is this page. 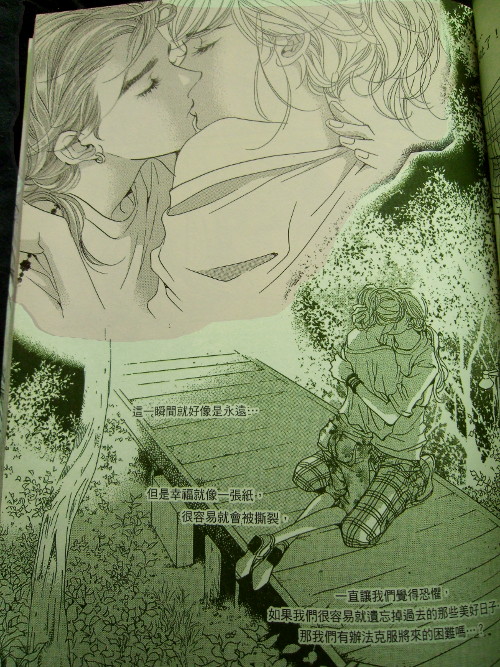 Individually, both of these colors would read as ‘black’, but used together they are clearly distinguishable. It is a lot more subtle than using two pigments which would never be read as ‘black’, and really highlights how this moment is different from other moments in this manhwa, yet is very much in the flow of the story.

This was too subtle for my camera, so I had to tweak the image into order to make the effect visible, and my tweaks are quite crude. Nonetheless, it is at least possible to see what I am writing about.

And there is a moment which displays Sooyeon Won’s skill particularly well.

If, on a street, a woman was running in tears, a man was chasing the woman, and a second man was staring blankly, most bystanders would pay attention to the woman and the man chasing her. They would not even notice the man blankly staring. Look at this: 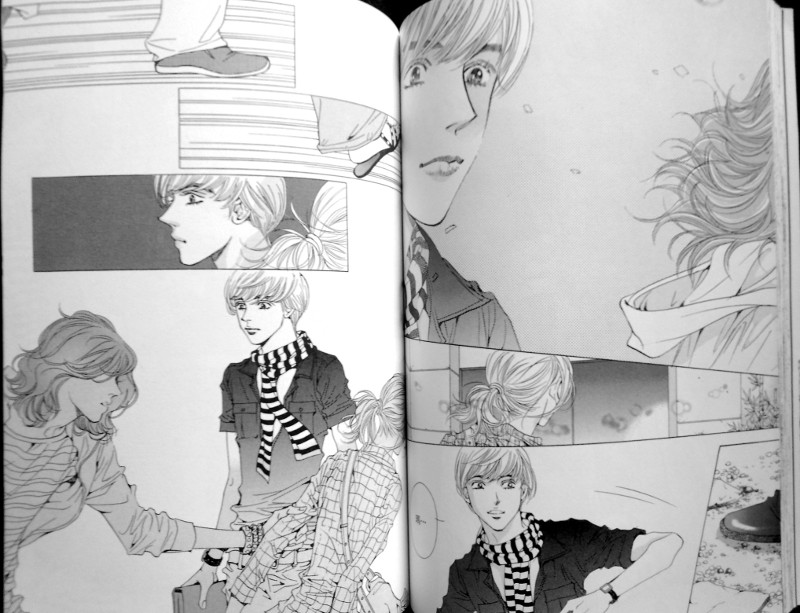 Sooyeon Won directs the readers attention to Jung-In and away from Mary and Kang Moo-Kyul. She does this by:

1. Only showing Jung-In’s eyes, and not showing Mary’s face (the tears would grab too much attention).
2. Putting Jung-In in the center.
3. Shading Mary and Kang Moo-Kyul while keeping Jung-In looking bright. The human eye tends to move away from dark things and towards bright things.

This moment is not about Mary or Kang Moo-Kyul – it is about Jung-In, and Sooyeon Won makes sure that the reader knows that. And having a very compelling subject (a man chasing a woman in tears) yet managing to pull all of the attention to a different subject is in itself very dynamic.

While I am most impressed by the artwork, the story is solid, the jokes are funny, and Kang Moo-Kyul more than compensates for the blandness of the other characters. I sincerely hope that NETCOMICS or another publisher will put this out in English, and sooner rather than later.

Sara K. has previously written the following guest posts for Manga Bookshelf: Why You Should Read (and Want More) Evyione:Ocean Fantasy part 1 and part 2. In order to have something to read on the train, she brought her copies of volume 3 and 4 of Mary Stayed Out All Night to the peak of Filial Son Mountain (yes, she even brought them up the ladder).