Collecting manga without breaking the bank: A guide to snagging manga for cheap 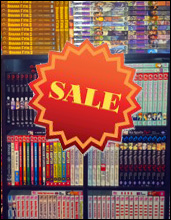 Hello! I’m C.J. Thomas, a manga fan who has been collecting for about a decade. In order to get my fix, I needed to find new ways to get what I love cheaper. Please enjoy the strategies I’ve developed over years of trial and error, and use them well!

Most of us around here collect manga, and most of us would collect more manga if the cost didn’t add up so quickly. I’m here to share with you my secrets to snagging vast quanities of manga at discounts of up to 60%! And it’s much easier to do then you might suspect.

Few used bookstores specialize in manga, but people trade in manga and other comics to them all the time. They will usually resell these for very cheap, maybe $4 a volume or less. These won’t be new manga, but if you are okay with the condition and price, it’s often worth the money. Used bookstores are the best way to find older titles that have been out of print for a while. Some used bookstores will only have what is sold directly to them locally, but other larger ones may have ways of getting more used manga from out of the area. Remainder bookstores may also have manga for very cheap as long as you don’t mind a black mark on the side.

If you don’t happen to live near a used bookstore, many bookstores will have some way of selling books on the internet, too. Alibris.com is one place where you can browse a selection of sellers for cheap manga. With shipping, it may cost a bit more than a brick and mortar used store, but the prices are usually still good and it’s a way to look out of state when you can’t actually get out of the area.

Ah, the local comic book shops… every Wednesday you can find a stream of people buying new comics, but what most of these people are not buying is manga. Despite this, manga are still comics and most comic shops will carry some manga. Since few people go to comic shops specifically for manga, it can sell at a snail’s pace in some shops, the upside being that very often rare volumes can be found on their shelves. Comic book shops are more likely to be sources for finding rare volumes than volumes for cheap, but keep in mind: sometimes MSRP is the cheapest price for rare manga.

Comic shops are special for other reasons too. First, almost every shop is unique. There are very few chain comic book stores, and the few that do exist are still usually local to a specific area. This makes each worth checking, as whatever random policy one has for keeping manga may be different than another, even one nearby. Comic book shops are also everywhere. Simply check Google if you are traveling to a new area, or visiting a relative. There’s sure to be a unique shop near them.

Secondly, comic book shops communicate with each other. If you try to request a specific volume, most shops will first check their system and supplier. If that fails, many will talk with other shops, and they may just be able to get that hard to find, mid-series volume!

And thirdly: some of the larger, privately owned comic book shops may buy dirt cheap overstock from other stores, and pass the savings on to you! I have found two comic shops that do this, and from both of them I have gotten complete series at ridiculously low prices. A lot of these are new, too.

Some of my comic book shop hard to find volumes include: Swallowing the Earth, Phoenix volume 5, and Emma volume 8.

Now, I don’t necessarily mean to buy manga here. A few libraries will sell used books, but most of them have moved to selling used books online. But what libraries are great for is test-driving manga. Rather then buying a series blind, borrow it first! If something caught your eye but you are not ready to commit, borrow it! Sometimes you will find that it is worth your money, other times not. Either way, you know before you spend your money.

There are many different ways to utilize friends when it comes to manga. Odds are that you can be used by them in turn.

First, there is trading. Sometimes you will discover that you have a series that a friend wants, and a simple trade can be made. Many of the series on my shelf are the result of trades. Not only does this net you new manga, it helps you clear out series that you are finished with. Alternatively, a lot of friends will also sell each other manga instead of trading. So always check out your friends’ sell piles!

Secondly, you can use friends to search for rare manga for you. If they live in another part of the country, they will have access to different used book stores and comic book stores. Just because a volume is not available in your area does not mean it’s not available anywhere. As long as your friend pays you or trades you back for the volume, it can be an easy way for both involved to get manga. This is a great means for extending tips 1 and 2 through other people, both for their sake and yours.

It’s certainly easy to find manga online. I’ve already mentioned alibris.com, a site I use fairly often, and I’ve used eBay as well. Yes, some people on eBay will ask for ridiculous prices for manga, but it’s possible to find perfectly reasonable deals there, too. Searching for “manga lot” and “manga complete” can bring up a lot of search results. Don’t forget that you can also exclude search words on eBay by adding a minus sign before the word.

The internet also provides book trading sites. Paperbackswap.com is good source for all books (not just manga). Mangatude.com is specifically tailored to manga trading, though you will find anime and other related merchandise and games there as well. Mangatude will let you advertise the manga you want to trade for free and create a wishlist for others looking to trade with you.

Sites I like buying new manga from include rightstuf.com, which regularly has studio sales, saving you up to 40% off manga; amazon.com, which has a price guarantee if they lower their price before the book comes out; and bookdepository.com, a UK based company with free shipping worldwide! Being based in Europe, The Book Depository will often have French and German manga as well, and if you live in North America like I do, Book Depository is likely to be the cheapest way to get European manga.

Conventions can be great fun for other reasons too, but a dealer’s room is always one of my favorite aspects of a convention. Manga is cheap and plentiful, and I have snatched up multiple complete series for at least 50% off! While many booths will charge full MSRP for anime, few, if any, will charge more than 80% of a manga’s price. Waiting until the last day can bring down the booths who were only selling 20% off, but it is not recommended to wait for any booth already selling 50% off or more. These booths are unlikely to discount any further, and much of their selection may be gone by the end of the con.

You can also meet people and make friends at conventions, furthering what you can accomplish using friends!

Some complete series I have gotten at conventions for 50% or more off the original price include: Kurogane (Kei Toume), Tower of the Future, Oyayubihime Infinity, Moon Child, and Me and the Devil Blues.

This may not get you manga for cheap, but it can help expand your collection nonetheless. Odds are that some of you may know how to speak or read another language, perhaps not as fluently as your primary language, but enough to read and enjoy manga. Japanese is going to be the obvious motherload of manga, but there are wide selections of manga available in (especially) English, German, and French. As I’ve already said, The Book Depository is a great source for you to find manga in your secondary language, delivered to your door for a decent price. And most English speakers are unaware, but Chuang Yi, a Singapore-based company, publishes manga in both English and simplified Chinese.

Selection also varies widely between countries. You can buy some titles in any language, but others only in one. Some countries may also be further along in publishing a specific series. If a US manga publisher has shut down or canceled certain series, their incomplete titles may have been finished in another language. For example, Aria finished publishing in Germany, but was only published to the halfway point in English. If you really can’t find that one hard to find volume, it might be easy to find in another language. As a result, your set may be mismatched, but at least it can be completed!

Check out C.J.’s collection in the August edition of Show Us Your Stuff.