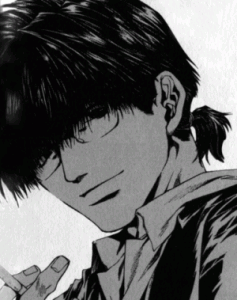 Sadly, it’s time to bid farewell to the Wild Adapter MMF. But we’re not going down without a few final submissions!

First up is Jason S. Yadao at the Honolulu Star Advertiser, who writes in his Otaku Ohana column about his decision several years ago to pass on Wild Adapter and his newfound regard for the series. “It’s definitely worth tracking down, though. Take it from the guy who took four years to get it—both in the “have them physically in my hands” sense and the “ahhh, now I understand what the appeal is” sense.”

At my blog, Soliloquy in Blue, Melinda and I devote our monthly Let’s Get Visual column to Wild Adapter, specifically the tricks Minekura uses to control access to Kubota’s thoughts and to create a snug and private moment for her characters to inhabit.

Justin Stroman reviews the first two volumes of the series for Organization Anti Social Geniuses. He didn’t care much for the prologue aspect of volume one (I believe his exact words are “meh”), but the characters and pacing won him over in volume two.

Lastly, Anna at Manga Report provides the second Saiyuki reread post of the Feast (though she has reviewed Wild Adapter in the past), and compliments several aspects of Minekura’s storytelling that also apply to Wild Adapter. She also notes, “I’m not even sure if this manga ever actually ended, because it seems to spawn any number of sequel and prequel series. But the point of Saiyuki is the journey, not the destination.”

MICHELLE: A lot of good stuff there, eh, Melinda?

MELINDA: Yes, there really is. I’m especially pleased to see some participation from readers who are new to the series here at the end. If there’s one outcome I’d hope for from all this, it would be that a few more readers might spend some time reading this month’s contributions and take a chance on the series themselves.

MICHELLE: That would be nice! Lousy series generally don’t get chosen for the MMF, after all.

MELINDA: Indeed! Many thanks to everyone who participated in this month’s Feast, especially our battle robot cohort David Welsh, who went over and above this past week on behalf of Wild Adapter.

And speaking of both David and non-lousy series, shall we take a moment to introduce next month’s Feast?

MICHELLE: Let’s do. David will be hosting a Fruits Basket MMF at his blog, Manga Curmudgeon, the week of July 24-30. Fruits Basket is a series that requires little introduction, but it has the distinction of being something that’s both very popular and very good. If you’re interested in participating, watch David’s blog for announcements!

MELINDA: Aaaaand, that’s a wrap! Thanks, everyone!

The complete archive of the Wild Adapter MMF can be found here.