Jia Li is in second grade and enjoys ballet, singing, and jumping on her trampoline. Her favorite subject in school is science and she also enjoys playing the piano and violin. She would like to grow up to be a veterinarian, a teacher or a star. This is her first book review. 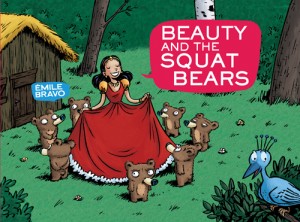 Beauty and the Squat Bears | By Émile Bravo | Published by Yen Press – There is a princess named Snow White who is getting chased by her step mother because Snow White is the prettiest princess in the world and the stepmother would like to be the prettiest. Snow White finds a house in the woods but it is the house of seven bears. The bears come home and Snow White begs them to stay. They ask her if she will do chores but she says she does not do chores and that princesses are supposed to marry a prince. So the bears have a talk, and one of the bears goes out to find her a prince.

While the three are on the way to see the princess they come across another character who claims to be a prince but looks like a monster. As the bear and three princes are talking, an old woman comes out of the wood. They tell her she’s too ugly to kiss the monster to turn him back into a prince when suddenly the old lady goes *poof* and becomes the fairy godmother. The monster grabs a kiss from the fairy godmother and turns back into a prince. The fairy godmother gets angry and a very bad thing happens. In the end, the bear comes home empty handed, Snow White has to do chores, and the stepmother gets her wish.

I liked the story and it is very funny. I like princesses and fairy godmothers, and the bears are very cute and say funny things. The funniest part was when the bear walks into the ball, Cinderella’s clothes turn back into rags in front of the prince, and then he walks out with the squat bear. I did not like the sad ending. I also did not think that it should have ended there. I would have liked there to be more to the story.

I liked the detail of the artwork, especially the dresses. I did not like some of the bears’ expressions. They seemed strange to me.

I really liked this book. I would recommend this book to kids who like princes and princesses and tiny, cute bears but who also can read big words.

Review copy provided by the publisher. For a grownup look at Beauty and the Squat Bears, check out Kate’s review here.

Jia Li is in third grade and enjoys singing and jumping on her trampoline. Her favorite subject in school is science. She is also on a competition cheer team and loves tumbling. She would like to grow up to be a veterinarian, a teacher or a star.