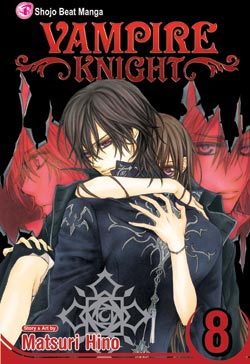 Cross Academy is divided into two groups of students: the Day Class, made up of seemingly normal high school students, and the Night Class, whose members are actually vampires. Protecting the human students from the vampires are Yuki Cross (the headmaster’s foster daughter) and her childhood friend, Zero Kiryu. Yuki has always had a strange relationship with the head of the Night Class, Kaname, on whom she must rely to explain the mysteries of her past. Fortunately for Yuki, circumstances have reached a point where Kaname has no other choice but to do so.

I read the first three volumes of this series when they first came out in the U.S., but eventually dropped it. While I found the main plotline interesting and liked Yuki and Zero, I found Kaname to be extremely creepy and his relationship with Yuki even more so. The real deal breaker for me, however, was that the entire cast (excepting Zero) behaved as if Yuki was one of Kaname’s personal possessions. Having now read this volume, there is virtually nothing I can say on this topic that would not be considered a major spoiler, but suffice it to say that the story itself now appears to support this view of Yuki. Not only has Kaname been firmly established as a love interest, but we also learn that Yuki was literally created purely for the purpose of being Kaname’s bride. There are other plot elements that briefly appear–the mythology of the vampire hunters and the dangers of twin hunters, for instance–but these items are clearly secondary.

In addition to giving life to the creepiest implications of the story’s core premise, the overall quality of the series seems to have declined. In early volumes, I recall that Yuki had quite a bit to do. In this volume, she literally does nothing but run around in a nightgown. In addition, Zero does nothing but point his gun and angst. Only Kaname has anything of real substance on his plate, which unfortunately consists of obsessing over Yuki and seeking revenge. Had I not read previous volumes, I would wonder if Hino’s characters were capable of anything but angst (alternately tragic and angry), aside from some supporting characters, whose range extends to ominous, mysterious, and tragic.

The series’ art has also suffered a serious decline. In the past, I’ve found Matsuri Hino’s art to be too cluttered for my taste–more focused on looking pretty than storytelling–but her designs and backgrounds were interesting and appealing, and her art very detailed. Unfortunately, she has degenerated to substituting backgrounds with white space or hazy textures and her characters have become so generic that they are difficult to tell apart except by hairstyle.

I decided to give Vampire Knight another try thanks to a growing fondness for other gothic shojo titles over the last two years. Unfortunately, whatever it is that CLAMP, Higuri You and Kaori Yuki have, Matsuri Hino doesn’t.