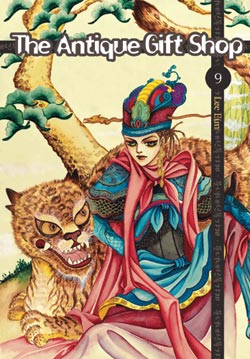 Bun-Nyuh, who still hates the supernatural world and tries to pretend it isn’t a part of her life, thinks to finally free herself from it by closing her shop and dumping the remainder of her grandmother’s antiques, all touched by the supernatural, in the river. This, of course, does not have the desired effect. Before we can get to that, however, we must first wrap up Lee Eun’s skewed version of “The Little Mermaid,” which began in the previous volume and features a rather self-centered mermaid convinced that the fairy tale got things completely wrong and that she must rescue her prince from life with his obese girlfriend (who is a former ballerina).

I confess that I ended up not caring much for the mermaid plotline, at least partly because I couldn’t follow much of it. I’m not sure who pulled who from the river, who found who in the river, or, for that matter, if anyone even lived. I also have no idea if the prince grew a spine, the mermaid finally thought about someone besides herself, or if the ballerina regained her self esteem. All three, I think, were meant to reflect various parts of Bun-Nyuh’s personality, but the conclusion of that arc was too confusing for it to really work for me.

In contrast, the return to Bun-Nyuh’s story is the series at its best, with the creepy atmosphere combined with Bun-Nyuh’s zany temper and insistence on barging ahead with whatever she wants to do. Having deprived herself of both Mr. Yang’s protection and the presumed protection of her grandmother’s antiques, Bun-Nyuh is now at the mercy of the force they’ve been protecting her from the entire series. Instead of a threatening villain or scary monster, however, what she encounters is a strange young man who claims to be a childhood friend she doesn’t remember, revealing many things about her half-remembered nightmares and recollections throughout the series.

Lee Eun’s characters always look a little unfinished to me, their faces often seeming to have only the barest of features (an odd criticism of manhwa art, I know) and the bodies just short of elongated. This, however, is very well suited to the spooky atmosphere she creates and her depiction of the supernatural elements is often stunning. In this volume, the scenes in which Bun-Nyuh seeks to avoid being alone in the rain and the scenes where she imagines Mr. Yang is with her (Or maybe he was–I never trust those things unless he actually confirms them) are particularly effective.

This is not a particularly well known manhwa, not really fitting the mold for what seems to create licensing hits, but it is one of my favorites, and I’ll be sad to see it go when it wraps up in the next volume. Hopefully Yen, or another studio, will license another of Lee Eun’s works soon.