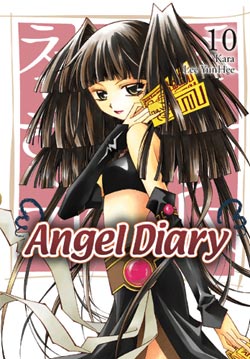 This volume concludes the conflict between Dong-Young, Bi-Wal, and Bi-Wal’s brother Ryung (who would be the King of Hell were it not for his white hair). I have read all the licensed series from this manhwaga team (the others being Demon Diary and Legend>) and Angel Diary is my favorite of the three, but I haven’t enjoyed the most recent volumes as much as I did the previous. I signed up for the story of the crossdressing Princess of Heaven who is hiding out on Earth to escape marriage to the King of Hell, her mysterious admirer, and all the otherworldly shenanigans that surround them. Recently, it’s been delivering less on that and more on “he’s not really an evil villain, he just does bad things due to an angsty past!” Unfortunately “he’s only bad because of his angst” characters tend to not work for me.

This volume seems to bring an end to that, however, returning the focus to the series’ more interesting characters. Namely Dong-Young, Bi-Wal, their friends, and Queen Hong. This volume has some real highlights, particularly Dong-Young’s rather ill-timed explanation of her relationship with Bi-Wal, and her rather limited idea of what a relationship between brothers should be like. I was annoyed, though, at the regular reminders that she isn’t very smart. Still, I like my love confessions in fiction to occur in the middle of battle and I’m glad that the series is letting her rescue both Bi-Wal and Doh-Hyun in battle. Bi-Wal also finally seems to be returning to his old outgoing and clever self, hopefully putting aside his more recent “silent, angsty, and inscrutable” act. Hopefully, the next volume will have more of the charm of earlier volumes, and will fully return the focus to the story’s principal characters.

Kara’s art, I suspect, leans a bit too close to the standard “cute” shoujo style, but I’ve always been fond of it, big eyes, pointy chins and all. Their (Kara is actually a team of two artists) lines tend to be clean, their character designs distinctive, and the layouts are easy to follow. It is, I think, very well suited to what is essentially a very fluffy approach to an epic, mythic romance.

Angel Diary may not be for everyone. It’s very lighthearted for a story about star-crossed love between the Princess of Heaven and the King of Hell, and rarely focuses on romance as much as one would expect for the setup. It also avoids falling into the territory of being a light comedy, and the seemingly conventional takes on genderbending mask rather unconventional roots. It’s always been right up my alley.