This month, we take a look at three offerings from Digital Manga Publishing’s Juné imprint, No Touching at All, volume one of Treasure, and volume two of The Tyrant Falls in Love, as well as BLU Manga’s You & Me, ETC.. 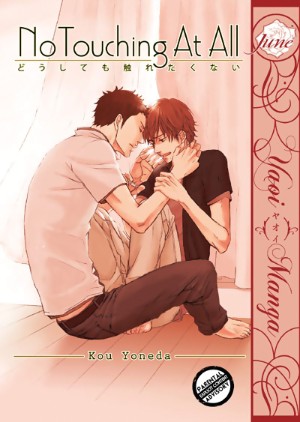 No Touching At All | By Kou Yoneda | Published by Juné | Rated Mature (18+) | Buy at Akadot – The chief characteristic of No Touching At All is one that simultaneously boosts and deflates my enthusiasm for this well-done one-shot—it reminds me a lot of Future Lovers. Now, on the one hand, this is high praise, because Future Lovers is one of the best BL series I have ever read. On the other hand, being compared to something so awesome makes the very few complaints I have about No Touching At All stand out more than they ordinarily would.

Toshiaki Shima is awfully serious for a 26-year-old. When he reports to his new job and discovers that the stinky drunk he met in the elevator is his boss, Togawa, he’s less than enthused. Togawa is pretty insistent on getting to know his new employee, though, and somehow, after an evening out, the two end up in bed. Afterwards, Shima is upset. “I never learn,” he laments.

It turns out that Shima resigned from his previous job because the straight coworker with whom he’d been having an affair began to lob accusations of sexual harrassment towards Shima in order to save face. Shima’s tortured by that experience, and even when Togawa tells him quite plainly that his feelings have grown into love, Shima can’t believe it. Early in their relationship, Togawa expressed a desire for a family, and this conversation dogs Shima throughout the volume, making him certain that soon Togawa will tire of him and cast him aside.

This is similar to the plight facing the two leads in Future Lovers, but I think the constant reiteration of the theme here gets a bit repetitive. Both characters are very well-developed, so it’s not hard to sympathize with Shima, prickly and awkward though he may be, but man, that guy can angst!

I do like that the resolution to the story is satisfying, even though the couple’s problems haven’t been tied up in a neat little bow. This is something they’re going to have to deal with, and if there was ever a BL story I wanted a sequel to, this is it! In fact, even though I read an online review copy furnished by the publisher, I liked this so well that I plan to shell out my own hard-earned cash for a print copy when it gets released.

So, no. It’s no Future Lovers. But it is a story of two professional adults trying to have a relationship while dealing with their own personal baggage, a recipe for the very best kind of BL. Highly recommended. 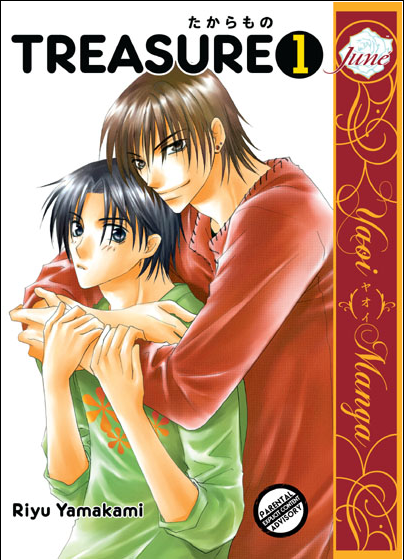 Treasure, vol.1 | By Riyu Yamakami | Published by Juné | Rated YA (16+) | Buy at Akadot – Raised by his grandmother in a remote island village, teenaged Naoyuki is shipped off to the big city to live with relatives who can help give him “a broader perspective on things.” And though a “broader perspective” is indeed what Naoyuki receives, it’s probably safe to say that being coerced into exchanging sexual favors for tutoring wasn’t what grandma had in mind.

The “tutor,” Naoyuki’s older cousin Satoshi, is a tall, gorgeous bully, who loves to mock Naoyuki for his country-bumpkin ways nearly as much as he loves to bone him. And if you think I’ve had my fill of emotionally abusive, semi-incestuous love interests, you wouldn’t be wrong.

Mangaka Riyu Yamakimi pushes the envelope here by providing Naoyuki with a possessive lech both at home and at school, where Naoyuki meets sweet-faced Seitaro, who’s so determined to make “Nao” his, he follows him all around the school grounds, screeching things like, “What can I do to make you love me?”

With two such charming men in pursuit, is it any wonder that Naoyuki ends up passed out in the nurse’s office just a few weeks into school?

The story’s one saving grace is its protagonist, Naoyuki, who isn’t afraid to jump out of a second-story window to evade an unwanted suitor, or to punch out a roomful of would-be gang-rapists. And though it’s undeniably disappointing to watch him trudge down the well-worn path of BL heroes who fall in love with their harrassers, at least he gets in a few good swings on the way.

Yamakimi’s artwork is simple, but surprisingly effective, conveying a level of darkness that one might otherwise think she was entirely unaware of. If only she’d been willing to embrace that a bit further, what reads now as “disturbing romance” might have graduated to just “disturbing,” which would be a marked improvement in my book. 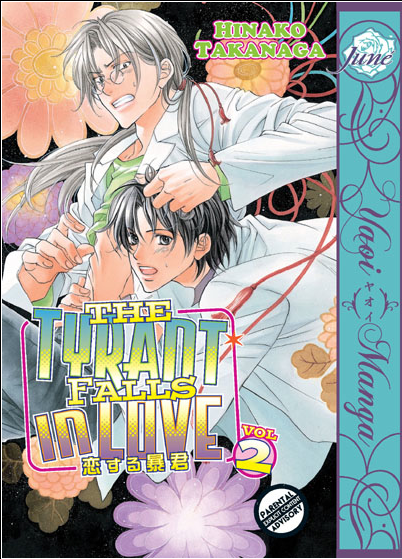 The Tyrant Falls in Love, vol. 2 | By Hinako Takanaga | Published by Juné | Rated Mature (18+) | Buy at Akadot – This volume opens two months after the end of the last, with absolutely nothing of a sexual nature having occurred between Morinaga and his tyrant in that time. Finally reaching critical desperation, Morinaga jumps Tatsumi in the lab, only to discover that Tatsumi’s been waiting to see how long it would take him in order to determine the frequency of their future encounters.

While the ensuing bout of haggling could easily read as just plain crass, Hinako Takanaga’s sharp sense of humor keeps the banter running smoothly and hilariously. The volume then takes a serious turn, as Morinaga’s estranged family launches a campaign to bring him back home for his older brother’s wedding, despite their continued refusal to accept his sexuality.

Man, I hate to admit that I’m wrong, but at least with manga, there’s a bright side to it all. After my overall dismay with this series’ first volume, nothing could possibly have surprised me more than my sincere enjoyment of the second. Though the series still wades into the murky waters of nonconsensual sex, this time, the main characters’ intimate history and visible affection really steal the show, even during the story’s roughest moments. While this dynamic was certainly present in volume one, it wasn’t quite enough to cover for its unfortunate romantic trajectory. But even with that damage already done, Takanaga’s wonderfully rich characterization is enough to rescue the series.

Morinaga is more genuinely relatable in this volume, still ruled by his sexual urges but revealing some real thoughtfulness about his own feelings, particularly when confronted by a painful memory from the past. It’s Tatsumi who really shines here, though, finally letting some of his own feelings show, at least enough so that even a cranky, jaded reader like me might actually believe he loves Morinaga.

Despite the series’ over-the-top sensibility, there’s a real subtlety to Takanaga’s storytelling that displays some pretty powerful craft behind the flailing. Her artwork, too, is especially expressive here, even in the throwaway side story at the end of the book.

There’s no doubt that The Tyrant Falls in Love was one of 2010’s most eagerly-anticipated English-language BL releases. It’s nice to finally be able to understand why. 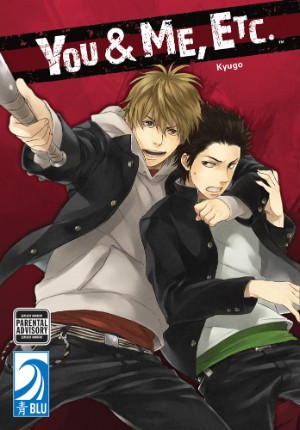 You & Me, Etc. | By Kyugo | Published by BLU Manga | Rated Mature (18+) | Buy at Amazon – It can be hard to know what to expect with a collection of boys’ love short stories. Sometimes all are unappealing—the tales in Hinako Takanaga’s A Capable Man come to mind—but more often they’re a mixed bag. It’s much more rare for every story in a collection to actually be good, but You & Me, Etc. achieves this feat.

The collection is bookended by two stories about a pair of childhood friends, Keita Kanai and Iku Kirishima. They did everything together as they were growing up, including joining the junior high baseball team, but when Keita is injured in a car accident and can no longer play, guilt-ridden Iku gives up the game as well. Not only that, he distances himself from Keita and cultivates the air of a misanthropic loner. “Someday We…” recounts Keita’s efforts not to let their friendship slip away, and a dramatic scene in which he pleads for a return to closeness ultimately ends in a kiss. In the title story, the boys are unsure how to proceed from this moment, but end up working things out.

It sounds simple when described thusly, but there are plenty of moments that show how much the boys care for each other, and some amusing panels, as well. Two female characters play important roles—indeed, the first page features Keita’s girlfriend complaining that he doesn’t seem interested in making out with her—and I just generally love couples comprised of one seemingly surly guy and one more cheerful one. There’s a recurring theme of Iku showing rare vulnerability by clutching at Keita’s sleeve that’s nicely done, as well.

The other stories are equally as strong. “Cherry Blossom Pilgrimage” isn’t even a romance, though there are hints one could develop in time. Takahisa Sugaya is a ladies’ man, with plenty of girls but no real friends. He’s a bit of a slacker and is sure that upwardly mobile Yuu Fujishiro, generally considered to be the heir to the class presidency, would have nothing to do with someone like him. That is, until he discovers that Fujishiro is having a relationship with a male teacher. A genuine friendship develops between the boys, since Fujishiro doesn’t have to worry about appearing perfect when with Sugaya, and I would have liked to have read more about these two.

Indeed, that’s my one complaint—the stories end too quickly! Only the longest, the two-part “A Beautiful Tomorrow,” feels like it had enough time to develop. It’s the story of a famous writer who encounters the son of a former professor who has been cast out of his home by his step-mother after his father’s death. Their relationship builds slowly and naturally and, like the fellows in the title story, they’re never shown doing more than kissing. In fact, the volume earns its mature rating due to heterosexual content, not for the BL!

You & Me, Etc. was a very pleasant surprise. Kyugo doesn’t seem to have written too many original works, but her work is certainly impressive. I hope we see more of it soon!