Back from our pre-NYCC break, Michelle and I take some time to discuss recent releases from Viz Media, and Vertical, Inc, and Digital Manga Publishing.

I spend money on cons why?

MICHELLE: Actually, I’m kind of relieved I didn’t spend a bunch of money to go, given the paucity of new manga licenses, although I admit not getting to meet people as a result is a serious drawback.

MELINDA: Well, I think the company right here is pretty good. Though, as I gaze at my dinner of frozen pizza, I’ll admit that the food in New York was better.

In any case, with or without new manga licenses, we have plenty of current titles to discuss right here. Why don’t you start us off? 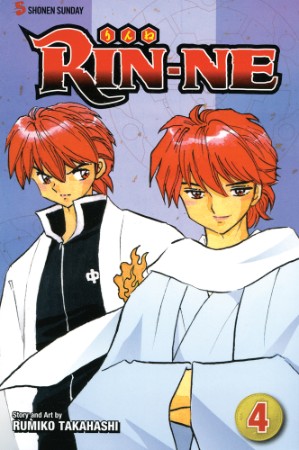 This week I got caught up with Rumiko Takahashi’s latest series, RIN-NE. I used to read each new chapter of this series online, but fell out of the habit, and had volumes three and four here demanding my attention. RIN-NE is an episodic supernatural comedy from the pages of Shonen Sunday and features Rinne Rokudo, a “sort of” shinigami whose chief character trait appears to be stinginess, and Sakura Mamiya, a human girl who can see spirits and who helps Rinne bring closure to those hanging around their school and send them off to the wheel of reincarnation.

Volume three introduces a new character, Tsubasa Jumonji. He’s an exorcist, though he seems to think all ghosts are evil, and immediately asks Sakura to go out with him. She’s not enthusiastic but doesn’t exactly reject him, either, which troubles Rinne. Even though he tells Sakura he has no interest in going out with anyone, he’s beginning to ponder what she means to him. For her part, Sakura is incredibly level-headed and calm, to the point where neither boy has any inkling what’s really going on in her head.

Still, Tsubasa becomes a part of the gang and the trio contends with the ghost of a boy who would like one fun date with the girl he liked before passing on, a toilet-haunting spirit, evil mechanical pencils, and Rinne’s mooching dad, who is the president of a damashigami (a corrupt shinigami who harvests the souls of those not yet destined to die) company and intends for Rinne to inherit. An incredibly over-the-top fight ensues, which I can’t fully describe except to say that it features a giant slab of wagyu beef and a mysterious stranger in a seal costume.

To look at RIN-NE objectively, I admit that this is quite a lot of wacky hijinks with very little payoff in terms of plot or character relationships. Still, it’s kind of… homey and pleasant, which is just what one needs sometimes. Plus, the tiny dribbles of romantic angst ensure that I’ll be coming back for more….