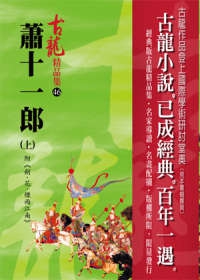 It is high time that I actually write a post about Gu Long, so here it is.

But First, the Story

Xiao has a reputation as a notorious bandit (even though nobody’s proven he committed any crime), and ends up rescuing Shen, who is The Most Beautiful Woman in the World (there are so many Most Beautiful Women in the World in wuxia fiction that it’s ridiculous – this gets lampshaded in Passionate Wastrel, Infatuated Hero where they keep a bloody list of the most beautiful women in the world, which Zhao Guan takes exception to). Xiao and Shen end up spending a few months together, and fall in love with other. Alas, Shen is already married, to a handsome, strong, skilled, rich, well-mannered young man no less. Oh, and she’s pregnant (with her husband’s child).

Anyway, Xiao has his own matters to deal with, being an outlaw and all. Eventually, Shen’s family is murdered and Xiao is accused. Things get pretty gnarly…

Now, I Talk about Gu Long

Gu Long, along with Jin Yong (discussed previously many times in this column) and Liang Yusheng (discussed here), is considered one of the three great writers of “new wuxia”. I actually prefer to call it “Cold War wuxia” since, you know, a new generation of wuxia writers has already emerged. Gu Long is also one of the four great (Cold War) wuxia writers of Taiwan, of which he is certainly the most popular.

What I respect about Gu Long is that he created his own personal style of wuxia, and was never content with his success – he always strove to push the wuxia genre and his own craft to the limit of his ability. As such, his works feel unique, both distinct from other wuxia writers, and distinct from each other.

I’m tempted to say that Gu Long’s works are ‘wuxia noir’, except his work is so diverse that I think that is too limiting.

Some people say that a picture is worth a thousand words. Right now, I think thousands of words are worth taking pictures of.

Here is a random page from The Bride with White Hair. 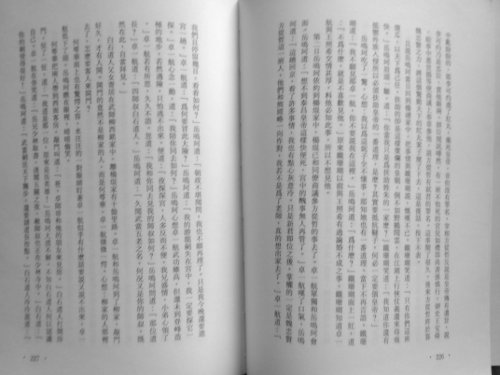 Those paragraphs are … well-sized. Actually, these paragraphs seem a bit shorter than average for Liang Yusheng – it’s not unusually for a paragraph to take up an entire page (yes, even in this big-page format). Furthermore, Liang Yusheng uses quite a range of vocabulary.

Here is a random page from a Jin Yong novel. 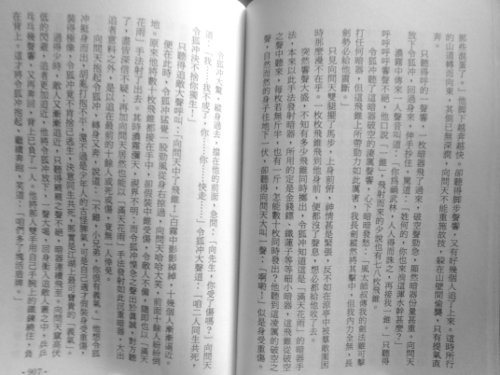 That is a wall of words alright. And not just any words – the vocabulary required to read this is significantly more advanced than needed to read Liang Yusheng. I reckon it took me about 90 hours to read Shè Diāo Yīngxióng Zhuàn. It’s not just non-native readers who think Jin Yong is hard – I’ve met Taiwanese people who claim they can’t read Jin Yong novels because it’s too hard (on the other hand, I’ve also seen 10-year-olds reading Jin Yong novels).

Now what about Gu Long? Here’s a random page: 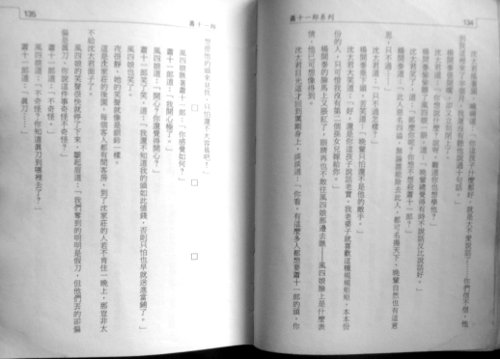 It’s heavy on dialogue, and even the non-dialogue paragraphs are awfully short, heck, most of the sentences are short too. It’s not just the paragraph/sentence length – the vocabulary is also much more basic. Granted, Gu Long occasionally uses pretty advanced vocabulary, but even so, when it comes to difficulty, he’s definitely not in the same league as Jin Yong or Liang Yusheng.

I think you now understand why some learners of Chinese interested in wuxia choose to start with Gu Long.

The fact that Gu Long chooses to write mostly dialogue and sentences which are much shorter than what is standard for Chinese literature (or even conversational Chinese) definitely affects the mood. Whereas Jin Yong will go into a loving digression about tea or something, Gu Long can be so brief it’s stark.

Ha, I could dedicate an entire post to this topic.

I partially agree with both sides.

I think Gu Long has earned reputation as a misogynist. No other wuxia writer I’m familiar with comes anywhere close to saying anything as vile as what Gu Long says about women in some of his works. To be fair, the most misogynist remarks are concentrated in the villains’ mouths, however the narrator and protagonists are also guilty, and even if it’s in the villain’s mouth, it’s not much fun to read.

Now, I don’t think there is any respect in which one could claim that Gu Long writes better female characters or is more gender-egalitarian than Zheng Feng or Liang Yusheng. There are certain respects in which I think Gu Long handles female characters in a more egalitarian manner than Jin Yong or certain other wuxia writers … but in my opinion, this is more than outweighed by the misogynist bile that Gu Long sometimes pours out. It’s my impression that a much higher percentage of Jin Yong fans than Gu Long fans are female, and I think it’s because that it’s because, overall, Jin Yong is simply friendlier to a female audience.

But it’s not the sexism which most bothers me about Gu Long. It’s the gender-rigidity. Like I said, Gu Long’s works have quite a bit of variety, and some of his works are much less misogynist than others. However, everything I’ve read by him is full of statements like “All men do X because they are men” and “Women always do X. Otherwise, they would feel bad.” First of all, this erases anybody who doesn’t conform to the gender binary While I wouldn’t call Jin Yong or Liang Yusheng champions of gender diversity, they do have some characters who are not cis-gendered. But even among cis-people, there is greater differences between people of the same gender than there are between different genders. While I think there are biological between the sexes, I think gender is a social construct, and that most of the “differences” between female and male are driven by society, not biology. I strongly take exception to Gu Long’s policing of gender roles, which is far more stringent than any other writer I’ve encountered in Chinese.

I will give credit to Gu Long for offering his characters more flexibility vis-a-vis gender in Happy Heroes (which was translated into French as Les quatre brigand du Huabei), but that seems to be the exception, not the rule, for Gu Long.

Why is Gu Long more wretched than his Chinese-speaking precedents and contemporaries? I can’t definitely answer that question … but remember how I mentioned that he was strongly influenced by foreign literature? Among other things, he was influenced by the James Bond novels … and one of the lines in The Spy Who Loved Me is (trigger warning) “All women love semi-rape. They love to be taken.”

Gu Long, to his credit, has written with sensitivity at least one female character who had experienced rape, and has never managed to make a statement quite that terrible. Nonetheless, he is the only wuxia writer I know who I could ever imagine saying anything like that. Overall, his gender-policing seems to be derived much more from European and American writers than Chinese writers.

Women in The Eleventh Son

Fortunately, The Eleventh Son is quite tolerable when it comes to gender, at least by Gu Long standards. Shen, as The Most Beautiful Woman in the World, could have easily just been a fantasy object, but she’s a fully realized character with a vibrant inner life. She tries to figure why she is not in love with her fantastic husband, she is very attached to her birth family and visits them regularly, she isn’t sure how to deal with Xiao, etc. In fact, she has so much going on that she hardly has brain space left to think about her pregnancy.

Shen’s also not always a helpless victim – she has mastered a bad-ass martial art technique courtesy of her family (and thus is heavily tied up with her feelings about her family), and ends up rescuing Xiao more than once. Eventually, she is the one who decides how to resolve the love triangle between Xiao, her husband, and herself.

Additionally, another female character ends up starting a successful new romance in her mid-to-late thirties (I don’t remember her exact age).

This novel has been published in English. 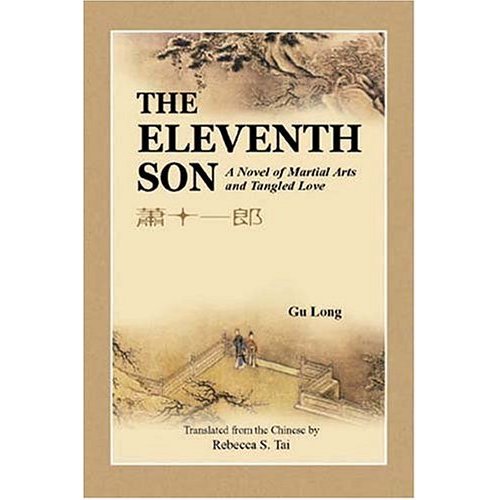 Ha, I bet you weren’t expecting that!

I haven’t read the translation myself, but the reviews I’ve read claim that it’s excellent.

I actually discussed Gu Long more than this novel specifically, didn’t I? That’s probably because I think this is less interesting than the other Gu Long novels I’ve read. It’s not that it’s a bad novel – it’s fast-moving and I got involved in the story and all – it’s just that I can’t think of much to say about it.

If you can read French, I recommend Les quatre brigands du Huabei (my favorite Gu Long novel so far) over this one. In fact, if The Eleventh Son hadn’t been translated into English, I would have probably chosen to write a post about Happy Heroes/Les quatre brigands du Huabei instead. However, if you can’t read French/Chinese/etc., then I actually highly recommend reading this novel. Gu Long is one of the most influential writers of the 20th century, and this is quite different from anything I’ve read in English. Most importantly, it is a fun read.

Sara K. sometimes wonders why she spends so my effort reading, watching, and writing about stuff in Chinese. After all, the global economy is speeding head-first into another crisis, the too-big-to-fail-banks and other oligarchical/monopolistic corporations have murdered democracy in the United States (and other countries), and if we don’t make radical changes right now, climate change will kill off at least 90% of the human population within 30 years. Shouldn’t she be spending her energy dealing with these issues instead? However, she also thinks that the power of popular culture is underestimated, and needs to be examined.