Those of you who have been reading this website for a long time have probably realized by now that I tend to gravitate towards things I like. Sure, I’ll indulge in a rant now and then, but overall, I’m just a lot more likely to spend time composing picture-filled essays on why you should read something rather than why you shouldn’t.

It’s easy to identify the stuff I love, because you’ll find lots of rapturous material about it. I love classic shoujo like Moon Child, Banana Fish, and Please Save My Earth. I love shounen epics like Hikaru no Go and Fullmetal Alchemist. I love plotty BL like Wild Adapter and One Thousand and One Nights. I love Fumi Yoshinaga. I love CLAMP. I love NANA. And I love to talk about all these things (and more!), because I honestly just can’t get enough of them.

A while back, Noah Berlatsky asked me if I’d consider participating in the Hooded Utilitarian’s fifth anniversary festival of hate, and at first I thought I simply could not do it. Despite my occasional ranting, I didn’t think I had it in me to spend real time with anything I hated enough (or even close to enough) to qualify for such an organized effort. After all, this is something I’ve tried hard to avoid.

Then I remembered Kim Dong Hwa’s Color trilogy. Back when I hosted its Manga Moveable Feast, I worked hard to keep my feelings about the series confined to my own posts, so that I could be sure to give enough room to those who were truly fans. Even then, I know there were those who felt I failed—and maybe I did—but I really did make an effort to contain my own feelings of negativity towards the subject so as to encourage opinions from all sides.

Now, though? I don’t have to. I’m free now to hate the Color trilogy with all my heart and soul. And behold…

The Color of Hate.

I hope you’ll join me there, whether you hate along with me or not. 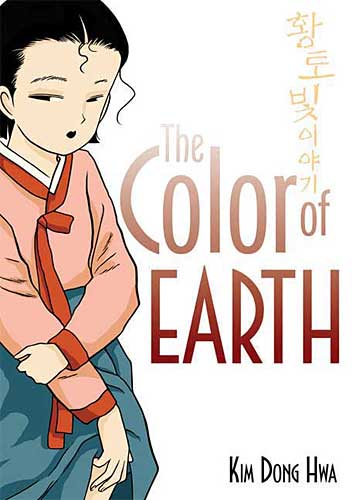 At Manga Bookshelf’s Off the Shelf, Michelle Smith and I discuss Kim Dong Hwa’s Color trilogy (The Color of Earth, The Color of Water, and he Color of Heaven) published in English by First Second. Here’s an excerpt from the discussion:

MELINDA: Let’s get right to the meat of things. There’s been a lot of discussion among critics about whether or not this series is inherently sexist. Michelle, I’d like to start with bringing up a statement you made in your recent review of The Color of Heaven:

“I know that the limited scope of life for a woman in this time and place is historically accurate, and that for a mother to say, “There is nothing better in life than getting married” reflects a period where marriage provided the ultimate in protection for a woman … To be honest, I think a large part of my ire is due to the fact that The Color Trilogy is written by a man. If a woman wrote these things, I’d still be annoyed, but coming from a male author I can’t help but read such statements as downright condescending. Try as I might to view these attitudes through a historical lens, I’m simply unable to get over my knee-jerk reaction.”

First of all, I wouldn’t characterize your reaction as knee-jerk at all. I think what you’re reacting to (and I mentioned this in comments, but I’ll reiterate it here) is not the story’s historical context, but the author’s own sexism which he reveals in the way he portrays the realities of the period. My immediate thought upon finishing the series was that I found it inexpressibly sad. Ehwa’s mother spends almost the entire series teaching her daughter about what a woman’s life is in their world and helping her learn how to endure a lifetime of waiting and heartache that can only be relieved by the companionship of a beloved man. And I suspect there is quite a bit of historical accuracy in this sense of utter helplessness and lack of worth placed on a single woman in that period.