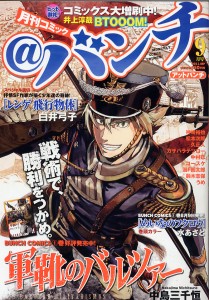 If you’ve read anything I’ve written about manga magazines, you know I love the obscure and unique. Not AX unique, “look at me, I’m so experimental! Penises!” unique. I like unique when it comes by it honestly. Authentic oddballity, if you will.  Fortuitous circumstance lead me, therefore, to Monthly Comic @Bunch.

Monthly Comic @Bunch is a relative newcomer to the comic scene. Replacing Weekly Comic Bunch, along with Monthly Comic Zenon, Monthly Comic @Bunch began publication in January 2011. There are no circulation numbers available yet, and Weekly Comic Bunch last posted data in 2008, with a monthly circulation of 182,672. At 650 yen ( $8.50 at time of writing) for about 670 pages, you’re getting a page per yen of action, adventure and a fair measure of screaming, for one reason or another.

Compared with other Seinen magazines, Monthly Comic @Bunch  feels very much as if the editorial staff’s main requirement is that the artists draw something they want to draw, as opposed to something that will sell. As a result, there’s no one cohesive thread in Bunch’s choices.  Explosion- and violence-filled “BTOOOM!” by Inoue Junya sits side by side with Mizu Asato’s children-and-animals story “Meina no Fukurou.”

What will probably strike a Western audience first is that few, if any, of the creators or stories’ names are known here. With the exception of some of the “Hokuto no Ken” (Fist of the North Star) stories, and Usamaru Furuya’s manga adaptation of Dazai Osamu’s No Longer Human, both of which ran in Weekly Comic Bunch,  Monthly Comic @Bunch is filled with talented artists and skilled storytelling that we’ll probably never see here in English.

Monthly Comic @Bunch does have a website, Web@Bunch, with samples of manga, both running currently, and website-only. The site includes messages from the creators, a blog, links to published collected volumes and the usual sort of functions on magazine websites.

The standout Monthly Comic @Bunch series for me are Nakajima Michitsune’s fantasy war story, “Gunka no Baltzar” set in a Napoleonic War-style setting, about a young man moving up through the ranks; police action/adventure story “Ouroboros” by Kanzaki Hiroya, and the story that dragged me here in the first place, “Avare Senki” by Nakamura Ching. Let me talk a little bit about this story, because in a world where Bakuman is being talked about so often, there needs to be an “Avare Senki.”

Bakuman is a fictionalized story about two young men trying to make it in the manga world, written and drawn by two men who have made it in the manga world. “Avare Senki” (which translates to something like “Stingy Wars” or maybe the “Battle of Cheeseparing,” or “Miserly Combat,”) is a story about the bone-crushing poverty and exhaustion endured by a manga artist and her assistants when she’s working steadily, but has not “made” it. Wrapped in a plot of working on a fantasy series called Avare Senki, Nakamura-sensei draws a sobering, but not entirely depressing, tale of deadlines, ramen, smoking and recycling materials. For people who want to really see behind the curtain of a manga artist’s life, forget Bakuman, and turn to “Avare Senki.” It will open your eyes, I assure you.

When compared with many Seinen magazines, there’s a refreshing lack of creepy fanservice here. The magazine feels quite manly overall, and there is a sense of edginess to it that pervades most of the pages, even if it eschews the most banal tropes of fanservice. This isn’t to say there is none – but when compared with many of the top Shounen magazines, this magazine is significantly more mature.

For fans of the obscure, the authentically edgy, Monthly Comic @Bunch, is a don’t-miss magazine.