Rooftop Prince is available for streaming on Hulu, Viki, and Dramafever.

ANNA: I just finished watching the first episode of Rooftop Prince and I’m not quite sure what to make of it. There were so many elements that were all over the place, it is difficult to summarize! 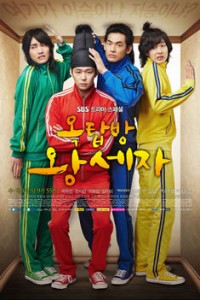 The Rooftop Prince, His Retainers, and Their Tracksuits

There are two parallel stories set hundreds of years apart, cast with the same actors. Is everybody time traveling, or are we looking at some odd cases of reincarnation?

In the present day, Se Na reacts badly when her mother remarries, providing her with a new sister, Park Ha. Se Na torments her little sister, and eventually causes her to become lost. Park Ha grows up in the United States with no memory of her previous family. She finds out that her father was looking for her and travels back to Korea in time to attend his funeral. She’s reunited with her stepmother and evil older stepsister.

The two sisters also exist in the past, with the older one about to be passed over as a candidate for crown princess in favor of the younger one. A horrible accident (or was it?) results in the younger sister being scarred. The older sister becomes crown princess. The crown prince Lee Gak is extremely charming and light-hearted, but when he wakes up to find that his princess has drowned in the middle of the night, he becomes overcome with grief. Determined to find out the truth behind his wife’s death, he puts together an investigative supergroup consisting of a scholar, warrior, and a fabulously fashionable eunuch.

In the present, a rich young man named Tae Yong who closely resembles the crown prince notices Park Ha, but he doesn’t ask her out. He’s betrayed by his cousin and drowns. Two years later, the crown prince and his retainers show up in Park Ha’s apartment. I think I’ve covered everything! What were your thoughts on the first episode?

EVA: You guys promised me a comedy! What the heck, man. The older sister isn’t funny, she’s evil! Awesomely evil, true, but still. Not a comedy!

In all seriousness, though, episode one is full of all the reasons why I usually give a series three chances before committing myself. It is clunky, disjointed, and not at all funny. Because the two storylines, one taking place in the Joseon era and the other in modern day, jump back and forth with no explanation, it’s hard to know if we’re dealing with a case of reincarnation or of doppelgangers. All I know for sure is, if it hadn’t been for the last scene where the prince and his retainers appear in the rooftop apartment after being sucked through a lunar eclipse after fleeing from Korean ninjas (that’s right, Korean ninjas), I’d have thought this show was going to be a straight up mystery. 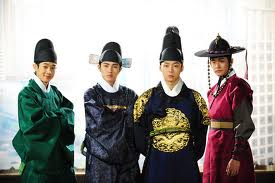 ANNA: I agree that the first episode was a bit confusing. I had no idea what to make of the doppelgangers, and the storylines seemed to tilt towards the tragic with all the bullying and death going on. The sudden switch of tone towards the end of the first episode where the prince forms his supergroup of retainers made me hope for much better things for the second episode, and I found myself liking it much better.

EMILY: Episode 1 was a lot more serious than the plot description I’d originally read of the series, but it is obvious that the whole episode is intended as set up for the hijinks to ensue later. The episode bounces back and forth between the story of a Joseon King, his beautiful Crown Princess, her scarred sister, and the story of modern reincarnations of the same people. Or are they reincarnations? There are a lot of questions and mysteries set up in the first episode. There are also two murder mysteries being set up. One in the past and one in the present. But they both have interesting twists. In the past, we aren’t entirely certain who the victim is, though it’s pretty much assumed to be the Crown Princess. Also, we don’t know who the killer is, though one piece of evidence points to an unlikely suspect. As for the accidental murder in the present, we know who the culprit is, but we aren’t entirely sure the victim is dead and not doing some sort of time-travel thing instead. You never know.

I enjoyed the first episode, and didn’t have any problems following the intertwined plots. I think Micky Yoochun is doing a great job in his role of the time-jumping King. His acting is a lot more animated than I’ve seen it in past dramas, and he sounds very funny with his historical accent (er, not that I’m one to judge Korean accents). I also must say, Micky looks fantastic in historical garb. He should stick to historical dramas forever and ever. Or at least, always wear that hat. I can see it now—Micky in some drama playing a lawyer, but wearing the historical hat. It would be awesome, I tell you.

Episode 2 promises to be very silly :) 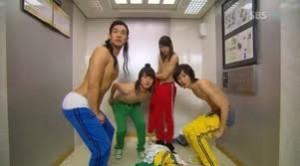 Is it an elevator or a changing room? The modern world is so confusing!

ANNA: What did people think of episode 2? I liked the way it focused on the main thing I enjoyed in the first episode, the Joseon King and his merry band of sidekicks. Putting them in different colored tracksuits for modern dress was inspired, and there were so many funny moments when they were trying to learn how to survive in the modern world.

EVA: Well, I both enjoyed it and didn’t enjoy it. I loved the track suits and hated the slapstick. (I have a very low tolerance for slapstick.) I loved the hate/hate relationship that forms between Lee Gak and Park Ha, but hated how long it took Lee Gak to figure out that he has traveled through time. And, man, is Park Ha’s sister evil. Eeeeeeevil.

Here’s the thing: I know it sounds like I’m doing nothing but whine and complain about this show, but I’m actually enjoying it. I just wish I didn’t have to put my brain on hold to do so. Sure, this is a comedy and most situations are going to be played for laughs. But my ability to suspend disbelief is being sorely tested. As the series progresses through the first four episodes, Lee Gak is way too slow on the uptake. I’ll grant that it takes him a while to figure out the whole time travel/doppelganger thing, but don’t you think that once he understands that there is a guy in this world who looks just like him he’d be able to open his mind wide enough to embrace the possibility that there might also be a person in this world who looks just like the princess? Considering how quickly he grasped the concept of television, this shouldn’t have been such a stretch.

The other thing that’s bugging me are the merry henchmen. In episode one they were described to be intelligent, crafty free-thinkers. Sure, okay, they’re loyal to their king, but once they realized a) there isn’t a king in modern day Korea, b) their constant kowtowing draws a lot of unwanted attention, and c) that their best chance of returning to their time depends on the kindness of strangers, that they’d start trying to fit in? While I love the comedic aspects of the merry henchmen, I do wish they’d start living up to their potential. 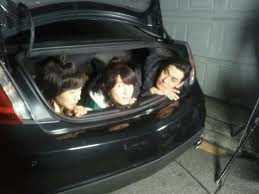 ANNA: Overall, I’m enjoying this drama although it seems to reel me in gradually. I think that anyone considering watching it has to view at least the first two episodes because they are so different in tone. I didn’t feel truly hooked on this series until the very end of episode 4, where we see the dramatic tension of the show ratcheted way up as the whole reincarnation storyline that was introduced in the first series was finally addressed.

I liked the storyline with Park Ha’s business and the henchmen being willing to help out so much. I’m wondering what sort of outfits they will have to wear next, since they’ve already been in tracksuits and furry mascot costumes. After 4 episodes, Micky Yoochun’s performance is really starting to grow on me, and I can see why Emily is such a fan. The time-traveling prince is a tough role to pull off, and it looks like there will be plenty of challenging scenes ahead after the end of episode 4. While I’ve enjoyed this series, I think it took 4 episodes for me to become enthusiastic about it. I watched the first 4 episodes gradually over time, but with the twist scene at the end of 4 (even though it was a bit predictable), I can definitely see myself marathoning the next few episodes as soon as I get time to watch more.

EMILY: I’m having a hard time containing my thoughts to episodes 1-4 because I have gone ahead and watched all the episodes that are out now and am current :) I’m enjoying the show very much. It seems to have several mini story arcs. It begins serious, and then shifts to ridiculous for several episodes, as our spoiled prince and his color-coded Joseon Power Rangers adjust themselves to our times. This is played up for maximum silliness, as the writers find not just the major things (cars, elevators, etc) to baffle our time-travelers with, but also a lot of small details of modern life that we take for granted. From putting out a fire by spitting toilet water, to the deliciousness of omelet rice, to the fabulous black card that will let the prince buy anything (oh, the power of chaebol credit limits) there is a lot to get used to in our time. But once the hilarity ends, things start to take a more serious turn as the murder mystery heats up, the Prince finds his Princess, the villains step up their scheming, and romance begins to bloom. Through all of it, I like the chemistry between Park Ha and the Prince, the antics of the Power Rangers are endearing (poor lovelorn blue ranger), and I don’t even mind the obligatory kdrama Birth Secret that pops up. I will say that the villains in this series are in the running for worst villains ever. She, because of her skill at lying and ability to make me want to poke her eyes out, and him because of his total ineptitude. I don’t think he could manage to kill anyone even if he aimed and shot a gun directly at their heart.

I really look forward to how this drama will play out. 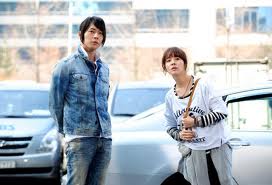 ANNA: I think you’re right about the series functioning in mini story arcs, as I can see a new arc developing at the end of episode 4 and start of episode 5. In some ways I like that structure because having the story presented in 3-4 episode bursts makes it easy to stop and start the series if you don’t have the time to watch the whole thing at once. I think I will be watching the entire series, even though I’m not going to be able to get through it as quickly as Emily.

EVA: I am glad you two have enjoyed what you’ve seen of the show so far, but the more I think about it, the more sure I become that I don’t need to see the rest of the episodes. Yeah, Mickey’s character begins to grow and the plot begins to thicken, but all the silliness has pulled me out of the story enough times that I don’t think I want to dive back in.

ANNA: So Rooftop Prince is a good show if you enjoy your kdramas with family angst mixed with slapstick, but not so great if you find yourself with a low tolerance for silly men dressed in tracksuits. Have you watched this show yet? What did you think?