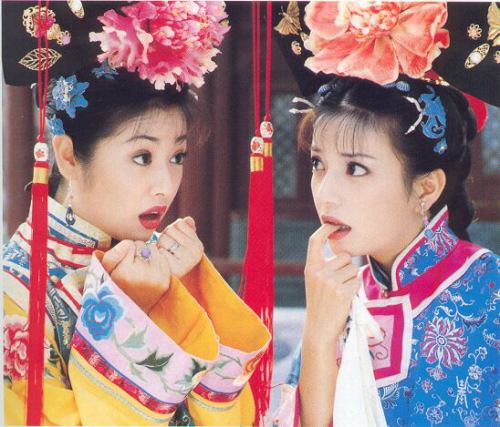 Yet another screenshot from the TV adaptation.

So, last Tuesday I talked about the super-popular novel Princess Pearl. Now I’m going to keep talking about it.

I don’t know whether to call them “friends” or “sisters.” As I mentioned in the previous post, Chinese-speaking cultures tend to value family relationships above romantic relationships, and this also applies to friendships. But what happens is that, especially in stories set in historical periods, whenever two people become close friends, they become sworn sisters/brothers. In a way, in Chinese, a “brother” or “sister” is anybody from the same generation with whom you have a close relationship. This can even apply to romantic couples, which weirded me out until I got my head around the fact that in Chinese-speaking cultures, calling one’s lover “sister” or “brother” does not imply anything incestuous.

One of the things which makes Xiaoyanzi and Ziwei’s friendship so entertaining is that they are opposites. Ziwei is well-educated, has an excellent understanding of the high arts, is a beautiful singer, an excellent chess player, etc. Xiaoyanzi is illiterate, and can’t follow proper etiquette even when her life depends on it. Ziwei, while healthy, is physically weak … whereas Xiaoyanzi is quite good at hand-to-hand combat, jumping over walls, and other physically-demanding feats. Ziwei can’t lie, but she’s very good at staying quiet. Xiaoyanzi can’t stay quiet, but she’s an excellent liar.

What they have in common is their passionate feelings. I think this is ultimately what brings them—and keeps them—together. Xiaoyanzi is willing to brave any danger to keep Ziwei safe … and Ziwei is willing to sacrifice anything for Xiaoyanzi’s well-being. When someone feels that way about you, it’s hard not to respond, and when it’s mutual, it’s hard to break apart. No wonder Xiaoyanzi and Ziwei care more about each other than the charming young men they fall in love with. Ultimately, they even come to the conclusion that their relationship with each other is more important than their relationship with their father, Emperor Qianlong. This is a classic example of how the more one gives, the more one has. 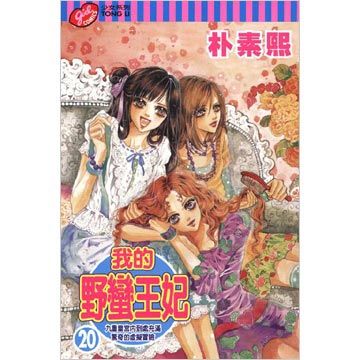 Out of all of the Asian comics I am familiar with, Goong feels the most like Princess Pearl. They are both about a teenaged girl from the commoner class who finds herself inadvertendtly becoming a princess, locked away inside the royal court. Neither Xiaoyanzi nor Chae-Kyung are very good at being refined, well-behaved princesses, and it’s their very roughness and lively spirit which eventually wins over the love of almost everybody in the palace.

Princess Pearl and Goong are entertaining for some of the same reasons. There’s plenty of opportunity for comedy as the commoner way of life and the royal way of life clash with each other, yet underneath all of the amusing escapades a potential tragedy is brewing (notice that I say *potential* … I am not trying to imply that either story actually is a tragedy).

And of course, some of the major details are really different … Goong really is a romance, and Princess Pearl scores way better on the Bechdel test (come to think of it, it’s very rare for two male characters to talk about something other than a woman in Princess Pearl), not to mention the whole time period/location thing. But I think it would be fair to call both of them soap operas.

I don’t think it’s a coincidence that Princess Pearl and Goong feel so much alike. The 1998 TV adaptation of Princess Pearl was extremely popular in South Korea (where it is called “Emperor’s Daughter”). Goong started serialization just a few years later in 2002. I don’t know whether or not Princess Pearl inspired Park SoHee, but considering what I’ve read about the impact Princess Pearl had on South Korea, I think it must have at least been an influence.

I do not buy the argument that non-Asians can’t understand the oh-so-mysterious Chinese culture. I think somebody who had never even heard of China before could love this novel. Understanding what it’s like to be a human being is all that’s required, as far as I’m concerned.

And considering that this story has proven extremely popular in places with such different cultures as Mongolia and Indonesia, I don’t see why this couldn’t have been a worldwide hit … aside from reluctance on the part of the media to even try.

Maybe they should make a comic book adaptation … manhua, manhwa, manga, whatever (the original novel and the 1998 TV adaptation are available in both Korean and Japanese) and then get that licensed overseas.

I figured that, since this is one of the most popular Chinese-language novels ever, that it would at least be readable. What I didn’t expect is that it would become one of my personal favorites. It’s really a very simple story, yet the simplicity makes me love it harder. Actually, it’s so simple that I’m even a bit embarrassed that I love it so much.

I think one of the fundamentals of human existence is that we crave love and affection from others. The flipside is that we are all afraid of losing that love. This is true whether we are a street urchin or the emperor of China. To some extent, it doesn’t matter where that love comes from—a parent, a sibling, a child, a lover, a friend, a stranger. That craving, and that fear, can drive us to both wonderful and terrible things.

I think this is the chord that this story has struck in a billion people.

Sara K. …. has completely forgotten what she wants to say. Oh well. When she remembers, she can stick it at the end of a future post.