Last spring at the Seattle International Film Festival, I discovered Ken’ichi Matsuyama through a sold-out screening of Norwegian Wood. The film came back to Seattle this winter, so I took the opportunity to see it again and then decided to check out a few other Matsuyama films. 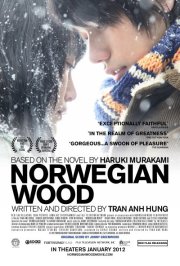 An adaptation of the popular Haruki Murakami novel, Norwegian Wood is an overwhelmingly sad picture which played better the second time through.

The film centers on Toru (Matsuyama), a university student who is torn between the tragedy of his past and the possibilities for his future. The past is represented by Naoko, the longtime girlfriend of his best friend Kizuki. After his inexplicable suicide, Naoko and Toru try to process the devastation together. For Naoko, it is impossible to deal with, and as she sinks into depression she threatens to pull Toru down with her.

However, at university Toru meets Midori (the utterly charming Kiko Mizuhara), who gives him the opportunity to choose life.

The first time around I found the film very heavy, unsurprisingly! It is more emotionally intense than the novel, partially because the film is more present, whereas the novel was reflective. The novel left space for humor, like expanding the character of Toru’s roommate Storm Trooper, and it took us out of the potentially-claustrophobic triangle of Toru, Naoko, and Midori by allowing more space for characters like Naoko’s eventual roommate Reiko to develop.

However, I am nothing if not understanding of the limits of adaptation. Tonal departures or character embellishments which work in a novel can easily feel out of place in a film.

More importantly, Norwegian Wood is a gorgeous piece of cinema. I was better able appreciate the unique textures, both visual and aural, when I saw it the second time. Overall the film is very lush, and it was easy for me to get lost in the visuals of everything from the gorgeous landscapes of the countryside to the patterning of fabric, and the excellent sound design between the university and the woods. Toru is swept through the film on waves—waves of sorrow, waves of protesters, and waves of wind through the long grasses on his long walks with Naoko—and I was willing to be swept along with him.

I followed it up with another, rather different adaptation. Death Note, based on the manga of the same name, is the story of Light, a college student with dubious ethics who discovers a notebook. It’s the death note of the title, and it is quite a find. If you write someone’s name in it, they die.

Of course, it isn’t quite that simple. We quickly learn the many rules of the death note, and to the credit of the plot, the rules appear perfectly timed to answer audience questions. 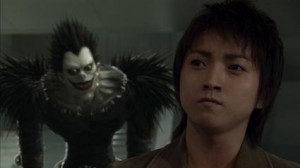 Light (Tatsuya Fujiwara, devilishly creepy) uses the notebook to become a sort of Dexter Morgan from afar, causing the deaths of people who he thinks truly deserve it. However, he quickly begins using it in his own self-interest, killing the innocent, and manipulating the rules to manipulate people. Having not read the manga yet, I don’t know if Light is so unapologetically unpleasant in that as well. I hope so! I like the idea of a main character that the audience is so quickly turns against.

Light is accompanied in his adventures by a Shinigami named Ryuk, a sort of death god who owned the notebook before, dropped it in hopes someone interesting would pick it up, and now is just curious what shenanigans Light might get up to. Ryuk is essentially the world’s worst imaginary friend. The character, delivered via cartoonish CGI, resembles nothing so much a death metal version of the Joker, if the Joker was addicted to apples.

Ken’ichi Matsuyama, offscreen for over half of the film, plays the mysterious L, a reclusive genius detective. He’s an almost-otherworldly character, pale and compact, locked away in a hotel room and outsmarting criminals from afar. He steals the movie with his physicality alone, nearly unrecognizable between this and his role as Toru. Shoulders hunched, he hides behind eye makeup & shaggy hair, living off of sweets.

Both L and Light are childlike, existing very little in the real world and instead hiding away in their respective rooms, playing out a high-stakes game of strategy virtually. With all of the screens (television news, security footage, and the like) it’s almost a video game with real-world consequences.

Speaking of consequences, ladies do not fare well in Death Note despite my early hopes, particularly for Naomi Misora, a stellar FBI agent. One is introduced solely as a set-up for the second film, and others exist to be manipulated by Light via the notebook.

The whole structure of Death Note is frustrating because Light has absolute power with the book. He kills from afar, and after the deaths have been played out we take no pleasure in learning how the manipulations work. We’re seeing the strings of a show we didn’t enjoy the first time around, and as the film progresses and the deaths become more elaborate, I started to despair that anything will stop Light.

Thanks to the cliffhanger ending, I’m going to have to check out the second film to see if it ever happens. I’ll be sure to report back.

In contrast, Gantz was also a film based on a manga series and split into two parts, but the first film worked as a complete story on its own. Though clearly there are many unanswered questions regarding the mechanics of the plot and the fate of secondary characters, Kurono undergoes a satisfying character arc. There’s an emotional conclusion if not a technical one.

Gantz is strange, the sort of picture that would play really well with a midnight, cult-film crowd. It opens with the accidental death of two high school students, Kurono (Kazunari Ninomiya) and Kato (Matsuyama). Rather than moving on to any traditional afterlife, they find themselves in an unfurnished apartment along with a few other people and a large black sphere. 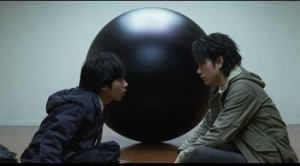 The sphere has brought them here to participate in a life-or-death game, fighting against aliens who have been living on Earth. There are some rules to the game, though it seems fewer rules than were involved in Death Note.