This week, we take a look at new releases from Viz Media and Tokyopop, as well as a continuing series fromYen Press.

MELINDA: Greetings from the land of mountainous snow!

MICHELLE: Salutations from the land of Floridians feeling put out because they have to wear gloves!

MELINDA: I hate you people.

MICHELLE: Fine. Then we’re taking back all our sweet tea.

MELINDA: So, while you’re feeling smug, wanna tell me what you’ve been reading? 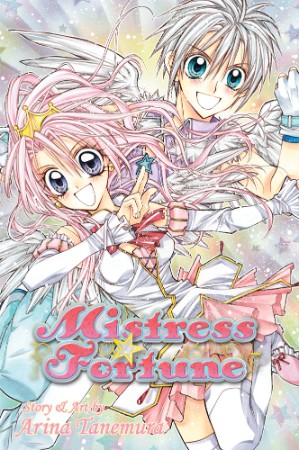 MICHELLE: First up for me this week is Arina Tanemura’s Mistress Fortune, a one-shot due out from VIZ on February 1st. I haven’t had the best luck with Tanemura—early on, I enjoyed the anime version of Kamikaze Kaito Jeanne and the manga Full Moon o Sagashite, but was disappointed by the overpopulated and abruptly truncated Time Stranger Kyoko as well as what little I read of The Gentlemen’s Alliance Cross. Quite frankly, I expected not to like this.

At first, it seemed like I’d be right, since I rolled my eyes several times during the opening pages. The gist of the plot is thus: Kisaki is a fourteen-year-old psychic who works for a government agency fighting adorable aliens. She’s partnered with Giniro, a boy her own age, with whom she is in love but about whom she’s forbidden to ask any personal questions. Their code names are Fortune Quartz and Fortune Tiara and they focus their psychic powers by affixing cheerful star-shaped stickers to their target.

But, y’know, somehow this story managed to grow on me! I think part of it must be that Tanemura is simply better when dealing with smaller casts of characters, as in those series I mentioned liking above. Secondarily, because it’s a very relaxed, three-chapter love story it isn’t as if I went into it really expecting any sort of depth. Kisaki loves Giniro. Giniro is fixated on Kisaki’s boobs. She discovers he has angst. A very brief misunderstanding ensues. They declare their love. Spoilers? Not really; it was inevitable.

One thing that genuinely pleased me is that Tanemura’s attempts at humor are actually amusing this time. I still shudder in horror at a theoretically comical side character from Time Stranger Kyoko, but the plushie-looking alien, EBE-ko, whose dreams is to be a socialite with designer bags, is actually lively and cute. There are also a couple of fun “reaction shots” from eyewitness animals, like if something slightly naughty happens, you’ll cut to a nearby frog who says, “I saw it!”

No, Mistress Fortune is not great, but it’s certainly much better than I’d expected.

MELINDA: I actually read this recently as well, and my experience was very similar to yours. I started out rolling my eyes, but was mostly won over by the end, mainly thanks to the whimsical charm of EBE-ko. Though it’s a pretty shallow romance overall, it’s also very appropriate to the age of the characters and the tone of this short manga. I wasn’t wowed or anything, but I was pleasantly surprised.

MICHELLE: Exactly. It gave me some hope that Sakura Hime, Tanemura’s other new VIZ series (due April 5th), might be kind of fun. The Heian Era setting is encouraging, at least. 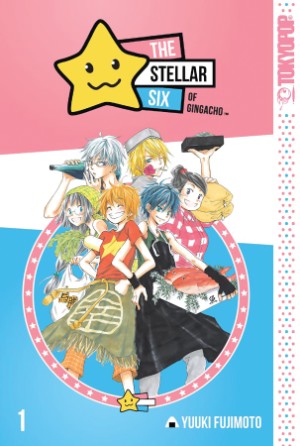 MELINDA: Yes I did, actually! You know, despite your recommendation, I still wasn’t quite prepared for the utter sweetness that is Yuuki Fujimoto’s The Stellar Six of Gingacho.

For those who don’t know, the series revolves around 13-year-old Mike (pronounced “Mee-kay”) and five friends she grew up with, all from families who own food stands in a busy street market. Over the past year, as they entered middle school, the six have quietly drifted apart, each making new friends and becoming increasingly awkward with each other. Feeling the loss, Mike tries to bring the gang back together by inviting them to enter a traditional dance contest at their market’s summer festival. Though her efforts are unsuccessful at first, a mutual enemy finally puts them all on the same page.

The story is simple and not particularly suspenseful, but Mike and her friends are so likable and fun to be with, it’s a real pleasure to watch things play out.

The series’ first volume focuses mainly on Mike and her best buddy, Kuro, son of the market’s fishmonger, from whom she was inseparable until puberty came along to make their friendship more complicated. Their story is nothing new, but there’s something so fresh about the telling of it, you’d swear it was the first of its kind. The secret to this may be the fact that neither their affection nor their awkwardness is overplayed, leaving smaller moments to stand out with real poignance. A panel, for instance, in which Mike first notices that Kuro’s hands have gotten bigger than hers, is actually quite touching, though it comes and goes in the blink of an eye.

Fujimoto’s artwork is spare and not especially distinctive, though like this story, it’s surprisingly expressive. And the fact that one of the Six is a genuinely lovely, overweight girl earns about a hundred points from me.

Though the others of the Six are yet defined by fairly surface characteristics, I expect they’ll each find their moments in upcoming volumes of the series. I honestly can’t wait.

MICHELLE: Oh, I’m so glad you liked it! You mention several of the things I liked best, myself—the moment about Kuro’s hands and the overweight character who is not written off as “fat girl” and given no face or personality—and captured the appeal of the story well when you said that though the story isn’t new, something about the telling feels fresh. I do get the feeling each of the friends will receive more attention as we go along, but I like Mike a lot, so I hope we never stray too far from her perspective.

MELINDA: Yes, Mike is a lot of fun, and really it’s Fujimoto’s characterization of her that has me so looking forward to getting to know the other four kids. I have a lot of confidence that they’ll all be equally as special. Also, Mike and Kuro have such a sweet backstory, I feel certain we’ll see more of the bonds between the others as well. 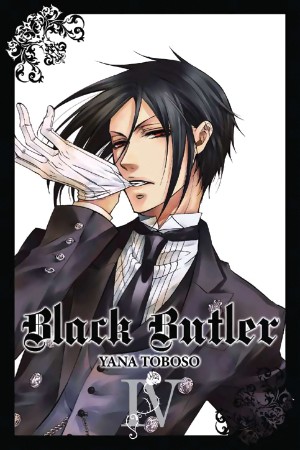 MICHELLE: I read the third and fourth volumes of Yana Toboso’s Black Butler. Despite some terrifically unfunny supporting characters, I’ve enjoyed this series from the beginning, but the third volume really takes things to a whole new level.

In this series, a thirteen-year-old named Ciel Phantomhive is the head of his family after a fire claimed the lives of his parents. To assist him in his plans for revenge he has entered into a contract with a devil who is serving him in the guise of his butler, Sebastian. The Earls of Phantomhive have always served as a “watch dog” for the crown, a duty Ciel is now expected to perform for Queen Victoria. When she sends him to London to find Jack the Ripper, he duly complies, not realizing someone from within his own family is involved.

There are probably a million historical inaccuracies in this setting, but I don’t care. I’m a sucker for Victorian England, and it’s simply a lot of fun watching Sebastian get into a fight with a chainsaw-wielding corrupt shinigami on a cobblestone street. Moreover, the change of scenery provides some respite from the entirely
incompetent servants at the Phantomhive manor.

They return in volume four, alas, along with a pretty self-proclaimed Indian prince with an impressive butler of his own. This time Ciel is in London to investigate assault crimes against Englishmen who’ve recently returned from India, but developments in the case somehow prompt the leads to contemplate entering a curry competition. I didn’t enjoy this volume as much as the third, but the emphasis on solving mysteries is pretty fun and Toboso’s art is very easy on the eyes.

MELINDA: I’m heartened a bit to hear your take on volume three, since I let this series go after the first two volumes which did very little for me. The third volume actually sounds like it might be genuinely fun. Maybe I’ll give it another look. Do you find yourself looking forward to the next volume?

MICHELLE: I do! In fact, I even pondered checking out the anime, which is a rare thing for me. If you’ve let the series lapse, I definitely recommend checking out at least volume three because it shows the potential of this series to become something genuinely fascinating.

MICHELLE: Now I’m genuinely hoping “fascinating” wasn’t an overstatement. I’ve at least become invested in a way I wasn’t before, which is really all one can ask for.

MELINDA: That’s good enough for me!

Join us again next week, when we’ll be discussing Karakuri Odette for a special MMF edition of Off the Shelf!