I am very pleased to introduce Jocilyn Wagner to readers of Experiments in Manga. Jocilyn doesn’t currently have a platform of her own, but she was still interested in occasionally writing about manga. And so, I’m happy to offer up some space here and welcome her to Experiments in Manga as a guest.

Greetings and Salutations! Some of you might know me from my love of yuri and occasional manga and light novel translations, but that’s not what I’m doing this time. Instead… I thought I’d introduce you to some of the most forgotten and/or unappreciated (usually for good reason) manga I own, which have, in all likelihood, never before been reviewed on a Manga Bookshelf blog!

I’d like to begin with a title that was so under-sold and under-appreciated it literally debuted at number 92 in graphic novel sales. The year was 2006; it was the end of an era. I’d just wrapped up my undergrad and year-long stint as president of the Western Michigan Anime Addicts and my heart was still full of some of the incredible anime we’d enjoyed: Paradise Kiss, Madlax, Last Exile, Read or Die, the list goes on. In my youthful vigor and utter boredom I was working on one of the many anime subtitling teams (in the days before Crunchyroll a great many of these existed if you can believe it!) editing scripts for #Ishin, when I was asked to finish up work on a silly series no one was watching. It was bizarre, ugly and ridiculously cute, and the episodes were so short it would be a breeze. I’m speaking of course of Asagiri no Miko (朝霧の巫女). You may now groan and pinch your noses in despair and hopefully save yourself the trouble of reading the following review of TokyoPop’s 2006 edition of the series they called “Shrine of the Morning Mist.” 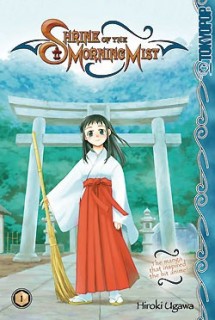 The name has always been something of a sticking point with me since a literal translation would be closer to “shrine maiden of the morning mist” but then, I suppose TokyoPop didn’t want to confuse people with the bull in a china shop, Kannazuki no Miko, for which they’d already used the term (never mind the fact that the miko in Asagiri no Miko actually resemble real miko and Himeko and Chikane are rather infamous, but not for their pious purity), but I digress.

Ugawa Hiroki’s story is usually seen as a seinen action comedy, but I always thought of it as a supernatural slice-of-life romance. In the fine tradition of early 2000s dating sims, the story revolves around a loner teenage dude (Amatsu Tadahiro, usually referred to as Hiro) who returns to the home of his childhood and some of the girls he left heartbroken in his wake. In this case, the brokenhearted is his cousin Yuzu who is painted to be a fiery but loveable tsundere, as well as his closest childhood friend. Yuzu is the middle child of three girls: Kurako, the eldest, is quiet, thoughtful and spiritually driven and has made it her goal to bring the two star-crossed lovers back together. She reminds me of a cross between Belldandy and Toudou Shimako. Yuzu’s younger sister Tama-chan is the fun rascal who dotes on “Hiro Onii-chan” but often speaks with a maturity beyond her years. Actually she very closely resembles Yukino’s sister Kana from Kare Kano, except she isn’t a manga geek. Their father, in his insane knee-jerk reactions to everything, sketchy behavior and extreme unpopularity could easily be mistaken for Shimura-sensei of Azamanga Daioh! fame. A chapter or two into the series, we’re introduced to the girls’ mother Miyuki. I’m not at all sure how to describe Miyuki since she isn’t given a lot of dialogue in this volume. She’s really rather unlike other manga moms: she arrives on the scene with a samurai-like speed, agility and appearance, wielding a bouken and saves Hiro from becoming breakfast to a giant cyclops. The reader’s told she’d been sent to Izumo, so one might infer she’s a gifted Shinto priestess, but it’s not at all clear at this point. Finally, we’re introduced to Koma-san, a mysterious short-tempered but otherwise solemn woman who claims to have known Hiro’s father, though he had died before Hiro was born and this woman looks to be in her mid-to-late 20s. The way Koma is drawn, I can’t help but be reminded of Yumura Kirika, except Koma is endowed with some rather annoying feline qualities. No doubt inspired by a little known game at the time, Tsukihime.

The plot is tragically somewhat thin. Hiro has been traveling, searching out his way in life and has finally come home to the quiet town of his childhood (Miyoshi, in Hiroshima Prefecture). His cousins, the Hieda sisters put him up for the night but are hesitant to let him go since it’s obvious Yuzu still has feelings for him. From the moment he arrives, Hiro is hellhounded by a mysterious sorcerer who wears a tengu mask and summons a host of cruel-intentioned spirits to eliminate Hiro and his spiritual potential before it upsets the balance of something or other. Tengu-san and Hiro have many annoying random encounters in which Tengu-san is always easily defeated by the sisters, and a thoroughly incompetent yet nevertheless unappreciative Hiro is saved from certain doom in the nick of time. One might compare Hiro to Morisato Keiichi, except Hiro’s not all that nice or mature. He’s also unmoved by Yuzu’s total red-faced embarrassment (which comes into play whenever he’s around), though he obviously remembers what transpired between them five years ago. Yuzu’s mom and sisters are constantly trying to push Hiro and Yuzu together. That’s basically the entire plot.

Tune in next time for another segment of The Manga That Time Forgot/Was Hoping To Forget. ~jocilyn