Anna: Welcome to Bringing the Drama’s discussion of Faith, the newish show starring Lee Min Ho. Faith centers around the misadventures of a modern day plastic surgeon named Yoo Eun Soo who is kidnapped by a handsome soldier Choi Young and taken back to the Goryeo era, where she is greeted as a doctor from heaven. There are superpowers! Ninjas! Cranky Kings and Queens! Bureaucratic machinations! Faith is streaming on Dramafever and Hulu. 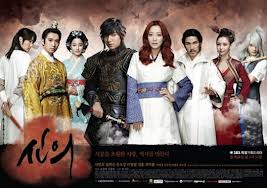 New addition to the Bringing the Drama roundtable Michelle Smith joins us as we ponder the answers to the pressing questions raised by this drama such as:

Are grommets historically accurate? Can they also be sexy?
How hard would you clutch your handbag if you were stranded in the past?
Will you forever be suspicious of people wearing dangling earrings?

What were your reactions to Faith?

Michelle: I’ve not finished it yet, but I’ve certainly gotten farther with it than I have with any other k-dramas. I’d say episode four is around where I started to really enjoy the entirety of each episode, as opposed to just enduring the parts where Eun Soo was particularly loud and whiny. I admit to snickering unkindly about a few things—especially Eum Ja’s unfortunate wig—but on the whole I like it a lot. I’m a fan of political scheming in my fantasy, and Gi Cheol’s multifarious plots supply that nicely. 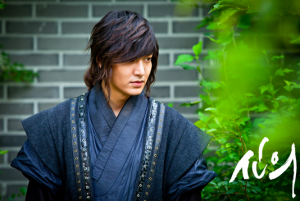 Anna: Eun Soo is fairly whiny, but I found myself liking her anyway for a few reasons. One is that suddenly being transported into the past would be traumatic for anyone. The other reason is that I was amused by how much she was constantly clutching her handbag. I was actually alarmed and concerned when the handbag disappears later on in the series with no explanation. I also found her weird get rich quick schemes amusing. Her attempts to collect antiques and launch a business in homemade cosmetics were pretty funny.

Eva: Ha! I didn’t notice the handbag clutching until about episode six (I now wonder how I missed it). What made me giggle in the beginning was how every symptom presented by just about everyone Eun Soo treated was likely to cause pneumonia.

Like Michelle, I’m only about half way through the series. As usual, for me anyway, it took a good three to four episodes before I was sure I was going to like the show. And I’ve got to tell you, I’m loving it. I’m not nearly as attracted to crack-for-crack’s-sake shows as Emily is (don’t get me wrong, there’s plenty of crack here, just lots of other stuff, too), so the added history, political intrigue, and smattering of romance made all the difference for me. In fact, this show reminds me a lot of Diana Gabaldon’s book Outlander, only less Scottish. 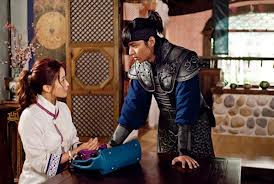 Emily: I really enjoyed Faith. While it didn’t “wow” me as much as I had hoped when I read the original premise and news articles about the series, I still found it to be, for the most part, engaging and fun. I think it could have been even better with a more stylish historical look like in another historical fantasy airing at the same time, Arang and the Magistrate. Faith seemed to be reaching for an epic feel, and didn’t quite get there. It was really the main relationship that carried this show for me. Things got bogged down a little in the middle when all the factions seemed to be going in circles repeating the same plot points a few times, but I was interested enough in the development of Choi Young and Eun-Soo’s relationship enough to stick it out. When Lee Min Ho as Choi Young gets serious, he’s very… appealing :) I also greatly enjoyed the supporting characters, in particular, the relationship between the tiny King and Queen. I don’t want to spoil anything for people who haven’t seen all of it yet, so I’ll just add that I also liked the development of the main villains.

Time travel has been one of the most popular plot trends this year. Of the 4 series featuring it (Faith, Doctor Jin, Rooftop Prince, and Queen in-Hyun’s Man) I still have to call Queen In-Hyun’s Man my favorite, followed by Faith, then Rooftop Prince and lastly Doctor Jin.

Michelle: Oh yes, there’s much striving to be epic and it sometimes backfires. I actually think they use musical cues for this a lot. The opening theme is fairly grandiose, but there’s a lot of music within the episode, too. Sometimes it’s awesome, like when it bolsters a triumph for the good guys—I’m thinking of the scene where King Gong Min, having cast aside his Yuan garb, welcomes Wu Dai Chi into the throne room—but it sometimes tries to manipulate the audience into thinking something is, say, romantic, like when Choi Young indulges in a flashback montage that includes Eun Soo stealing vases or whatever.

Anna: I think that for Eun Soo, stealing vases IS romantic! Another reason for the almost but not quite epicness of the show is the tendency of Korean Dramas to frontload most of their budget onto the first couple shows and then back off a little bit. If every episode included special effects of Choi Young using his lightning powers and a random ninja-infused animated flashback, the show might have seemed a bit broader in scale. Overall though I didn’t mind the focus on relationships and I enjoyed the supporting cast in addition to the two leads. I do agree that at certain points the plot did get a bit repetitive. How often can someone get poisoned, kidnapped, or run away only to come back to the palace?

Michelle: Yeah, I was kind of frustrated by that, especially after the king had engaged in all sorts of cleverness to wrest Eun Soo from Gi Cheol’s clutches—though he largely did this to save face with the queen—she ends up spending time with Gi Cheol again because he’s got that notebook of hers. But all the same, I’d see why she’d want to know more about it! 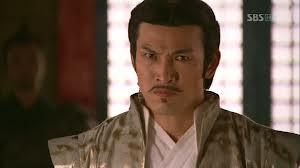 Gi Cheol and his Evil Earring

Really, I find the mystery of how that notebook came to be (I’m not quite done with the series, so I don’t yet know the answer) sometimes more compelling than the relationship between Eun Soo and Choi Young. I love her when she’s serious, and love the conversations they have when she is in that mode, but sometimes I think the actress just isn’t up to playing angry or desperate and it just comes across as whiny. Either that, or those moments are poorly written. I can’t decide.

I agree about the supporting cast. I actually like nearly all the female characters—the queen, Court Lady Choi, Hwa Soo In, —more than Eun Soo with the exception of the mute herbalist, whose seems to’ve only received the direction to “sneer a lot.”

Anna: If someone had asked me my opinion of Lee Min Ho’s career after watching him in Boys Over Flowers and Personal Taste, I would not have predicted that he would suddenly become a believable action star, but with City Hunter followed by Faith, that’s exactly what happened. Faith won’t disappoint his fans and I’m curious to see what type of series he decides to do next.