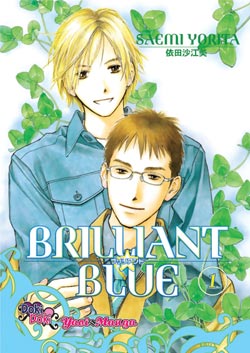 Shouzo Mita is the heir to a construction business who left home after school to make his own way, not intending to return until at least the age of thirty. Life has other ideas for him, however, dragging him back years early to fill in for his father who has suffered a back injury. His first day on the job, he is re-introduced to a number of old school friends, including Nanami Ushijima, once a pasty-faced, chubby, slow little kid (with the nickname “white piggy”) who now has the looks of a pop idol. Nanami’s still a bit slow, especially in terms of social skills, but he’s cheerful, kind, and a skilled electrician with an unusual knack for numbers. Unfortunately, Nanami’s been taken advantage of by Douwaki, a slick businessman with a taste for pretty young things, who has manipulated Nanami into a questionably consensual sexual relationship. Watching from the sidelines, Shouzo is less than happy, partly because he hates seeing a vulnerable guy like Nanami being used, and partly because he’s developed feelings for Nanami himself. Later on in the story, Shouzo discovers that Nanami has never gotten his electrician’s license thanks to the difficulty of the written test, so he takes it upon himself to study with Nanami and help him pass the test.