Just a quick note to let you know that a review of mine went up this evening at Manga Recon’s Otaku Bookshelf. The review is of Vertical’s release of Sakie Yokota’s heartbreaking memoir, North Korea Kidnapped My Daughter, and I hope you’ll take a moment to stop by and read it. This is not a perfect book by far, but I would recommend it to anyone. It’s a story that very much deserves to be read.

In other news, I finally finished reading Tokyo Babylon, and now I’m kind of traumatized. 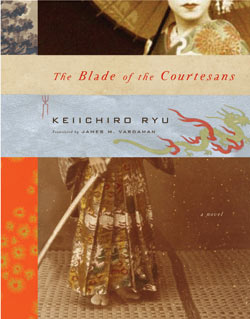 Matsunaga Seiichiro is a master swordsman, trained by the legendary Miyamoto Mushashi, who has spent his entire young life in the mountains of Higo province cut off from the rest of the world. At the age of 26, as directed by his now-deceased master, Seiichiro leaves the mountains with nothing but his sword and a letter of introduction and finds himself in Edo’s pleasure quarter, Yoshiwara. When he discovers that the man to whom the letter is addressed is no longer living, Seiichiro is momentarily lost, but he soon finds some purpose in defending those in the quarter against the Yagyu clan, a fearsome group of ninjas who are loyal to the shogun. Not everyone is as they seem and as the story goes on, much is revealed about both the society Seiichiro has wandered into as well as his own personal heritage.

Set at the beginning of the Edo period, The Blade of the Courtesans is painstakingly woven into the fabric of history. Keiichiro Ryu’s characters stand alongside well-known historical figures and the author obviously has an extensive knowledge and deep love of the period. Unfortunately, this attention to history is also responsible for one of the book’s greatest flaws. Ryu frequently pauses the story to explain terminology or expound on historical fact, which, while interesting, breaks the flow of the narrative to a nearly fatal point. These pauses increase as the book goes on, pulling the reader out of the story for pages at a time to offer detailed explanations of its historical context, most of which have only minimal impact on the plot. At times, Ryu instead uses his characters to deliver this information, which is just as clumsy and almost as distracting.

Also clumsy is the novel’s narrative mode, which spells out far too much of each character’s thoughts and feelings, saving the author from having to figure out how to reveal these things organically through action and dialogue. Some of this may be due to the difficulty in translation, but the result in English just reads as lazy writing. As with the huge chunks of historical background, what Ryu really reveals here is his lack of skill as a novelist.

The story itself is a strange, meandering thing, sometimes appearing to have gotten a bit lost, much like its protagonist. It is strongest in the beginning, before becoming too deeply mired in the long historical passages. Though it does gain some momentum just before the end, the conclusion feels quite rushed, as major characters are shunted quickly to the side with very little explanation.

For all its awkwardness, however, The Blade of the Courtesans has some truly stirring moments. Early on, one character delivers a sudden, fiery speech to Seiichiro as they lay on a rooftop, proclaiming, “Living ought to be something more magnificent. It’s so fantastic that just thinking about it makes you sigh, makes your blood rush. But if it’s like this… if that’s all it is, then I’ll cast it all aside. Any time, I’m ready to die!” It is in moments like this that Ryu is at his strongest, letting his passion run out over the page. He lends his passion to several of the supporting characters and even occasionally to the dully-virtuous Seiichiro, particularly in his encounters with elite courtesan, Takao, and in his art with the sword.

Unfortunately, some of that passion is marred by philosophies and biases that, while doubtlessly appropriate to the time period, are difficult not to find offensive today. Much of the novel’s philosophical emphasis is placed on the lifestyle and beliefs of the Kugutsu clan, a nomadic group of wandering puppeteers, who call themselves “companions of the way.” The Kugutsu pride themselves on their lack of worldly entanglements, and particularly on the strength and autonomy of their women, from whom many of the Yoshiwara courtesans were descended. It is difficult, however, to swallow a vision of female empowerment in which a woman’s liberty is measured only by the number of men she will share her bed with. The story constantly describes the power of women in the Yoshiwara society, yet in the midst of an impassioned explanation of how the women are able to come to Yoshiwara to “rinse away their origins” and escape from the persecution of their clans, it is revealed that they are indentured to the various houses in the pleasure quarter (all owned by men) until their 28th birthday, at which time they may choose to get married or to remain courtesans for the rest of their lives. That these women, shackled to a system that values them only for their skills in lovemaking, are held up as the pinnacle of female beauty and sovereignty is inexpressibly sad.

Though The Blade of the Courtesans offers a level of historical detail that anyone with an interest in Japanese culture would find genuinely fascinating, its difficulties as a fictional narrative are many, rendering it an ultimately unsatisfying read.