book and the sword 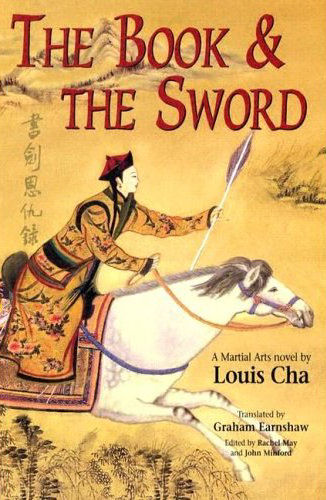 To kick off this review, I will go over the first three pages of the novel. Here’s a summary:

Page One: Li Yuanzhi, a 14-year-old girl, sees her school teacher, Lu Feiqing, kill flies by shooting golden needles at them. She begs him to teach her how to do it.

Right there, on the first page of the novel, we get the first glimpse of the writer’s imagination. He does not merely kill the flies, he kills them by SHOOTING GOLDEN NEEDLES AT THEM!!! Li Yuanzhi seems to be a spunky girl, which is always a good sign. And of course, page three sets up some suspense and promises a fast-moving story with plenty of action.

With an opening like this, I was pretty excited to read this novel.

The Book and the Sword is Jin Yong’s first novel. Jin Yong (English name: Louis Cha) is the most popular Chinese-language novelist of the 20th century. He is one of the most popular novelists of the 20th century period. The Book and the Sword was a sensation when it was first published in 1955-1956, and to this day it is still adapted for television (the most recent TV adaptation was made in 2008).

The story is set during the reign of Emperor Qianlong of the Manchu dynasty. The Red Flower Society is a secret society of sword and kung-fu fighters who want to restore rule by Han Chinese. I think the conflict here is really obvious.

As the plot gets thicker, things get messier, especially after the emperor’s secret gets spilled and Kasili (aka Princess Fragrance) gets involved.

Chen Jialuo is the most boring of Jin Yong’s main characters. He is virtuous, a good fighter … and that’s pretty much it. Almost all other Jin Yong leads are also virtuous and good fighters, but they generally have personalities too. Chen Jialuo does not, or at least his personality is so flimsy it does not count.

The worst is that he almost never experiences doubt or inner conflict, or questions himself, not even in a “Do I kill the man who caused my father’s death or do I marry his daughter instead?” kind of way. This is especially bad because he is put in situations where 99% of the human population would experience inner conflict, yet he does not. For example, towards the end of the novel, he has to choose between keeping something precious to him, or doing what he thinks is in the interest of the greater good. He goes ahead and does what he thinks is in the interest of the greater good without hesitation or even suffering. The explanation is that he thinks he is going to paradise after he dies, so it does not really matter if he has want he wants in life. Not only is this less interesting than actual conflict, it also rings false. Even people who believe in paradise, believe they are going there, and use that thought to console themselves would experience some reluctance and pain when they give up something precious. The fact that Chen Jialuo does not experience this makes me think that either this thing is not actually precious to him, or that he’s not human.

And then there is keeping track of the cast. There are other Jin Yong novels with a far larger cast of characters (Yǐ Tiān Tú Lóng Jì and Tiān Lóng Bā Bù come to mind), yet this is the only Jin Yong novel where I had serious trouble keeping track of who was who—particularly the various members of the Red Flower Society. I was able to keep track of Li Yuanzhi and Lu Feiqing pretty well because of the memorable opening of the novel, but most characters did not get such a memorable opening, so it was hard to sort out who is just a minor character and who is somebody I should actually remember, especially when a bunch of characters are introduced at the same time. In later novels, Jin Yong handles this much better. Significant characters generally get a memorable introduction, and are generally introduced one by one instead of in a batch.

And there are the fights. Many of the sword fights are just good guys and bad guys finding themselves in the same place at the same time, therefore they fight. All of the sword techniques are generic. It gets pretty monotonous. To contrast this with an excellent Jin Yong fight where the sword techniques are well described and interesting to follow, as well as having psychological depth, read my post The Condor Trilogy in Manhua: Fighting. To be fair, the fights in the second part of the novel are better, with more variety and human interest, but they still do not measure up to the fights in later Jin Yong novels.

First of all, there is Emperor Qianlong’s secret. It is a good secret. I will not spoil it here.

Then there is Jin Yong’s imagination. It is evident in passages like this:

“After a long time passed, Chen Jialuo slowly let her free, gazing at her blushing cheeks. Suddenly he saw behind her the shattered mirror, the reflection of two people hugging each other visible in every fragment, fantastic countless incarnations of themselves. He murmured ‘You see, the world is just a thousand Chen Jialuos, these thousand Chen Jialuos all embracing you.'”

(Please forgive my English translation for not being as elegantly phrased as the Chinese original.)

Of course, Jin Yong got lots of ideas from Chinese history and lore. For example, Princess Fragrance was inspired by the Fragrant Concubine, who, according to legend, was an Uyghur woman with beautiful looks and an even more beautiful smell. Jin Yong is at good at picking which ideas to borrow, and the historical background adds another layer to the story. He skillfully weaves his own ideas with other people’s ideas into a fresh narrative.

One of my favorite scenes in the novel is when Chen Jialuo goes to visit his mother. This is one of the rare times in the novels where Chen Jialuo actually seems heartbroken. He had been delaying visiting his mother because of his duties at the Red Flower Society, and when he finally does it he learns that she has just died. I can sympathize. I was actually more moved by this scene than certain scenes in other Jin Yong novels where mothers commit suicide right in front of their sons (a lot of main characters watch their mothers commit suicide in Jin Yong novels). Of course, Emperor Qianlong happens to be around when Chen Jialuo pays his respects to his late mother. This helps set up the reveal of the emperor’s secret, and foreshadows later events in the novel.

The Book and the Sword has been translated into English by Graham Earnshaw and published by Oxford University Press. It is supposed to include a character glossary, which I would have found really useful when I was reading the novel. Excerpts from this translation are available at Graham Earnshaw’s website, but I must note that some of the later excerpts might contain spoilers. Considering how expensive this translation is, borrowing it from the library is the most practical option.

I have only taken a brief look at the translation through Graham Earnshaw’s website, but based on what I looked at, it seems alright.

That said, I am still glad I read it. It deepened my appreciation for Jin Yong. Some of his techniques are more obvious in this novel than in other novels. Some of the ways this novel does not work for me helps me understand how other Jin Yong novels do work for me.

And finally, I am in the minority, at least among people who have expressed in English their opinions of this novel. Most people who have reviewed the Earnshaw translation have a positive opinion of the novel.

Still, why they decided to publish this in English and not Shè Diāo Yīngxióng Zhuàn (which, in my opinion, is the best choice for people who have never read a Jin Yong novel) is beyond me.

The Book and the Sword was technically the first novel Sara K. ever tried to read in Chinese. Of course, considering that she knew less than 800 characters at the time of her first attempt, she did not get very far (she did it more as an experiment than as a serious attempt). She did learn that it would probably be better to slide into rather then leap into Jin Yong … and then she saw Lee Chi Ching’s The Eagle Shooting Heroes in bookstores, and the rest is history.