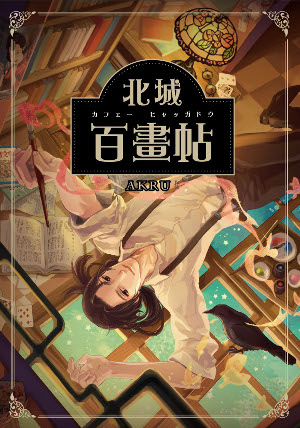 Would you like to sit down for coffee? Actually, I prefer tea myself. Let’s compromise and order a manhua instead.

This manhua is a collection of three short stories, all of which are set in the year 1935. Each story include a young Japanese man who owns a cafe, “Hall of a Hundred Drawings,” in the heart of Taipei. He can detect the supernatural, and has a crow as a companion, called Ian.

The first story, “Soaring Boy,” is about the little brother of a waitress who comes to Taipei to visit her. At first he doesn’t understand why his sister wanted to leave their hometown to work in the city … but in the city, he sees an airplane for the first time.

In the second story, “Pantomime and Song,” the cafe owner encounters the ghost of an Atayal girl (the Atayal are one of the indigenous peoples of northern Taiwan). I’ve mentioned the Atayal before, and Vic Chou, one of the stars of Black & White, has Atayal heritage.

The third story, “Room of Memories,” describes how the young Japanese man acquired the building where he set up his cafe (hint: the building was haunted). 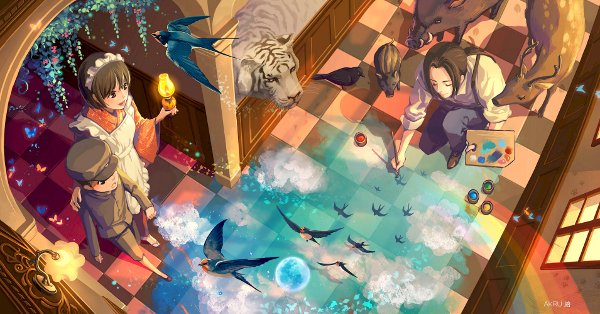 This is a color illustration for the story ‘Soaring Boy’.

All of the stories in this collection were originally published in Creative Comics Collection, which I have previously discussed.

Taiwan was ruled by the Japanese for 50 years. Taiwanese people have mixed feelings about this period.

On the one hand, the Japanese did a great deal to improve Taiwan’s infrastructure, which was the foundation for Taiwan’s later prosperity. The train system was practically built by the Japanese, and more of Taiwan first became electrified under the Japanese. The Japanese spread modern medicine through Taiwan and greatly improved public health (a big deal in a densely populated tropical island). Many advances in gender equality also happened under the Japanese—they banned the practice of footbinding (even though their purpose was to suppress Chinese culture, it was still a plus for women), and the Japanese era was the first time it was feasible for a girl who was not from a rich family to get an education. Overall, governance under Japanese rule was considered quite good.

The problem was the inequality.

There were two education systems in Taiwan—one for Japanese people, and one for everyone else (guess which one got more and better resources). Japanese people were preferred for government jobs, particularly well-paying government jobs, etc. Though there were Taiwanese people who wanted independence, based on the histories I’ve read, most of the population would have been okay with Japanese rule if they had been treated as equal citizens.

Though the manhua doesn’t directly address the equality, it makes references to it. For example, it mentions the segregation of Taipei into Japanese and Taiwanese districts, and it’s worth noting that the owner of the cafe is Japanese, not Taiwanese.

Another legacy of Japanese rule was increased contact with the outside world, particularly the world beyond East Asia. While various European powers had colonized parts of Taiwan, none ever got deep control over the island, and it was actually Japan which spread many European and American ideas in Taiwan (baseball, for example).

1935 was probably the peak of the Japanese era in Taiwan. It was the year that the exhibition to celebrate 40 years of Japanese rule was held (which is featured in “Soaring Boy”). Taiwan had already become much more developed and wealthier, and was relatively peaceful. Yet that was before World War II make things turn for the worse.

Anyway, here is some footage of Taipei in the Japanese era.

When it comes to 20th century fashion, the 1930s is definitely my favourite decade. What I like about 30s fashion is that it is so mature. It can be simple, severe, and practical, and still look great (little black dress FOR THE WIN). 1930s fashion can also look stunningly gorgeous … without losing its sense of proportion.

Taiwanese fashion in the 1930s has the distinction of blending Chinese, Japanese, and European influences. 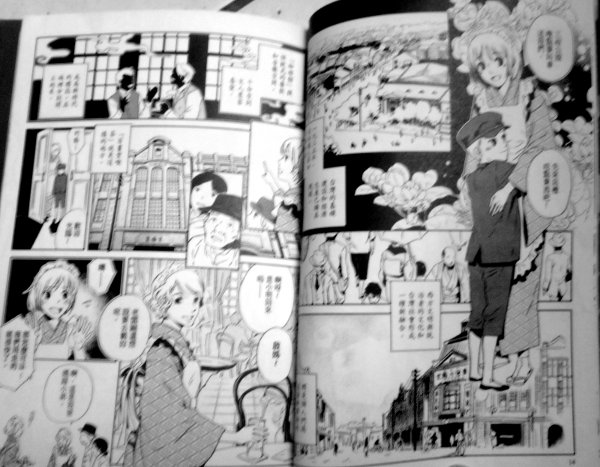 Akru researched specifically how waitresses dressed in 1930s Taipei. Notice that it looks both a little Japanese and a little European.

Akru clearly loves 1930s Taiwanese fashion, as she features clothing very heavily in most of her stories for Creative Comics Collection. She says that one reason she is so interested in fashion from the Japanese era is that there are so many historical TV shows set in the Ming and Qing dynasties that everybody is familiar with the clothing from those eras … but most people are not familiar with the clothing of the Japanese era. 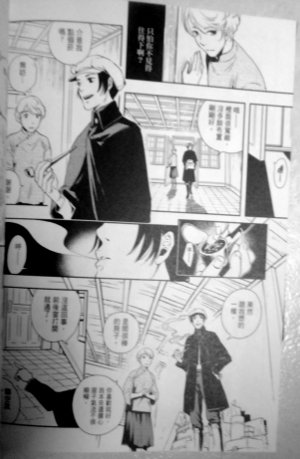 And it’s not just Akru. Dihua street, which was a key commercial street in the Japanese era (specifically, it was the main commercial of Dadaocheng, which some of the characters visit in “Soaring Boy”) is now turning in a hub for young Taiwanese fashion designers. I’ve seen some of their exhibitions, and they certainly seem to be drawing from the neighborhood’s historic roots.

Akru’s artwork is like good Chinese calligraphy – elegant, yet vigorous, yet balanced lines. 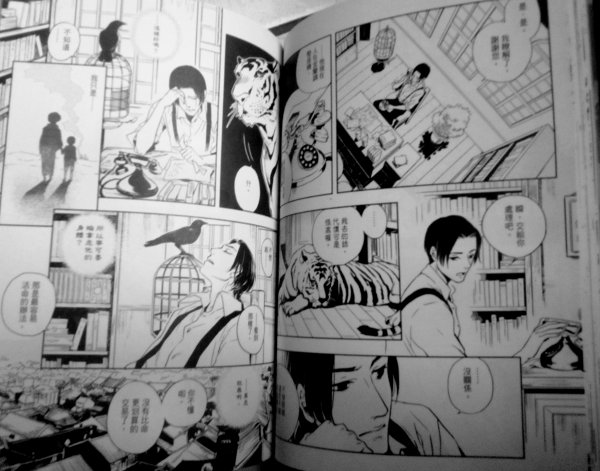 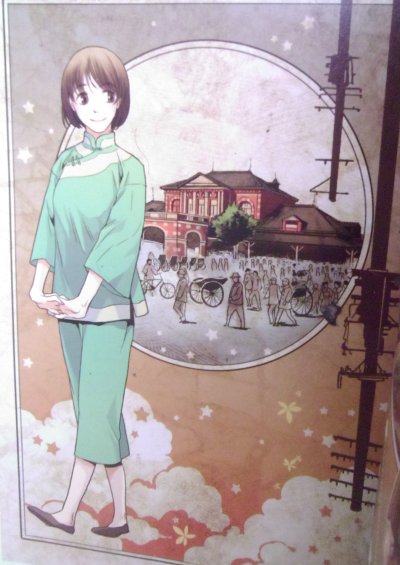 Let’s look at this picture. First of all, it’s got a nice hint of sepia while still being in color (this looks better when my cheap camera is not involved). And is has nice composition. We have the girl on the left as the focus. The round circle featuring the city makes a nice background—it adds “weight” to the right side of the picture, making it feel balanced, but without any object standing out it doesn’t take focus from the girl (it’s a good background, heh heh). There are some nice electric poles on the right adding more vertical lines to balance out the girl’s “weight,” but since they are nice and black, they don’t take away focus. 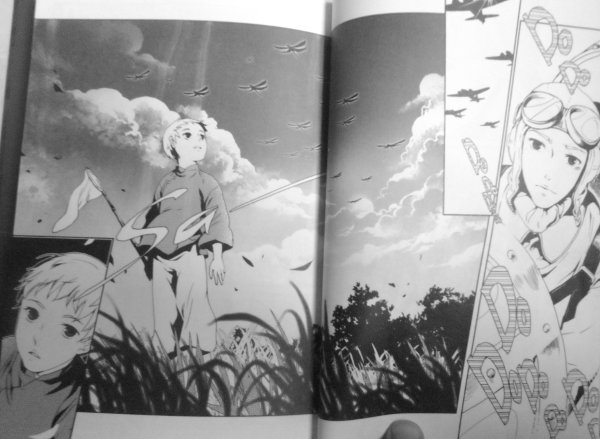 I like this composition too. The lack of objects in the center really conveys the openness of the sky. 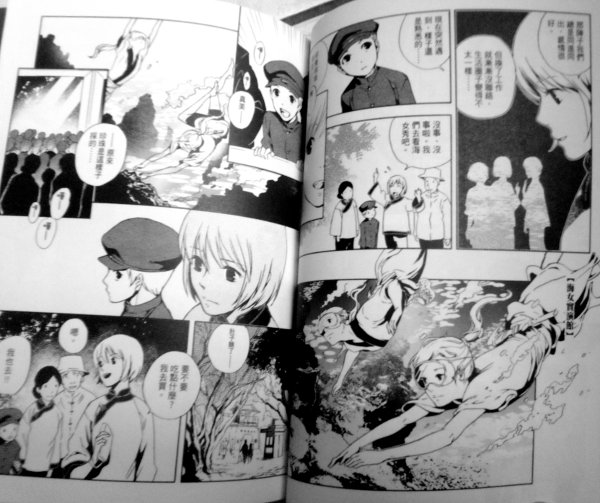 Notice how on the right the swimmers seem to dive down on to the page. Notice on the center left how there is that panel (or un-panel?) which shows just the sister, brother, and white space. If that’s not a visual pause, I don’t know what is.

But I think one of the things I like most about Akru’s artwork is that she can make the ordinary seem wonderous. For example, the act of reading: 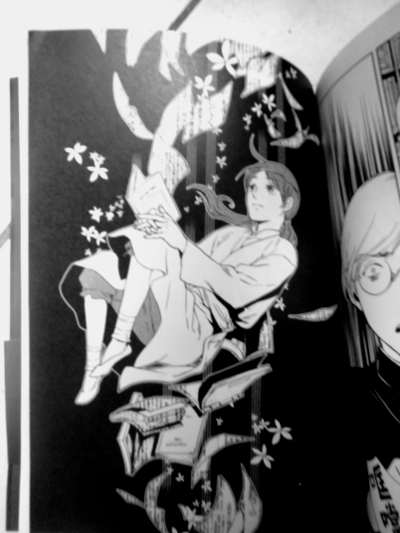 Well, it’s not available in English. I think that’s too bad. I think that if any digital comics publisher showed an interest in licensing manhua, this would be a good choice—since it’s just one volume, it can’t be that great of an economic risk. Alternatively, since Creative Comics Collection is partially non-profit, it might be nice if they put forth a free English version online to promote Taiwanese culture.

The theme which binds all of these stories is that one has to step outside one’s comfort zone to really get to know the world. It might mean a boy from a rural town who visits the big city for the time, it might mean an Atayal girl who leaves her village to learn reading, writing, and Japanese, is might mean a young man from Japan who comes to Taiwan to open a cafe … and it just might mean a Manga Bookshelf reader moving from the city where she grew up to the other side of the Pacific Ocean. 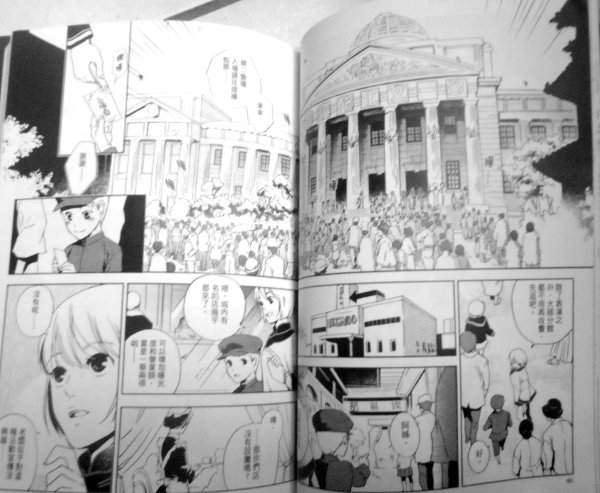 This building is still around, in fact, I have spent a *lot* of time around this building.

No, seriously. The first and the last stories are set in they very same neighborhood that I lived in when I first moved to Taiwan. Okay, so I was there more than 70 years later, but still. I lived in a Japanese era building. I wandered the same streets the characters wandered, and the Japanese era left a very strong mark on the area. In fact, the same neighborhood is shown in Cheerful Wind.

Sara K. is participating in this month’s Carnival of Aces. You can find her first post here … and yes, it just happens to be about a certain Chinese-language novel which she has previously discussed at Manga Bookshelf.