MICHELLE: Hey, check it out! It hasn’t been a whole year and we’re totally back again!

MELINDA: It’s a Christmas miracle! Or something.

MICHELLE: It must be! This week there’s one debut that we both read—shall we start with that one? Would you like to do the summarizing honors, or shall I?

MELINDA: I’ll give it a try! 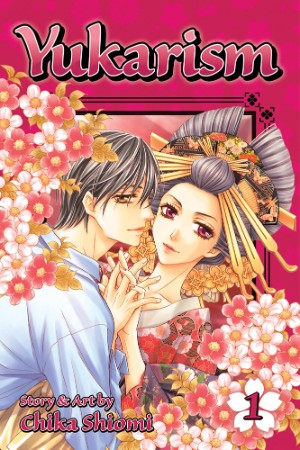 This week, we both dug into the first volume of Yukarism, the latest from Chika Shiomi, author of Yurara and Rasetsu. The story centers around Yukari, a seventeen-year-old boy who, according to a fortune-teller, was born without forgetting his previous life. The fortune-teller seems to have been on to something, as Yukari has such a strong sense of Japan’s Edo period that he’s been able to write numerous historical novels set in that period without any research at all. But though Yukari is keenly aware that he has this uncanny sense for the past, the details only begin to come together for him when he meets a classmate named Mahoro, whose chance presence in his life awakens his full memories, sending him back in a dreamlike state to his previous life as an oiran in the pleasure district, and even to the scene of his death.

As this is a short series—complete in four volumes—we ought to get resolution to the low-key mystery of that death in a fairly straightforward fashion. Already there is a suspect in Takamura, one of Yumurasaki’s (the oiran) customers, who is pretty creepy and known to wield his curse-making talents as an assassin. As the volume concludes, it seems likely we have met his present-day incarnation as well, though I don’t get much sense of our present-day characters in peril.

Initially, I would’ve said I didn’t get much sense of our present-day characters at all, but once the reincarnation of Hitoha, Yumurasaki’s attendant, showed up, Mahoro did start acting a little more lively. It does seem, though, that in this first volume at least, the priority was on establishing the concept.

MELINDA: I’m find that I’m both distressed and pleased to hear that this series is complete in four volumes. On one hand, I applaud succinct storytelling when done well, and I do have a lot of faith in this artist. On the other, if it indeed is done well, I’ll be very sad to see it go. So far, I’m feeling optimistic, though I’ll agree that the present-day characters are less distinct at this point than their past-life counterparts, but as you say, that begins to ramp up a bit near the end of the volume. One exception on that front, however, is Yukari, at least in my opinion. His character is fairly well-established (and nicely linked) in both the past and present, and I do appreciate the way he so easily falls into his former self. He and Yumurasaki are so clearly the same person at the core, and this is only enhanced by Shiomi’s efficient yet expressive art style.

While this volume is mainly setup, it does set things up pretty clearly, at least. I suspect we’ll discover soon just why these people have been brought back together in this time period, and perhaps even why they’re so easily able to reconnect with their past selves. I’m quite looking forward to it.

MICHELLE: I absolutely agree about Yukari and Yumurasaki clearly being the same. It’s Mahoro who seems so different from her past self that it’s puzzling. Maybe Yukari’s wrong about who she really is? That’s an intriguing possibility. In any case, I am definitely on board for the rest of the series!

MELINDA: I suspect there’s a lot more to Mahoro (and her past self) than we yet know! And yes, I’m definitely on board for finding out!

So what else have you been reading lately?

MICHELLE: I actually checked out another Shojo Beat debut from VIZ, Kiss of the Rose Princess by Aya Shouoto! 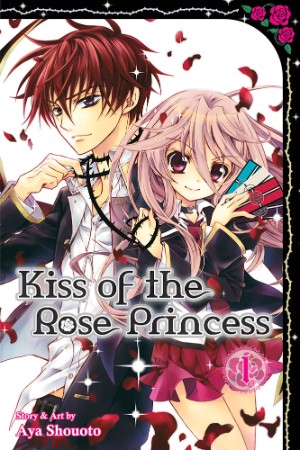 This nine-volume series is about a girl called Anise Yamamoto who was given a choker by her father with the warning, “If you ever remove it, a truly terrifying punishment will befall you.” She duly wears it until one day a bat-like creature flies into her. The choker disappears, but in its place is a card. By kissing it, she can summon Kaede, her hot-headed classmate. Turns out she’s some sort of sovereign that has knights at her disposal. Instead of Anise going around collecting the rest of the cards, the bat (Ninufa) just gives them to her, so now she has four bishounen at her beck and call. Anise wisely wonders, “This isn’t punishment, is it?”

In addition to Kaede, there’s the princely student body president, a grumpy goth dude (who is apparently not quite human), and a frail and delicate boy. Supposedly, the power of the cards was sealed until a demon lord resurfaces, only he hasn’t yet, so… What is this story going to be? Is it a comedy? The reveal of the president’s masochistic predilections is played for laughs. Will the demon lord ever show up, or are we in for more stories with plots like “we’ll work together as a team to create a new main gate for the school festival”? I honestly don’t know what to make of this one.

Ultimately, I suppose I will read more in the hope that this will possibly turn out not to be something generic.

MELINDA: Right now, I feel like I’m reading some kind of alternate universe reboot of Cardcaptor Sakura. Am I wrong?

MICHELLE: I can see how you’d think that, and it is true that each knight supposedly has a different specialty (attacks, discovery, alchemy…), but because she isn’t compelled to collect more cards or go up against an enemy, Anise isn’t actually using these cards the same way Sakura does, and it’s much less compelling so far. That said, volume two has just come out, so perhaps that’ll give me a better idea of the direction in which the series is heading.

What else have you been reading? 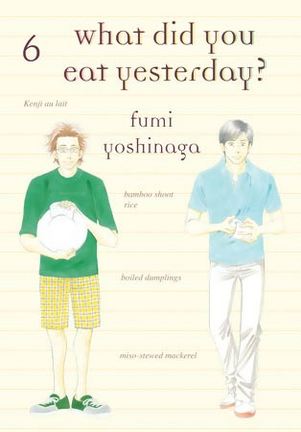 MELINDA: I’ve finally now caught up on the latest volumes of one of my favorite series, Fumi Yoshinaga’s What Did You Eat Yesterday?, specifically volumes five and six. I suppose it’s a testament to my harried life that I would have let more than one volume of this series linger in my to-read pile, but it’s also telling that when I have real time to sit down and read, this is the series I choose first.

Something I’m always struck by when I read this manga is just how well Fumi Yoshinaga’s style works with this foodie/slice-of-life mix. Her sense of humor and ability to infuse casual anecdotes with real relationship-building makes the storytelling feel substantial even when so much page time goes to food preparation. With that in mind, there’s quite a bit going on over the course of these two volumes, but perhaps the most significant bits of the storyline have to do with Shiro and Kenji’s new acquaintance with another couple, Mr. Kohinata and his younger boyfriend, Wataru.

Shiro is originally introduced to Mr. Kohinata by Mr. Tominaga, the husband of the woman with whom Shiro often splits groceries. Though both Shiro and Mr. Kohinata recognize the absurdity of the introduction (Mr. Tominaga seems to believe they’ll naturally have lots in common simply because they are both gay), they actually do strike up a friendly acquaintance, and soon the two couples are having dinner together and meeting up to watch Mr. Kohinata’s company baseball game. There’s a lot of humor involved, but the real significance of this new friendship is in the way it influences Shiro to begin feeling more comfortable as part of a gay couple in public. By the end of volume six, he’s even invited Kenji to go grocery shopping with him in their own neighborhood, which may seem like a small thing, but is a pretty big deal for Shiro—a fact that does not elude Kenji in the slightest.

I often see comments here from readers who dislike Shiro, and I admit that I really don’t understand it at all. Yes, he’s emotionally reticent, and yes, his professional life is a complication in terms of how open he feels he can be in his personal life. But he expresses his caring for Kenji in so many ways—and vice-versa. I am pretty deeply in love with their relationship and the ways in which they continuously learn to work around each other’s fears and insecurities in order to continue to support each other, emotionally and otherwise.

Also, the food. THE FOOD. I get so hungry when I read this manga. It’s a good thing I have a cooking-savvy husband of my own. How do I relate to Kenji? Let me count the ways.

MICHELLE: I am with you on being baffled that anyone would dislike Shiro! I would challenge those folks to read through the end of volume six, which not only includes the public grocery-shopping invitation but the real reason for Shiro’s intense frugality, and see how they feel about him then. He may not be demonstrative, but he really does care, and is thinking of Kenji’s long-term health and happiness.

It’s interesting how my reaction to the food works, because if it’s something unfamiliar, I kind of go, “Oh, that looks tasty,” but if it’s something known and delicious, then I will become a slavering craving-beast. Latest trigger? Gyoza!

MELINDA: Yum! Though of course that seems to be my reaction to everything they eat in this series. Now… time for some lunch!

MICHELLE: Suddenly, this Stouffer’s frozen entrée is not looking up to par.

MELINDA: I feel that.